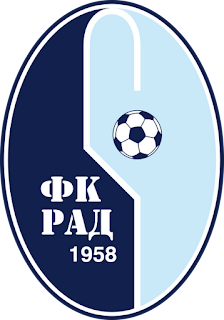 As an added extra a brief report on two other grounds in the Belgrade area. Firstly FK Rad who are a Serbian Super Liga club that play at the Stadion Petar 1 or more commonly known as simply the Rad Stadium. Being a two horse race seldom is any attention given FK Rad or other Serbian clubs outside the boundaries of Serbia.
With a capacity of just 6000 I asked my Serbian friend how the hell did he obtain tickets for games with Red Star or Partizan. He simply replied that the mad reputation of Rad supporters meant that many away fans are deterred from going due to the fanaticism of the home crowd !
A rather surprised and proud caretaker was only too happy to show us around and I took a few photos. Compared to some of the other stadia around Belgrade Rad is in a relatively good condition when compared to others like OFK ( see link http://sacuvajmoomladinskistadion.blogspot.ca/2010/09/blog-post.html )