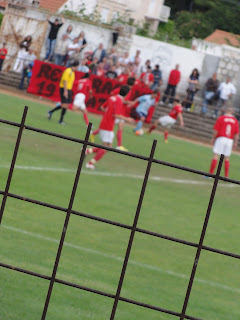 Across a busy road,an old, football graffiti scrawled wall conceals the ground of GOŠK Dubrovnik. A worn open bowl like stadium with few facilities and crumbling terraces. Behind lies a striking back drop of mountains, palm trees, open sky and the Tudjman suspension bridge beyond. A nostalgic trip back into the Yugoslavia days when such lower league grounds were prevalent throughout the old Republics. For all it's obvious decay and look of abandonment it retains heaps of character and a refreshing change from the modern sterile stadia seen throughout Europe. 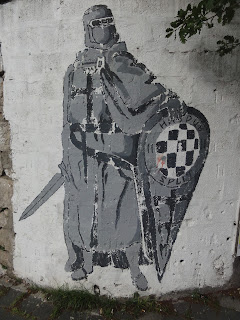 Dubrovnik itself is often described as the pearl of the Adriatic and it's clear to see why. A magnificent medieval walled town with distinctive red tiled roofs and beautiful churches. Located perfectly in an area of breath taking coastline scenery, it is a magnet for weekend tourists, millionaires and a conveyor belt of cruise ships. 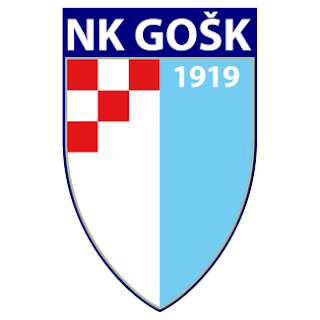 At the beginning of the holiday season, thousands upon thousands parade through it's narrow streets and clamber up and down the impressive surrounding walls. Usually by late afternoon thankfully many return back to the cruise ships, leaving a period of calm as the evening draws in. Then a quiet, leisurely stroll through the main parade to the harbour followed by a seafood meal can be a heavenly experience.

Laying in the same area where the tourist ships dock on a daily basis, the football ground looks as ancient as the old town only more dilapidated. Were it not for the noise of the small crowd over the surrounding wall, few would know that a football ground is there.

Today is a top of the table clash as Dubrovnik take on Zmaj Blato, both pushing for promotion with only two games left. Suitably two groups of noisy adolescent ultras had gathered next to each other while the rest of the ground had a mixture of young and old alike. 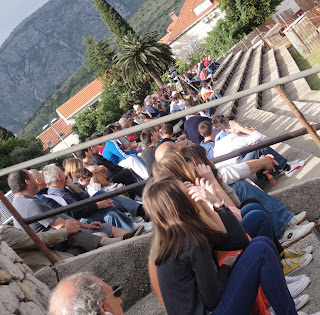 Typically for such a game where the stakes were high, it became a game of chess. Encouraged by their fans, Blato nicknamed the Red Dragons took control of the first 20 minutes although goal scoring opportunities were rare. With the Dubrovnik ultras letting off a series of choking smoke bombs, it was ironically a case of all smoke and no fire as they struggled to get to the grips with the away side.

Even when gradually the roles were reversed all possession took place mainly in the midfield areas with one or two nondescript forages into enemy territory. Mysteriously the Blato keeper had a policy of directing his goal kicks straight to the opposing keeper or launching balls wastefully out of play. 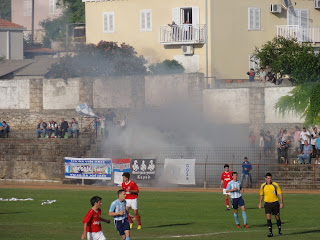 At the interval a procession of the younger fans made for the exits for a visit to the local shop returning moments later with crisps and cans of coke. Strangely after the break the Red Dragon ultras probably frustrated with the state of play defected to the ranks of the opposing ultras.

Even when gifted with goal scoring opportunities both sides squandered their chances and it seemed the match was destined for a goalless draw. However miraculously with only minutes left the home side were able to produce a moment of quality, so far lacking until now and slot the ball into the opponents net. 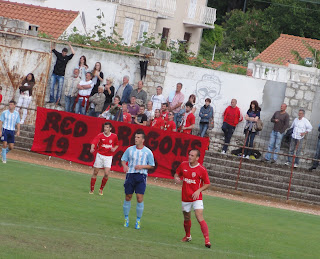 The win virtually seals Dubrovniks's promotion to the second level of the Croatian league and the crowd and players acted accordingly with a rapturous celebration of cheers, smoke bombs and fire crackers.

Cost of admission. Free
The Gradski Stadion although worn and tired gets 8 out of 10 for nostalgia and character.
No match programme.
Sadly no floodlights too 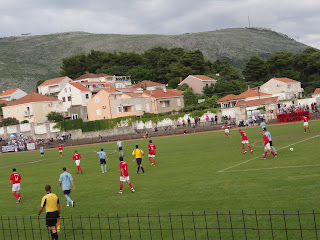 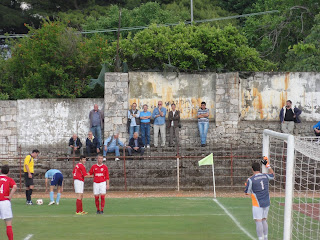 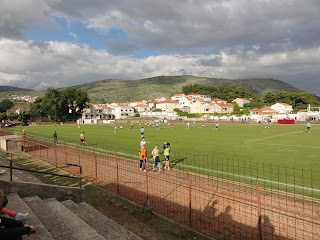 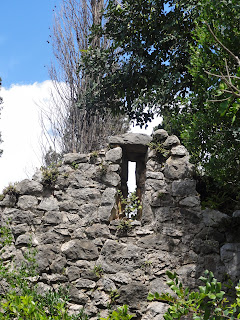