THE MEN IN BLACK

'' There must be some speculation as to whether opposition teams were intimidated at the prospect of playing men intent on the violent overthrow of all governments. One can only guess that fearful officials carried out stringent checks that the dockyard revolutionaries were not armed or that the ball didn't have a fuse !  '' 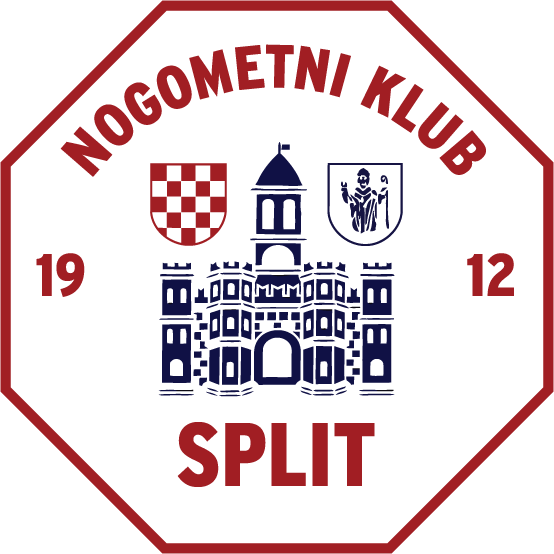 Long before Johnny Cash or the Stranglers were rebelling against society through their music another group of men in black were protesting against terrible living conditions and poor wages through a local football club.

Spawned from the working class area of the dockyards of Split, Croatia, HRSD Anarch ( Croatian workmen's sports society, Anarchy ) were formed in 1912 as a voice for the surrounding community and appropriately dressed in an all black strip, the colour of the Anarchists. 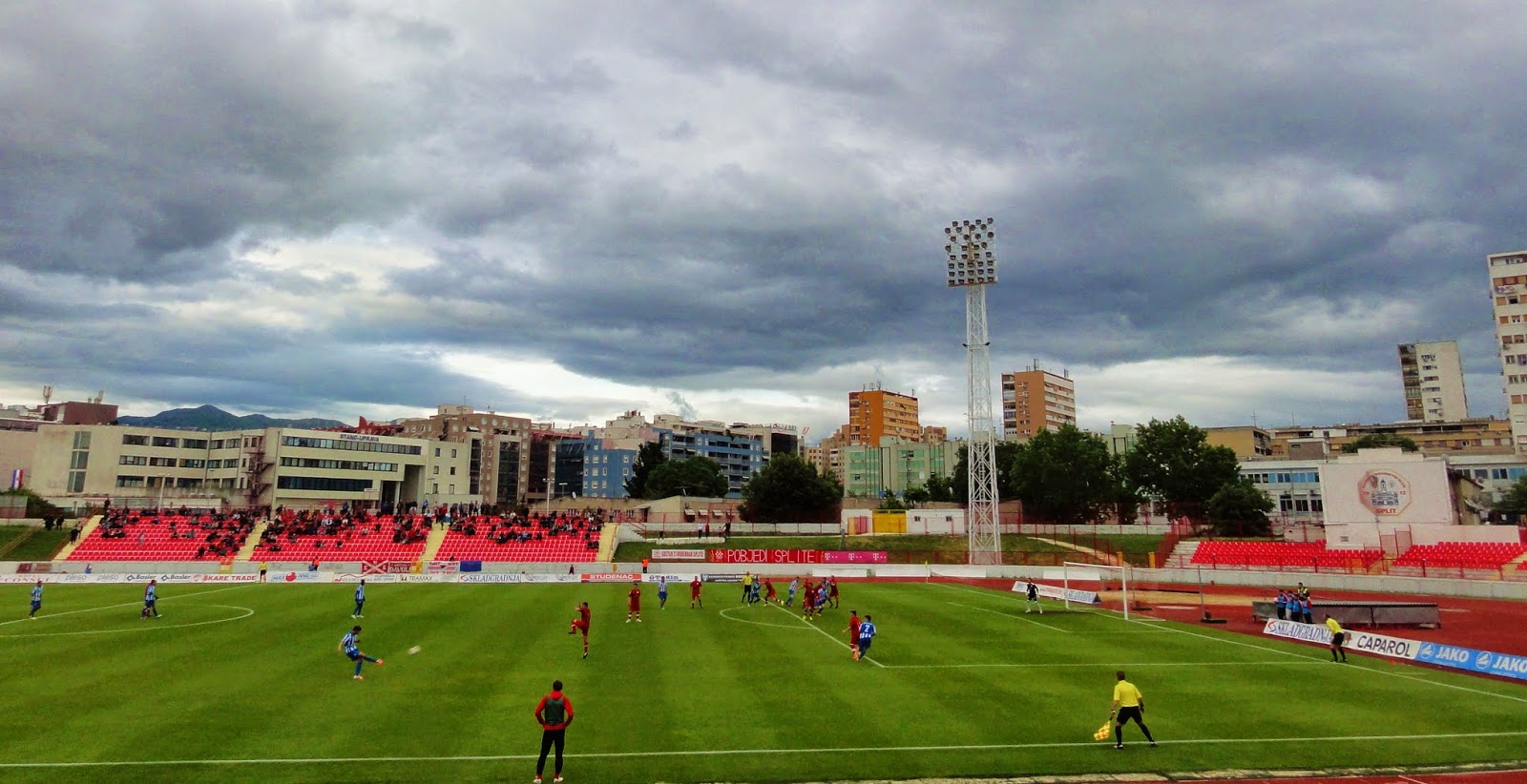 There must be some speculation as to whether opposition teams were intimidated at the prospect of playing men intent on the violent overthrow of all governments. One can only guess that fearful officials carried out stringent checks that the dockyard revolutionaries were not armed or that the ball didn't have a fuse !

Always in the shadow of their more illustrious neighbour Hajduk, the eleven angry young men from the shipyards of Split performed in the lower levels of the Croatian league without much distinction. With the state of Croatia assimilated into a greater Kingdom of Yugoslavia after the first world war, the club through government interference was forced to change it's name from Anarch to several more political acceptable titles including Arsenal, Borac and JNSK Jug.

Anarchism and regulated football were never great bed mates and by 1933 the political ideology of the club had sensibly switched to the emerging Yugoslav socialist movement of the Partisans and it's leader Marshall Tito. A change in name to RNK Split also meant unfortunately that the team lost their distinctive all black kit to a more  politically favoured communist red.

In 1936 keeping with the radical ideology of the club a unsuccessful expedition of volunteers were sent to Spain during the civil war to fight on the side of the Republicans. This trend was continued a few years later during World War II when 120 members of RNK Split lost their lives fighting for Tito's Partisans against Nazi and Italian occupation. 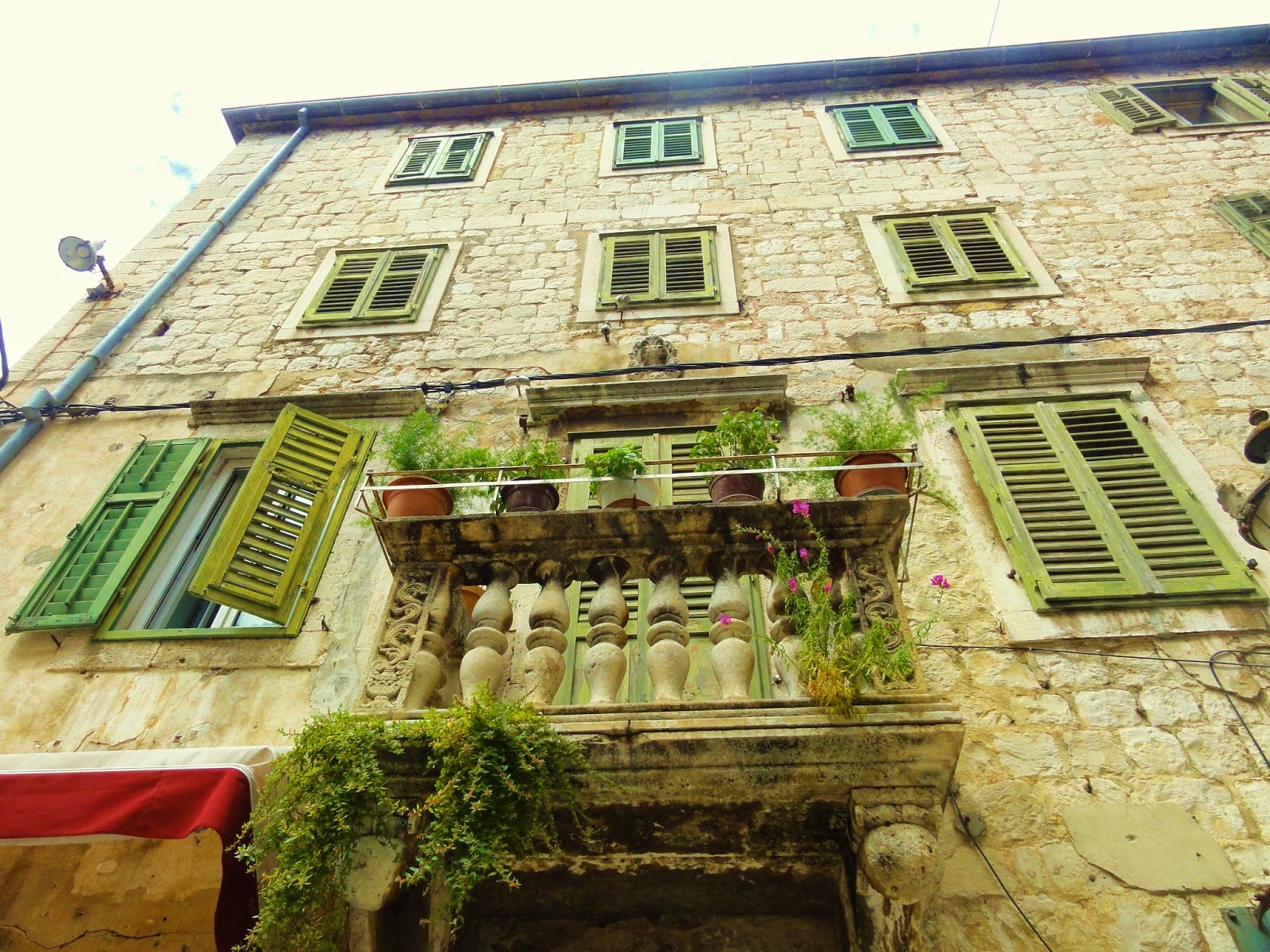 Their heroic deeds and radical history were favourably recognised by the communist authorities and RNK Split ( and Tito's favourites Hajduk ) were one of the few main clubs throughout the federation not to be disbanded. Usually historical clubs in the view of the government conjured up images of pre-Yugoslav nationalism and were a threat to the new ideology of brotherhood and unity.

Now under a Yugoslav socialist federation, by 1950 RNK had progressed to the top tier of the football league but still struggled to escape the greater influence of Hajduk. Gradually there was again a period of gradual decline and throughout the 60s and 70s the club found themselves back in the lower levels of the Yugoslavian leagues. 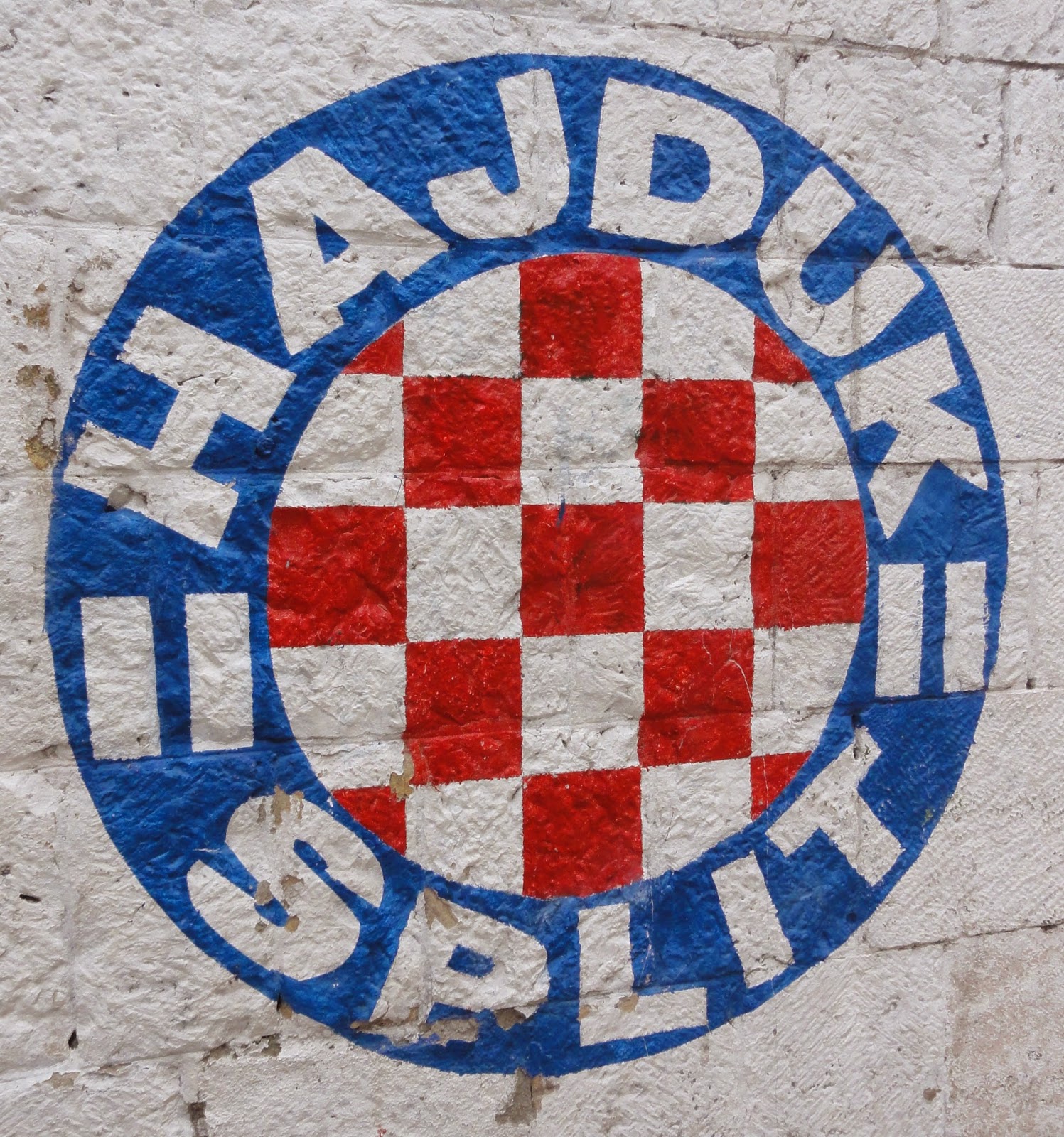 In 1979 their ground the 4000 capacity Stadion Park mladeži inherited Hajduks old floodlights from the Stari Plac ( old park ) stadium due to their prestigious neighbours move to their current home, The Poljud.
A symbolic hand me down to it's smaller brother, a relationship for the people of Split that still exists to the present day.

After Croatian independence the country due to the civil war took on a fiercely nationalistic tone not in line with the radical leftist history and traditions of RNK. Although despised in Croatia by some fans of other clubs, within the city of Split they are sometimes frowned upon but also tolerated and fondly respected. 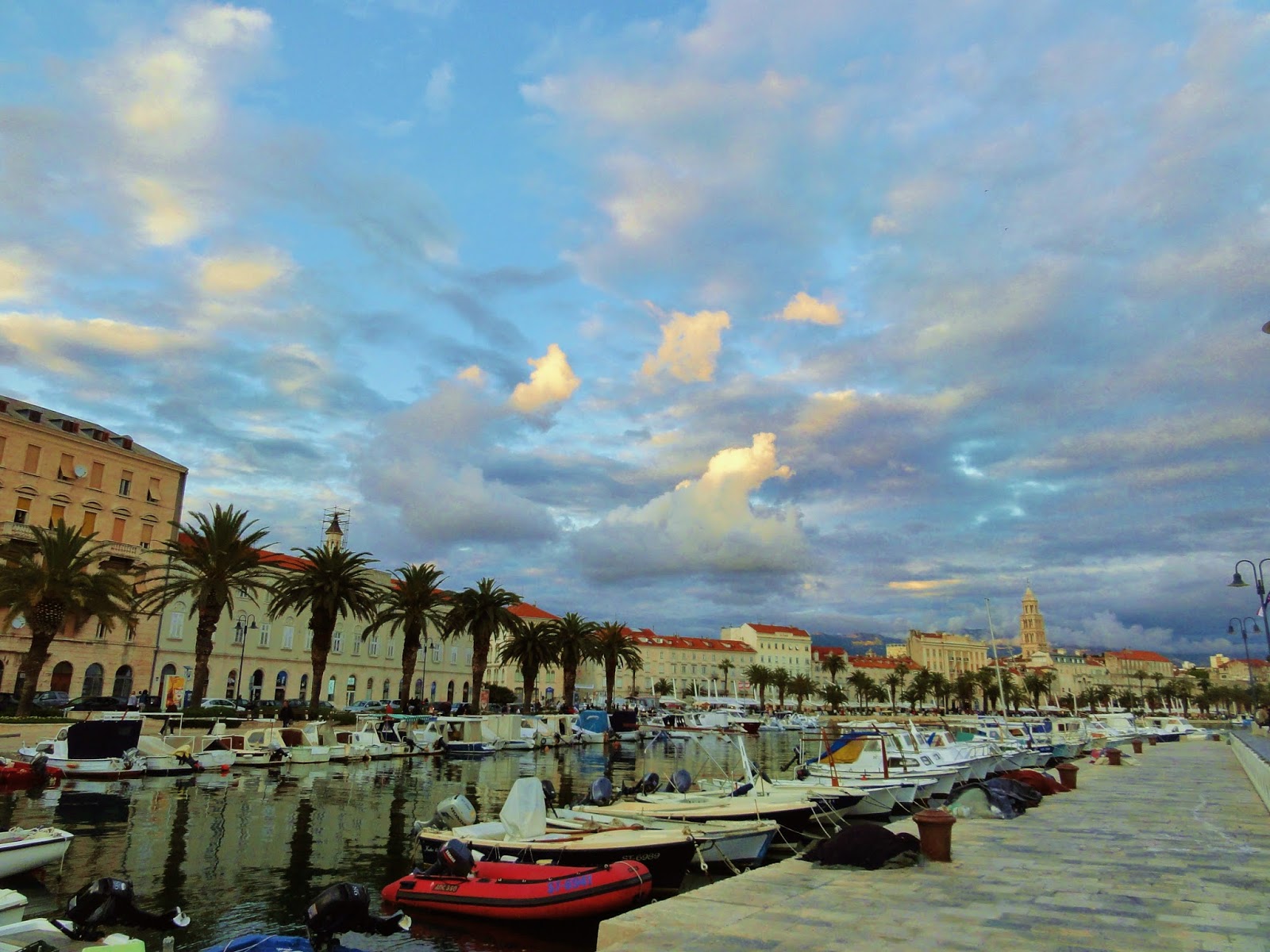 Their yo-yo traditions continued when in the late 90s RNK Split were declared bankrupt and duly demoted to the fourth tier of Croatian soccer. Miraculously with four promotions consecutively from 2008, the reds found themselves back in Croatian 1st league. They continued the momentum in top flight and by the end of their first season finished an astonishing third in the table ( just two points behind city rivals Hajduk ).

.This position meant they qualified for the 2010 Europa league and after a respectable victory against Slovenian club NK Domžale, Split were eventually knocked out 2, 0 in the second round by Fulham

.
What makes this rise even more remarkable is that RNK have managed to find any foothold in a city indoctrinated with the cult of Hajduk. While most towns have to endure the ugly football graffiti of frustrated juveniles, here elaborate pieces of art are officially welcomed by the civil authorities.From giant Hajduk murals to cartons of milk, it is a brand that seems to be absolutely everywhere and on almost everything 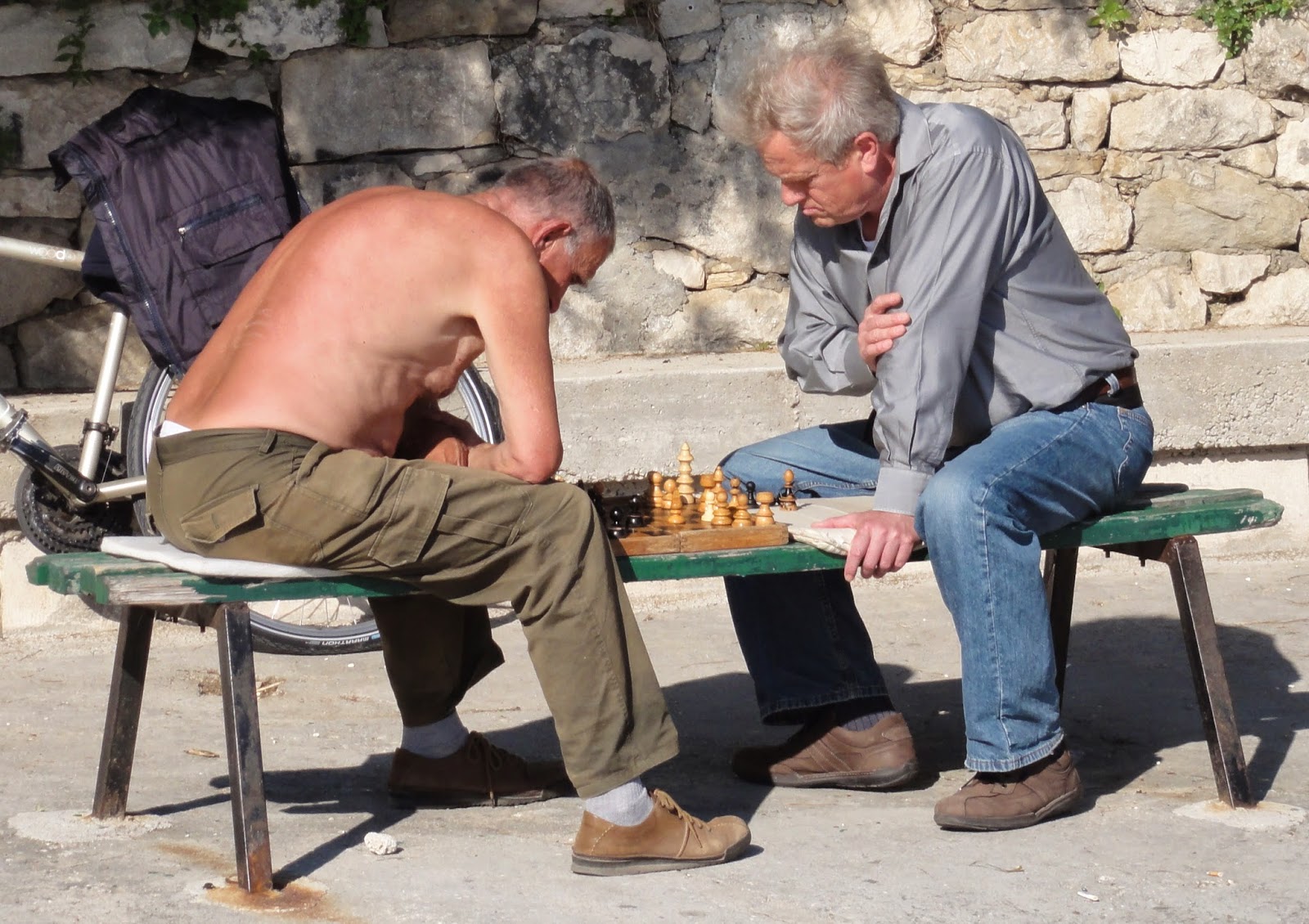 .
Considering the fact that a Europa spot was up for grabs, tonight's season finale match needed the extra incentive of free admission to attract any interest. Combined with the fact that the cities beloved number one darlings, Hadjuk were playing Dinamo the following day in Zagreb ( eventually abandoned due to offensive singing ) it was another uphill struggle for RNK to escape the shadow of it's famous neighbour.

A small downpour before kick off also hampered the clubs need for adequate support and the signs looked ominous when half an hour before the start only a handful of people had turned up. The Stadion Park mladeži  although the second largest stadium in Split is a basic ground with only limited cover for the executives and media. 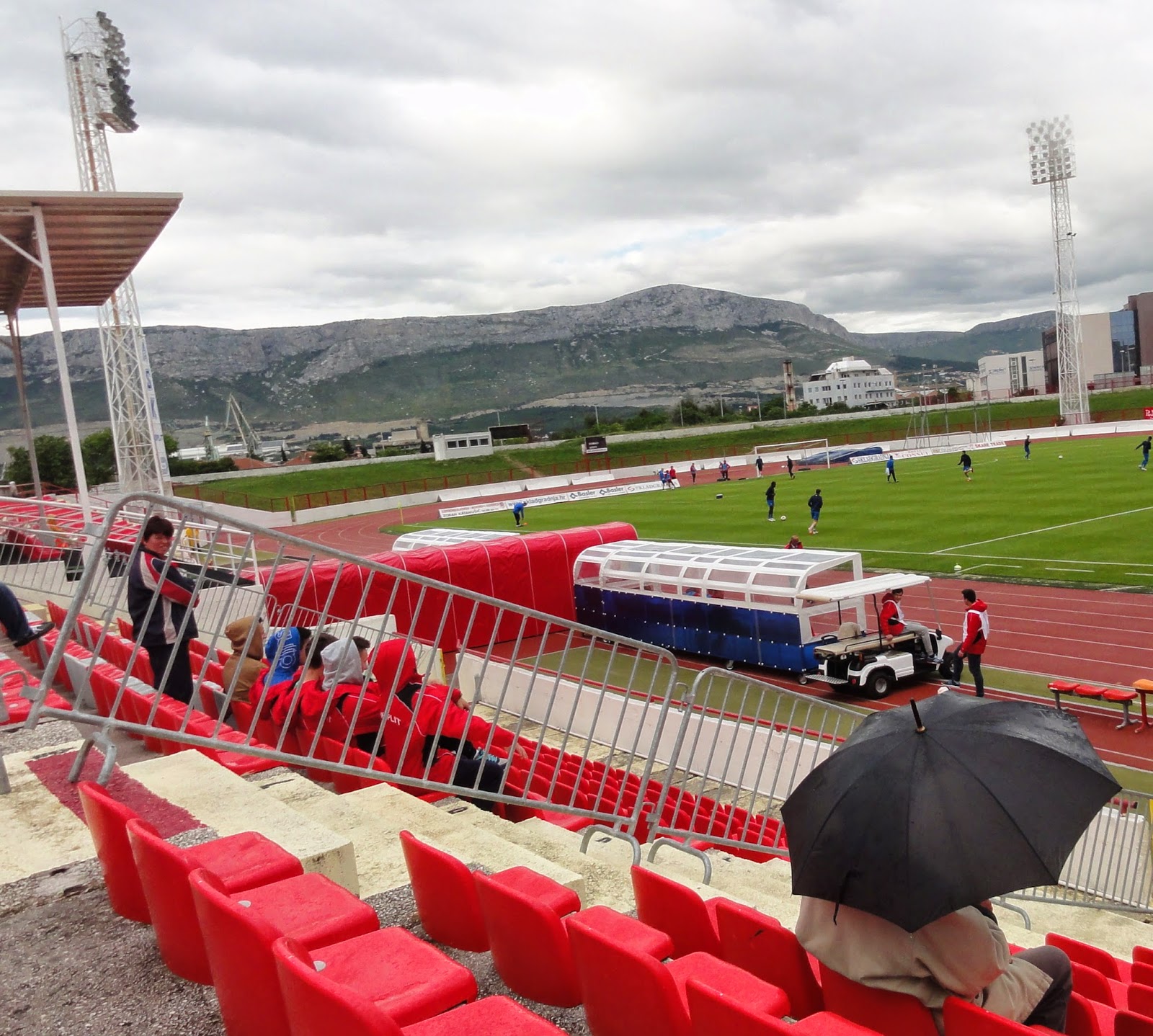 It is situated near to the clubs spiritual home of the docklands in view just beyond added with some stunning sweeping mountains behind. Closely hugging the stadium is the urban buildings of the city evidence that even an ordinary football ground in Croatia such as the Stadion Park mladeži in all probability have some of the most stunning backdrops on the planet. 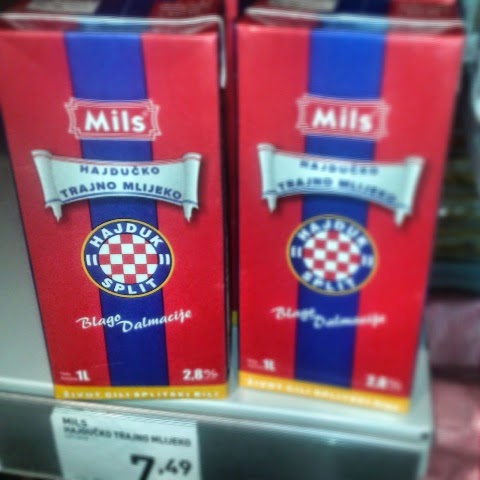 Thankfully a greater proportion of fans turned up a few minutes before the start although clearly club allegiances were under question. Sitting on Hadjuk plastic cushions, wearing Hajdul shirts and Hajduk flip flops they sat down and awaited the free entertainment. Opposite the main stand Splits most loyal fans hung banners to the fencing and waved the customary club flags. Interestingly one displayed a giant letter a in a circle, the sign of the anarchists. 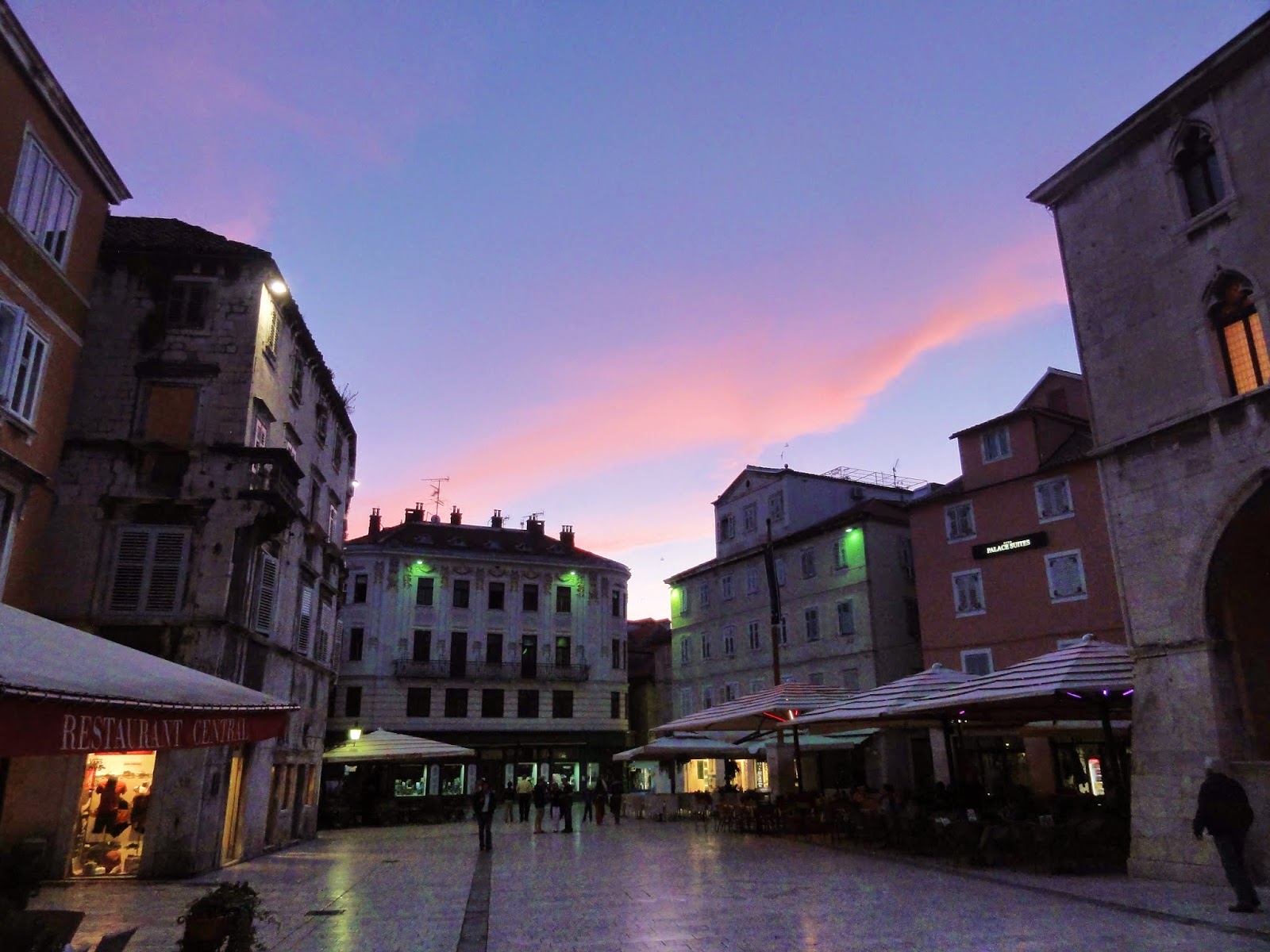 With 63 minutes played the home side struck first with a goal by veteran striker Mate Bilić. With a superior goal difference RNK required just a draw while the opponents from the capital needed the victory.
The second half was a cagey affair with both sides desperate not to commit any mistakes but Lokomotiv needing a victory pushed more men forward as the game went on.

Their efforts were rewarded when Ante Budimir scored with six minutes to go. It left for an exciting finale to to a somewhat dire match although the home side did everything to disrupt the last few minutes through a series of dubious injuries. 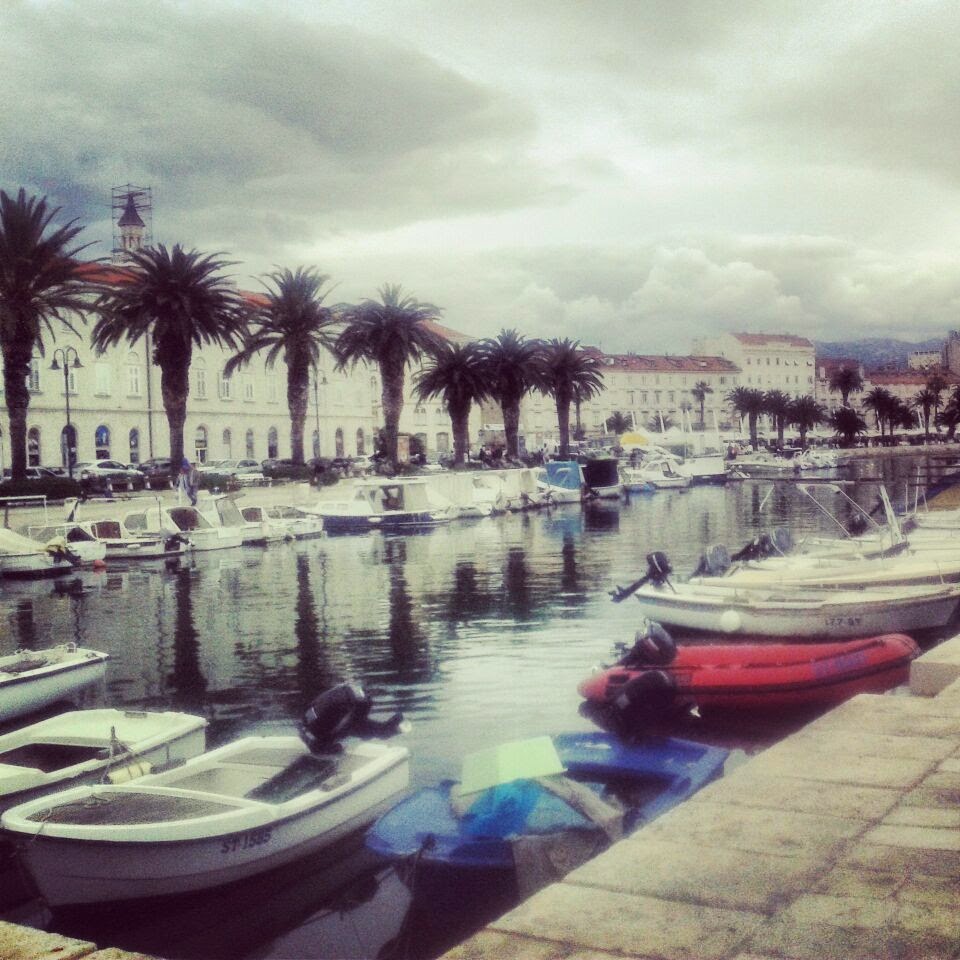 RNK held on and will again represent their country in the Europa qualifiers in August. No small feat for a club started by some angry men and currently maintaining a foothold in it's nations top league.
Anarchy in the RNK indeed !

Stadion Park mladeži gets a 7 out of 10. Simple, lacking modern facilities and having the dreaded athletics track is a negative but it does however have pedigree in its history and Hajduk's discarded floodlights.
No programme.

Seen from an elivated position, the Stadion Park mladeži can be seen to the right of the photo ( two floodlights ) just between the row of blocks. The dockyards Split's spiritual home lie just beyond. 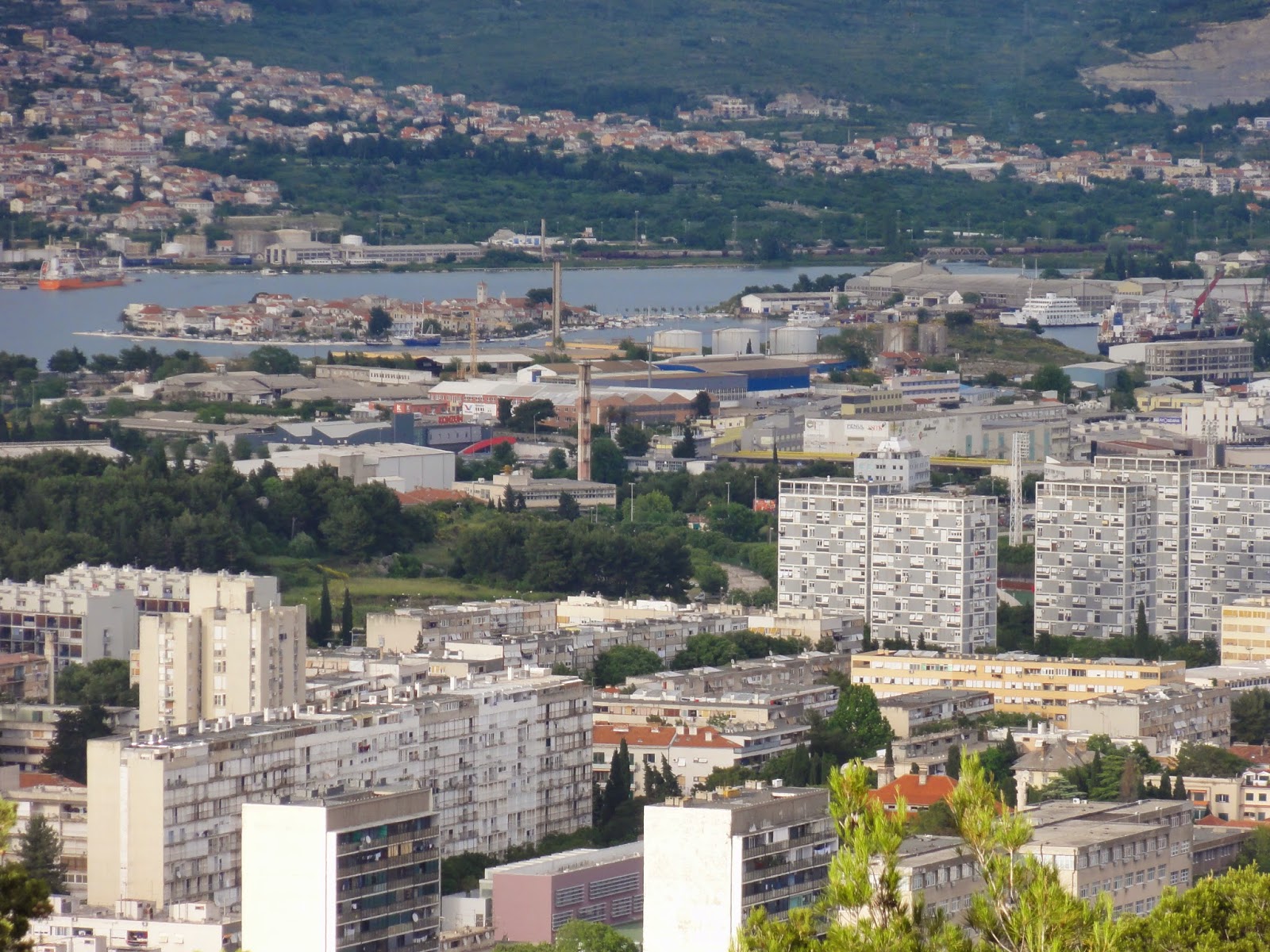 Mentioned before and probably again is the Balkan staple fast food burek. Usually either a meat or cheese variety, burek is a greasy, filling and cheap delight sold in most bakeries across the city.
Breakfast options include a side order of yoghurt. 8 out of 10 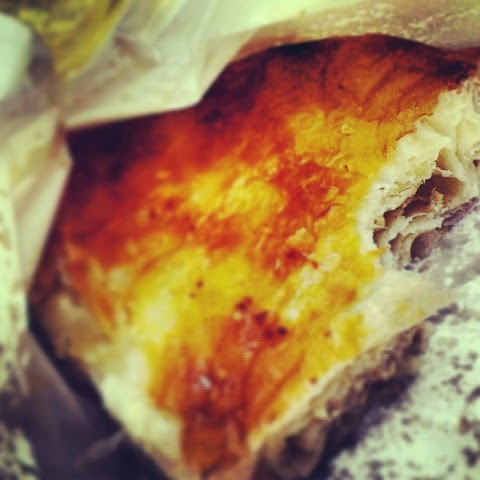