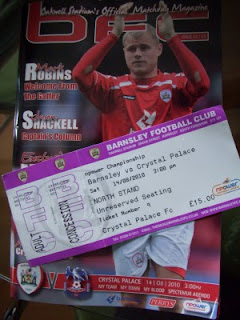 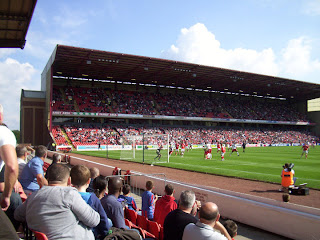 A trip to Barnsley with a friend over from Australia completely ruined (apart from the score) by a 'jobs-worth' rail inspector who insisted we pay a £50 fine for being on an empty train 20 minutes later than the one I booked ( thank you East Midlands rail, thanks a lot ). Let that be a lesson to those of you who take advantage of discounted rail fares by booking early. You will receive no sympathy for missing your allocated train even if the reason is beyond your control. Expect threats of calling the police if you don't pay up and being escorted off the train and thrown into a cell miles away from your station ( and probably have to pay for the ticket home too !).

There is obviously an industry policy to accept no excuses to increase company profits and to make things worse all carried out by employees that really enjoy their position of power. Nothing would of given me more pleasure than to wipe that smirk off his face but that would of just added to his sense of self importance. I normally give myself ample time to get to ground early and have a little inspection of both the area and the stadium. Returning is sometimes best left to well after the main crowds have dispersed, leaving time for something to eat and usually more room on the train back.

Never the less I found Oakwell to be a rather traditional and atmospheric ground adequately covered for all supporters but just a little open to the elements. The price was £15 (a category C ticket) which for the Championship is very reasonable. Or maybe this price was simply a reflection of the overall demise of my clubs recent fortunes and their attraction to the home support in a time of economic recession.
However the locals seemed friendly enough and the noise they generated seemed far more than the 11,000 crowd that was officially announced.

A big hand has to go to the 1000 or so Palace supporters who now thankfully seem to be more interested in creating an atmosphere over the importance of winning and losing games. They realize that promising youngsters such as Wilfred Zaha are being gradually phased into the first team and even though they are by no means the finished article their efforts are at least appreciated.

With the ground 10 minutes from the station it is very easy to find and we were guided by helpful locals even though it was obvious by following the direction of the passing crowds. Seats in the away fans North Stand were comfortable enough with a good overall view and ample leg space. This did not deter the two young girls behind who were more interested in gaining attention with the crowd (mini skirts,cellulite and 'you've scored' emblazoned on the back of their knickers) by knocking their knees into the back of my head during most of the first half. A look of disapproval behind proved fruitless and only helped to magically make my chicken balti pie reappear in my throat. However the Barnsley subs warming up on the touch line found the whole spectacle very amusing and were transfixed more on the two girls than on the game ( I hope not a slur on the level of classy ladies up north ).
I seem to remember a few years back that a couple of Barnsley's then Balkan Players famously criticising the lack of attractive girls in this part of England. How fortunate that they had not witnessed this display by some of South London's finest, I'm sure they would of been more contented and happy that they had not signed for Palace. 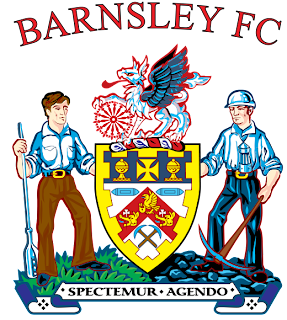 The packed two tiered East Stand to my left looked very impressive although the partially covered odd looking West Stand was deserted leaving a slight void and making the whole spectacle and Oakwell experience a little unbalanced. I'm sure had Barnsley been playing a more high profile team this would not of been the case.

A strange looking three tiered disabled structure is squeezed between the East and South Stands which is a nicely thought addition but also adds to the imbalance of Oakwell as a whole. My own thoughts are that this area could of been incorporated into another stand but it seems Barnsley are more concerned with practicalities rather than being devout disciples of feng shui.

Yet as aforementioned all were in good voice helped by the added advantage of being able to bask in the sun and enjoy a cold drink or two before the dreaded freeze to come.
All in all Oakwell was in my opinion surprisingly well suited to the comforts of the average football supporter with good facilities and so much more interesting than the modern soccer stadia that have been erected the past 10 years up and down the country. I would gladly rather come here than watch 90 minutes entrapped in a giant aluminium lampshade with no character.

As for an area report I have to confess there was no time for any sight seeing. I hope to return  one day and complete this report for any of those of you that are interested. 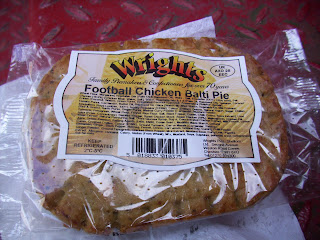 Barnsley Chicken balti pie rated at 7 out of 10