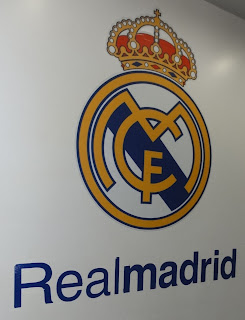 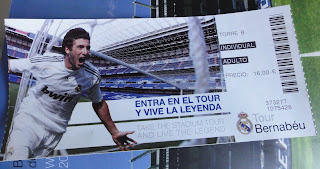 A long weekend trip to Madrid gave us the opportunity to experience what is generally regarded as the greatest domestic football match in the world, the 'clasico' Real Madrid v Barcelona.

To go into a detailed history of why these two clubs are such formidable rivals would take up an encyclopaedia  but in a few sentences this clash of the titans stems mainly from the Spanish civil war when Real Madrid indirectly represented the right wing government of General Franco and Barcelona the Catalan Republicans.

With Franco's eventual victory the Catalan population were severely oppressed including measures to ban the the Catalan language and to stamp out any regional or independent identity. F.C Barcelona became more than a football team  but a symbol of resistance against Franco's Spain with the local populace waving flags, singing and talking in their native tongue at Barcelona home matches. 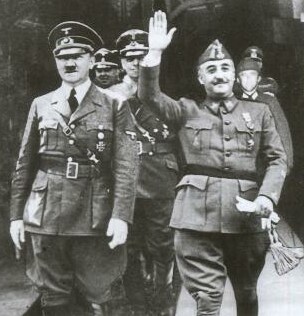 Another period of discontentment for Barcelona came when the legendary Argentinian footballer Alfredo di Stefano was due to sign for them and instead was controversially persuaded to commit himself to 'Los Blancos' instead. This began a chapter that was to be Real's greatest period in their illustrious history winning a series of domestic and European cups. It also spawned probably the greatest side of all time with such players along with di Stefano, Puskas,Gento ,Kopa and Hector Rial. 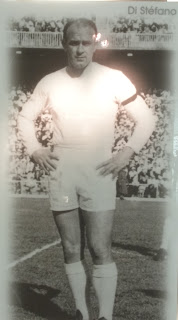 The ideological differences have become somewhat blurred over time but Barcelona remain a club owned by it's supporters and unlike most football teams refuse to have any corporate sponsorships on their shirts opting instead to promote charities. 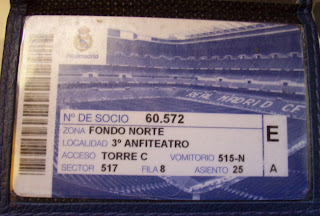 Luckily both these giants of football will face each other four times over the next few weeks which meant that the cost of a ticket to see this encounter drastically reduced as the match day approached. Having done a little research before leaving for Spain the cheapest ticket I could find was on Ebay for £420 with some tickets being advertised for £600 plus. I had set my limit to £300 and was thankful to my brother in law for finding tickets at a cost of £120 each through a tour agency selling unwanted season tickets. This also took away fears of buying off a tout at the game only to find the ticket was a forgery or invalid apparently a common practice at these events. 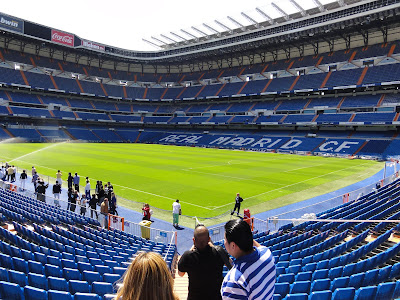 I have to confess when I first saw the Bernabeu Stadium I was a little disappointed as it seemed a bit smaller than I had imagined. Seating just over 80,000 spectators I envisaged some vast super structure that would rival the Wembley arch or Empire State building when in reality you only see it when in close proximity and not from any great distance. The reason for this would become apparent when entering the ground as the pitch is substantially below ground level and quite deceiving when viewed from outside. 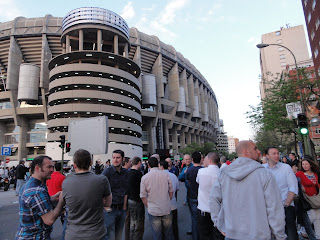 The game had a late kick off of 10.00 pm in line with Spanish culture of  long evenings and staying up till the early hours of the morning (Grandparents and kids included). Around the stadium are a number of packed bars but it was easy enough to sit down and take in the atmosphere as mainly the Real supporters began to chant some local football songs in preparation of the game.

We left with a good 30 minutes before kick off just in case we had trouble finding the seats and to experience some of the build up.
My ticket was on the third tier and as you enter the pitch area it takes your breath away as it seems so far up and the walk down to my seat was like descending a mountain it was so steep. However I was surprised at the view around the stadium as the person in front was barely in sight and the leg room was ample. Another cultural difference between the Spanish supporters and the English is their passion for nibbling sunflower seeds (rather than burgers or hot dogs), selling cushions to sit on and many of the males puffing away on big fat cigars. They are a little more less aggressive and quiet in their chanting but 80,000 supporters singing in unison blows your head off and sends a tingle down your spine.

It is also rare for Spanish supporters to travel to away games so on the minus side is there is lack of banter between the two sets of rival supporters but there were around 500 Barca fans crowded into a small section above me to the right. On the whole the Spanish are more family orientated and their football culture reflects this and it was nice to see a few Barca supporters wearing tops sitting amongst the Madrid fans in the knowledge that they were not going to be attacked or directly verbally abused unlike English football. 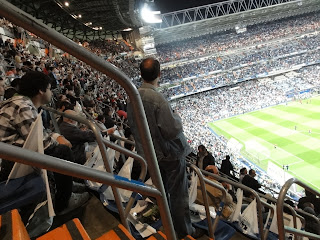 As the players entered the pitch it really put into perspective how high up you were and how big this place really is. It felt like being on a mountain looking down and being at this height it was also very cold and windy !
I really had to hang on tight as I descended the stairs and hoped that I would not tumble into some one's lap or worse to be a big red splodge on the pitch. Thankfully my seat was on the edge and I gratefully sat down quickly and took in the fantastic view and atmosphere. Everyone was given a plastic white Real flag to wave but mine remained under my seat for the entire match. 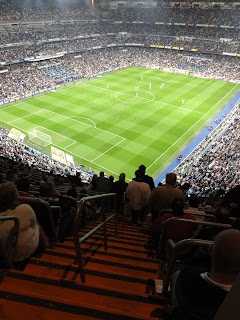 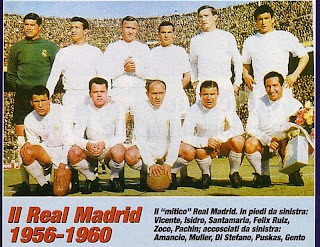 As stated before this would be the first of four encounters over a few weeks and this would be the least important for the Real fans as the Catalans are probably too far ahead in the table. Nothing but a victory would do and only in the hope that the Barcelona would then continue to drop points against minor opposition in the coming weeks. More focus would be placed on Tuesday's Copa de Rey final and the following weeks Champions league semi final. However any encounter between these two and the fans demand nothing but victory.
Messi scores to put the Catalan's one up 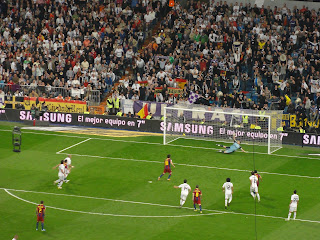 Jose Morinho has instilled his safety ethics into Madrid's football attacking elite and for most of the game Real were trying in vain to steal the ball off the Barca players and counter attack. After a penalty awarded to Barca in which Messi scored and Madrid were down to ten men, Barcelona even with the extra man advantage surprisingly played more defensive and gradually let the home side back into the game.

The second half saw more penetration from the Real forward line of Ronaldo, Alonso, Di Maria and Adebayour and it wasn't long before they too scored form a penalty and the game was destined for a much deserved stale mate. The only moment of controversy came when Lionel Messi for no apparent reason booted the ball into the Real fans and caused a brief major stir of  resentment and anger. Such a shame this incident happened in the closing moments of the game as this seemed to ignite the atmosphere. 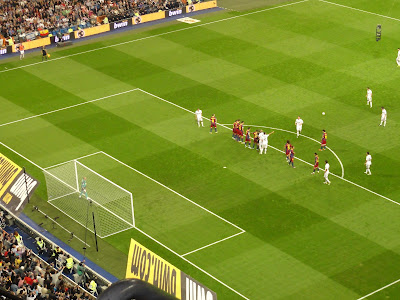 Unfortunately there will be no pie report for this game unless you want a brief description of the pleasures and annoyances of sunflower seeds (remember to peel the blighter's first). I will try and convince the Spanish of the joys of chicken balti but it will take along time before they are weaned off healthy tapas, pork scratchings and anything else to do with pig flesh.There were of course top notch food facilities selling burgers and hot dogs but these were a lot more underused than there British counter parts.

For all you beer fans remember that Spain is very generous when it comes to snacks (ta pas) and as a rule food is served with every round of drinks. I am not referring to a measly few peanuts but usually a fair good quality assortment of local specialities like paella, cheese and ham. Our small group was provided so well with food that some of us did not even bother to have dinner in the evenings. A good rule of thumb is to be polite leave a tip and keep spending your money in the same bar. If this does not work simply leave the bar you are in and find another.

Football programmes are also alien to the Spanish football fans so there was nothing to read which under the circumstances was nothing to complain about but it would of been nice to have a memento of this marvellous occasion to take home. I do however have the memories which will remain with me forever and gives me hopefully the taste to venture to other major (or minor) grounds across the world.


On the way back to the airport a few of us just had the time to revisit the Bernabeu for a quick tour of the ground. After joining the back of a huge queue it was half an hour before we got to the gates and paid 16 Euros to gain entry (40 Euros got you a meal and a direct pass into the ground).  We started at the top  after going through a quick security check travelling up a series of escalators to the panoramic platform at the top of  vast stadium. 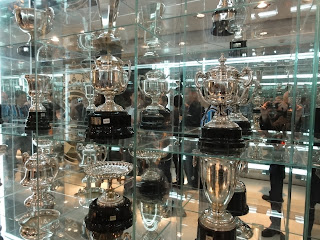 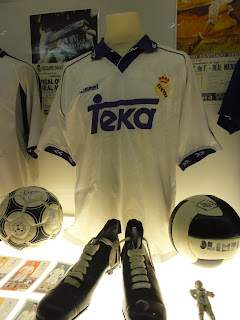 At mid level was the impressive Real Madrid museum with an array of football ( and basketball) memorabilia and a huge amount of cups from their impressive history.Particular attention was paid to such global superstars as the aforementioned di Stefano, Zidane and Puskus.

I just wish we had the time to stay a little while longer as there was so much to see and read but unfortunately we were pressed into going around at a hurried pace to catch our plane. It should take a minimum of an hour and a half but we easily completed the tour within the hour. 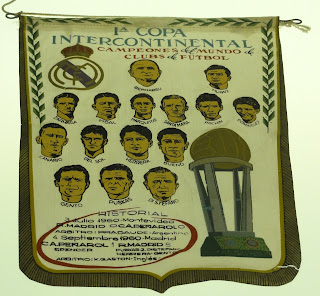 Religious Brazilian superstar Kaka has a pair of red boots that has inscribed into them the unusual quote ' Jesus in first place'. Click on the photo for a larger view. 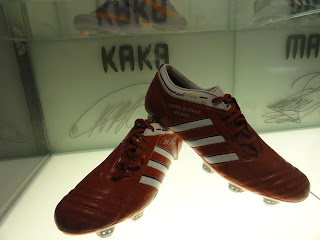 After the museum it was a small trip down to pitch level to view the changing rooms,executive areas and of course the hallowed green turf of the Bernabeu. As stated before we were in a bit of a rush so had to miss the photo opportunity of sitting (sniffing for all you Chelsea fans) in Jose's managers chair or presenting a speech at the press conference area.

The tour finishes not surprisingly in a well equipped club shop and there was a huge crowd buying all sorts of Madrid mementos and tacky knick-knacks. 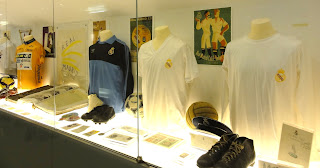 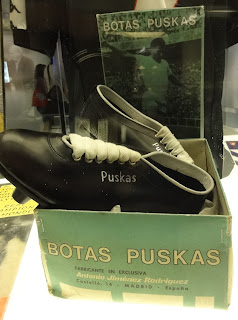 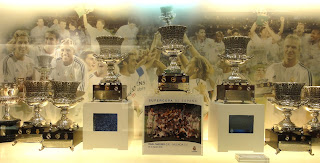