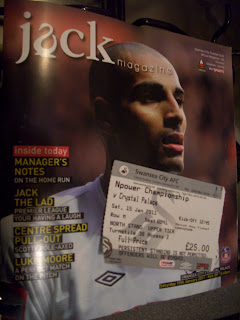 It was appropriate that the return to the land of my father's (or Grandmother's in my case ) was marred with the usual South Wales weather conditions of cold, wind and rain and a heavy beating by a far superior team on the verge of Premiership football. I have written before about my admiration for Swansea's exciting football under the leadership of Brendan Rogers and his team's passion, organisation, and above all flare.This was the type of side that the now sacked ex Palace manager (unjustly in my opinion) George Burley was trying to aspire to. With the TV cameras in attendance it was a stern test for the newly installed Eagles legend Dougie Freedman to see how his young side would perform against such dangerous opponents. 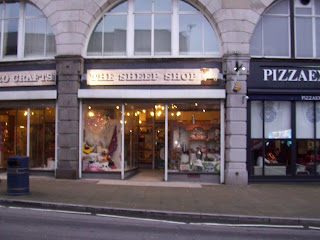 Firstly a few words about Swansea the town which unfortunately I did not have the pleasure to explore but what I saw was the expected crumbling cityscape propped up with the usual High St shop facade. There were a few places for all you culture vultures including a Swansea museum and a ruined castle near the city center but my eyes were drawn to one or two other places of interest. Firstly I spotted a SHEEP SHOP which can only be the locals taking the mickey or then again it must be fairly popular or it wouldn't survive in such demanding times. It sold not the real thing but all things wool and wonderful and an assortment of  cuddly toys for children ( I hope !).
Secondly I spotted a Welsh tartan shop which I found strange because a kilt on a Welshman would look more like a mini skirt as the much of the local male populace on the whole generally have little legs ( an infliction passed onto me through my Nan). I would like to add that before I'm inundated with hate messages from my Celtic cousins about my criticisms of Swansea that the area I live in South London is probably far worse and my only saving grace is that I can catch a tube and be out of there within 10 minutes. 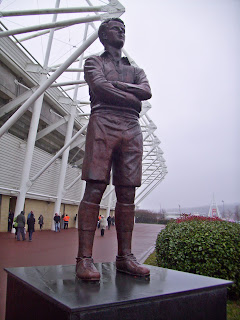 Again there was only time for a very quick train station coffee and a marathon 25 minute walk to the Liberty Stadium. However what makes up for a rather depressing and dire town is a very impressive state of the art football stadium. Yes it's one of those modern new bowl like stadiums but what I particularly liked was the amount of effort put into consideration for supporters. The leg room was enormous for a league ground and there was room to have a TV dinner and still not get up when someone passed. So nice to think the club preferred the comfort of the paying customer to the normal more bums on seats squeeze them in philosophy. Also because of the strange perspex roofing there was generally more light even on such a day as this and this I feel added to the atmosphere. I have to say that Sansea's ground was by no way as intimidating as Cardiff's old ground Ninian Park but maybe this was down to Swansea being a nicer environment.
Price of a ticket was £25 which is the norm now for most games in the Championship but value for money in such a fine stadium as this.Score for this ground would have to equal Preston's so it's a very good 8 out of 10.

The facilities were of course top notch with clean toilets and  a good selection of food and beverages.Very disappointed with there being no Chicken Baltis for which there was a sincere apology from the pie lady who stated that through there contract they only sold Peter's brand pies. Score for Peters all steak pie 6 out of 10. 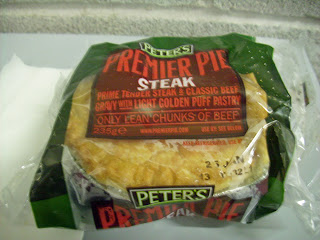 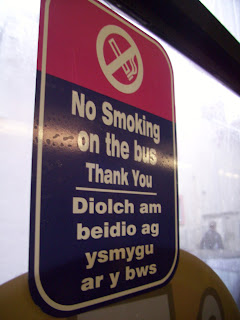 The Swansea programe too was the normal £3.00 filled with a good selection of player profiles, photos, local football news and plenty of focus on Palace for us away fans in need of a good read.
Back to the game which was as stated before a difficult test for Dougie's young Palace side trying desperately to escape from the dreaded relegation zone. To put it bluntly they were totally outclassed in all departments and the score flattered the away team as Swansea could of scored a few more. Poor old Palace could hardly muster a few passes and their attempts on goal were few and far between. It will be interesting in these desperate times to see if Freedman sticks to Burley's brand of attractive, flare  football or whether he sacrifices it for a more direct style of play. Chances are if they continue in this vain then it is only a matter of time before they head for the oblivion of League 1 and a 10 second showing on the BBC football league show. I only hope that some of the impatient twits that support this club will give Freedman a chance and not hound him out of the job or put pressure on the chairmen to terminate his services. The squad is simply not quite good enough full of very young and talented individuals not yet quite ready for the aggression and physical endurance of the Championship. 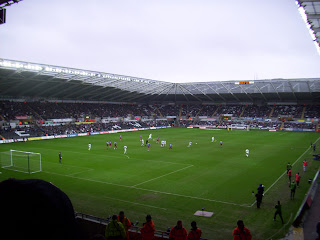 The Palace fans were fantastic throughout the entire game and helped to make a good atmosphere on such a miserable day. In one part of the match a Swansea player lay injured and a poor rather large Welsh female physio had to run onto the pitch. She had to endure a barrage of chants including 'That's why you shag the sheep,that's why you shag the sheep' to which even the Swansea fans found fairly amusing.