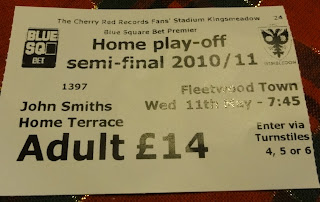 'The Don's dominated the game straight from the from kick off launching a predictable long high ball into the Fleetwood goal area and scoring in the first few seconds.' 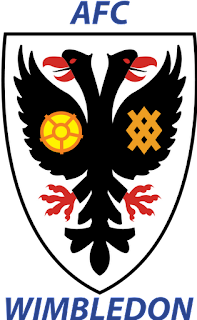 The supporters of Wimbledon have endured a roller coaster ride since their rapid rise from the depths of non league football in the 70s to the heights of the Premiership and a famous heroic FA cup win against mighty Liverpool in 1988.

The exploits of the 'Crazy Gang' are stuff of legend and it was truly a miracle that a tiny club run on a shoestring budget continued again and again to baffle football experts by not only rubbing shoulders with the likes of Arsenal and Manchester United but by beating them too. Much of their success was based upon hard work, good team spirit and their commitment to the tactics of direct football. 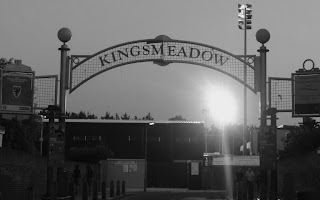 It was this direct approach that won Wimbledon very few fans in the world of football yet they were also secretly admired for their determination and fresh outlook on the game itself. While there were rumblings in old dusty board rooms across England and soccer purists like Brian Clough nodded their heads in disgust many clubs across the country successfully adopted Wimbledon's style of play. A testament to this side is the number of players that remain household names be it in the media ( John Fashanu, Robbie Earl ), movies ( Vinnie Jones ) and football in general ( Dennis Wise, Lawrie Sanchez, Andy Thorne ).

Their legacy can be seen today in the likes of Stoke City and Bolton Wanderers who continue as modern disciples of route one football to compete with much bigger clubs on lesser resources and numerical support.

The teams emerge onto the pitch in preparation for the on coming clash for league football status. 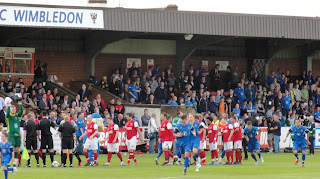 By the mid 90s with the sale of the club and a move from Plough Lane to ground share at Selhurst Park with Crystal Palace it was sadly Norwegian money men that took over the reins at Wimbledon. Their focus was not to build on the foundations of the success of the South London club but to maximise profits by moving the club 60 miles away to Buckinghamshire.
Football fans everywhere were outraged and appalled when in 2003 the club was relocated to Milton Keynes. Thankfully it was also the catalyst needed to start the formation of the new AFC Wimbledon by supporters of the club and a year earlier in 2002 trials were held on Wimbledon common for any unattached footballers to form a new club.

The rapid rise of AFC ( Wikipedia ) 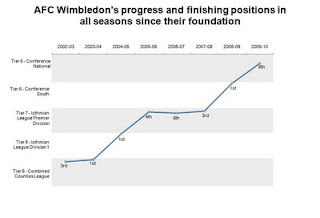 Like the Old Wimbledon before them their rise has been phenomenal and the new Wombles are again virtually knocking on the door of league football. With no disrespect to Fleetwood Town most neutrals feel it justified that Wimbledon ( AFC ) get back into the league and progress through the divisions where they can once again commence battle with the likes of Chelsea and Spurs ( and of course the MK Dons too ! ). 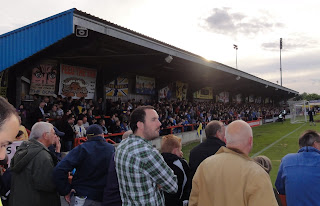 View from the corner of the John Smith Stand. To the left is where the bulk of the hardcore 'Don's' supporters congregate in the old Athletics End ( Tempest ) while opposite is the Paul Strank Main Stand.

Wimbledon share what is considered the home of Kingstonian F.C, Kingsmeadow yet by rights as Wimbledon now own the lease it may be seen as the other way round. Now on the verge of league football this ground that holds just under 5000 will probably be considered too small for any long term stay and other options will have to be explored. This again will undoubtedly raise problems as the somewhat football unfriendly area of Wimbledon has in the past resisted or have not been cooperative in finding the (old) club any suitable location. I have been to Kingsmeadow many times before mainly to watch the Chelsea reserves who played here for a short stint in the 90s.

The Paul Strank main stand hold just over a 1000 seats while opposite is the partially covered John Smith stand which accommodates standing spectators only. Away supporters are situated in the small but partially covered Kingston Rd End behind the goal.

For this sold out game I had tickets in the John Smiths Stand and have to say due to the large numbers it was impossible to see much of the action. Having a 2.0 lead advantage coming into this home leg there was already somewhat of a party atmosphere and nobody seemed to mind the limited view onto the pitch. Before kick off former Wimbledon legends John Hartson, Lawrie Sanchez and Carl Leaburn were paraded around the pitch in an attempt to link the glories of the past with the present day mission impossible. I also had the pleasure of spotting England and Spurs forward Peter Crouch who casually (and politely) pushed in the long queue for collecting pre ordered match tickets.

The Don's dominated the game straight from the from kick off launching a predictable long high ball into the Fleetwood goal area and scoring in the first few seconds. From there it was plain sailing for the home team who were far superior in every department and continued to terrorise and bully the slow and slightly over weight Fleetwood defence. To their credit the gallant northerners never threw in the towel and always attempted to get the ball down and play to feet as opposed to the relentless aerial  attacks of Wimbledon.

Transportation to Kingsmeadow is provided from Norbiton main-line train station and the Kingston bound 131 bus ( from Wimbledon town center) which stops right out side the ground.

Being a residential area there is not much in the way of entertainments but just before you get to the ground on the main road is the infamous Robert Peel strippers pub. You can't miss this sleazy establishment with the trademark white painted windows. If it's the more traditional pubs you want then a better recommendation may be to head for picturesque Kingston on the river or Wimbledon ( trains take 10 minutes from here to Norbiton ) before and after the game. Again no pie report as it was far too congested in the ground but there were also a number of the usual cafes and take aways on the main road.


The sun sets on Kingsmeadow