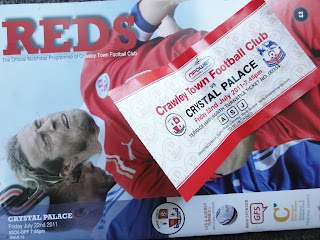 'In truth the most historical and cultural thing you can do in Crawley is go into the countryside and dig up some fossilised cow pat, so maybe it was good thing I missed the town.'

My first game of the season saw me travelling the relatively short distance to newly promoted League 2 Crawley Town.

The Crawley 'Red Devils' with a recent injection of cash have risen from the basement of non league football to league status and have set themselves a target of establishing themselves as a new force in football. Geographically they are positioned in an area starved of professional league football with the locals previously choosing between either fellow county compatriots Brighton and tonight's London opponents Palace ( plus as always a few Chelsea and Arsenal glory hunters thrown in the mix ).

As I was lucky enough to have gained a lift from a friend this was a 'get in and get out' match so there will be no Crawley area report but only a quick reflection of my brief stay in this part of Sussex (and I very nearly wrote Surrey ).

According to some knowledgeable friends in truth the most historical and cultural thing you can do in Crawley is go into the countryside and dig up some fossilised cow pat, so maybe it was good thing I missed the town.

The three sided rural ground itself is a fairly modern sports arena having been constructed in 1997 and holds a maximum capacity of just under 5000. The main stand is unusual in the fact that it has three strange shaped flood lights on top of the roof that gives Broadfield Stadium a unique appearance.

Opposite the stand lies a very small terrace with a rather nice backdrop of trees and open sky that on such a summer night was a pleasing setting. The away section in the North Terrace for tonight's game was very congested and at the half time interval home fans behind the goal were thankfully moved to make extra room for the London supporters.

Now a football league club it is probable that Crawley will need to expand on the current facilities and room for travelling away fans. There have been various bad reports about occasional trouble from Crawley supporters but I have to say that as expected the staff and home fans were very friendly. There were a few idiots of the younger spotty variety laughably making the usual rude gestures but lets be honest what club doesn't have these little runts in their own crowds.

Admission prices were a whopping £17 to sit in the stand and £14 to stand in the terrace which for a friendly is pretty scandalous. If I would of known this before setting off it may of well deterred me from going but having made the journey there was little point in turning back. Some AFC supporters I know have since informed me that Crawley since their cash injection have a a particular bad reputation for an over pricing policy. I suppose the feeble excuse would be if you want success you have to pay for it.

Having said that what made up for the excessive admittance price was the great quality food on offer at the ground. Double bacon burgers for £4 and great looking chips kept many a fan very happy while I happened typically to choose a brand name tikka pie that was cold and tasteless.......just my luck. 1 out of 10 for match price Crawley but a very good 9 out of 10 for food. If you want a drink before the game then it may be wise not to enter the ground otherwise you are not allowed out again. Apparently there is a pub near by and a club bar (which we could not find).

The following information is from the football ground guide  http://www.footballgroundguide.com/. There is a bar at the stadium at the back of the South Terrace called the 'Redz Bar', but this is usually for home fans only. Entrance to this bar is gained from outside the stadium. Peter Bellamy informs me, 'The closest pub to the stadium is the Half Moon on Brighton Road (A2219). This is about a five minute walk away going towards the town centre. Another pub close by is The Downsman, which is on Wakehurst Drive, just off Southgate Avenue'. 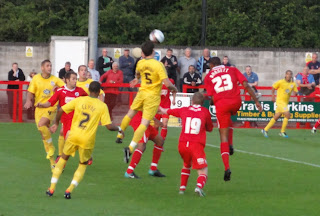 The game was a typical friendly affair with Palace manager Dougie Freedman especially using the occasion to test new signings and trialists which never gave the game any flow with constant interruptions every 15 minutes or so. Crawley to their credit were the more consistent and in all honesty out played the championship side but unfortunately the game from the beginning was destined for a very dull 0,0 draw. 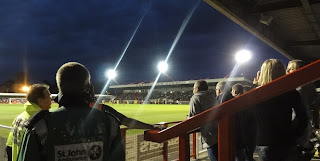 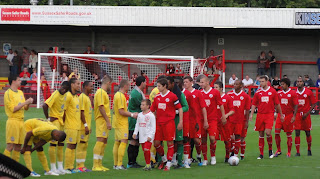