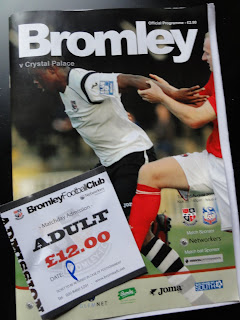 'It was something many deluded Palace fans got caught up in at the time with millions being spent on players and Goldberg reinstating ex Palace legend Terry Venables as Manager to oversee their transformation from Championship league jokes to a top premiership team.'

Second ground of the (pre) season saw me going to non league Bromley in another friendly against near neighbours Palace. As expected due to the close proximity of Croydon's finest there was a big turn out for the visitors although a typical mixture of first team, reserves and trialists were on show for the championship side. With only a matter of days to the start of the season it seems Dougie Freedman the Palace manager has still to find a settled side. This especially after a string of poor results against lower league and non league opposition leading up to the new campaign. Tonight they faced the ' Lillie Whites' Bromley managed by ex Crystal Palace chairman Mark Goldberg who very nearly caused the extinction of the Eagles in the late 90's. In his defence many realize that he was a victim of the economic situation at the time and his over generous commitment and love of the the club caused himself to lose a personal fortune and eventually to become bankrupt. It was something many deluded Palace fans got caught up in at the time with millions being spent on players and Goldberg reinstating ex Palace legend Terry Venables as Manager to oversee their transformation from Championship league jokes to a top premiership team. Without going over all the past it never quite happened and a down turn in events finally led to Palace going into administration and probably into the darkest days of the clubs history.

The trip to the ground was up to a point like a dream. From London Victoria you can catch a fast train to Margate dropping you off first at Bromley South within 20 minutes. Then comes the hard part of a very long walk to the ground which again takes the same time it took to get here from central London. There is another option of taking a 119 bus from East Croydon which takes again 40 minutes but drops you outside the ground. I did have a little time in Bromley before the match but I was greeted by the usual shopping malls so the least said the better. If you travel from Bromley South station then a cab may be the best option if you do not want a long walk.
Update: A Leeds supporter Chris has kindly informed me that the 119 bus also leaves outside Bromley South Station roughly every 10 minutes or so if you don't need any exercise. 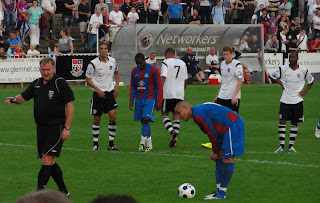 Hayes lane the home of Bromley F.C like the previous ground I visited Crawley has picturesque countrified setting of trees, fields and a big open sky. The main stand dominates the pitch with two very small covered terraces behind each goal and a near non existent open one at the side giving the impression of a three sided ground. There was for this game an end of summer party atmosphere with the hosts providing barbecue food, music and plenty of beer. With the sounds of 'wipe out' blaring from the P.A system all that was needed was some bikini clad girls on surf boards and a sandy beach. I have to say that Hayes Lane was a friendly place to be although it did seem as though apart from the Mark Goldberg connection that many Bromley supporters were also Palace fans making dividing lines very blurry to produce a competitive match with any real passion or conviction. I even spotted ' Sido' a local legendary Palace programme seller helping out the Bromley groundsman on the pitch at half time.
I read on wiki that there have been many improvements to the ground over the past few years with the club obtaining the lease meaning possible further investment and expansion in the near future. 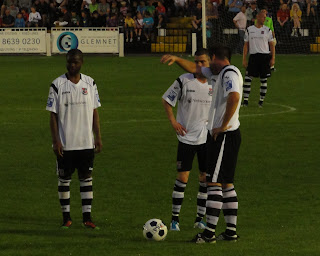 Admission price was a reasonable £12 and there were apart from the aforementioned barbecue a variety of food vendors, an ice cream van and two very popular club bars. With no pies for sale I opted for a cheese burger which was okay but I should of chose the BBQ platter for £4.
8 out 10 Bromley for the grub but 4 out of 10 for a sub standard programme on sale for £2.50.

The game itself was the predicted huff and puff of a friendly with the visitors enjoying most of the first half procession but against the run of play finding themselves a goal down. Palace with the obvious superiority in players managed with their band of first team wannabes to come away with a 2.1 victory but still leaving questions as to what is the preferred match eleven or even if they will again struggle to stay up in the coming season. Bromley on the other hand looked a solid, hard battling side that could be up there in contention for promotion from the Blue Square South to the Conference if this performance is anything to go by. 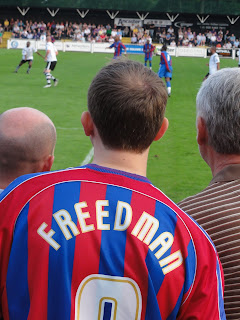