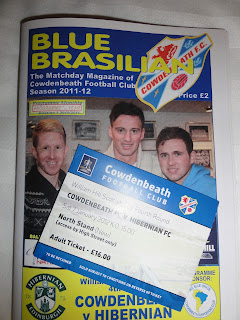 It was one of those surreal moments when you realise that this is what football is all about. I have seen many a strange sight at a game but never a man dressed up as a cow riding a kid's scooter and flying a Brazilian flag. Priceless !

After a fair amount of globe trotting in recent years a New Year's East Coast network sale ashamedly gave me my first  opportunity to cross the border into Scotland at the ripe old age of 44. Having carefully studied the football fixtures I firstly focused on the two Glasgow giants but with the Scottish cup in early progress my attention was eventually drawn to a club more famous for having a comical bovine name and a strange duel purpose stadium, Cowdenbeath.

The division two side were drawn against SPL side and near neighbours Hibernian. On closer inspection this was a contest that had a possible cup upset written all over it. Smelling blood this hadn't gone unnoticed by the Scottish media who descended upon Central Park like vultures around a mortally wounded animal.

Only a week before struggling Hibs had locked horns at home to arch rivals Hearts who are themselves a club in crisis and in peril of going into administration. Even with Key players refusing to play due to unpaid wages, Hearts were clearly the better side and much to the embarrassment and humiliation of the 'Hibees' deservedly came away with all three points.

In contrast ' the blue Brazil ' Cowdenbeath were in pole position in Division 2 and looking set for a quick return to the 1st Division. 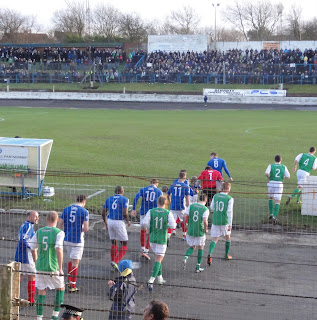 If Glasgow is Edinburgh's intellectually challenged bigger brother then Cowdenbeath is it's unwanted offspring. Discarded like some runt and virtually forgotten in the mists of time even mother nature is attempting to sink this ex mining town back into the deep dark pits from whence it came. Subsidence has caused over the years for the area to buckle and twist yet miraculously it continues to survive and stubbornly refuses to fade away.

In it's hey day it was known as the ' Chicago of Fife ' and was a hotbed of radical left wing politics but with Margaret Thatcher's attack on such communities and subsequent victory in decimating the mining industry in the early 80s Cowdenbeath literally had it's heart ripped out. With all the mines closed and no more black diamonds to plunder the population dwindled from 25,000 in the 1960s to just over 11,000 today.

The football club reflects this gritty old town in the sense that it continues to punch well above it's weight in Division 2 and it is a strong testament of Cowden that they are again on the verge of gaining promotion and returning back to the First Division. 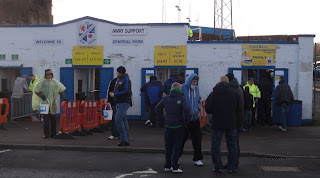 We arrived in Cowdenbeath an hour before kick off which gave us ample time to explore the small busy high street and get something to eat before the game. Being 18 miles from the capital  it is served well from Edinburgh Waverley Station although for a small provincial town expect a maximum of two very cramped railway carriages only.

I had optimistically punched in Cowdenbeath  in the search engine of both Trip Advisor and Wiki Travel before travelling only for the computer to basically respond ' Where the Hell is that ?'
It seems the most famous historical attribute given to Cowdenbeath is that it is the place where Queen Victoria's horses stopped on their way to Edinburgh to have their shoes changed. I'm sure the locals are more than delighted with this token of Royal recognition.

If I was expecting men in kilts, ginger hair and haggis then track suits, weathered faces and mutton pies would of been a little more accurate. According to cyber space it seems in modern times the mark of any decent civilisation is proven by the presence of a Starbucks or Marks and Spencer ,establishments very much noticed in their absence. Even good old Ronald the Clown the patron saint of unemployment, obesity and single mothers has thought twice about setting up a church here and in his divine wisdom safely opted to pray ( prey ) in neighbouring Dunfermline instead.

Luckily a friend had lent me an informative book (  'Stramsh' by Daniel Gray ) which gave me a far more detailed review about both Cowdenbeath the place and the football club. We had passed a rough looking pub strangely called The New Goth which was not a watering hole for local Marilyn Manson fans and devil worshippers as you would expect. 'Stramsh' explains that apparently in the old days this was an experiment in social drinking with a conscience. The book continues that based on some theory in Gothenberg, Sweden that it was accepted that people in poorer industrial working class areas would drink alcohol. However rather than exploit this failing or discourage such practices it would be more beneficial for the community as a whole for a percentage of the profits to be used to improve the local services and amenities. 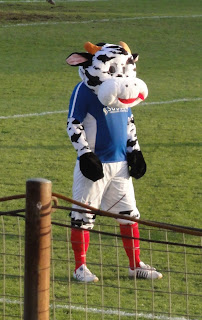 After passing a number of pubs, a burnt out derelict hotel , bingo hall, charity shops and an inappropriately closed cafe the tour was quickly over. Ravenous after our marathon journey from London we eagerly went in search for a local Scottish pie which I had read was something to be remembered. How right this info was as my mutton pie (disguised as is the fashion here as a pork pie) had to be the worst in memory. Whatever vile contents the pie contained was indescribable but after the first bite it oozed out vast amounts of boiling fat  which dripped down my arm and eventually congealed onto my jacket. It was soon being thrown into the bin and again another attempt was made at the ground which was only marginally better.

Cowdenbeath disappointingly gets 1 out of 10 for pies. 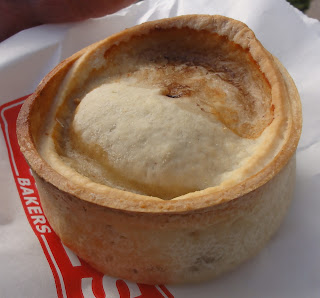 The only other negative today was the weather. Even though the temperature was moderate for this time of year the blustery wind had a chill factor of minus ten. Having three layers on my head I could still feel it and can only describe it as like dunking your head into a bucket of freezing water. Before there are accusations of labelling me as some weak Southern softy the locals too were suffering and clambered for shelter when the gusts grew gradually stronger.

Match day programme was a cheaply produced pamphlet full of interesting facts, figures and stats. Even though it looked like it had been made from recycled toilet paper at £2 ( normal match day price £1 ) it was a bargain and gets a deserved 7 out of 10. 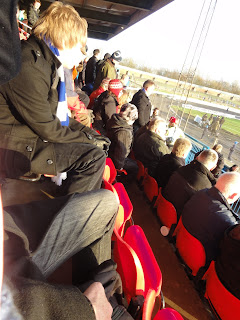 Central Park home of Cowdenbeath is a five minute walk from the station just off the High Street.  Befitting the area the ground is a basic traditional stadium holding up to 5000 spectators. The first thing that is noticeable about Central Park is that it has a duel role as a stock car track too to improve the revenue. The racing track surrounds the pitch and various parts of the ground are littered with unsightly piles of tyres and safety fences.

There are two odd looking covered stands on the North side or more accurately it should be one as half of the stand was burnt down in the early nineties to be replaced by an ill fitting newer structure that does not blend in very well. We had seats for this stand and found it to be fairly comfortable with ample leg room and a fairly decent view of the pitch ( although the racing track meant you were further away from the action ). The cold Scottish weather had also warped the thin plastic seating which meant sometimes it felt like you were sliding off  most of the time.

The lively and vocal Hibs supporters converged on mass mainly into the uncovered South and East Stand terracing. Around most of the ground there is a fairly small brick wall where stewards were constantly in battle with non paying spectators whose bobbling heads were popping up like Jack in the boxes throughout the entire ninety minutes.

Price of entry was a slight increase from £14 to £16 ( seating ) due to the more prestigious opposition.
Central Park gets 7 out of 10. Always nice to see these types of older grounds still in operation and hope that from maybe a few areas of minor improvement that they manage to retain this lay out. Okay admittedly a little dilapidated and disjointed it still oozes so much character and history.

Update : I have since been informed that the chairman of Cowdenbeath has stated in a recent official match day programme that the club are looking to move as the present site is no longer viable due to the high running costs.
Refreshments were provided by outside vendors and was of average quality. 5 out of 10. 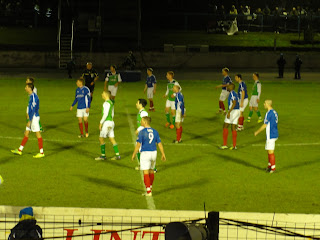 As stated before Cowden once nick named the miners and for obvious reasons are now christened the blue Brazil as a result of some mickey taking from the locals. Such unintended accolades have paid off as Cowden are a gifted young side playing attractive football and an away Brazil strip to match.

Straight from the kick off the home side applied some early pressure and within seconds were a goal up. Such optimism by the locals and the TV cameras for a cup shock was short lived as gradually Hibernian were allowed to show their superior class and dominate the proceedings eventually scoring three goals.
In true blue Brazil style Cowden's number 8 Jon Robertson skilfully flicked it over a static Hibs defender and sublimely volleyed the ball into the net to make it 3, 2.
However it was a case of hero turn villain as Robertson squandered an easier chance to force a replay when with only the goalkeeper to beat from 10 yards out he blasted his shot wide of the post.

At this Cowden mascot Blue Bell the cow resorted to extreme tactics to inspire the team and the crowd. It was one of those surreal moments when you realise that this is what football is all about. I have seen many a strange sight at a game but never a man dressed up as a cow riding a kid's scooter and flying a Brazilian flag. Priceless !

With shouts of ' Keep the bull doon ' , ' Blue Brazil' and Bluebell charging up and down the pitch the part timers showed a spirited display in the last few moments of the match but were unable to capitalise on their dominance. 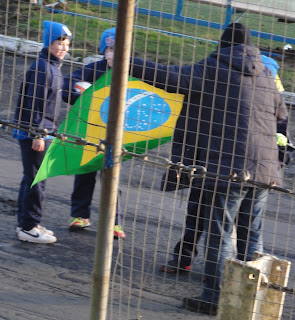 It would be easy to mock such a town as Cowdenbeath. Having read a little more about it and seeing similar towns on my frequent visits to South Wales I can only conclude that it holds as much importance to the history of Scotland as the bigger and more famous cities. It can be argued that even in better times life here was hard for ordinary working people and I can only hope that some how the town will adapt and see better prosperous times again.

In truth if you are contemplating going to Central Park it may be more advisable to stay in the capital Edinburgh for comfort and convenience where there is a more varied choice in accommodation and a little more to see and do.
Good standard rooms can be obtained for just over £20 and travelling wise there is better access to other parts of the country and throughout the U.K. I do recommend that if you travel here to spend some time looking around and spending some money in the pie shops and pubs. Weather and time permitting there is a golf course near by and the surrounding countryside is supposedly picturesque. 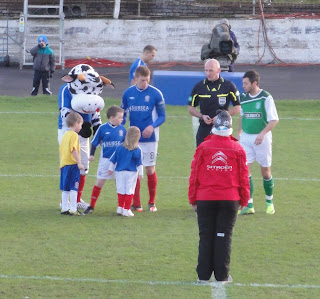