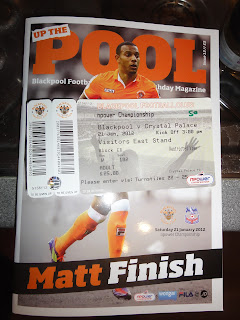 'As time went on Ollie was clearly becoming more agitated and wearing appropriate orange gloves flapped his arms madly around as though he was auditioning for a Tango advert.'

Before the advent of cheap package holidays, computer games and satellite TV for decades Blackpool was the great leisure metropolis of Britain.  Drawn to the famous illuminations hoards of working class families from across Scotland, Wales and everywhere north of Watford would descend upon this northern wonderland like dazzled moths. In a time when having your five a day was four pints of brown ale and a packet of crisps Blackpool flourished yet it has become increasingly hard for it to adapt to the modern age and today it struggles to keep in touch with the demands and sophistication of 21st century tourism.

The gold of this once 'El Dorado' of the north has gradually faded and it seems with the revival of it's famous football club the future is bright and now almost certainly orange ( or tangerine ). 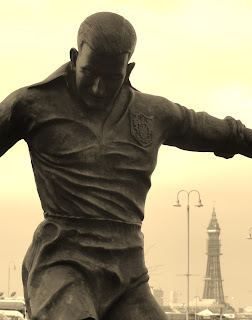 For every neutral football supporter Blackpool's brief stint in the Premiership last season was like a breath of fresh air and it won the Lancashire club an army of TV admirers across the country. It also proved that promotion could be achieved by a club with a relatively small fan base and virtually no money.

Defying the the odds and centred around the talented Scot Charlie Adam, manager Ian ' Ollie ' Holloway had gathered an unlikely bunch of journey men, kids and has-been's  moulding them into what was briefly the most exciting team in the Premiership. However it was this lack of strength in depth that was probably the main cause for The Seasider's eventual slip back to the Championship on the last day of the season losing gallantly to the mighty Manchester United. Many are now convinced that while Blackpool's star shone brightly without their former talisman Adam they are destined to fade and return to the lower tiers of the football league. Holloway is on a mission not only to prove them wrong but ultimately to regain Premiership status for the Seasider's.

It became clear that with nine changes from their last match Crystal Palace had made the journey with one eye firmly on the upcoming League cup semi final with Cardiff on Tuesday. Dougie Freedman the Palace manager fielded what is in effect his reserve team possibly sending a clear message to the travelling supporters about his teams chances of gaining promotion this season.

This game also marks my completion of all the current Championship grounds, so a well deserved pat on the back for me. 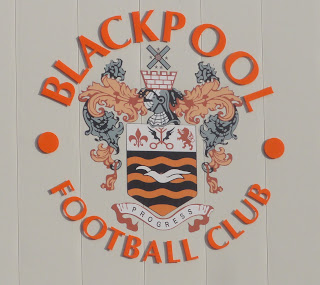 Obtaining cheap advanced fares of £30 return on the train had meant an early 6.00 am departure from Euston and an arrival in Blackpool North of 9.00 am leaving a marathon six hours of free time before kick off. In hind sight it may sometimes be wiser to spend the extra money as now I would be probably spending more overall in food and drink. What made matters worse was the weather was terrible and gale force winds had managed to close down many of Blackpool's famous attractions. The observation deck on the revamped Blackpool Tower was temporarily off limits for health and safety reasons and the sea front was deserted as people sought sanctuary indoors or sheltered busily in various shopping malls. 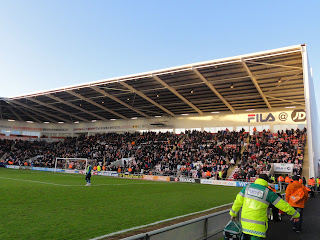 The aforementioned period of transition for Blackpool had also thrust upon it the problem of having an identity crisis. The sound of traditional wurlitzer organs to the tune of I do like to be beside the seaside competed unsuccessfully with bad imitation Disney rides and slot machine arcades.The uncomfortable shift from nostalgic summer holiday destination to the more lucrative and frequent hen weekends and pull a Granny nights was evident. Even in the early afternoon while I was dressed up for a snow blizzard the streets were full of young girls in heavy make up and mini skirts braving the elements.

I was having an identity crisis myself when spotting  a strangely located sci-fi shop amongst the tacky souvenir stores and fish and chip shops. Detaching myself from macho groups of men with beer bellies and football shirts I sneaked inside and blended in disturbingly very well with the geeks and train spotter types. For a good half an hour the dork inside of me took total control as I mingled with the Daleks and dribbled over vintage Batman toys. Sadly in these days of sobriety the customary Saturday night call to inform the girlfriend I would be out with the lads has been replaced by ' Sorry Dear I might be a bit late tonight as I'm going around Nigel's house to look at his Subbuteo collection.'

Rather ashamed and coming around to reality in the cold biting winds I made my way to the ground. 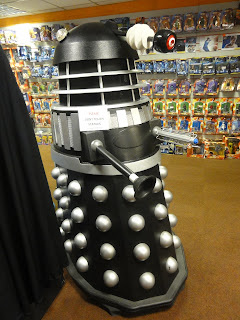 Bloomfield Road lies a good few miles from Blackpool North train station in a slightly more residential part of town. The lesser used Blackpool South station is closer but it would be a waste of time coming here without seeing the sights and walking along the promenade. Another option would be to take a tram ( although on my visit here they were not running ) or the number 11 bus from outside Blackpool North station.

With the rise of fortune for the Seasider's the ground is in a gradual phased transition and away fans are sat in the temporary East Stand. Although a good sized sturdy and covered construction there are a number of pillars that annoyingly obstruct the view of the pitch. There is decent amount of leg room and for an added pound I had the extra comfort of seating on a fitted orange cushion. There is still a little added work being carried out between this Stand and the South Stand and on completion will give Bloomfield Road a modern bowl type look eventually connecting all four ends. Currently Bloomfield Road has a capacity of just over 16,000 which will of course rise when all building projects are completed.

Being temporary the food and toilet facilities were not great and the blustery winds and rain were able to penetrate even my upper section at the back of the stand. However the ground has a good atmosphere with the Blackpool supporters being on the whole a friendly bunch. The heavy handed stewards in contrast were not and took great pleasure in ejecting people for smoking in the open air outside area. I know clubs are directed by health and safety regulations but a little common sense can be applied in these situations.
Price of ticket was the average but still excessive £27.
Taking into account the construction going on Bloomfield Road gets 7 out of 10.

An unknown brand Chicken Balti pie managed to take the weather off my mind and gets 8 out of 10
Match day programme priced at £3 was the usual glossy type publication adequately full of  topical football related articles. Again another 8 out of 10. 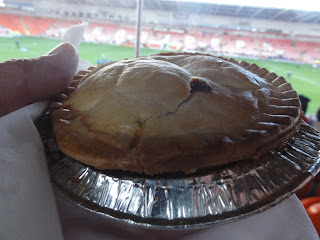 As mentioned before Palace had come to Blackpool with a substandard squad in order to concentrate on Tuesday's semi final. Being within reach of the play offs I found Freedman's playing safe policy a little mystifying. To make nine changes is excessive and in my humble opinion unwarranted as surely promotion must hold priority over everything else.

With super cult pants striker Calvin Andrews making a rare appearance and a host of other unknowns Palace played the contain and break game to some early success. Gaining a goal through a rather harsh penalty decision the Eagles managed to frustrate The Seasider's for most of the first half. Alas the mickey taking humour was lost on poor Calvin Andrew who thought that the crowd singing ' f*** off Mourinho, Calvin is ours ' was some chant of  adulation. But his efforts were whole heartedly appreciated and with his endless running he did gain a lot of respect and support.

As time went on Ollie was clearly becoming more agitated and wearing appropriate orange gloves flapped his arms madly around as though he was auditioning for a Tango advert. With many chances squandered by the Palace attack Blackpool eventually managed to take control through some shrewd tactical substitutions and neat passing football. With just over five minutes left Blackpool equalised and  it looked like Palace would earn a well deserved draw. Yet with the legendary veteran Kevin Phillips on the field he was able in the final minutes to hit the post with a header only for sub Chris Basham to score from the rebound. It was clearly a 'Tangerine dream' finish for Holloway and his team who are now a single point from the play off positions. 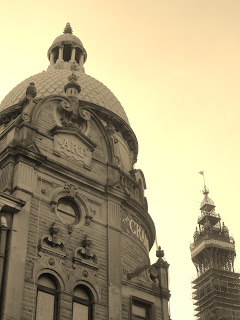 I left the ground with the Blackpool fans ironically singing Dave Clarke Five's Glad all over ( their song too Palace fans ) which after today's events was too much salt in the wound for me.
On my long walk back to the station even in January I passed many a B&B with no vacancy signs proving that this city of lights still has plenty to offer. With the faint sounds of a fairground organ I took one more look at the great Tower who like a great iron giant seemingly looked down a little more happy and contented. 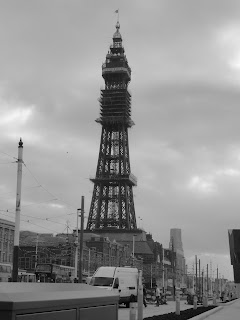 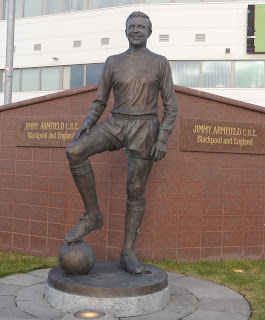