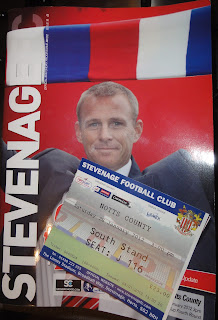 'Rule of thumb is to look like you know exactly where you are going but at the same time to discreetly observe small groups of men wearing football tops and follow them. From past experience not always a good idea but on this occasion it worked.' 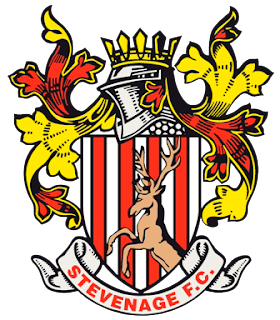 Over the past few years there has been a growing trend in English football of the emergence of smaller clubs representing sometimes characterless rural towns with no real soccer traditions or history gaining league status. Ironically the likes of historically established clubs Grimsby, Luton, Wrexham and Stockport presently continue to scrap it out for promotion back to League 2 in the depths of the Vauxhall Conference. A period of austerity and administration has caused teams like Plymouth to wobble precariously above the trap door yet heavy investment into new boys Crawley Town makes them one of the firm favourites to go up in their first attempt. Currently lying in the play off position in League 1 Stevenage F.C ( previously Borough ) part of this 'new order' achieved back to back promotions during their first year as a football league club in 2010 and it remains to be seen to what level such teams can aspire to.
Today in this F.A cup 4th round clash fittingly relative 'newbies' Stevenage F.C host fellow league 1 side Notts County the oldest professional football club in the world. 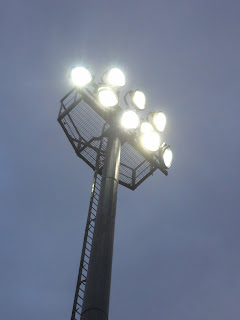 There will be no area report as it was straight to the ground from the station and virtually straight back again. From London the 30 mile journey was a breeze taking approximately 20 minutes from Kings Cross. Locating the Broadhall Way ground home of Stevenage was a little more tricky. From the train Station it was a case of navigating around or through various retail parks, walking along a cycle lane and losing my bearings in motorway underpasses. Rule of thumb is to look like you know exactly where you going but at the same time to discreetly observe small groups of men wearing football tops and follow them. From past experience not always a good idea but on this occasion it worked.
My expert detective work paid off finally and I arrived half an hour before kick off.

Broadhall Way or the Lamex Stadium the current official title is a fairly modern 6500 capacity ground that being on the out skirts of Stevenage comprises a mixture of the urban blending in nicely with the leafy Berkshire countryside.This match had attracted a lot of home support and I chose wisely ( or so I thought ) to sit with the visiting County fans in the South stand behind the goal. It was a fairly good sized and a covered stand with ample leg room although strangely opposite the North Stand was far smaller, terracing and only three quarters covered ( I suppose an upgrade is in the pipe line for the future ). The Main Stand to my left was an impressive ( for this level ) good sized single tiered construction while the covered East Stand terrace was of a similar size.
Obviously there was a very good atmosphere in the East Stand with the ' Boro ' fans making quite a noise and being very active in a non intimidatory way. The same could not be said of the County fans who I sensed by their reactions to be a club in turmoil and not at all happy with their teams performance for this game and the season to date. There was bickering and small arguments between themselves and even their own players were harshly criticised throughout the game. Again I witnessed supporters being ejected but this time round I have to confess some of the County fans were a little overly vocal towards the family section in the West Stand and one idiot even yanked off his seating. I fully agree to create some kind of passion and atmosphere crowd to crowd banter should be tolerated and even encouraged. Today however was not a good example considering the number of very young and elderly fans in attendance and such crass actions towards the opposing fans are sometimes unnecessary and over the top.
All in all I found the ground to be quite atmospheric helped mainly by the friendly and enthusiastic home support. The town is obviously very proud of it's team and different generations of supporters sat happily together wearing shirts and scarves throughout the stadium.
Price of admission was a reasonable £23 and facilities at Broadhall Way were fairly adequate but a little congested at certain times especially during the half time break. Again half time nicotine puffers played cat and mouse games with the patrolling stewards. Surely a place can be designated away from the non smokers and children that complies with the law and saves forty plus year old men acting like naughty school boy's hiding behind the shed.
7 out of 10 for the Lamex Stadium. 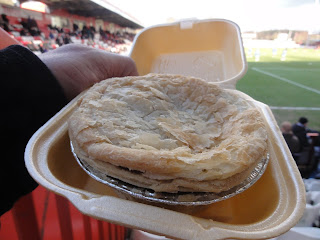 Strangely even though I had passed a Pukka Pie warehouse close to the Stevenage station it was 'Peter's' steak and kidney on sale here at £2.50. Placed in a burger box for warmth yet without the essential plastic fork. A bit messy for one such as me and I spent the rest of the game covered in crumbs and gravy stains.
7 out of 10.
Programme sold at the usual £3. Okay publication that seems to mirror the rest without standing out from the crowd.
7 out of 10 too. 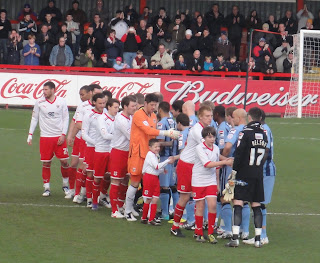 The game was a rather scrappy affair with both sides content to play direct football either playing the ball into space or resorting to aerial bombardments of both penalty areas. An early Boro attack had caused panic in the County defence and Stevenage were able to take an early lead through an own goal in the 12th minute. Stevenage looked the more organised and seemed to boss County both physically and tactically.
Continual attacks into County's goal area only infuriated the 'Magpie' support and it wasn't until the second half that Notts County were able to respond with any real conviction.
With half an hour to play Martin Allen the County manager took the risk of playing three strikers in an all out attempt to get the equaliser. Although it made the game more exciting the visitors never had the quality to score. Veteran ex West Brom and jail bird striker Lee Hughes had either a bad day at the office or the years have finally caught up with him. In fairness his striking partners and midfield support were not much better and the Nottingham side always looked very suspect in defence.
The Magpies applied plenty of pressure towards the end of the game but it was always Stevenage that looked the more organised and dangerous. However neither side were able to score again and the match was settled by the earlier own goal in the first half.
The biggest cheer of the day came after the final whistle as the home support were informed that recently departed ex manager Graham Westley's Preston had lost to relegation threatened Yeovil Town.
Update: Stevenage are rewarded with a home tie against Premiership Tottenham on 18th February.

With the Boro on the verge of Championship football I'll conclude by again raising the question to just how far such teams as Stevenage can advance through the leagues. It's always nice to see small clubs contesting with the traditional bigger teams on a weekly basis yet with a population of around 85,000 and a limited infrastructure can this momentum be truly sustained for the long term. Proof of this may be the reason ex promotion manager Graham Westley's decision to surprisingly jump ship and join League 1 under achievers  Preston North End. Has he gone purely for monetary reasons or realising their limitations has he taken Stevenage as far as he can ?
Another problem could be that while the valued investments in such clubs as Stevenage, Crawley, MK Dons etc are substantial at this level will it be enough to compete with the likes of Leicester and Birmingham in the Championship ?
Whatever the answer I'm sure Stevenage fans will enjoy the ride and I sincerely wish them the very best. For me this was an enjoyable day out and fingers firmly crossed when all my footie grounds are completed I hope to return here one day. 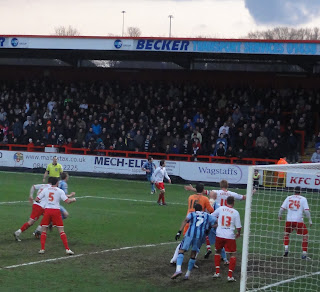