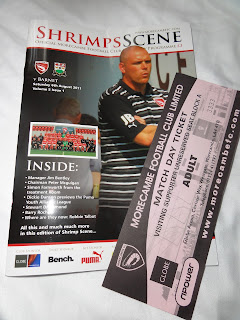 ' The final leg from Lancashire Station involves boarding a decrepit two carriage train looking more at home in the prairies of the Wild West. I expected the conductor to hand out Winchester rifles to fend off marauding Indians and Mexican bandits. '

Apologies Morecambe supporters and regular readers for this report I will change my established formula due to the fact that somehow at the time of the match last August I lost the photos within the dusty vaults of this computer and being last summer my memory is not what it used to be. So unfortunately there will be no game summary or little said of the area ( or just the fading memories I can recollect ).

Fear not for such trivialities are unimportant for at this quiet seaside town after a long and arduous forty year journey I at last found my own gastronomical nirvana, Morecambe the undisputed champion of heavenly crusty pastry, the Holy Grail of the football pie ! 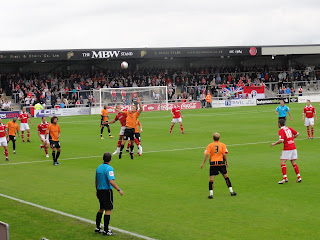 Patience they say is a virtue and to get the the tummies a rumbling such matters will be covered a few paragraphs on. As with any holy quest there are are usually some seemingly impossible tests to perform and Morecambe was no exception. Indeed the journey to the ground and back to my temporary base at Blackpool was like a scene from the Di Vinci Code.

Geographically Morecambe looks a stones throw away from Blackpool yet it incorporates three train journeys, a hell of a lot of waiting around and a few trips to the loo. The final leg from Lancashire Station involves boarding a decrepit two carriage train looking more at home in the prairies of the Wild West. I expected the conductor to hand out Winchester rifles to fend off marauding Indians and Mexican bandits.

The laughable oversized milk float on tracks was so agonisingly slow that had the train really been under attack by Indians and bandito's then they would of been well advised to leave their horses at home and plunder on roller skates. At the platform on the return journey the nightmare continued as I waited for over an hour in the rain due to a train breaking down ( or did it hit a bison ? ).

My only advice in hindsight would be if you are not travelling by car then it's probably best to get a bus, hitch-hike or buy a skate board. I bet there are a few sniggering locals reading this so please leave a comment as your input and help in directions to this sea side town would be greatly appreciated. 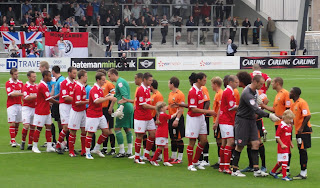 Living in the shadow of it's more flamboyant neighbour Blackpool, Morecambe has recently hit the headlines for the wrong reasons when in 2004 many Chinese illegal immigrants were sadly drowned when harvesting shell fish in the dangerous sands.

With the loss of two piers and the recent closure of it's near hundred year old theme park ' Frontier Land ' Morecambe is a town in decline. But having said that in contrast to the somewhat tacky attractions of Blackpool it makes a suitable alternative for those looking for something a little more cultured and quiet. Even in August the weather was a little cold and it's no mystery why the numbers on the promenade only reached a handful considering the guaranteed hot weather and blue skies of budget holidays.

When you arrive in town again it's quite a task to locate the Globe Arena and having done no research before travelling I relied on simply asking directions from friendly but surprised locals. What did not help was the fact that Morecambe was virtually deserted and most of the folks I happened to bump into were either tourists or away supporters that were lost themselves. I wanted to see the famous Eric Morecambe statue but with time running out it was a quick stroll along the front before veering off the beaten track to the football ground.

After a half hour journey I finally found the impressive Globe Arena. Okay not impressive by Old Trafford standards but being only built in 2010 this 6,476 capacity ground has top notch facilities and is more than adequate for league 2.

A little worrying was the unofficial policy of having little or no segregation between the opposing supporters but I simply put this down to a friendly and sporting football club proud of it's team and traditions. Still this could be a problem the more established in the league they become and maybe a few extra stewards could be placed in certain critical areas.

For £18 I sat very comfortably in the Main Stand with enough leg room to fully stretch out and enjoy the game. Some areas of the stadium looked undeveloped and away fans were prevented from going into the slightly cheaper North Stand terracing.

What is apparent is The Shrimper's desire to construct a ground built in the traditional customary way and not simply a fast track boring globe design ( strange that down to the name of it's building contractor it's been christened such ). When completed the Globe Arena will undoubtedly be one of the finest grounds in the lower leagues and even in this not fully developed stage I give it a well deserved 8 out of 10.
The bit I have been waiting for.... 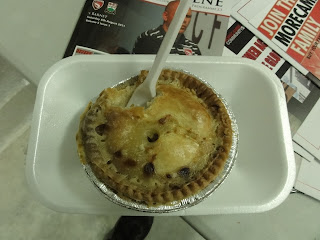 Having briefly skimmed the match programme before the game I was already in the knowledge that The Shrimper's had won the 2011 football League pie of the year award. Hastily like a man possessed I made my way to the snack area knocking aside women and children who dare obstruct my path. I opted for the cheese and leek variety and eagerly awaited the prize of my divine quest.

As I bit into a piece of Heaven on Earth I imagined that behind the scenes Morecambe had cunningly kidnapped Gordon Ramsay and had him working around the clock in the pie department. A pie is a pie you may argue but if you travel up to this Lancashire town to see a game of football then a taste of this culinary delight is a must. My only regret was that due to embarrassment having eaten the pie like a famished animal I did not go back and order another one.
Of course the Morecambe pie gets 10 out of 10 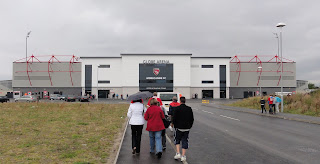 As stated before my memory of this particularly day are somewhat blurred so it's only appropriate and fair that I generalize briefly on the season so far for Morecambe football club. Holding an early top spot a somewhat bright start to the season saw The Shrimpers looking very much like favourites for either the play off's or automatic promotion.

However as of writing they hold a mid table position in League 2 and it looks increasingly like manager Jim Bentley will have to concede promotion and look at the positives of this year and regroup for next season. Probably not having the financial clout of fellow league 2 contenders Crawley or Swindon, Morecambe with the potential for a wonderful ground have the right foundations in place to establish themselves firstly and more importantly in professional league football.

As stated in previous blog reports with storms ahead and the likes of Portsmouth, Port Vale and Darlington fighting for their very existence then it may be wise for Morecambe and clubs in their position to know their limitations. Promotion can be achieved over time with a planned strategy by wisely investing in the youth policy etc rather than instantly spending huge amounts in the transfer market. That being said I hope with such a friendly and spirited support The Shrimper's go on and are successful in future campaigns. Over for now 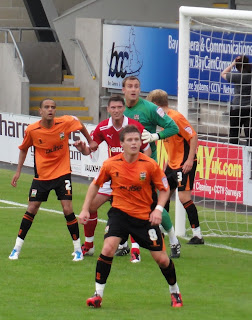 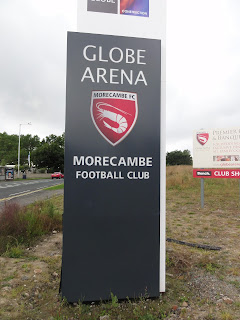