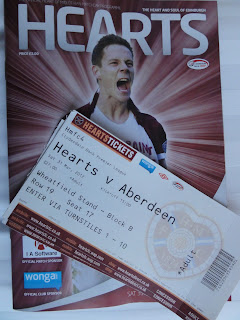 Call me an old romantic but what what a better way to see Edinburgh with my beloved ( and smuggled surprise friend ) than a visit to the aptly named Hearts. Before Cupid substitutes his bow for an AK-47 the weekend visit was planned around a variety of events with a game of footie acting as a little something to soak up the time and keep us non shopaholic males happy.

I had myself fallen in love with Scotland's grandeur capital a few months before on my travels to near by Cowdenbeath and couldn't wait to get back. I will of course give an area report later but as this blog focuses mainly on the beautiful game ( with a little pie input ! ) it's best to get back to work and present some worthy feed back.

The well publicised 2005 take over of Hearts of Midlothian by Russian-Lithuanian banker Vladimir Romanov looked set to potentially break the stranglehold of Scottish football by the Glasgow giants and to mirror the Roman Abramovich Chelsea revolution further South. The foundations were quickly put in place with proposed major ground improvements, an investment in star foreign players and promises by the chairman to the fans of European football glory.

Yet true to name Romanov ran the football club more like a Russian Tsar than a shrewd, competent  businessman. With erratic, sometimes foolhardy decisions and the sacking of a number of established big name managers the club was unable to maintain any stability. In the past few years of austerity reports began to circulate of players and staff not being paid and finally earlier this year it was announced that the club was not surprisingly up for sale.

It seems the tyrannical oligarch has tired of his toy and now wants to cast his attentions to something else. With the purchase of other clubs abroad it is doubtful whether this grand exercise in self glorification was ever genuine or his intentions honest. The question now is has Romanov placed the club onto a stepping stone or taken Hearts a step closer to oblivion ? 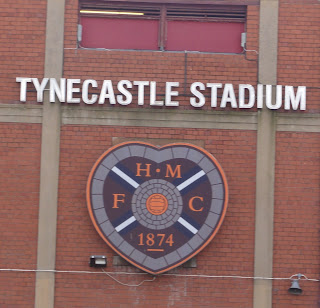 Again a pre booked train ticket meant that the four and half hour journey to Edinburgh cost a very reasonable £30 return. For much of the trip past Newcastle there are wonderful views along the East coast so it may be an advantage to try and sit on the right hand side of the train and take in the spectacular panoramas before you.

On arriving at Edinburgh's Waverley Station it's not hard to be instantly impressed by the capitals beauty and historic heritage. Firstly the great imposing castle perched menacingly above a land scape of magnificent cobbled streets, grave yards, Gothic churches and Georgian buildings.

Thankfully it is also a tourists dream with most of the main sites within walking distance of each other so there is little need to travel around by public transport or taxi. 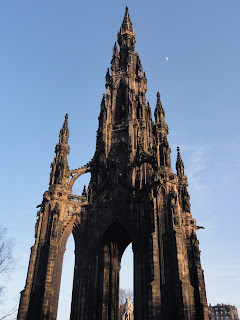 With time running out before kick off we dumped our bags at the hotel and set off by bus to Haymarket Station noticing that for the first 10 minutes of the journey we circled around the city centre and virtually passed the point where we got on the bus. On hindsight it would of been easier to walk but being foreigners in a strange land it's sometimes best to learn by your mistakes. 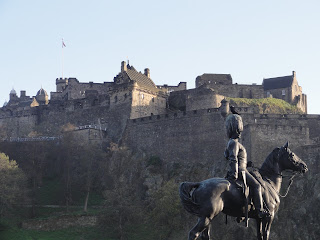 Walking down Gorgi Street away from the main attractions the grandeur buildings evaporated quickly away to be replaced by the usual gritty pubs, Polish deli's, housing estates and fast food shops. Like Cowdenbeath here I made the mistake of eating a Scottish pie. Words simply fail me for how bad these thankfully local delicacies are.

Biting down through the pastry into the boiled mush of bone, gristle and grease it's easy to see why Scotland has some of the biggest bottoms and highest death rates in the world through  coronary heart decease. This is a land where Jamie Oliver is the devil incarnate, Ronald McDonald God and newspaper billboards boastfully announce vegetarian diets are bad for you. I have to say that this is the most vile thing I've tasted since my Mother's spaghetti bolognese or the time as a baby when I decided that the cats food looked more appetising than my mashed banana.

Looking into the a chip shop there were on display various food items such as pizzas ready to be put into the deep fat fryer but surprisingly and disappointedly no Mars bars.
Therefore due to this harrowing experience there will be no pie report as this was enough to deter me from eating at the Tynecastle stadium. Scottish fast food culture does not apply to the entire city and it's fair to say Edinburgh is equipped with some varied and very fine restaurants and eateries. 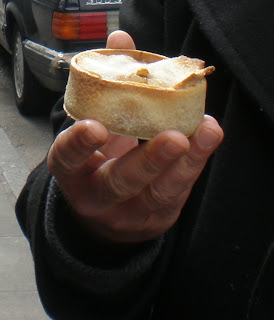 When queueing for tickets we made the decision to treat ourselves to the more luxurious padded seating and improved upper views of the Wheatfield Stand for £27. From our elevated position there was a fine view of the 16,000 capacity stadium and the obvious lay out of three modern stands constructed in the 90s and the much older Main Stand built just after the first world war.

Some would call this a flaw yet I find it somewhat nostalgic and retains some of the character of by gone days in a time when such classic stands are becoming increasingly rare. The main Stand also had generated the best support for the ' Jambo's from a pocket of 50 or so maroon fans. For reasons that I will explain later I wish I had opted to sit with the away support in the Roseburn Stand behind the goal but the entire ground is very impressive with good facilities and the three modern stands having steep slopes for great views of the pitch.

Scottish football admission seems to be more in line with the average supporters pocket and we did opt to pay a premium rate for our padded seating and aerial view. It seems the average price else where was a reasonable £20 and it's great that such clubs do not pander to the prawn sandwich eating corporate client-al as much as they do down south.
Tynecastle gets a respectable 8 out of 10 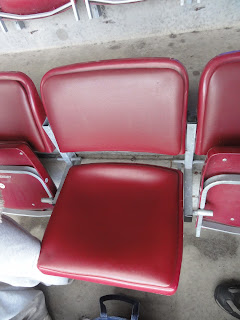 As time edged closer to kick off it became clear that something was not quite right in fact something was very wrong. The 'Jambo's' were slowly making their way to their seats, the Aberdeen supporters were basking contentedly in the sun and the P.A ironically blared out Joy Division's Love will tear us apart. It soon became apparent the atmosphere in this fine historic ground was quite solemn, subdued and dare I say it depressing.

My suspicions were further aroused when Hearts struck the first goal and I looked around me. Amid the somewhat muffled cheers some spectators simply sat there motionless as though they were simply there to observe and supervise. It was like a scene from Invasion of the body snatchers the old 50s sci-fi film where aliens in the guise of gruesome pods would digest sleeping humans and replace them with zombie like carbon copies.

While the Scots have a have a bad fast food diet I too have been raised on a strange diet myself of black and white B-movies and have a probably warped conspiracy theory to the events before me. Having successfully taken over the Emirates stadium aliens have rapidly moved north, invaded Edinburgh and have set up base at Tynecastle, their intentions to slowly take over the world.
The padded seats are a simple ruse to make the unsuspecting spectator fall asleep so it's best to check under your seat for any suspicious pod like shapes or be transformed into a emotionless Jambo !

Okay considering the turbulent times Hearts supporters have been through recently and this being a mid table hum drum clash I may sound harsh. Not being the most vocal person myself I still react to the field of play in front of me, in good times and bad and I do ( shock, horror ) raise my arms when my team scores a goal.

I suppose that the only explanation is that some grounds are simply more reserved than others and today's experience was witnessing some typical Hearts football culture. From our position in the cold shadows I did look enviously over to the few hundred Aberdeen supporters in the sunshine who were doing there utmost to make some noise and wished I was with them. 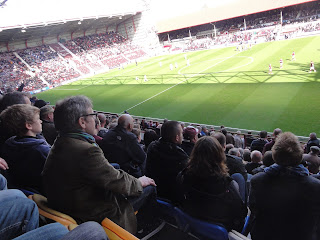 The game seemed to drift in and out for any worthwhile moments with procession being equally shared between the two sides for most of the 90 minutes. The main highlight was the performance of Hearts star man and ex Southampton and Czech international Rudi Skacel.

His quality alone was probably the only reason Hearts were able to tip the balance in favour of themselves. His first goal, a 25 yard bullet that burst the net was pure class that even had the Jambo's making a brief roar and raising an eyebrow.

With the temperature dropping and in need of a cigarette I have to confess of sneaking out before the final whistle and missing Skacel's last goal. Thankfully for the last moments of the game Tynecastle resembled a normal football ground and it was pleasing to hear the Hearts fans sing and to see them smile ( reassured they were not invading extra terrestrials after all ).

It seems Hearts of Midlothian as of yet have not gone into complete melt down and through a phased transition/downgrading they have been able to retain some of their best players but for how long is another question.

It's not pleasant to see one of the worlds oldest clubs in such trouble and I hope a successful solution is found soon. Lets also hope that it serves as a warning to all clubs to be suspicious of any of the so called knights in shining armour, Arab Prince's and Eastern European oligarchs. The sooner such unscrupulous, self indulgent parasites are out of football the better. 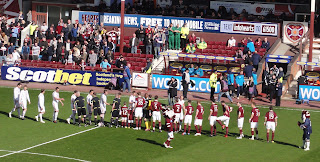 We left the stadium to continue our tour of wonderful Edinburgh. In my opinion there is no better time to see it than from dusk to late evening when the place truly comes alive ( or do I mean dead ? ). With spooky church yards, castles and abandoned underground vaults to explore what better time than when it gets dark. To save time and not have me ranting on and on here is a link to wiki travel that will assist you with Edinburgh's major attractions and where to eat and where to stay.
http://wikitravel.org/en/Edinburgh

Normally at night to create a magnificent spectacle the castle and certain important buildings and monuments are lit up in an array of different colours. Typically this weekend there was an awareness campaign by environmentalists and much of the city was left in complete darkness. If you want something a little bit different then we did try a ghost tour that was in all honesty aimed more at families and American tourists than us very serious adults types. It includes a visit to the aforementioned vaults which is a 19th century attempt at constructing a subterranean shopping mall. Advertised as an underground city it is more in reality a series of dark and damp basements under a street but interesting none the less. 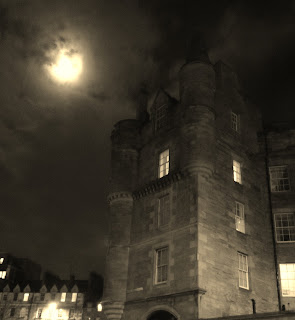 The tour continues onto my next blog report when we accidently stumbled upon a game being played at Easter Road home of Hearts arch rivals Hibernian. Over for now.