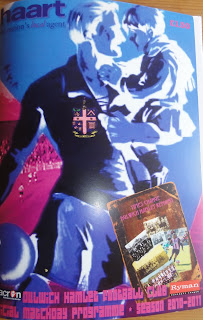 ' If Patrick McGoohan suddenly appeared being chased down the street by a giant white balloon probably very few would raise an eyebrow. '

Pink can be undeniably spectacular, sometimes excessive, sometimes craved and sometimes shunned. The giant fins of a 1959 Cadillac, bright glossy lipstick, bubblegums and the stampeding elephant pounding in your head after a night on the tiles.

Usually more associated with the fairer sex or trendy continental males as a favourite colour, the very last place you would think to find it would be on the shirts of an old established men's English football team. Yet surprisingly Playing eight leagues below the Premiership in Isthmian League Division One South, Dulwich Hamlet F. C have been proudly wearing pink ( pink and navy blue to be more precise ) since their formation in 1883.

Remember that vile psychedelic Arsenal away shirt from the early 90s ?  Designed by arrogant self indulgent fashion gurus of the sports wear industry and inspired by too many Pina Caladas, a greasy kebab and a blank canvass.

This projectile vomit jersey had nothing but the foul stench of corporate commercialism lingering around it like an overrated David Beckham aftershave and highlighted the complete disregard shown to the consumer. It also paved the way for future mass produced abominations in soccer shirt design and condemned the average supporter to annually part with large sums of money to wear a garment that would of been considered loud in Hawaii.

In contrast the Dulwich Hamlet home shirt has a different odour, almost musty smelling, slightly less odious and one steeped in a long and rich history. Yet while modern fans and players generally only have to tolerate the occasional gaudy shirt for one season pity those poor chaps at Champion Hill who have had to endure a noble but ghastly colour combination of pink and navy blue for well over a century.

One can only speculate the origins of such a catastrophe. Had the original kit been blue and white ? Did those nasty oiks at arch rivals Tooting F.C sabotage the washing by the sneaky inclusion of a red pair of briefs ? 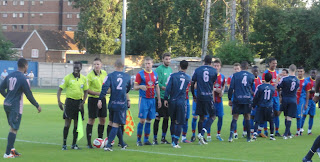 Refreshingly in an age of corporate football, non league clubs like The Hamlet still retain some of the spirit and virtues passed down to them by the pioneers of the beautiful game. What is certain is that if you close your eyes and think of this historical club then images of a more sincere bygone age will come to mind. Pistols at dawn, Queensbury rules, boat clubs and Edwardian public schoolboys.
Secret initiation ceremonies that involve being forcibly bent over while a crowd of sadistic guffawing college toffs and Lord Byron insert a lighted newspaper up your backside.

Like their shirts such grotesque images are not for the faint hearted as is more to the point the average cost of a Premiership ticket.

While certain football Prima donna's will not get out of bed for fifty grand a week these guys on top of ordinary jobs will sweat blood and tears and give their all for less than fifty quid. 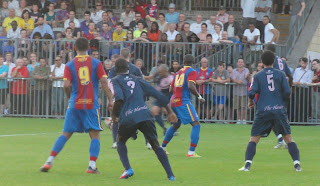 Apart from the football club little remains of old Dulwich save the village, college and park. Once part of greater Surrey the woodland and farms have dwindled to the now mainly prosperous leafy London Borough of Southwark surrounded and intertwined by the colourful urban stalwarts of Brixton and Camberwell.

Although radical changes have occurred over the past few decades Dulwich still retains pockets that struggle in many ways to catch up with the 21st century. Tweed jackets, red telephone boxes and college blazers are a common sight around the village and deleting the obvious American coffee house you could be mistaken for taking a step back to middle England in the 60s.

If Patrick McGoohan suddenly appeared being chased down the street by a giant white balloon probably very few would raise an eyebrow. 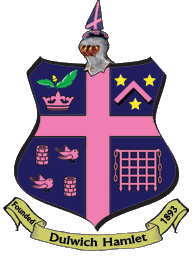 With The Hamlet lurking many leagues below them HMS Palace arrived at Champion Hill like a preying Dreadnought ready to drop a proverbial depth charge on it's lowly opponents hopes of a pre season giant killing. The Championship side dominated the first 20 minutes but to their peril found that the opposition had a few torpedoes of their own.

With a fine heroic display by the Hamlets nimble but over weight keeper enabled Dulwich to counter attack and Palace at times found themselves on the back foot. One such forage deep into the away teams half led to a penalty but fortune was smiling on the Eagles. A superb save by the trialist Palace keeper kept the visitors from going a goal down and the conclusion at half time was a hard earned goalless draw.

After the break Palace with some minor tinkering were able to establish greater control of the proceedings and continuously bombarded the Hamlet penalty area. It took the inclusion of manager and Palace legend Dougie Freedman ten minutes from time to seal a victory and the league side were fortunate enough to come away with a 3, 0 win. The red and blue Goliath by no means slain but definitely returning to Selhurst licking a few wounds. 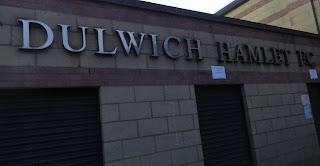 Champion Hill has down sized since it's glory days in the 30s and 40s when crowds of over 20,000 attended  matches at this historic ground. Unfortunately after falling on hard times in the 80s the club had no option but to sell part of their ground to Sainsbury's supermarket and the team currently plays on what used to be the old training pitch.

However this shift sidewards has created an intimate ground that at this level is smart and impressive. The setting is dominated by the main stand which seats 500 spectators and acts as the hub of activities including changing area, bar, tea room etc. Opposite is a small roofed terrace and rest of the pitch is a basic standing area in a leafy attractive setting away from the shops and connected car park.

Cost of entry £9. Champion Hill  8 out of 10.
Match day programme is the standard non league anti glossy publication on sale for £1.50. 8 out of 10
Having been redeveloped in the 80s The Hamlet lacks any wow factor concerning the floodlights and the Champion Hill illuminations receives a disappointing 5 out of 10. 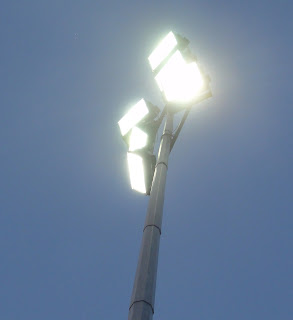 London calling to all you glory hunting Sky TV addicts. Not content to be simply a number ? free yourselves, lay down your sets, cast off your Man U scarves and get off your back sides and support the true life blood of the game.

Prepare for a real life match experience where you can chat with the star centre forward, argue with the ref and play scrabble with the tea lady. On top of that game admission, programme, bacon sandwich and beer for £20 and still have change in your pocket. Such dedication and perseverance by all those at clubs like the Hamlet deserve greater support and who knows you may even like it.
Be seeing you.