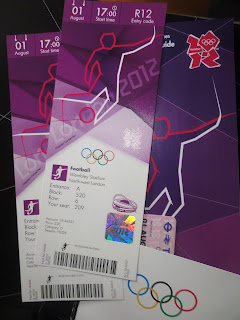 ' Korea you R.O.K' and ' Go, go Gabon, where are you from ? ' are two recommended chants for those that are not content to remain neutral '

Roll up, roll up, roll up for the greatest sporting spectacle on Earth. Ladies and Gentlemen I proudly present to you a once ( or a twice ? ) in the life time experience the 2012 London Olympic games !
Today football the world's most popular sport makes one of it's many appearances in the Olympic spot light as West Africa's Gabon take on the Republic of Korea at Wembley. 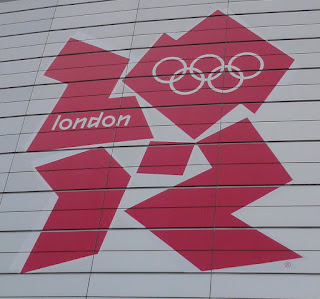 The circus is in town and in an ideal world there should of been 90,000 people staggering happily up Wembley Way towards the iconic stadium like moths to the light. Alas Olympic football was always going to be the hardest sell and far less have purchased tickets for today's event. Previously and elsewhere without many  representatives for Team GB apart from predominantly English players in the squad it has been an uphill struggle to generate much support for the preliminary games especially at Hampden and the Millennium Stadium.

Back in London for the few caught up in the hysteria and hype of the Olympics most are probably unaware of the location of one of today's match contenders Gabon. With only limited Google map access the other half are content in the knowledge that as it's not the more familiar South Korea, the Republic of Korea is more than likely an autonomous state in New Malden ( not to be confused with that mad communist lot over the border in Raynes Park ).

' Korea you R.O.K' and ' Go, go Gabon, where are you from ? ' are two recommended chants for those that are not content to remain neutral. For the rest still obviously drunk on euphoria it's simply enough being here and for some having a brief taste of the Olympic experience ( even though this is Wembley and a good trek away from Stratford ).

Enthusiasm and the general feel good factor  is converted into intense concentration and after the two unfamiliar national anthems the crowd eagerly awaits the kick off.
With the publicised problems over security some suspicious eyes are searching for any Kim Jong-il look a likes in the crowd but thankfully dead Korean Elvis impersonators are hard to come by in this part of North West London and it seems any attempt to breach security are deterred.

Greater efforts are made at this match to show the correct Korean flag and reassuringly we can all sleep soundly in our beds as a third world war is thankfully avoided. 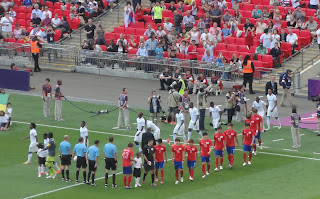 Not surprisingly across all the Olympic sports sponsors have decided not to attend in their droves and this has had a detrimental effect on the least popular events. Football has been a major casualty and last minute solutions are being proposed to counteract high execs making the most of the hospitality area before dashing off with their secretaries to the nearest hotel.

Back in the stadium gradually reality soon dawns on a few that these are in fact two foreign under 23 unknown national teams with a few older and more established players in attendance. Without non participating Team U.K's Sir Beckham ( man, brand and cult ) to promote national interest these two lesser known footballing nations are at a great handicap playing before a mainly English crowd and some empty seats. Large pockets of Korean supporters manage to create a decent atmosphere whilst surfing endless Mexican waves.

Gabon supporters too are here in numbers although suspiciously many seem to have broad cockney accents and look more like black cab drivers as opposed to African football fanatics. Draped in the Gabon national flag they sportingly sing Ga-bon, Ga-bon out of tune to Gary Glitters ' Do you want to be in my gang ' which only adds to the surrealism of the event. 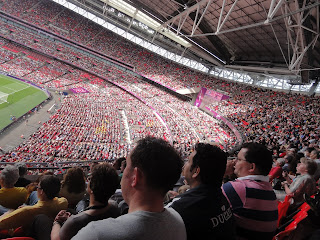 Eventually side glances at mobiles and subtle elbow nudges into ribs betray the fact that for some this is fast becoming a contest between Gabon and Korea versus Coronation Street or an extra hour down the pub. Even the optimistic and over animated TV commentators in the press boxes resemble car salesmen trying their damnedest to off load a second hand Vauxhall Vectra.

The game dragged on without much goal mouth action and twenty minutes before the final whistle there was a mini exodus from the stadium as spectators raced to escape the inevitable human pile up of Wembley Way. Those unfortunate enough to stay on in hope of a goal are rewarded with a marathon budget airline style transportation home and a Dallas rerun on television.

Wembley. 9 out of 10. ( although a complete rip off for pricing....beware ! ) Buy refreshments before coming to the stadium.
Cost of Olympic Ticket £20.
Nearest station. Wembley Park. Around a 10 to 15 minute walk. Bigger games will mean crowd control measures and a longer walk and return back to the station. 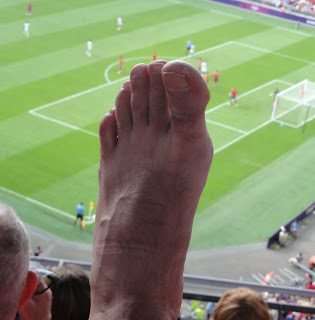