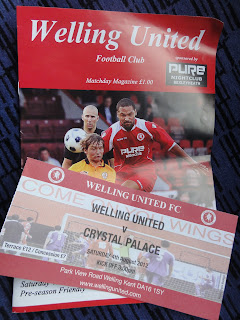 Okay I admit I came completely unprepared for this, no research, no preparation and the biggest mistake foretting the Olympics were on. Therefore this report will be more of a photo shoot with a minimal write up I'm afraid. Normally this simple journey would take roughly an hour from where I live but today with the extra congestion around London Bridge Station the trip to Welling, Kent took double that.
Kent ? Well if you're thinking David Jason and ' Darling buds of May ' then in reality this area is more ' Del Boy ' and a continuation of South East London and is definitely more ' Only fools and horses '.
Remember that you can use an oyster card to Welling train station something I forgot. 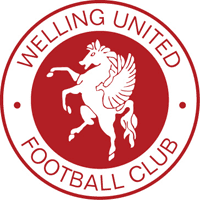 Welling's ground Park View Road belonged formerly to the now defunct Bexley United. Under the tenor of the former club in the 1950s the Main Stand pictured to the right of the above panoramic photo was developed and enlarged due to increasing crowd numbers. Welling founded in 1963 moved here in 1977 and later with Erith and Belvedere F.C  ground sharing in 1999 has helped finance further improvements.
Welling are currently in the Conference South the league below the National Conference. The Main Stand is what I suppose is called a classic stand although admittedly this also means support posts that obstruct the view of the pitch. 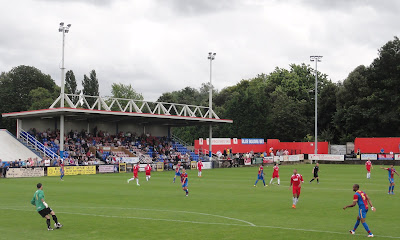 Opposite the Main Stand is a smaller more modern stand that takes up half the pitch while the other half seems to be the rear of a structure meant for next doors Cricket ground. The main terrace area where I was standing took up most of the 5000 capacity although there seems to be some building activity behind the opposite goal. Behind the modern Stand and the smaller terrace lies a nice back drop of trees while the main terrace lies adjacent to the busy High Street. 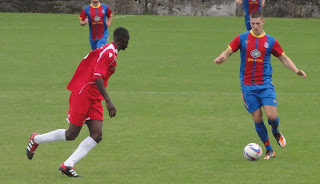 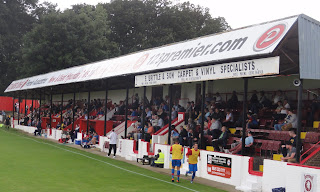 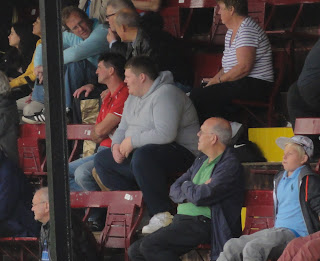 Who ate all the pies ?