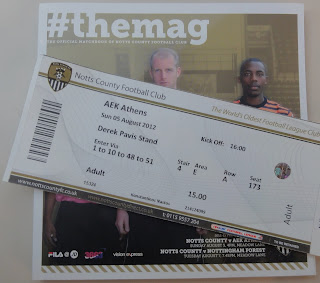 There is a saying that you should beware of Greeks bearing gifts yet after today's experience this should be updated to beware Greek teams playing in far away places. It was just one of those days that everything seemed to go wrong and returned home from Nottingham wet, tired, with an empty wallet and harbouring a loathing of Britain's train companies.

Having arrived at St Pancras Station in the morning I checked our tickets for the first time to find that there was a single ticket missing form the pack of cards that were sent to me through the post. Surely with the receipt and designated seat numbers it would simply be a matter being reissued a ticket. No, not quite that simple, I had to pay again and now go through the long winded process of compensation. That was the first disaster and had I of known what was to follow I think maybe I would of simply turned around and gone back home. 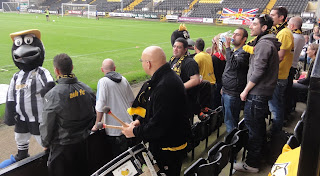 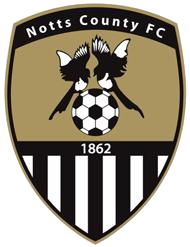 Before I get the onions out and have a little weep I shall give a very brief history lesson on the two clubs playing today at Meadow Lane, Nottingham.
As nearly everyone who has a limited knowledge of football knows Notts County having been founded in 1862 are currently the oldest professional football club in the world and are proudly celebrating their 150th year. In modern times they have succumbed to harder times languishing in the lower leagues, nearly going out of business and since the 80s living in the shadow of their more successful neighbours Nottingham Forest. 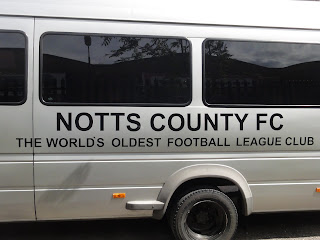 Today the forefathers of football play Greek Super League side and young whipper snappers AEK Athens who themselves due to national austerity measures have fallen on hard times. Being over three million Euros in debt the Greek club have had to virtually sell off their entire team and now hope that their Super League status remains intact following a hearing this week. Apart from a purple patch in the early 90s when AEK were national Champions for a number of years they too have lived in the shadows of the giants of Greek football and fellow Athenians Panathinaikos and Olympiacos.

Today with huge budget constraints affecting the club AEK visit Meadow Lane with what is virtually their youth team.

Having arrived at the the ground at around 2.30pm we had mistakenly thought that the 15.00 was the kick off time only to be told by a smiling steward that this was the price and the game was not due to kick off until 4.00 pm meaning  hanging around for another hour. Luckily there was a local festival on further down the road and this gave us the opportunity to look around the River Trent area including both the cricket ground and of course Counties despised neighbours Forest.

Along the river bank was a hive of activity as the local populace enjoyed the trappings of the funfair and watched the numerous boat races up and down the River Trent. Unfortunetely the weather was on the turn and in the distance dark clouds were looming on the horizon. We hastily made our way to the ground again. 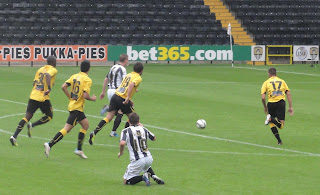 Meadow Lane is a neat classic four stand structure that has a capacity of 20,229. Before moving here in 1910 County were tenants at the Cricket club at Trent Bridge but were often asked to play games at inconvenient times due to cricket being a priority. There have been numerous developments through out the 80s and 90s in ground improvements producing what is a pleasing stadium.

Today because of the ongoing festivities, Tuesdays upcoming friendly with Forest and naturally the numbers of the foreign away support only the Derek Pavis Stand was in operation. A London division of AEK supporters were in attendance and for what they lacked in numbers they made up for it in the amount of noise generated by their small contingent. They continually banged a drum and sang vociferously before the kick off and through out the first half creating a friendly and continental atmosphere. All it seemed was missing was the  customary flares so evident abroad but a little too dangerous for us health and safety concious Brits ( probably a wise thing having witnessed such mad shenanigans in Serbia ).

It seemed some of the older County supporters were annoyed by such an intrusion although many of the younger fans applauded the colourful and dedicated Greeks. The County drum too belted out although it was lost in the noise of their oppositions louder and bigger bass drum.

8 out 10 for Meadow Lane. Classic English ground well worth the visit ( normally ).
Nearest train station : Nottingham. ( 15 minute walk )
Cost of admission £15
Cost of programme £3 ( although annoyingly it was a double game publication for Tuesday's encounter with Forest too )
AEK perform a rain dance ! 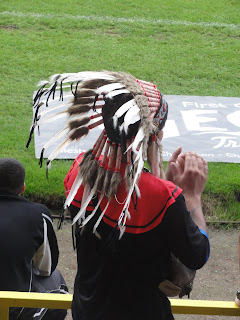 The game kicked off to gathering rain clouds and deteriorating light conditions. The young Greek side at first held their own against somewhat physical County tactics, surprising because this was a friendly and AEK distinguished guests. However they were unable to hold on and the Magpies were able to capitalise on their superior muscle power and overall domination by going a goal up. Coming up to the end of the first half the flood lights were switched on and shortly after there was a huge down pour. Spectators in the first few rows ran for cover apart for the London Greeks who continued to sing and dance in the rain.
I hate that noisy lot 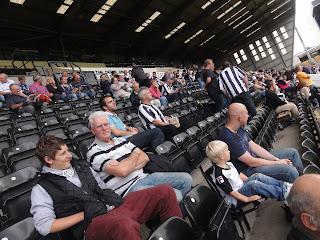 While fans gathered in the refreshment area to buy beers and pies the announcement was made there would be a 15 minute delay due to the adverse weather conditions. However it became evident that with County eager to protect their newly laid pitch that any continuation of the match was unlikely and the game was called off a few minutes later ( health and safety for the players being the official reason ). We now await if the club are willing to compensate supporters for the abandonment of the game. 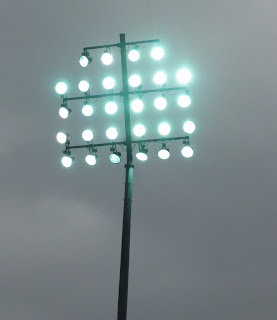 So again there was time to kill and decided a little exploration of Nottingham was a worth while endeavour before our long journey back to London. Being Sunday a lot of the shops had closed and we passed a stature of Forest and Nottingham legend Brian Clough desperate for somewhere to pass the time. Arriving back at the Station we then realised to our horror that we had missed our train by 2 minutes and after pleading with the station staff had to repurchase some more tickets ( another £54 ) plus wait another hour for a train....agrhhhhh !

Maybe it was a case of the current Greek austerity measures being passed onto us by the train company literally turning us upside down and giving us a good shake down. Looks like it will be a diet of pitta bread and hummus for the rest of the month ! 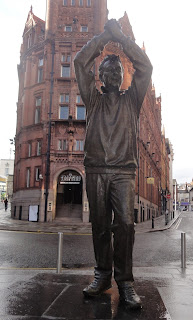