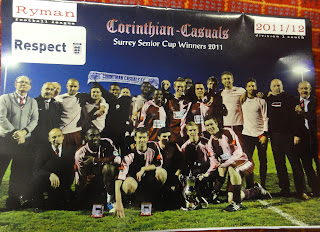 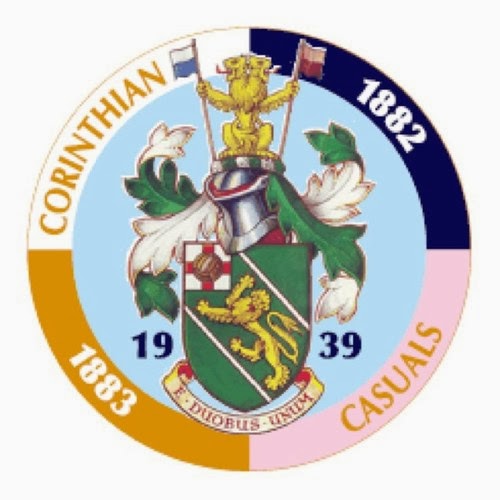 Rule 7. The club shall not compete for any cup or any prizes of any description whatever.


'' Their strict ethos of playing in the name of the sport  meant they refused on principle to join the Football league, enter the FA Cup or play any match that involved prize money or serious competition of any kind. ''


Imagine the scene, Manchester United on the final day of the Premiership season require only a victory to become English champions. Hated rivals Liverpool are holding them to a goalless draw at Anfield and with injury time nearly up they launch a last minute desperate attack deep into the oppositions half.

Seconds remaining, the goalkeeper cleverly beaten commits a cynical foul from behind in the penalty area and denies the United forward from putting the ball into the empty net. With the pressure building the ref nervously looks round but has no option but to blow the whistle for a stonewall penalty.

Sir Alex Ferguson face contorted and clearly in a rage shouts from the technical area for his players to gather round. With an eerie silence around the ground there is a brief moment of confusion but it becomes evident what has unfolded. 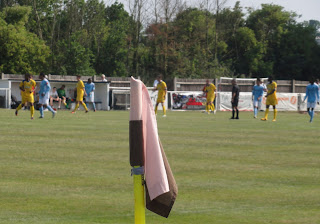 After a session of having his hair blow dried the United captain slowly approaches the ref to inform him that in the spirit of the game he has been instructed not to take the penalty as this is unsporting and requests the game restart from a goal kick or alternatively the penalty taker will purposely miss and pass the ball back to the keeper.
Although breaking the rules the ref sportingly agrees awarding a goal kick to Liverpool and with Fergies approval effectively warding the Premiership to United's arch rivals Manchester City. 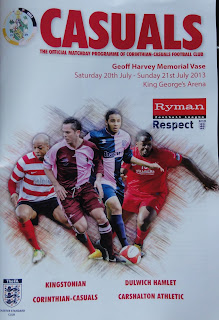 In these times of winning is everything philosophy and money orientated sport such a story may seem too far fetched yet in the early pioneering days of soccer such a club was applying these noble ethics and practices to the developing beautiful game. 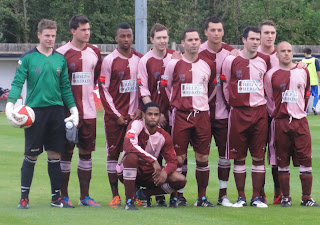 The Corinthians or Corinthian FC made up of mainly of old public school boys were formed in 1882 and were primarily set up to challenge Scotland's then supremacy in the game and only to play friendly matches against amateur opposition .

Their strict ethos of playing in the name of the sport  meant they refused on principle to join the Football league, enter the FA Cup or play any match that involved prize money or serious competition of any kind.

Purist values although commendable were not always appreciated by the newly formed League and by the late 1800s seen as pariahs and misfits in the sport they were eventually ostracised and forced to tour the world having been banned from playing English clubs at home.

Such travels were extremely fruitful in the development of the emerging game and Corinthian FC spawned and influenced the creation of two of the worlds biggest clubs Real Madrid and Brazil's Sporting Club Corinthian Paulista. Both sides still retain the white shirts that were the then colours of this legendary English club and obviously Paulista in honour of their spiritual forbears the name Corinthian.

They hold many records including the most players from one club representing England and beating Manchester United 11, 3 the Red Devils heaviest ever defeat. Probably they could also lay claim to being the greatest team never to win the FA Cup. This was not only due to their non participation but the fact that they beat Blackburn Rovers 8, 1 shortly after they had lifted the trophy in 1884 and similarly Bury who they beat 10, 3 after they were winners in 1903.

By 1939 Corinthian FC then amalgamated with The Casuals FC to form Corinthian Casuals. Adopting the Casuals more striking colours of chocolate and pink they have since lived a mainly nomadic existence since their departure from their spiritual homes of the original Crystal Palace and Queens Club in West London ground sharing with various other clubs. Currently they play in the Isthmian League One South Division at Tolworth, Kingston.

With such a rich and distinguished history it is hard to believe that such a legendary club are now playing in a small isolated ground just off a main motorway in Surrey. Having direct links to Brazilian Behemoths Corinthian Paulista means that generally the club will always attract the odd South American camera crew throughout the season.
Today is no different as having found their Holy Grail a small team of Brazilian journalists look puzzled and bemused as to the remote and humble surroundings of a club that has reached a mythical status back home.

Trying their hardest to improvise a worthy story they take pictures of the team in chocolate and pink and attempt to interview the two or three players girlfriends in the simple home stand. Confused by all the attention and unaware of the significance or reason of such a visit they politely decline and concentrate on their mobile phones as the game is being played.

Tonight Corinthian Casuals are up against another famous and respected London institution the Metropolitan Police. With the Olympics on TV a small cross section of squad players, off duty officers, girlfriends, spectators and Latino paparazzi ( plus one blogger ) have made the trip to King Georges Field, Tolworth a nondescript area of Kingston. 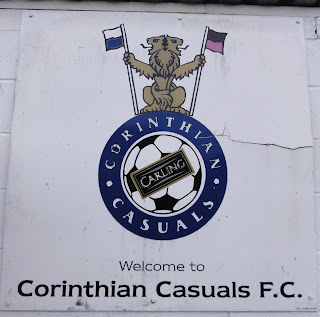 Before kick off an elderly club volunteer staggers slowly around the small crowd giving everyone an updated team sheet before wandering back to the turnstile in case there are any sneak invasions without paying the five pound admittance.

Even as there Corinthian Casuals strike the first goal strangely there is a silence around the ground apart from the bench and a Brazilian cameraman trying his hardest to create an atmosphere. All that can be heard are the cheers of the players and a train that rattles past in the background. Thankfully there are no tumble weeds in Tolworth.

The tea lady rushes out from the club house to check the score before hurriedly returning to boil the kettle and restock the Mars bars. As the match draws on further spectators join the congregation and engage in conversation discussing everything apart from what they are watching before them. 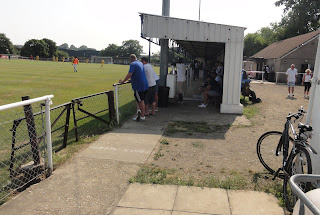 Gradually the darkness draws slowly in the floodlights are begrudgingly switched on and with the tea lady's active kettle adding to an unwanted expensive electric bill. A Corinthian trainer behind the home stand worriedly explains to his colleague that he has lost a bag of balls. Unsympathetic his friend chuckles that he will be berated for such an error if he doesn't quickly find the lost items.

If handlebar moustaches and gentlemanly conduct are expected then the founders of Corinthian FC would find it hard to stomach the foul language and occasional illegal tackle evident throughout the 90 minutes.

' The boy's in blue ' are more than capable of dealing with such encounters and short of making arrests are able to counteract with a clip around the ear in return. These antics are simply the proof that even noble teams like the Corinthians and Met Police have to adapt to the times but their commitment and importance to amateur football remains intact.

However the English legends over come the strong arm of the law and after their two goal lead is clawed back they are able to strike a deserved winner 20 minutes from time. 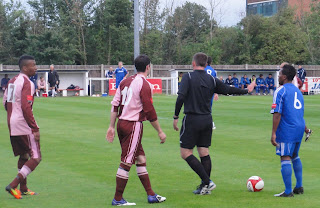 After the match most of the crowd head into the darkness and light rain to locate their cars. The players briefly visit the club house for a quick drink as the camera crew excitedly at first explore every nook and cranny before leaving unimpressed with the clubs bare surroundings and memorabilia.

A few others dependent on the rails stay on for an extra drink at the bar in the knowledge that the trains are delayed due to congestion at the Olympics and a lost soul that has sadly thrown themselves onto the track.

The floodlights dimming the tea lady come bar woman is able to switch off the kettle. As the old Corinthians in fading black and white photos on the club house wall look proudly on the last few stragglers head off in the drizzly rain towards Tolworth train Station in the distance.

King Georges Field is a small quaint ground alongside a railway track and bedside a motorway in Tolworth. It's also surrounded by a large area of park land that adds to the rural feel of the place. However approaching form the front will mean an ugly stretch of motorway so you may want to take the more scenic route of cutting through the park on the way to the ground ( careful I nearly got lost ). Instead of turning left coming out of Tolworth Station, go right and right again and then navigate through the parkland.

There is a simple seated home stand, a larger roofed terrace behind one goal and a similar smaller structure behind the other. Although the capacity is around 2,500 there is rarely a large attendance and the ground fits the purpose so to speak.

In such an isolated and remote position it does seem that The Casuals have been displaced from their rightful place in history yet the founding fathers would probably be content with such a non commercial setting. 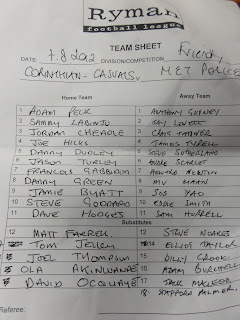 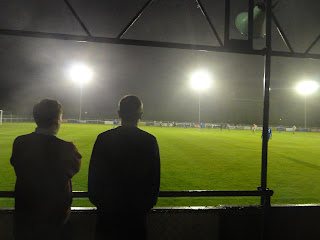