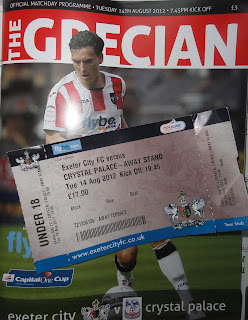 ' No doubt for the supporters real success can only be measured not by their final league placing but by victories against their fellow Devon Opposition. '

Lifting your head carefully above the parapet you would be forgiven for thinking that there is not a war going on. Seagulls screech and soar high above the cobbled streets as a light summer rain begins to fall.
With the tranquil sleepy landscape of Roman walls, pasties shops, medieval churches and American coffee houses Exeter has all the hall marks of a typical historical English country town. Yet wandering down the main high street a small clue is given by peering into a local betting shop. Centre piece of the window proudly puts odds on the chances of it's local club to achieve promotion and to better it's larger county rivals Plymouth and Torquay United in becoming top dog in Devon.
Strangely against the odds and over the border Somerset's Yeovil Town are currently the area leaders yet City since last seasons relegation are gearing up for a promotion campaign and challenge for outright supremacy in the South West.

For here refreshingly there is life outside the Premiership and the forthcoming Devon Derbies and League Two campaign is clearly the main focus of the counties football mad population. In this part of the world higher divisions are simply something you ever see on the TV along with the X-Factor and it seems there is thankfully a distinct lack of Man. U shirts on the towns younger football fanatics. Since the publicised demise and financial ruin of the traditional Devon footballing giant Plymouth Argyle a great vacuum has been created and the Grecians have declared war on both it's county neighbours. 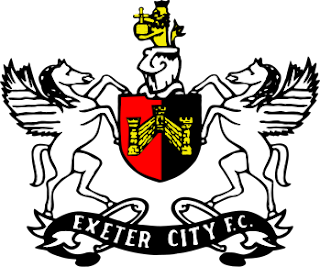 Since 2006 under the guidance of statistically their greatest ever manager Paul Tisdale, Exeter have admittedly been punching above their weight. Having secured back to back promotions after returning to the Football League Tisdale somehow managed to defeat the odds and keep the Grecians in League One for two seasons. Even with his maverick ideas he was unable to sustain Exeter's stay in the division and for this campaign with some unexpected shrewd wily deals is again planning a quick return. Never in the history of the club have they ever managed to reach the second tier in English football but in a capable, loyal and respected man like Tisdale hopes are high such heady optimism can become a reality.

Part of this possible master plan is recalling back 36 year old Jamie Cureton for his third stint at the club. Obviously with his best days behind him the ex Reading and Norwich veteran can be cleverly utilised in a similar way Kevin Phillips has been used at Blackpool and this proven scorer may well guarantee City a few crucial goals in the coming season. 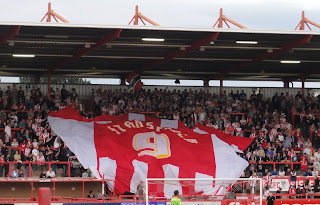 Apart from Cureton, Tisdale can rely on a wealth of experience including ex Southampton Matt Oakley and more notably Spaniard and ex Swansea Guillem Bauza. Mixed in with a few débutantes, triallists and a crop of youngsters showing bags of potential time will only tell if the Exeter bosses acquisitions are a shrewd investment or a bunch of ageing flops condemning the Grecians to another year in League Two. Recent history proves that this knowledgeable man knows what he is doing and such buys may well prove to be a touch of genius.

Today Exeter face Championship side Palace in the League Cup who themselves will use tonight as a testing ground for the season ahead. 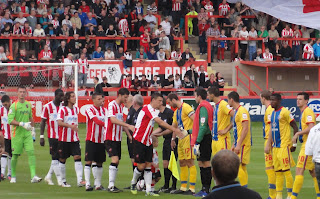 Although passionate about their club and football in general Exeter are well known for their friendliness and hospitality and a mixed set of supporters drink happily away in quaint English pubs around the the area of the ground. The locals typically guzzle down pints of cider seemingly confident for the months ahead.

Palace on the back of some notable transfers out of the club including Darren Ambrose and promising youngster Nathaniel Cline come to St James Park with a somewhat unknown and depleted squad. Their fans although merry quietly hold reservations about improving upon on their mid table finish the previous season. With Manager Dougie Freedman making a few short cameos in pre season friendlies there is even speculation amongst some that he may well have to put on his boots again as a result of lacking adequate fire power and to booster a very much weakened attack.

A notable returnee to Exeter is their popular ex defender and local boy Dean Moxey now plying his trade in the Championship with Crystal Palace although his time with the Eagles since being transferred from Derby County has been plagued with injury. 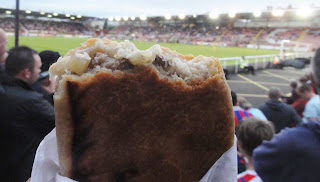 Before kick off fans of both sides revel in the summer warmth and shorter nights. After a disappointing European Championship performance by the English national team and being overshadowed by the recently finished Olympics there is a general feel good factor around St James Park.

The Londoners have brought a large contingent of around a thousand with them to Devon contained tightly in an inadequate away end that resembles a narrow passage way. Yet oblivious to the cramped conditions a small group of around 20 Palace Ultras bang drums and chant songs creating a vibrant atmosphere. Later they even attempt to recreate their own version of the Belgrade Derby by letting off a solitary red smoke bomb much to the annoyance of the usually lethargic stewards.

Above them some lucky locals view the proceedings free of charge from their second floor bedroom windows ( probably making up for the amount of broken windows they have to endure over the season ). It would be interesting to know if any ever charge their friends for coming round or even the possibility that cut price season tickets are on offer supplied with a sofa, cup of tea and scone.

At the opposite end vocal Exeter fans unravel a giant team shirt flag that slowly sails across a sea of local support as the teams emerge from the tunnel. For a disappointing attendance of three and half thousand the noise generated by both sets of supporters is above average helping to entertain what was to be in truth a below average game. 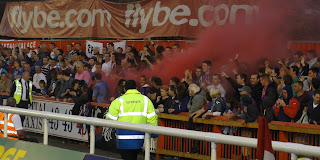 Exeter were quick to capitalise on a shaky and untried Palace defence. Missing their needed and charismatic captain Paddy McCarthy and goalkeeper Julian Speroni the Eagles struggled to cope with Exeter's sleek and neat football. From the start City stunned Palace and went deservedly ahead from a header by John O'Flyn in the second minute. For the next twenty minutes the South London side looked anything but two leagues above Exeter and were lucky not to go further behind. Only the creativity and attacking runs of striker Zaha enabled Palace to claw themselves gradually back into the match.

Luckily for the away side City were penalised harshly for a hand ball in the area and Jermaine Easter converted from the spot to make the score level. With half time looming Palace midfielder Dikgacoi playing unusually on the flanks instead of a central midfield role headed into an empty neat. The second half proved to be uneventful with the Championship side using their superior defensive play to kill off the game and secure a victory but still leaving questions as to their chances of making any significant inroads this season. Cureton came on in the 62nd minute but was unable to make any sudden impact. Early days for the veteran but his experience and natural goal scoring attributes will surely benefit his younger team mates.

Exeter though not gaining a victory were able to come away looking the more likely to achieve success over the coming months. Realistically their attempts will be made more difficult by the amount of derbies and matches against near opponents like Bristol Rovers. No doubt for the supporters real success can only be measured not by their final league placing but by victories against their fellow Devon Opposition. Forget your modern pasta diet for any army that is nourished by the local pasties and clotted cream then even by South Western standards this is going to be one hell of a civil war. 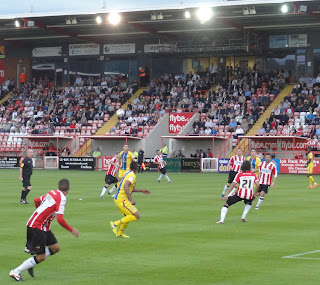 Cost of ticket ( away terrace ) £17. Away stand £21
St James Park. Although a little cramped it did have a buzz and still retains a certain amount of character as opposed to a bland new stadium. 7 out of 10
The highlight for all was getting to half time and trying the famed Devon ( sorry Cornwall ) pasties. At first disappointed no pies were for sale but these beauties made up for it.
9 out of 10.
No floodlights. 0 out of 10 ( missing the pylons ).
Excellent club programme £3. Full of articles, stats and facts and very few ads  9 out of 10
Nearest station. St Davids Exeter or Exeter Central. 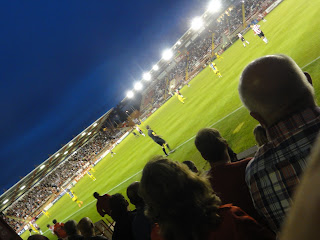