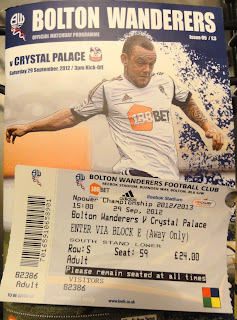 Apologies to those expecting an in depth write up on the legendary Bolton Wanderers but due to a busy schedule only a basic review and report will be forwarded. Hope one day to extend on this piece. 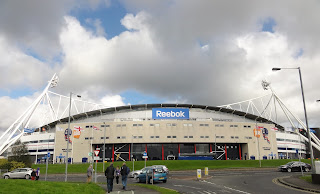 With Owen Coyle under pressure to produce better results it was a good opportunity to answer his critics by beating an inform Palace side on equal points. Not so much of a mid-table clash as more of a Championship top end contest. A cluster of around six to seven clubs are only four or so points off the lead and any sustained challenge could place today's combatants into the play off places. Bolton stalwart Kevin Davies was making his 700th appearance for the club and his involvement today proved that he is still the most influential figure in midfield for the Wanderers.

The game coughed and spluttered with the away team having the better chances. But it was at the end of the day a case of Palace's Wilfred Zaha being a class above everyone else. His foraging runs and trickery created problems for the Bolton defence throughout the 90 minutes and it was one such run that led to him being awarded a penalty on the 80th minute. Glenn Murray converted to seal a deserved victory for the Londoners. Ex Liverpool striker Ngog ran his heart out for the home side but there seemed to be no link up with midfield and Palace were able to fend off most of the Bolton attacks. Even the aptly named Chris Eagles could not infiltrate his namesakes defence and he and Ngog were disappointingly taken off to be replaced by Korean Choung Yong Lee and Marvin Sordell in the later stages.

In typical fashion the winning team desperate to hold on to three points away from home defended with ten men making the occasional break but content to soak up the pressure. The ploy worked and Crystal Palace came away from the Reebok victors leaving Owen Coyle's future uncertain. 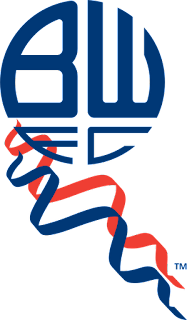 The Reebok is from the outside an impressive and distinctive structure different from other modern sink like designs common place in English football. However inside reveals that the entire mid section has been used for internal corporate facilities sacrificing needed seating for the outside and gives the entire stadium an empty lop sided look. Considering last seasons relegation I wonder what the bookings are presently for the corporate areas in this climate of austerity and recession. I speculate that there are a lot of unsold prawn sandwiches, okay if you are playing the likes of Manchester United on a weekly basis but not quite the same with Millwall and Watford.
It does even with the planning restrictions holds an impressive 28, 723 and the seating is spacious and comfortable. Some areas are a little open to the elements but that would be the only other criticism of this interesting ground.


Cost of ticket. £24 ( away end )
Cost of programme. £3. Usual standard publication with some nice write ups for both home and away fans. 7 out of 10
Cost of peppered steak pie. £2.50 . 8 out of 10. Unknown brand but lovely thick crust with ample meat filling ( a worthy substitute considering they had sold out of balti's.....boo ! ).
Reebok Stadium gets 8 out of 10.
Floodlights. Modern but inventive. 6 out of 10
Heard also that the stewards could be a little on the fussy side. Have to say that I saw no evidence of this and the one's I encountered were helpful and friendly.
Update: Other supporters in the away end have informed me that some fans were in their opinion unnecessarily ejected from the ground before the game started.

Nearest train station. Horwich Parkway. Do not attempt to walk to the Reebok from Bolton its a very long way. Return ticket £3 on football special. 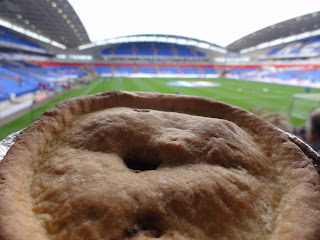 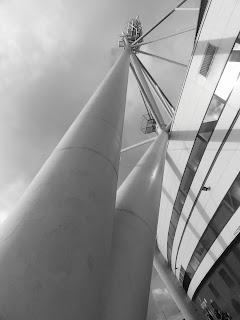 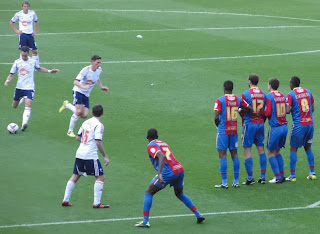