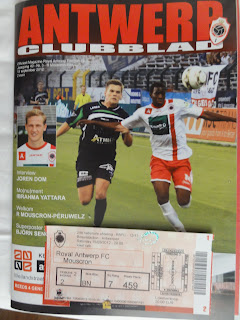 A BEGINNERS GUIDE TO WATCHING FOOTBALL IN BELGIUM ( PART TWO )

' Supporters balancing armfuls of beers miraculously navigated up and down the seating through the crowds looking for their friends without hardly spilling a drop. '

If the club that represented Belgians second largest city Antwerp were everything like it's great noble host then Royal Antwerp FC would be firstly pretty, sophisticated, inspiring and brilliant. Currently with the team lying in the Belgian Second Division, none of these would apply and disappointing, sleeping giants, average and frustrating would be more appropriate.

Being Belgians oldest football club then historical pedigree could only truly apply if they could reflect their oldest established team in Belgium status by becoming a consistent force within Flemish football.

What irritates Royal Antwerp further is arch city rivals Beerschot AC relative success in Belgians top division. Being the last Belgian club to reach a UEFA final in 1993 what is certain that with such a large fan base craving the success of it's Brussels and city rival the second tier is far too small for a club of this stature to be continual under achievers.

There are also strong connections with Manchester United who use the relaxed Belgian player permit laws to trail out potential stars of Premiership ability before their break into the big time. A current list of Premiership players that have benefited from the United-Royal partnership include John O'shea ( Sunderland ), Alan Tate ( Swansea ), Fraizer Campbell ( Sunderland ) and John Cofie ( on loan to Sheffield United ). 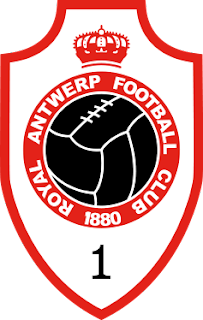 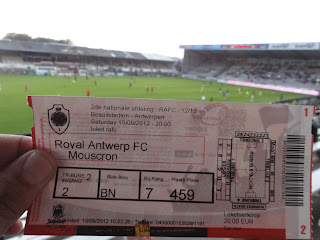 From the first moments of entering Antwerp by train you realise that this is a special place. The cathedral like station alone is enough to take your breath away and a tourist attraction in it's own right. It sets the standard of what is to come and if expectations are running high after arriving at Centraal Station then you will not be disappointed by what is to come.

From the great Art Nouveaux zoo next to the station there is a gradual build up of impressive architecture and wide pedestrianised streets as you approach the city centre and the grand finale the seventeenth century Market Square. It is more pleasing to the eye than Brussels having not so much of a clash of post modern bland meets Nouveaux and being fortunate not to have been half bulldozed down in the nineteenth century like the capital. 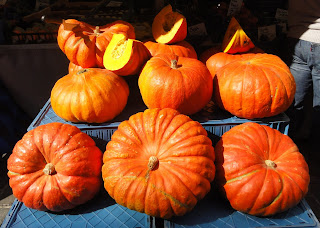 When the sun is shining both tourists and locals frequent the outside bars and cafes all over the city giving the entire place a rather laid back and sleepy vibe compared to the business like Brussles. Love struck young couples hand in hand explore the mainly Jewish diamond sector looking for a bargain ring and weekend trend setters amass in their thousands along the Mier, one of the most famous shopping streets in Belgium.

Off the beaten track there are some notable markets selling local produce including Boterkoken a type of sandwich which you can fill with such delights as mussels and curry ! 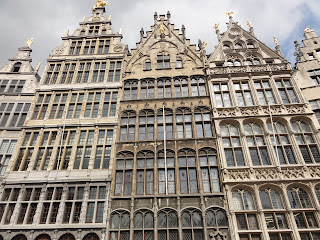 Where as the previous nights game in Tubize had been more of a family affair the match at Antwerp was more of a boys night out. The weather was kinder tonight and this was reflected in more activity outside before the game. Rather like English football small crowds of loud, colourful fans congregated around bars and pubs near to the ground drinking and singing although some of the music tilted uncomfortably towards the cringe worthy Euro Pop variety ( something that would probably not go down too well in Bermondsey or Scunthorpe ). 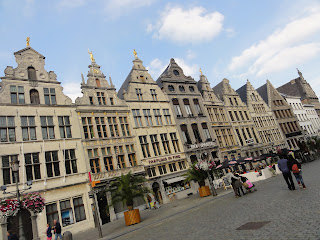 If Royal's ground the Bosuilstadion was like Antwerp then a huge museum type or Roman coliseum would be expected. Pleasingly what you actually get is a slightly run down old traditional English ground, four classic stands and prominent floodlights with pylons. One unfortunate tower had apparently previously blown over in high winds and this was replaced with an odd looking structure out of sync with the others.

Built in 1923 the Bosuilstadion has a capacity of just over 16,000 with an allocation of 2,596 standing. Lying on the outskirts of town in a mainly residential area the stadium should be roughly half an hour or more by tram from the city centre although the last wave of manic Saturday night traffic caused a few delays. 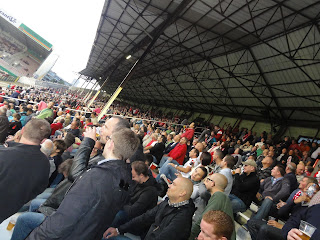 Up until this point ( music aside ) you could be forgiven for thinking this was a typical English Championship or League One match. Yet entering the stadium the atmosphere was both intense, noisy and relaxed all at the same time. Supporters balancing armfuls of beers miraculously navigated up and down the seating through the crowds looking for their friends without hardly spilling a drop. One end of the Main Stand actually looked like it was on fire due to amount of smoke spilling over the roof due to mass tobacco ( maybe other substances too ) exhalation. Although the general chit chat was in Flemish sections of the crowd would then break out into familiar football chants like ' Come on feel the noise ' in almost perfect English with a strange cockney tinge.

The best comparison would be to say that this was more like going to a party or down the local pub with live football on show instead of the TV variety. Only the few VIP spectators enclosed behind thick glass seemed sadly detached and oblivious to all the goings on outside. 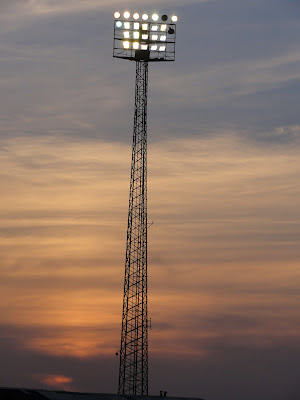 Tonight's opponents high flying Mouscron like Antwerp have strong connections with another club this time being Lille in France and field a number of their players in the first team squad. From the kick off it was apparent the home team were not going to get everything their own way. While Antwerp had the dazzling talents of Manchester United loan player Gyliano van Velzen to rely on, Mouscron came to the Bosuilstadion determined and organised. Frequent attacks from the home side were broken down and gradually confidence slowly grew in the Lille reservists and they were able to create a few good chances for themselves. 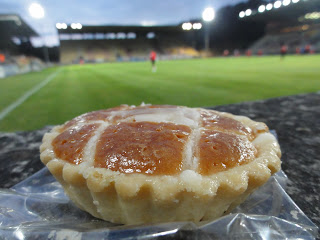 The home crowd witnessing such events grew increasingly frustrated and vented their anger towards the players. This seemed only to assist Mouscron further and just before half time it came as no surprise that they were to go a goal up further incensing the partisan home support. However the mood again changed at half time and the Antwerp supporters focusing their attentions on other things reverted back to party mode unlike what would of happened back here where probably the English crowds would of remained solemn and quiet. The small pocket of lively Mouscron supporters contained behind the goal also continued to chant and wave flag and banners throughout the interval and as the teams emerged for the second half it was business as usual for the vocal red and white army. 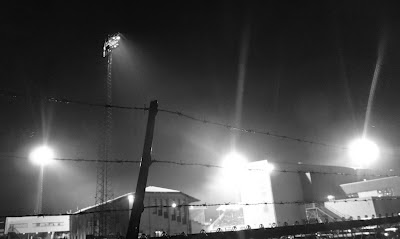 At the outset of the second half it was more of the same as Mouscron continued to frustrate the home team. Yet with victory in sight the away side began to make silly mistakes and concede procession in dangerous areas. On the 90th minute Antwerp made a last ditch final attempt to salvage a point. Crossing a delightful ball into the Mouscron penalty area the defence in panic tried to clear the ball to safety only managing to divert the ball into their own net. Relieved and jubilant the home fans erupted yet on reflection such average results will not sustain a serious challenge for promotion.

Not knowing Antwerp's financial situation it is difficult to say how the club will progress to the Belgian Pro League. An obvious injection of cash is needed and judging by tonight's somewhat lack lustre performance the sooner the better. Although characteristic and pleasing for the grass roots fan the ground too is in dire need of being upgraded to reflect the cities grand status and potential catchment area. 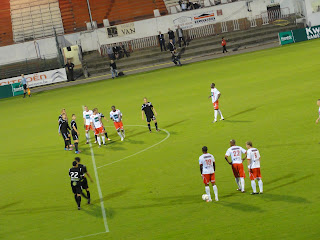 To conclude on a first time experience of Belgian football then from the Pro League right down to the Third Division and beyond you cannot be less than impressed. Although standards are slightly inferior to other top European leagues Belgian football holds a stronger connection to the average supporter pandering less to sponsors and corporate cash. The price reflects this and most games should fit into most people's budget which is why there is a continued interest from the U.K in travelling to this interesting country.

In many ways older British football fans visit for nostalgic reasons reliving a time in our own domestic football that will probably never return or exists now at only the lower levels of the game. 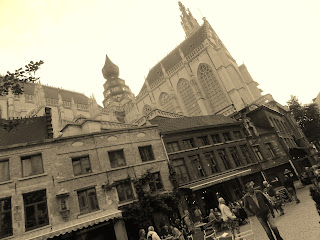 Many thanks to Hans ( HANS ON TOUR ) and Steph for added information.

Cost of Match Ticket. 20 Euro's
Bosuistadion. Good traditional football ground although a little tired. A must see for all of you wanting to recapture the old days. 8 out of 10
Match day Programme. 2 Euro's. Large A4 size publication with updated team sheet obviously in Flemish. 7 out of 10
Pre Match Turkish kebab. 5 Euro's. 2 out of 10 ( Disgusting )
Floodlights. The one's I want to see. 8 out of 10
Cost of return train ticket to Antwerp from Brussels.  7 Euro's 80 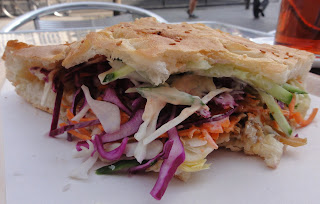 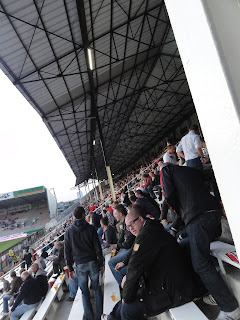