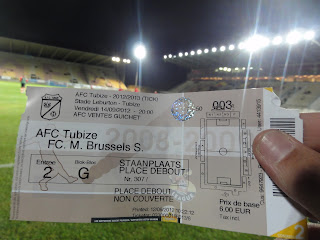 A BEGINNERS GUIDE TO WATCHING FOOTBALL IN BELGIUM ( PART ONE ) 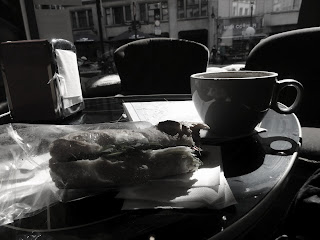 With Belgium on the brink of becoming a world football power there is no better time to venture across the English Channel and sample a game or two for yourself. With a substantial crop of gifted young players in their early to mid twenties such as Everton's Marouane Fellanini, Man City's Vincent Kompany and Chelsea's emerging superstar  Eden Hazard justifiably there is talk that this could be the beginning of a new golden generation.

Cheap Eurostar weekend package deals for less than £150 means in theory a weekend of football can be enjoyed for the cost of a day at Stamford Bridge. With an extensive and complicated league structure it is possible to plan a series of games from a Friday to the Sunday or simply to nip across for a solitary match and return on the same day. Being a small country Brussels the capital is the ideal transport hub to venture out to other prominent football destinations across the country reaching most within under an hour. 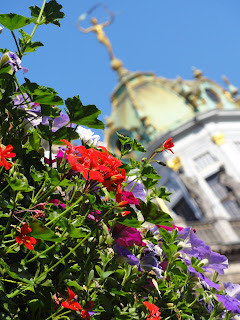 Brussels itself can be likened to a once glamorous ageing Hollywood actress that after a series of unnecessary plastic surgery now smokes a lot and under lots of heavy make-up smells of wee. Indeed there is no coincidence that the national iconic symbol of Belgium and Brussels the Mannikin Pis ( a statue of a little boy relieving himself ) on top of eating croissants merely reflects a popular past time for the male population. While the guys go out drinking painting the town green the ladies seek solace in their canine companionship as it seems the unlikely couples are everywhere. There is a pro dog friendly policy across the city and it is a common sight to see a ( wo )man's best friend in bars, cafes and restaurants.

For all you food connoisseurs one particular dish anguilles au vert is a must try and is an upmarket version of London's pie and mash but with out the pie ( eels in a thick green sauce ) and more famously the beer and mussels in Brussels are acknowledged as the best in the world.  For those with a sweet tooth then naturally waffles, chocolate and biscuits are a necessary God send.

But it would be unfair to judge the capital by a few bad odours, furry friends and an unhealthy indulgence in waffle consumption, peel away a few more layers and what lies beneath is a vibrant city full of culture, art and decent coffee. Definitely a place you would like to come back to again and again.

For this weekend in question Belgium football giants RSC Anderlecht were playing away which gave an ideal opportunity to firstly topically focus on AFC Tubize playing in the Belgian second tier, the club that spawned the talents of a certain Eden Hazard. 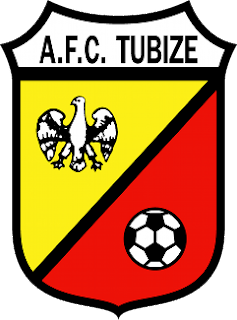 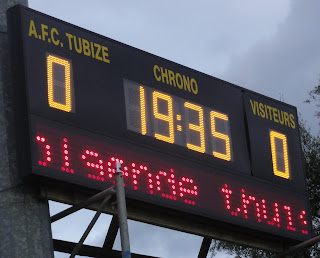 Tubize lies half an hours train ride from Brussels and can best be described as a typical post industrial town with a proud past history of manufacturing steam locomotives.

Before the game commuters returning home from the capital casually sat across from the station on the side-walk outside local bars and café's. Yellow and red Tubize scarves were proudly on display hanging off a few shoulders and apart from the repeated sound of a solitary horn from a merry supporter the scene was quiet and peaceful. An hour before kick off a few started to leave for the one kilometre walk to Stade Leburton the home of AFC Tubize.

With a tiny population of around 22,000 the stadium has an adequate capacity of 9000 but for tonight a small but respectable crowd of just over 600 plus a handful of fans from Brussels had turned up on a warm but damp night.

Beside the car park there was a clearing that was used for what can only be described as a surreal mini theme park with outlandish, giant caricatures playing a game of football. The nations obsession with cartoons knows no bounds and this was a quirky and novel introduction to Belgium football. 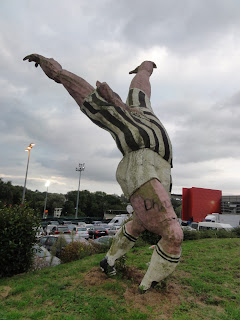 The club house behind the goal and flat standing terrace was a hive of activity and from this moment there were very few comparisons with English football as smoking supporters entered the pitch area with a good supply of alcohol and fast food. As the time approached to kick off due to the increasing rain many had retreated back to the bar and continued to watch the proceedings from inside.

The Tubize ultras situated in the smallest covered stand at the side of the pitch created a marvellous atmosphere and for what they lacked in numbers they more than made up in colour and the noise generated. Opposite in the new stand Tubize's more affluent support sat in comfort quiet and sheltered away form the rain and drizzle but appreciating the efforts of their more vociferous fans.

Tonight's opponents FC Brussels have recently sparked up a lot of controversy in domestic football by achieving promotion by taking the identity of another club in a situation that is very similar to how the MK Dons were created but a whole lot more complicated. Their handful of supporters resembled social pariahs sitting solemn and ignored in the largest covered stand behind the goal. Unfortunately for them their night was going to get worse. 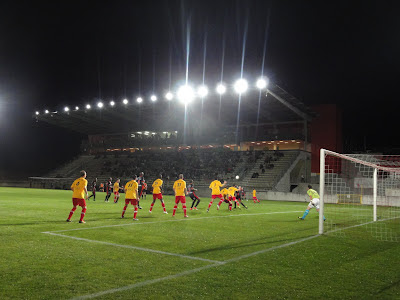 Bottom of the table FC Brussels were able to hold there own during the first moments of the match and looked dangerous on the counter attack with two pacey strikers up front. Yet gradually with the fantastic support of the 12th man Tubize came more into the game and by half time were one nil up.
At the interval the ultras downed their banners and flags and then proceeded to down more pints. Brussels fans on the other hand had only the feeling of going down.

Thankfully the weather had improved and more of the terrace ticket holders ventured out onto the area behind the goal eating and drinking but with umbrellas at the ready. Children had started to play a football game of their own below the floodlights as their parents chatted amongst themselves.

By the time the teams emerged for the second half there was a healthier presence around the pitch and the home team responded accordingly. Taking the game by the horns they were able to dominate and harass the Brussels defence constantly throughout the last 45 minutes. Scoring another two superb goals to go three up they were unlucky not to end the game with a higher score line.

Cuckoos are a species of bird that transports it's eggs into the nests of other birds. The usually large cuckoo chick is fed at the expense of the rightful chicks only for them to become malnourished or even to die of starvation. If there is any justice then the footballing cuckoo equivalents like FC Brussels and MK Dons should not profit through such methods.

Instant success can be bought but any long term strategy depends on good firm foundations and the support of the fans. MK Dons have gone a long way in making amends for past errors by returning Wimbledon's history and trophies back to SW19. Maybe FC Brussels can learn by such lessons and assist the club it once helped to terminate but that remains
doubtful. 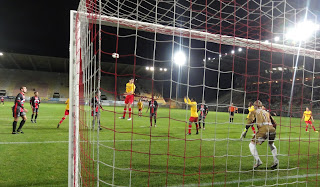 Tubize for their small size and population are unlikely to progress further up the league yet surprisingly they hold a healthy mid table position. They are also the only club from the Wallon Brabant region to of recently reached the Belgian First Division although their stay only lasted one season.

They have a decent squad of gifted footballers yet if recent history is anything to go by then anyone showing potential are usually snapped up and whisked off to a bigger club. Eden Hazard never played for the first team instead with his parents consent and encouragement due to better facilities was sent to Lille in France as they rightly believed this was the best way to improve his career.
Currently his youngest brother seven year old Ethan is playing for the Tubize youth academy, 19 year old Thorgan has joined Eden at Chelsea via Lens and 16 year old Kylian is on the books of Lille.

For the second part of A beginners guide to watching football in Belgium we will be looking at current under achievers and Belgium's oldest club Royal Antwerp FC. 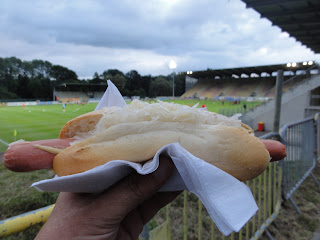 Stade Leburton gets 8 out of 10. Decent ground for a small club with more than adequate facilities. Cosy and friendly little club house that looks out onto the pitch.
Train ticket. Return from Brussels du Noord Station 8 Euro's
Floodlights. Modern type structures with lighting across the two main stands. 5 out of 10 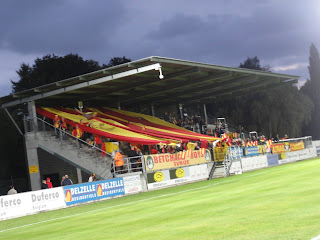 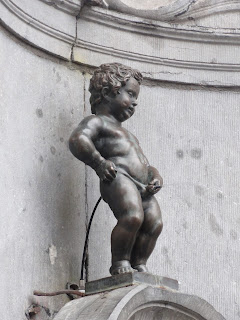