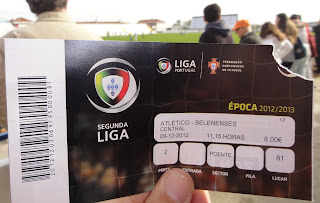 With the national media focusing on Monday' nights rescheduled Lisbon Derby between Sporting and Benfica, few were aware that another important derby from the capital was being played the day before. Second Division table toppers Belenenses were to play fellow city rivals Atlético Clube de Portugal. 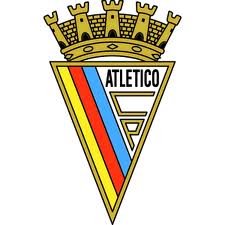 Sunday morning is an unusual  time for a football match and for good reason. Bedraggled and hungover supporters made their way sluggishly to Atlético's ground, the Estádio Tapadinha. Under crisp blue skies excited, wrapped up children in club colours accompanied their sleepy parents while elderly fans angrily quarrelled amongst themselves for no apparent reason.
Being in the flight path to the main airport, aircraft noisily approached the ground like low level bombers and heads were constantly raised upwards throughout the day.

Eagerly the away fans from Belem although slightly muted had arrived early and in far greater numbers. It was clearly evident that Lisbon's third biggest club were desperate for promotion back to the Premeira League to once again lock horns with their two neighbouring giants. Atlético were here to put their rivals in their place and to remind them that such aspirations were premature ( for today at least ). 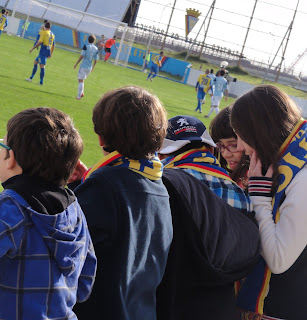 With the country gripped in a major recession and victim to a series of national strikes, austerity measures are taking it's toll on a battered population.  Graffiti and political slogans abound around the city and thankfully the cost of this match doesn't effect the pocket too much.
Apart from the the big three, football attendances have never been high in Portugal but now many lower league or smaller clubs like Atlético are beginning to feel the pinch. 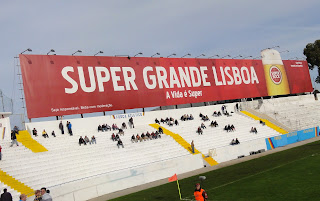 The stadium was like something that had been retrieved in a giant time capsule. In many ways it reflected on Lisbon, crumbling and decrepit yet nostalgic and full of character. A queue of fans waited patiently outside a small white concrete building that reassembled a Hobbit home to buy their tickets. Money would simply be handed over to a tiny hole in the wall and from the darkness a hand would appear with the required tickets. 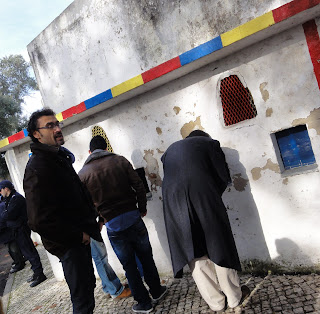 Within the bowels of the stadium the walkways were dark and damp that in the summer would of been a sanctuary from the hot sun. Today however only a few were to brave the cold of the inner sanctum of the Tapadinha. Most of the supporters quickly made their way to the pitch area to bask in the winter sunshine.

The ground was a simple stepped concrete bowl with one small covered stand. It seemed that three quarters of today's attendance were uncomfortably squashed into a small away section. Half the stadium was unused but it was unclear whether this was down to health and safety or simply to contain the crowd into a smaller area for practical reasons. The family oriented home fans sparingly occupied the terraces, many taking due care not to sit on the damp concrete steps in fear of wetting their backsides.

Amazingly Atlético had recently returned back to the Tapadinha due to the stadium being renovated. One can only imagine on the poor condition the place must of looked before the essential repairs. 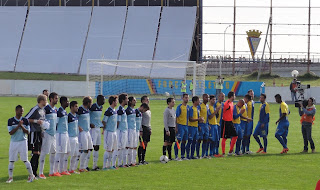 The police had arrived in fairly large numbers too, but such a presence seemed unnecessary considering the fairly good relations between the two sets of fans.  Focus was aimed solely at the pitch and mainly as a result of snobbery and arrogance both factions on the whole ignored each other throughout the 90 minutes. 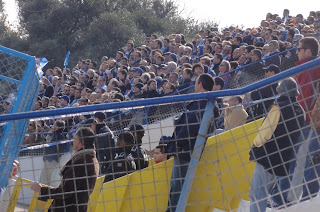 As the teams emerged the Belenenses fans erupted, disturbing the relaxed ambience of the stadium. Blue flags and banners were waved enthusiastically accompanied by the usual chants and songs. With at first what seemed like loud echoes, unnervingly some of the noise reverberating around the ground was eerily coming from the abandoned sections. Had Atlético called upon the services of the un-dead for a more pleasurable match experience ? Or was there simply a more logical explanation ?
To generate an improved atmosphere Atlético had installed a P.A at one side of the ground that recorded the noise of the away support and played it back the opposite side. An ingenious attempt at stereo sound football or a cheap ploy to enhance non eventful matches ? 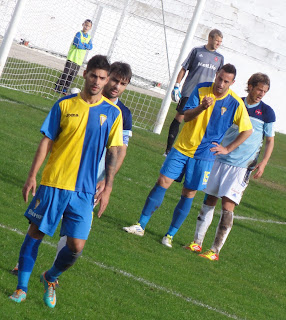 The game kicked off with many of the home supporters still arriving. Many seemed unconcerned with the action on the pitch and casually made their way to favoured viewing spots around the concrete arena. As the game proceeded Atlético fans mustered up an improved reaction and the players responded in kind.
Easily dominating the early stages of the match Atlético went a goal up in the 13th minute only to pegged back three minutes later as Belenenses equalised against the run of play. 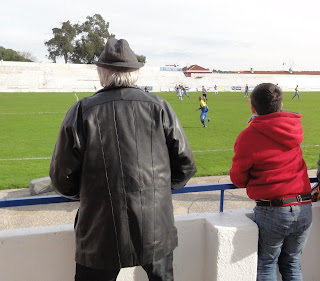 A section of mainly children standing at pitch side were infiltrated by a group of older intoxicated members making their opinions felt through gestures and vocal insults. One elderly gentleman probably released from the shackles of domestic servitude reacted as though what little life he had left depended on the result of the game. His face red with rage every time Belenenses had procession, first aiders looked across worryingly at his state of health.

A penetrating forage into the home sides half by Belenenses defender Nelson was cut short as he was hacked down by a forceful challenge. The momentum brought him painfully into the hazardous outer area of the pitch where he lay in absolute agony. As he received aid by a physio, unsympathetic fans ran down from the terraces to chastise him for what they viewed as over dramatics.

The fall of Nelson 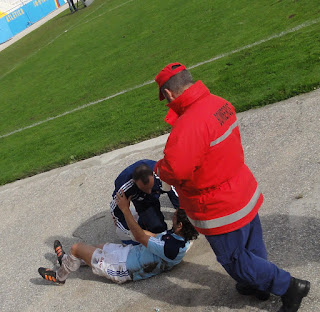 Again Atlético made the most of their procession by a spectacular 25 yard volley by Rui Varela to put the underdogs 2, 1 up. The home side gradually began to let down their guard and just before the half time break Belenenses again equalised.

At half time there was a rush for refreshments although here it seemed pork rolls and popcorn were more popular than the standard hot dogs and burgers. It came as a relief that many of the supporters were just glad to stand up and dry out their sodden trousers from sitting on the damp concrete steps. 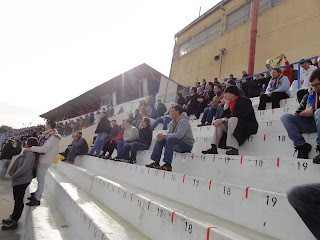 Belenenses emerged for the second period looking more determined, probably as a result of a half time talk grilling by their Dutch manager. The second Division leaders began to impose their authority onto the game by a combination of good passing football and no nonsense defending.

Such a step up meant Atlético struggled to keep in the game and any advances into their oppositions half were rare and unrewarding. Such dominance took it's toll and the away side were able to capitalise in the 62nd minute by going ahead for the first time in the match. The trend continued and as a result of a clever substitution Belenenses went two goals ahead in the 81st minute, virtually ending any hopes of a fight back.

It seems certain that with little more than a consistent run of form will undoubtedly place Belenenses back into the Portugal's top division. Atlético too considering their rapid rise from the lower leagues look to consolidate their second tier position and more than likely with some future added investment eventually progress further. 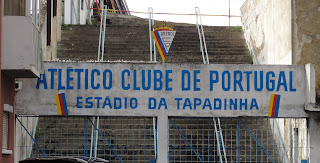 Cost of admission. 8 Euros.
The Tapadinha gets 8 out of 10. A nostalgic trip back in time.
Cost of taxi from city centre. 7 Euros. The Tapadinha lies in what is a mainly residential area of Lisbon and somewhat difficult to locate. However a number of buses were easy to find after the game that took you directly back to the city.
Lisbon is famous for it's egg custard tarts and no visit would be complete without trying one. 10 out of 10.
Flights to Lisbon via Easyjet £70 return. Special offer
Sadly no floodlights or match day programme.

Firstly buy a travel card ( Viagem card ) which should take you to all the important sites via tram, bus and a very efficient metro system. If need be even taxis are cheap and the city is very compact so long journeys are not likely.
Avoid the more touristy spots and keep a look out for where the locals go for something to eat.
Obviously cheaper accommodation can be obtained in the Winter/Autumn periods when the weather is still surprisingly warm. 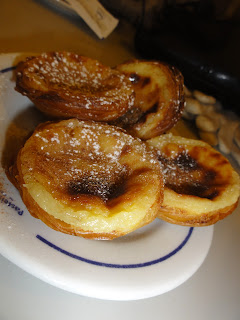 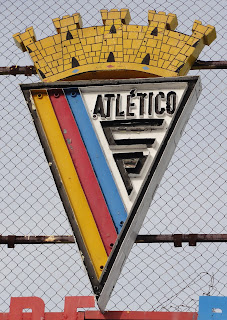 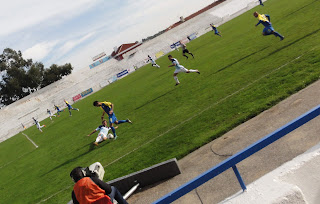