' With a subtle fingers up to all that was MK Dons, the team that wouldn't die had made it's point against the team that many wish would. '


Back in 2004 Buckinghamshire's MK Dons were born in hugely controversial circumstances. Both picking the carcass and stealing the name and history of an established London club, Wimbledon FC,  the club reallocated 56 miles away from the capital to Milton Keynes.

Although seen by many as a sign of the times, effectively it was the first instance in modern English football that such an attempt in blatant business opportunism had succeeded. 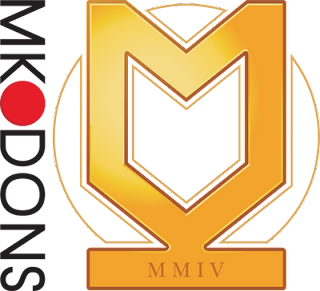 Ironically today the club that rose from the ashes of the extinct London team, AFC WIMBLEDON  are to play M.K Dons, the football franchise experiment that nearly condemned them to oblivion.

This will be the first time the fledging ' phoenix ' club have faced their despised name sakes and feelings are naturally running high. Some Wimbledon supporters have called for a boycott of the game claiming they have already won on principle simply by being in the league. Others are determined to attend in the hope that justice will prevail and the struggling league 2 side will come away from the MK Stadium victorious.

Many simply intend to celebrate the victory of fan power over football commercialism what ever the result on the day. 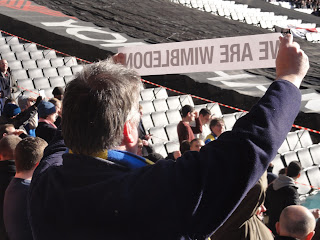 MK Dons fans too feel that they have wrongly been made to seen as the villains when their only crime is the continued survival of a London club that was already doomed to die.The Wombles counteract this argument by accusing the Buckinghamshire fans of hijacking the history and success of their club instead of investing in an already established local non league side of their own.

In the defence of MK, they have now officially relinquished all connections with the old Wimbledon and declared themselves a new football club. Returning all of the trophies and relevant memorabilia of the old Wimbledon FC back to the London borough of Merton in 2007 has done a lot to repair the damage.

People in the Milton Keynes area were simply handed the opportunity of an instant successful football club, something that many others would of taken without thinking of the consequences. It must also be remembered that some were still London exiles who continued to travel in support of what they saw as a continuation of the old Wimbledon FC.

With these factors in mind, slowly supporters groups from across England are begrudgingly accepting the new Dons into the wider football fraternity. 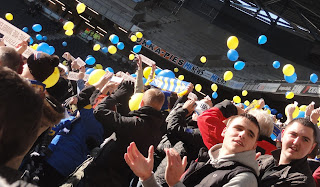 It would be fair to say that both sets of fans were victims. Milton Keynes was specifically targeted because it lacked a top quality football club. By luring the then owners of Wimbledon FC away from London, pop producer Pete Winkelman provided instant league football for the area to befit his new state of the art sports venue.
He has however since admitted that he is not proud of the way football came to Milton Keynes.

That will be of little comfort to the fans from South London that had to endure years of trying to rebuild a club from scratch. Wimbledon officials have already declined any boardroom hospitality choosing instead to sit in the crowd with their own supporters. To some, apart from unleashing Victoria Beckham albums onto the British public this will be seen as Winkleman's most heinous crime, never to be forgiven. 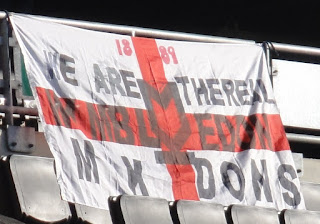 In a way the Wimbledon, MK Dons match will be a derby in the truest sense of the word. Where as for example the Arsenal and Tottenham rivalry is based on nothing but simply geographical reasons and bragging rights, this game is a contest of ideology. Although obviously lacking the numbers and global attention, this and future meetings can compare with the political complexities of an ' El Classico ' or an Old Firm Derby.

ITV have received some criticism for their insensitive promotion of the game which they are to televise on the Sunday. Their usual slap dash and low brow build up to the match has levelled claims that it could potentially attract the wrong kind of attention and also help to infuriate both sets of supporters.

For the so called neutrals today's match will be seen as the people's team versus a cooperate club, Marmite on toast v prawn sandwiches and even Posh Spice v Motorhead.

' You naughty franchisers, you ' 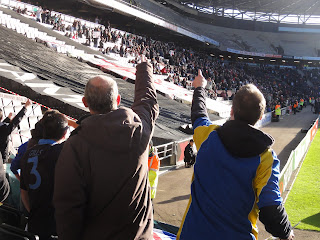 To say this was a derby like no other would be an understatement. Wimbledon are famously known for their friendly fans and today's events created a unique, surreal party like atmosphere tinged with a certain amount of sadness. It can best be likened to an Irish wake or inviting your in-laws around for Christmas. Their attempts at macho posturing and chanting felt awkward yet their collective efforts in restraint from reacting to provocative banners and annoying banter admirable.
Today after all was a celebration of the existence of their club and nothing else mattered.

Although some had refused to go, the Crazy Gang contingent had brought pockets of other supporters from across England in solidarity with the London club. Blue and yellow balloons were cast into the clear crisp skies and instilling the principle of history and identity, hand held signs stating We are Wimbledon were intentionally aimed at the home support. 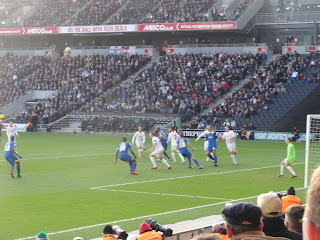 Borrowing some ideas from a team in East London, some cheeky and inventive fans had hired a plane for the afternoon again proudly brandishing a banner with the words ' We Are Wimbledon ' ( in case the point was not made the first time ).

Desperate for an identity of their own MK responded with a chorus of ' Falling in love with you ' ( an old Wimbledon FC fav ) and held banners of their own claiming rights to the defunct clubs history.Yet media and public opinion seemed to be on the side of the under dogs and some of the arguments put forward by MK were without much substance.

With a subtle fingers up to all that was MK Dons, the team that wouldn't die had made it's point against the team that many wish would. 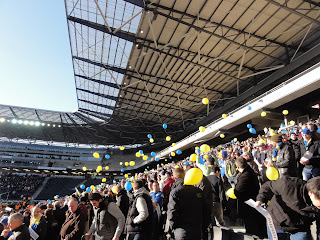 The match kicked off with League 1, MK expectingly dominating the early stages and easily outplaying the struggling League 2 South London club. The first half never really got going until the closing moments when Stephen Gleeson's sweet 25 yard strike put the home side a goal up.

The second half was more evenly balanced with Wimbledon managing to deal with the constant MK attacks. Gradually they were able to muster some rare attacks of their own and levelled the score on the hour mark. Jubilant Wimbledon fans unable to contain themselves ran onto the pitch and celebrated with the players.

Just like their spiritual forbears the plucky little club had upset the experts predictions of a total onslaught from the League One side challenging for promotion to the Championship. Unbelievably thoughts began to circulate around the stadium and the country of a possible rematch at Kings Meadow, the home of footballs moral crusaders .

But smiles were to turn to tears when MK's  Jon Otsemobor managed to steal it in the dying minutes of the second half for the home side and prevent a replay. Mockingly MK supporters could not resist the temptation of having a mini pitch invasion of their own and held up the proceedings for another few minutes.

Lets all have a disco 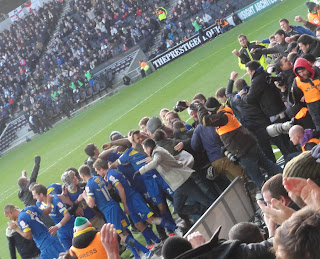 To add salt to the wounds the MK P.A blasted out ' Don't look back in anger ' by Oasis after the game but the desired effect was lost on the exiting Londoners. Although saddened by the result many Wimbledon fans left the stadium in the knowledge that they had secured a moral victory. Nine years of hardship, commitment and perseverance had made this day possible and such attributes make AFC Wimbledon a credit not only to English football but football in general. 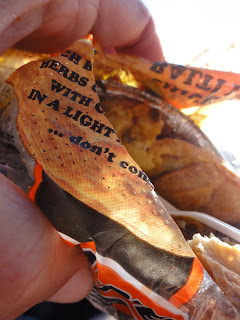 Nearest Train Station: Fenny Stratford ( Local line ) one mile, Bletchley, two miles and Milton Keynes, four miles. From London it's best to head for Bletchley via Euston and either walk ( 30 minutes ) or take a minibus.

Cost of admission £15
Cost of programme. Unknown but keeping in solidarity with AFC Wimbledon fans meant that frustratingly for once I did not purchase a match day publication ( shame about the pie ).
Cost of Chicken Balti pie £3 A boycott was called by some Wimbledon supporters but starvation and
addiction took it's toll. 8 out of 10

MK Dons Stadium 8 out of 10. Still uncompleted but when finished will be one of the finest venues in the country. Lovely comfortable padded seating with great views although restricted in the away end due to the sun ( giant sun blinds needed ? ).
A good word for the stewards too that acted diplomatically and friendly towards the away fans.
Floodlights 0 out of 10. Typical boring modern structure without floodlights.