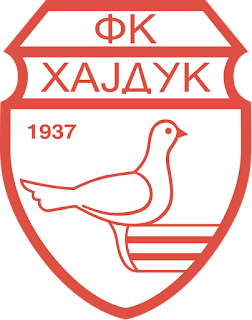 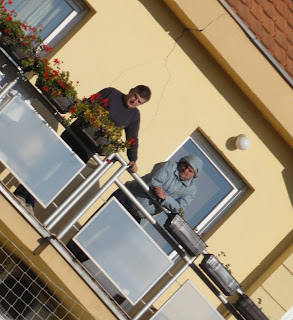 Probably the best balcony in the world

Had enough of the wife's constant nagging and moaning ? Can't hear the football because of the hoovering ? No need to escape down the pub, invite around some mates, buy some beers and just pop outside on to the balcony and watch your local team FK Hajduk play a game.
Not quite Champions league standard or the Eternal Derby but when local boys FK Zemun are the opponents you know that an entertaining afternoon is in store. 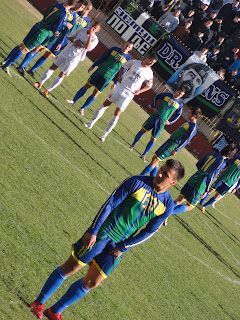 Sunday's in Belgrade are usually quiet affairs especially after the chaos and excitement of the previous nights Derby has just passed. Yet not to be out done by the cities more famous clubs, FK Zenum were intent to let off a few of their own fireworks. There motto of "One city, one club, only Zemun" emphasizes their intentions of resisting the monopoly of the big two.

Another bigger incentive for a win was the fact that Zemun needed a victory to remain on top of the third tier, Belgrade league. 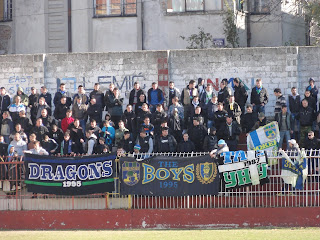 Under a heavy police escort their passionate and vocal fans arrived in small groups at the almost cosy and homely ground of Hajduk. Homely in the sense that the two sided pitch was squeezed between two council blocks, the other two sides being a small terrace ( with a segregated section for the away fans ) and opposite a makeshift stand.

With only a net to stop the ball crashing through a few kitchen windows such matches must of irritated the hell out of some of the residents. Unfortunately for some with an early 11.00 am kick off a few Sunday lie ins were going to be rudely interrupted. 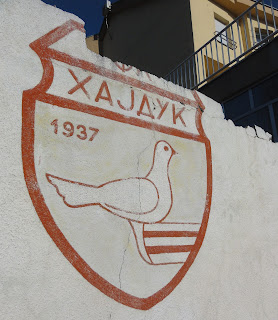 The usual Balkan heavy meat diet takes a welcome break for football and the Serbs instead opt for a more healthy option of Sunflower seeds and nuts. The discarded debris from the seeds littered almost the entire outer area of the pitch and the guilty culprits would continue to chew like guinea pigs for the whole 90 minutes.

The out numbered home supporters gathered mainly in and around the stand which was really some boards and a shelter held up by scaffolding. Apart from some chairs and tables at the back ( officially called the press area ) the Hajduk fans had to risk the danger of possible splinters in their backsides. 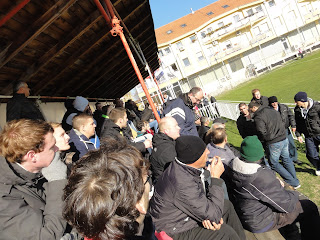 As always in Serbia the subject of the war is never too far away and today marked the twentieth anniversary of  the start of Yugoslav conflict. A minutes silence was respected by the players and the entire crowd although the occasion was used by the Zemun supporters to demonstrate against the recent decision of the Hague to release two alleged Croatian war criminals. 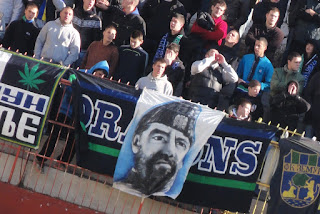 Strangely the Zemun ultras had a few banners depicting the lovable English cartoon character Andy Capp, while another topically portrayed some bearded Serbian army officer. Something tells me he wasn't so lovable and although curious, it was probably best to be on the polite side and not to enquire further about the subject.

Taking away the fire crackers and political undertones, this was the closest comparison to the lower level English leagues. Even the style of football was so familiar as both teams resorted to a more physical and direct approach.

The home team seemed to dominate the early stages and deservedly found themselves a goal up much to the annoyance of the away support. Unlike the day before at FK ČUKARIČKI this game was decidedly scrappy with the ball boys kept constantly busy retrieving wayward balls from neighbouring gardens.  Had the council blocks not been there then Hajduk may well of gone out of business through the amount of lost match balls.

Come on you Pigeons 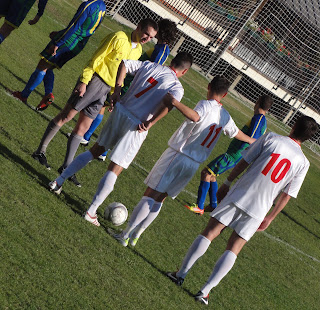 Even the Hajduk club house could of been easily transported back and assimilated into many an English football ground. Around the walls were photos and trophies of better times when the small club nicknamed the pigeons had rubbed shoulders with the likes of Croatian name sakes Hajduk Split. With the bar area full of thick cigarette smoke and a TV showing Ceefax, it was like going back in time to the mid 80s.

At the interval beneath an England flag and Liverpool banner the regulars slowly sipped espressos and beers while debating life, the price of petrol and the game.

Hajduk player of the year award If Hajduk is loosely translated into English as fighter or outlaw, then one of their all time greatest players, Bogic Popovic certainly symbolised this small but feisty Belgrade club.  Being introduced to a colossus of a man that resembled the Incredible Hulk, he proudly pointed to the Liverpool banner and asked if I liked the Merseyside club. Fearfully looking up at two giant dark holes that acted as nostrils, strangely for thirty seconds Liverpool were indeed the love of my life ! 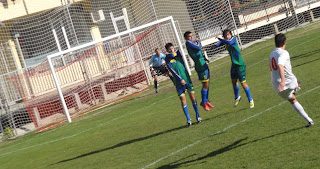 Berated by both the manager and the away support, Zemun gradually took control in the second half easily outplaying the home team. Although physically smaller they were able to dominate through a combination of tactics and agility.

Tell tale passes and killer balls into space had the younger and speedier away side on equal terms in the early stages of the second half. Sensing blood and spurred on by the voracious crowd Zemun took control and scored a decisive winner close to the end of the match. 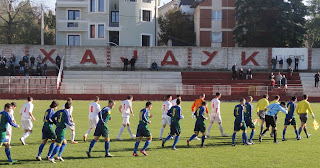 Unable to contain himself the young Zemun manager ran on to the pitch and madly celebrated the goal with his players. On his return to the dug out he was sent into the stands by an unsympathetic authoritarian referee. Doing his best to return as close as he could to his bench he was repeatedly warded off by an official and had to see out time frustratingly at the back of the stand. 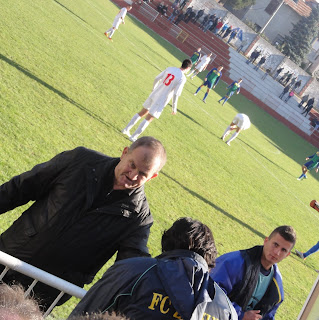 As the whistle was blown for full time the Zemun players made their way to the away section and applauded the efforts of their followers. Clearly the well supported club are under performing at this level and going by this performance it will not be long before they return to the top tier of the Serbian league. 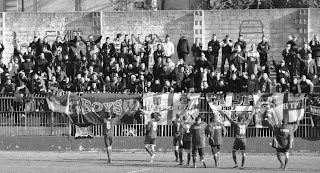 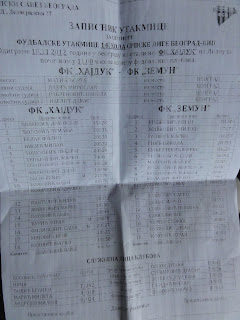 Many thanks to Aleks for his help in providing this report.