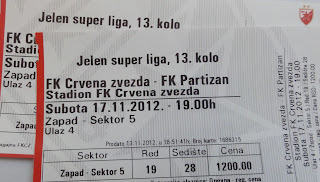 ' Flickering strobes flashed between pools of molten red while fireworks exploded in the clear night sky. Mesmerised by such a vision of spectacular beauty and hidden by a wall of smoke, many of the stadium occupants were unaware that the game had started. ' 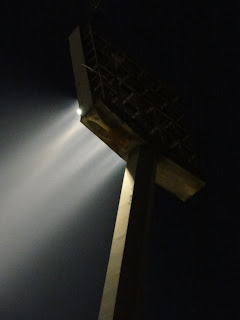 D-Day had arrived and the Belgrade streets before night fall were full of the customary riot police.  Ignored, they stood in small groups at strategic locations across the city, relaxed, smoking and chatting with their colleagues.

The weather this November has been kind with clear skies and moderate temperatures yet as with most Derby nights a storm can always be around the corner.

This was a must win for Red Star with their city rivals holding a strong 8 point lead in the Serbian Super Liga. Red Star manager Aleksander Janković already under threat of the sack knows that a defeat would probably condemn the proud club to another year without being crowned champions. A situation that is unacceptable to the fanatical followers across the country.

Since his appointment current Serbian under 21 manager, Janković has adopted a more direct approach as opposed to his predecessor, Robert Prosinečki's 'pretty' football. This at first produced the results required but in recent weeks the Belgrade club had suffered humiliating defeats against lesser opposition, leaving questions as to the what direction the Balkan giant is heading.

Already nearly 60 million Euros in debt, pressure from the fans and the media has already forced the unpopular president Vladan Lukic to resign. His place is taken temporarily by former Red Star legend Dragan Džajić who has the unenviable task of trying to rescue his beloved club out of a major crisis.

Although the government has promised to do what it can for the stricken state owned club, supporters are not so confident due to the various sporting authorities abysmal record of corruption and complacency.

It is becoming increasingly likely that Red Star are heading for administration and possibly even oblivion. 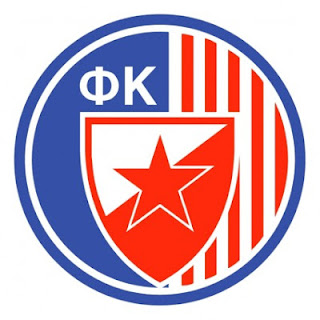 Partizan too have hit serious financial problems bringing home the point what a complete mess Serbian football finds itself. The problems are not only confined to the Belgrade giants, further down the leagues, smaller clubs too are finding it increasingly difficult to make ends meet.

Traditionally lower league clubs have found the future stars of tomorrow, preparing them for the hustle and bustle of the game before selling them on to the top league sides. As teams wobble precariously above the survival line it wont be long before this fragile circle is broken and Serbian football collapses with it. 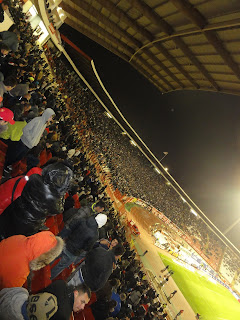 The news that Džajić has been named club president for the second time was met with wide spread approval from the Red Star faithful although like ex manager Prosinečki, he has the impossible task of working with limited resources.

The wise decision to appointment Džajić has at least for now proven a master stroke. Even though Red Star trail Partizan in the Super Liga, an official staggering attendance of nearly 45,000 people have made their way to the Marakana for the derby. Unperturbed by the clubs problems the support for the home side is beyond incredible.

Partizan in contrast arrive in a more solemn mood. Although heading the table a series of fierce internal arguments has divided the ' Grobari ' into two main warring factions. Beside the main mass of Partizan support a smaller section are compressed by the authorities into a secured fenced off section for their own protection. 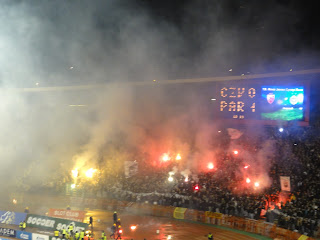 Ever since my birth,
there hasn’t been a day without your name,
not a day, not a year,
Red Star.
Only with you,
will I remain forever,
Red Star.

The build up was the typical posturing and flag waving. The Marakana P.A regurgitated a series of the usual same foot stomping songs in differing versions which under normal circumstances would of been seen as overkill. But tonight's party atmosphere meant that such familiar tunes were lapped up and devoured by the enthusiastic home support. 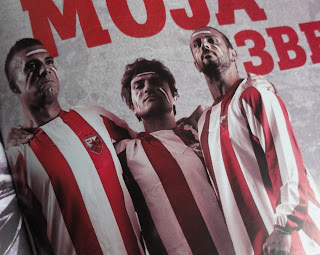 As the kick off approached the North side erupted into a pyrotechnic display of spontaneous combustion. Flickering strobes flashed between pools of molten red while fireworks exploded in the clear night sky. Mesmerised by such a vision of spectacular beauty and hidden by a wall of smoke, many of the stadium occupants were unaware that the game had started. 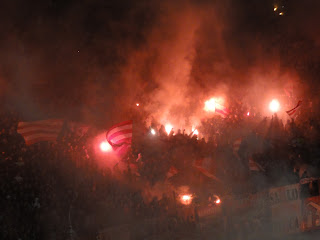 It was Partizan to emerge more dominant from the mist as their teenage sensation Aleksandar Mitrovic fired the visitors into the lead in the ninth minute. The Grobari responded in typical style of unleashing a dazzling display of flares and smoke bombs of their own.

Spurred on by a wall of sound the home side clawed their way back in to the match and just five minutes later a volleyed goal by Filip Kasalica put Red Star on equal terms. Easily the best player for Partizan, Lazar Markovic was causing problems for the Red Star defence and on the sixteenth minute one such forage put the visitors back in the lead.

Bursting forward Markovic crossed a dangerous ball into the oppositions penalty area causing the Red Star defence to panic and put the ball into their own net. 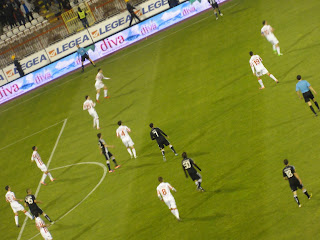 Struggling to contain the pacey and tricky forward, Markovic was unlucky not to put his team 3, 1 up before the half time interval. Easily escaping two markers he shot just wide of the goal.

After the break a toe poke goal by Luka Milivojevic again put Red Star on level terms leaving an exhilarating last 40 minutes. The game was nicely balanced on a knife edge when on the 74th minute former Wolverhampton Wanderers midfielder Nenad Milijas headed Red Star to a much needed victory. 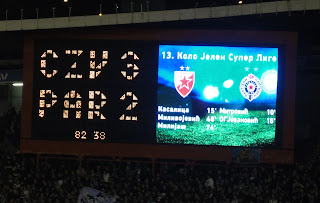 Spawned in a time of war and oppression, Red Star continue to carry the hopes and dreams of thousands.  The very name Red Star was intended to mould and indoctrinate the people into the policies of a totalitarian regime but the club ironically became an outlet of discontentment and criticism towards the authorities.

To many they are more than just a football club, they are symbol of expression, a culture, a voice, even life itself. Such a strong bond will ultimately lead to the survival of this sporting institution in one way or another. Red Star will prevail. 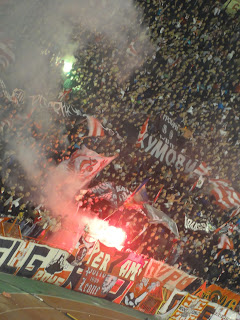 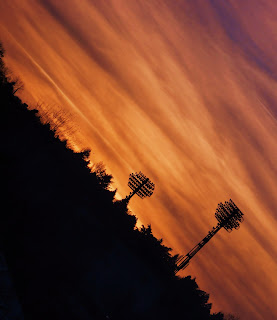