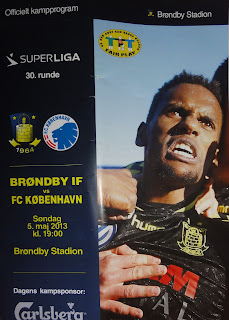 The Danes are deservedly seen throughout the world as the nice guys of Europe. Undeniably friendly, sociable, open minded and even docile. Though the descendants of bloodthirsty marauding pirates they are the sort of guys you could invite to a party and trust them not to burn holes in the carpet or raid the fridge.
But within every Dane there lurks a raging Viking waiting for an opportunity to burst out. Such opportunities are thankfully rare but it seems football is one such excuse to unleash the wild Norseman beneath. 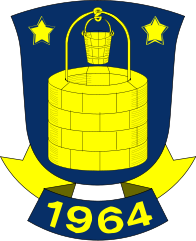 Today is derby day. Debris from Saturday night lies scattered around the back street bars and clubs as the sun slowly rises above the spires and tiled rooftops of the capital. Spring in Copenhagen is a time when the locals begin to appear after their six month winter hibernation. Tables and chairs are gladly brought outside to the front of cafes and bars and inhabited by frustrated smokers eager to indulge in kinder weather that is a little more comfortable. 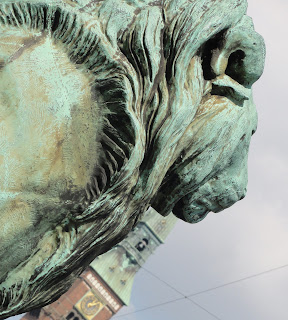 At the back of the main train station young tourists return to their beds after a heavy night on the tiles while local drunks and prostitutes gather in small groups for a friendly chat. Copenhagen is a constant hive of activity conducted in a never ending leisurely pace.

Bicycles parade constantly in their lanes chastising those pedestrians that dare to enter their territory and then cheekily proceed to invade the pavements and roads. Unknowing outsiders step into the cycle zones at their own peril but usually a mouthful of abuse is enough to warn them back to the safety of the pavement. 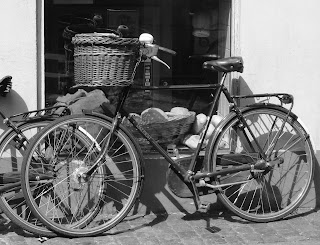 Strøget is one of the worlds longest shopping streets although it's stunning architecture and side roads will appeal to all and not just the hardcore shopoholics. Between the countless shawarma and pizza outlets budding amateur photographers snap away at the magnificent churches and medieval buildings that line the way.

Beyond lies the picturesque and beautiful canal of Nyhavn, a magnet to both tourists and locals alike seeking refuge from the hustle and bustle of the city. The outside bars are now thankfully packed after six months of freezing weather and near perpetual darkness. An occasional soccer shirt or verbal outburst is the only evidence that the derby is about to commence.

The Brondby stadium lies quite a way out of town and requires both a train ride and short bus journey. The fans seem to travel in small groups sporadically rather than on mass an hour before the match. The bus stop outside Glostrup station is not exactly proof that Denmark's biggest derby is only an hour and a half away. Less than twenty people in Brondby shirts wait patiently for the Sunday service bus to the ground.

Eventually it comes and plods on to the outskirts of the stadium. The police have made extra efforts to keep the two sets of fans apart and a strict policy of segregation is enforced from the start. Around the back of the ground there is a mini carnival atmosphere as the home fans make use of the sun and gather on mass in a large park area. Beers are consumed rapidly and the enticing smell of barbecues fills the air.

Processions of younger fans happily cut through the park with an array of rolled up banners and one or two flares let off prematurely in all the excitement. 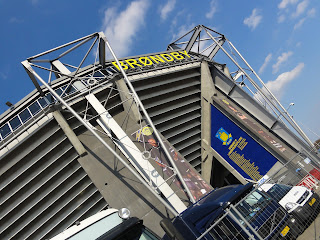 Brondby in their short history and since the mid sixties have made rapid strides from an amateur club in the lower Danish leagues to being Denmarks biggest supported club. Reflecting this has been the stadium which was originally nothing but a simple football pitch surrounded by an athletics track. Their rise especially during the 80s and 90s has seen a series of structural improvements and now Brondby IF boasts a superb, modern 29,000 capacity stadium. This includes a terrace section behind each goal that vastly improves the atmosphere of the match day. 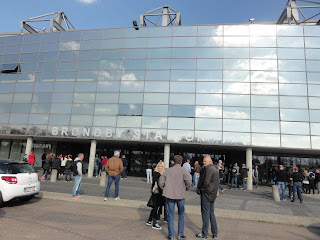 However the club due to some boardroom mismanagement and corruption have had to endure a period of crisis and reorganisation over the past decade. This has been reflected in their poor league position after being forced to sell a number of important key players to keep the bailiffs away. It still looks ominous whether Brondby can sustain their Super Liga status and todays game is seen as an essential opportunity to turn around a series of disastrous results over the past season.

Even an hour before kick off the Brondby supporters behind the goal in the bottom tier are in full voice and waving a series of impressive banners easily embarrassing the small contingent of FC Copenhagen fans in attendance but their numbers too were gradually swelling. 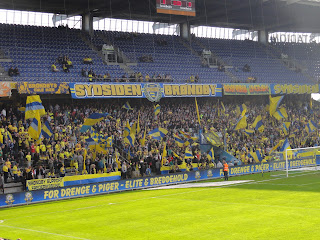 As kick off approached the show began slightly spoiled by the music entertainment. The Danes with such world renowned popsters as Whigfield and Aqua are not really known for their musical prowess decided to blast out home renditions of whisky in a jar and other assorted gems. Thankfully what was to follow would out shadow the awful sounds as the Brondby fans unleashed a visual spectacular before the start of the match. 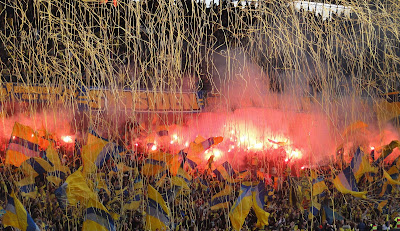 The expected flare display was followed by an explosion of yellow streaks of ribbon that neatly nestled in the surrounding safety netting. FC Copenhagen in response echoed the home visuals with their own dazzling show eager to celebrate being Danish champions. Such amazing support deserved a reaction on the field and with the gauntlet thrown down the players kicked off. 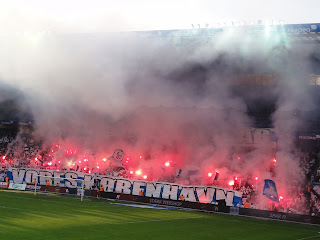 Although both sides were fully committed to the cause each side cancelled the other out. Copenhagen were technically the better side yet Brondby must be given credit for holding out for a goalless draw to a team that were the opposite end of the table. Derbies are always good levellers and this result could instigate a mini revival for IF Brondby. 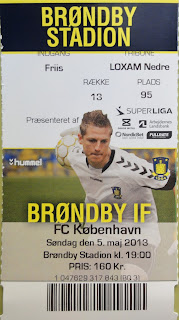 Unfortunately after the game a section of rogue Copenhagen fans broke away from the police escorted away support and attacked a few home fans indiscriminately. Their attempts to cause any further trouble were thankfully foiled by the forces of the law who were quick to crack down on any such misdemeanour's. 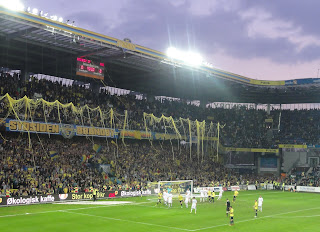 Cost of admission. 160 DK ( £18.60 ) Side stand seating.
Brondby Stadium gets 7 out of 10. Nice spacious ground with the added strength of terracing that generates a better atmosphere. Good facilities, friendly fans and helpful staff.
Programme ( free with admission ) 5 out of 10. Simple publication with basic facts, stats and adverts.
Floodlights. 5 out of 10. The inbuilt modern stadium kind......Boring ! 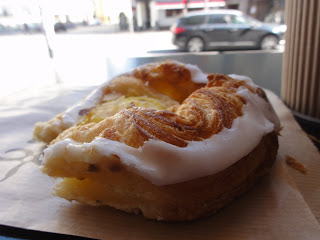 Bad food guide. No visit to Copenhagen would be complete without trying the nations most famous sweet offering the Danish Pastry. Often eaten at breakfast these tasty treats are so good they can be eaten any time. Obviously the home attempts are miles better than the ones sold in high street supermarkets and the iconic cake gets a big fat 8 out of 10. 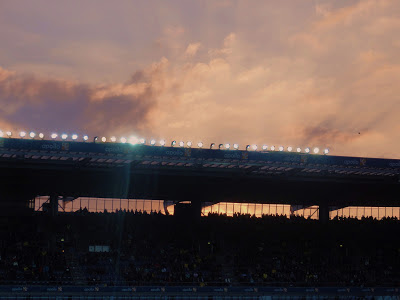 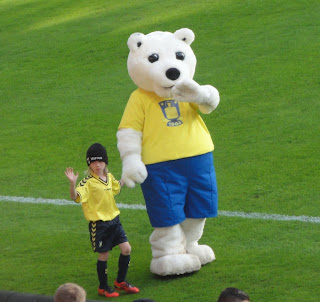