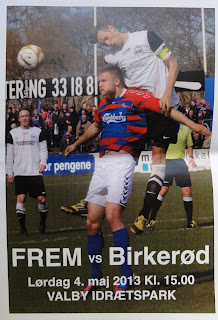 ' For any members of the away support there can be no feeling of being threatened and the Frem ( family friendly ) ultras represent the true meaning of alternative football. '

Wonderful Copenhagen as the song goes and the weekend of the notorious derby between Denmarks two most successful clubs, IF Brondby and FC Copenhagen is approaching. Away from the tourist traps and under the radar, a transformation is slowly occurring or a more apt description would be a resurrection.

Saturday and the day before the derby. In the gritty working class district of Valby, Copenhagen there is no national media circus. Trains pull into the high rise station looking down upon a mixed industrial and residential landscape. Beyond in the distance lies the tall, old distinctive floodlights of Valby Idrætspark, home of Copenhagen's most historic club, BK Frem. 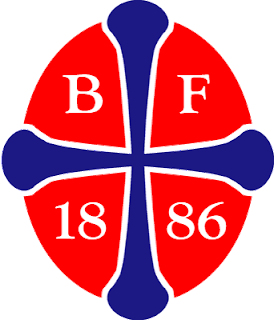 Formed in 1886 as both a cricket and football club it was also a front for the radical political activities of a then anti government Danish Liberal party, a tradition it has carried on to the present day. It's currently connected and sponsored by both a trade union and the centre left Social Democratic party. Up until the 90s Frem were one of Denmark's most successful clubs being virtually ever constant in the highest division and winning a series of championships and domestic cups.

However with the club declared bankrupt both in 1993 and 2010, Frem were relegated to the lower leagues of Danish football. But the signs are there that this once great club is again pushing to regain it's rightful place back in the top tiers. After two near extinctions the process will be slow but with a loyal support that has stuck firmly to its club through thick and thin there is little doubt better times are ahead. 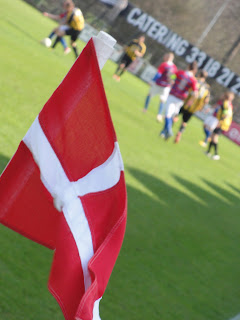 Today Frem have a mid table clash with Skjold Birkerod, another club from the outskirts of Copenhagen. Pockets of fans descend from the station and head for the tell tale floodlights of Valby. There is little to suggest that there is a game apart from the mumbled rock tunes seeping through the noise of the motorway traffic.

The ground lies alongside a large shopping complex and even though it is a while before kick off it is evident that many of the fans have been here early preparing for today's match. Banners are being prepared and unfolded and groups of supporters huddle in small groups around the pitch. Refreshingly young and old, black and white happily chat in the chilled Scandinavian sunshine awaiting the upcoming match. 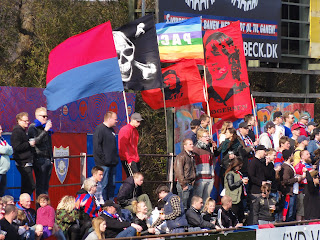 It is obvious Valby Idrætspark has seen better days. A matchday scoreboard lies derelict and neglected behind one of the goals surrounded by ageing advertising and an abandoned rusty barbecue. The stand too although large, looks tired and urgently in need of a lick of paint. Yet these are minor concerns and doesn't detract from the fact BK Frem are a club with huge soul evident by the love and passion afforded it by the fans. 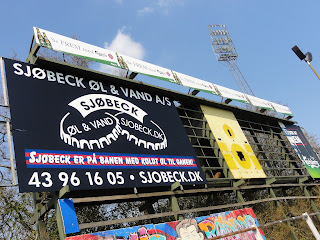 From the moment you enter the ground there is feeling of togetherness, that for all its recent ups and downs this club truly represents the community. It's historical political connections are continued with the unfolding of Che Guevera and pirate flags and an abundance of anti establishment tee shirts are on show. Comparisons can be drawn to the German ' Kult ' club St Pauli and indeed their ultra stickers are proudly promoted around the stadium.

Like Malmo the Danes are making the most in the change in weather and a garden party atmosphere vibe is evident with barbecued meat and beers being purchased in abundance.
A main group of Ultras gather behind the goal while a smaller older crowd with chidren go into the main stand equipped with drums and an enormous red and blue Frem flag draped over a large section of seating. 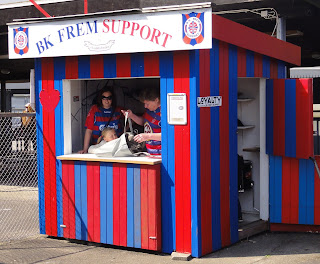 Later some very young drummer apprentices took to the back of the stand and attempted dismally to impersonate their respected elders below. Encouraged throughout the match they were occasionally applauded ( with a few sniggers ) but it is clearly obvious that some more lessons are urgently in need. 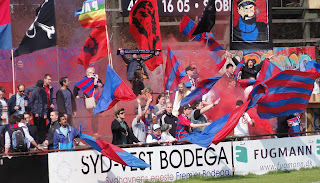 Keeping the younger fans happy ( or terrified ! ) is the BK Frem elephant mascot who must go down as one of games worst attempts at pre match entertainment costumes ever. Yet his interactions with both the kids and adults is appreciated and it is obvious the elephant-man monstrosity is fondly thought of by the home support. 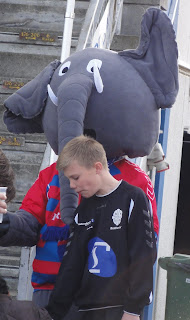 Strangely but common sight amongst the fans are a number of England shirts and tops signifying the Danes ( and Scandinavians ) fascination with both English football and culture. Point proven when the P.A blasts out New Order's 1990 World Cup anthem ' World in motion ' something that may have seemed strange or out of place in another country but perfectly normal here.

With preparations ready the two groups partake in a mini demonstration of their support before the whistle. Rather than the normal intimidating, scarf covered right wing thugs, these ultras are a mixture of families, young, old, girls, boys and fans from the ethnic minorities. For any members of the away support there can be no feeling of being threatened and the Frem ( family friendly ) ultras represent the true meaning of alternative football.

As the two teams enter the pitch an explosion of red and blue paper erupts from the stand followed by the appropriate coloured smoke. The drums begin to bang the fans chant and the flags wave. 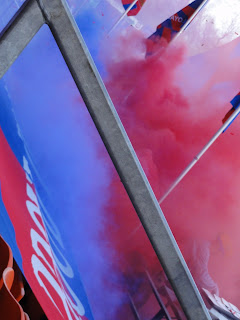 The support continues throughout the match and the Frem players react to it accordingly. Even when on the back foot in the early stages of the game there is always a maximum effort on behalf of the home team to prevent Birkerod from taking the advantage. Driven by the noise gradually Frem settle and begin to make some effective sustained attacks of their own. Going a goal up through midfielder Jeppe Østenkær sends the crowd into a frenzy and predictively more coloured smoke bombs. 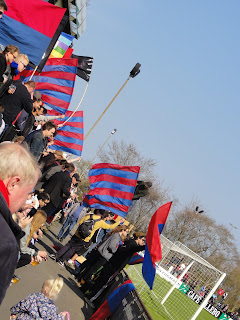 At half time children run onto the pitch and play a game of football in the goal, something unheard of elsewhere. Whether the groundsman was aware is another matter or possibly he had been locked in the toilet by over burdened and stressed out parents.

The second half Birkerod pushed further up field to increase the pressure upon the organised Frem defence. But with little or no bite the home side again took matters into their own hands and scored again through Jeppe Østenkær.  From this point there was a lack of any determined attack form the Birkerod and the hosts were able to cruise through the rest of the game with ease. 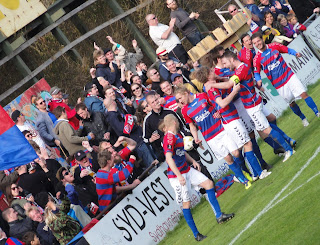 Østenkær grabbed his hat trick on the 82nd minute strangely causing the away team to come to life and grab themselves a consolation goal six minutes later. The result does nothing for the home team apart from restoring a bit of pride towards the end of the season. It stands BK Frem in good stead for an improved campaign the following season and a possible promotion push to the Danish First Division.

After a decade of near disaster and financial ruin that is little or no consequence to the supporters who are just contented to have a club that represents them. 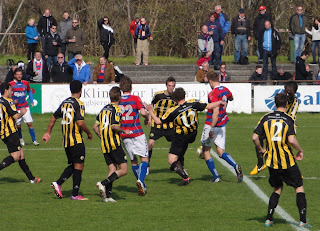 Cost of Admission. DK 60 ( £6.82 )
Valby Idrætspark gets 8 out of 10. In obvious need of repair but proof that its the supporters that make the ground and not always the infrastructure.
Programme. ( free with admisssion ) Simple 4 page publication with basic team facts, table and ads. 5 out of 10.
Floodlights. 8 out of 10. Although a bit tired looking it gives the ground a characteristically retro and distinct touch. 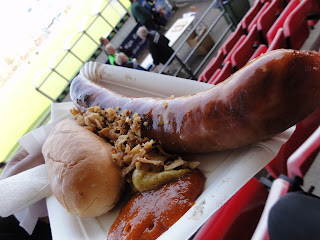 Bad food guide. Frem hot dog gets a deserved  8 out of 10. Typical spicy meat feast served with dried onions, small roll and hot mustard.There must be a way of mastering a technique of managing to eat such a monster off a paper plate. Mine always seems to fold over with contents into my lap. 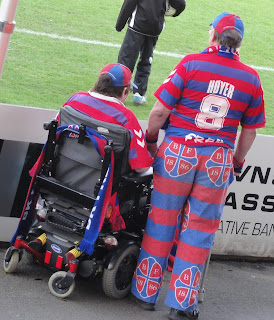