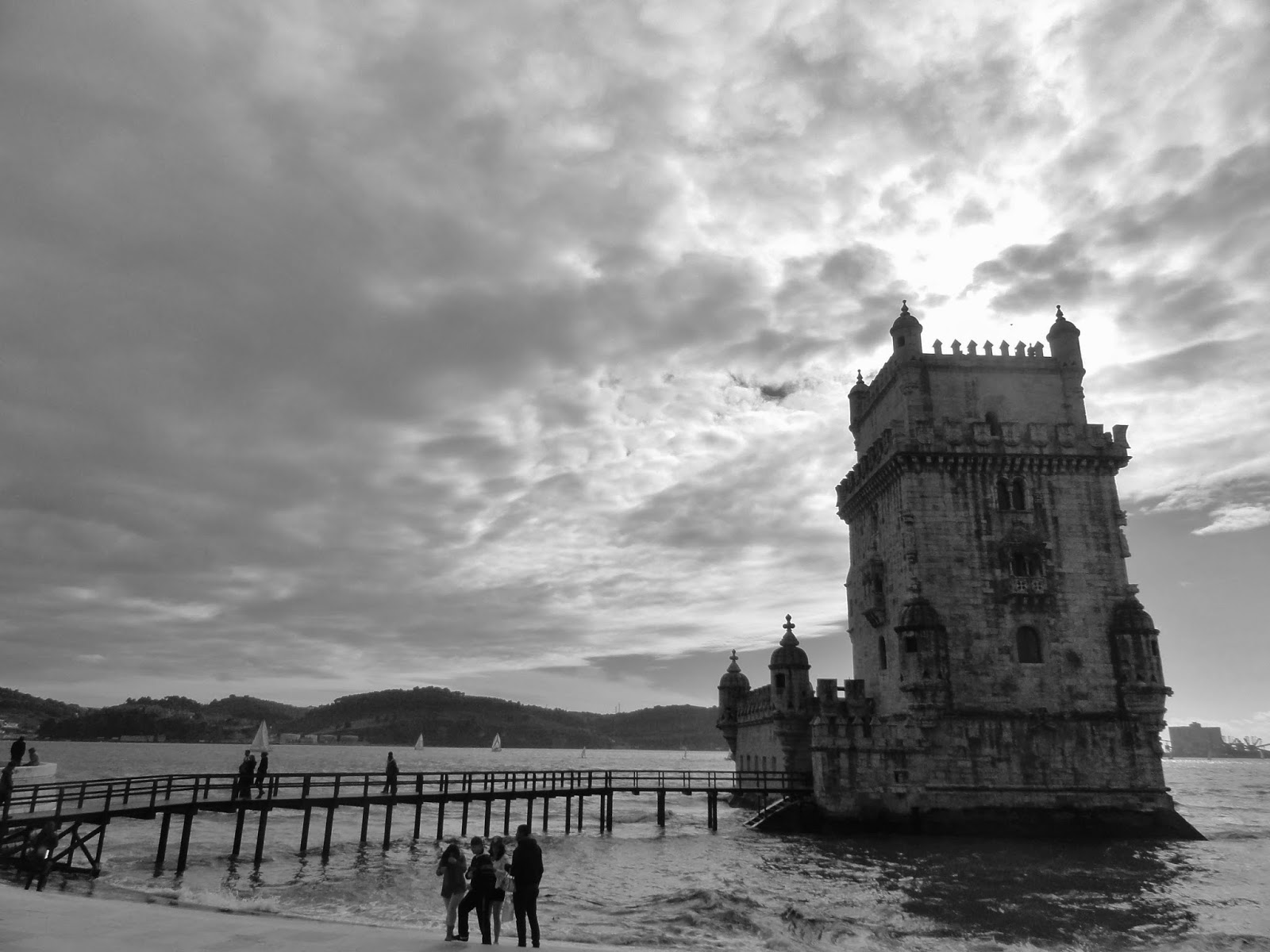 THE MOST BEAUTIFUL GROUND IN THE WORLD ?

'' With such an array of important landmarks, being lucky enough to catch a sunset as a match is being played can be an exhilarating and breathtaking experience. It is no surprise that the perfectly positioned 25,000 capacity stadium will host the 2013/14 women's Champions League, European Cup Final. ''

Where is the most beautiful ground in the world ? A difficult question to answer when it's simply down to one's preferences and views. A snow covered pitch beneath a breath taking alpine backdrop or a huge modern stadium assimilated into a dazzling urban sprawl ? Some would favour a mud splattered field with mainly cows and sheep as spectators while others would drool at the prospect of being at an antiquated crumbling ruin.

Estadio do Restelo, home of Belenenses is none of the above but what it does have sets it apart from most other football grounds in the world. 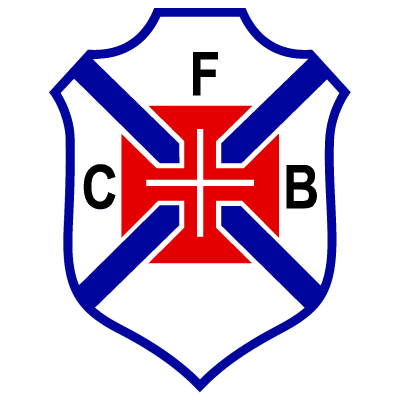 Nestled perfectly just behind Belem's Jeronimos Monastery, it occupies one of the most historically rich sites in Europe, if not the world. It is this area that spawned Portugal's nautical supremacy at naval exploration in the sixteenth century. Buried within the monastery is the brilliant navigator,Vasco da Gama, who's epic voyages to India began a wondrous age of discovery, exploration and European expansion into the New World. 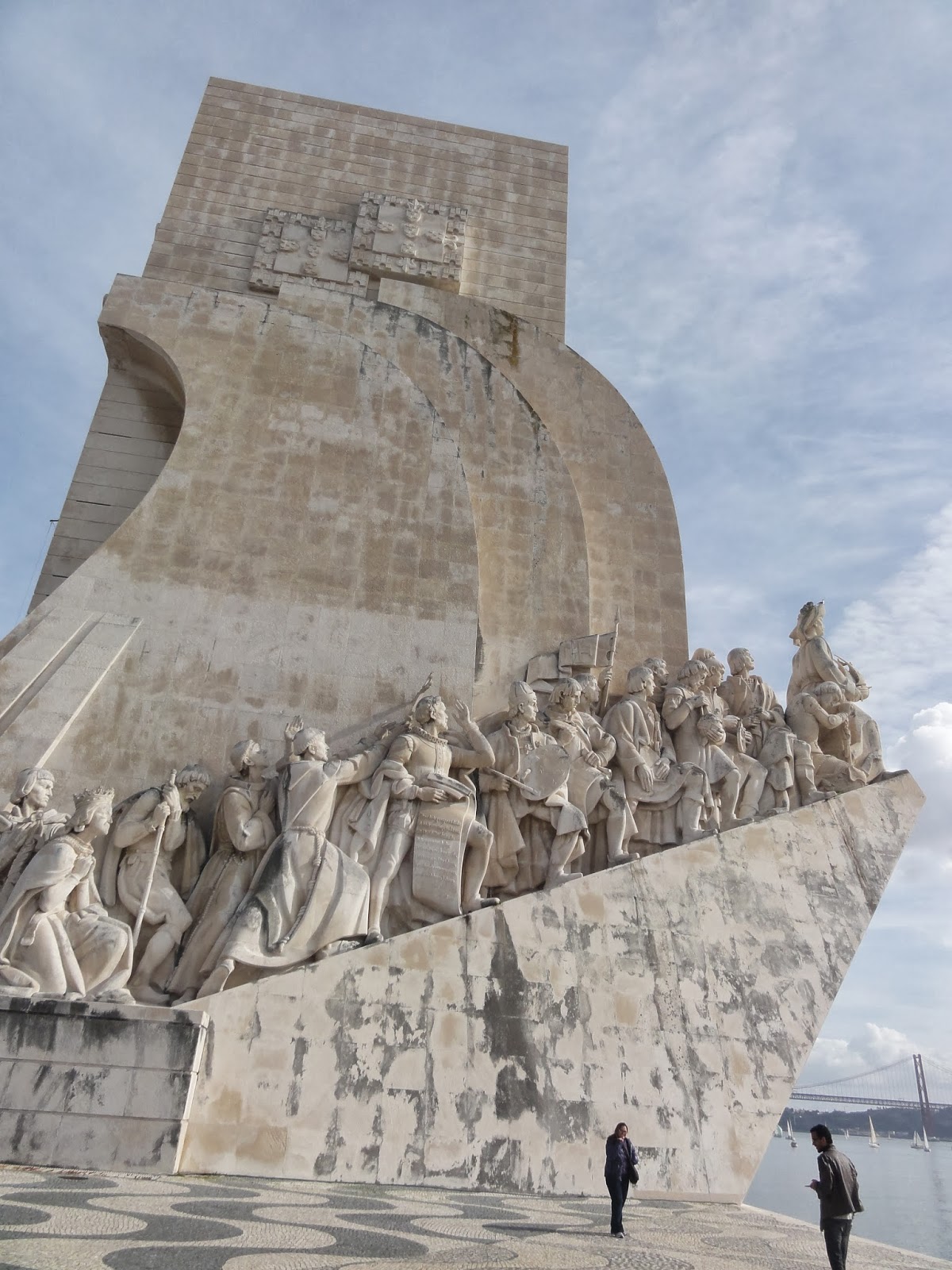 From certain high areas of the stadium looking down towards the Tagus River one can see both the iconic Belem Tower and the more recent Monument to the Discoveries. A little further west lies the Golden Gate like Ponte 25 de Abril suspension bridge and just beyond that the Cristo Rei statue. The giant stone Christ looks down disapprovingly upon the city of Lisbon and is known as the great policeman by disgruntled drivers caught in heavy traffic on the bridge. 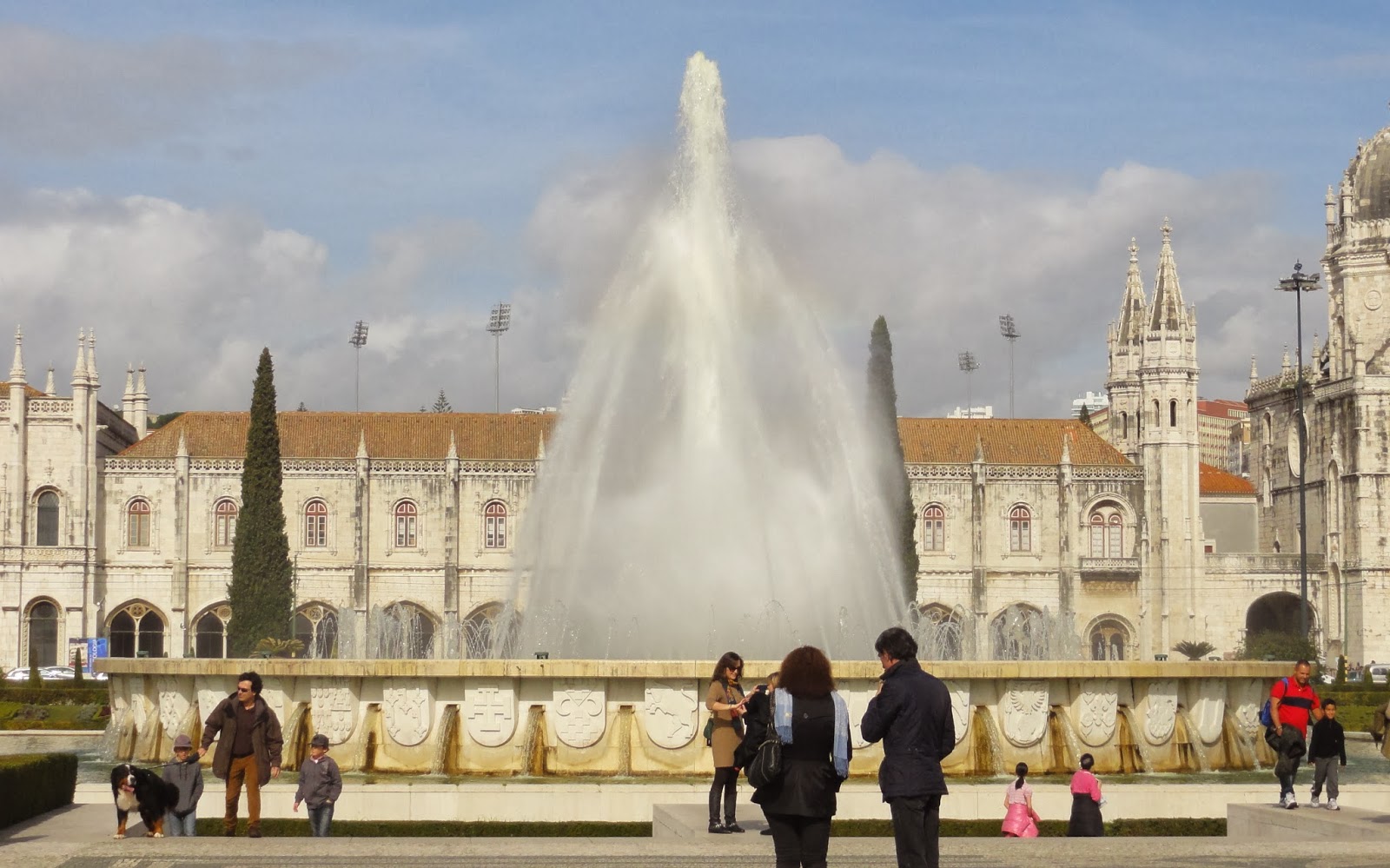 With such an array of important landmarks, being lucky enough to catch a sunset as a match is being played can be an exhilarating and breathtaking experience. It is no surprise that the perfectly positioned 25,000 capacity stadium will host the 2013/14 women's Champions League Final.

In most other prominent cities, football grounds like lepers are purposely exiled to the far industrial outskirts. Here in Belem unusually the club proudly holds centre stage with it's more illustrious neighbours.

With the grounds floodlights just appearing discreetly over the monastery, the Estadio do Restelo actually manages to blend in perfectly with its surroundings. It is positioned far enough behind the great building as not to spoil it's Gothic splendour and the curved oval stadium is conveniently buried deep into the hillside maintaining a low profile. 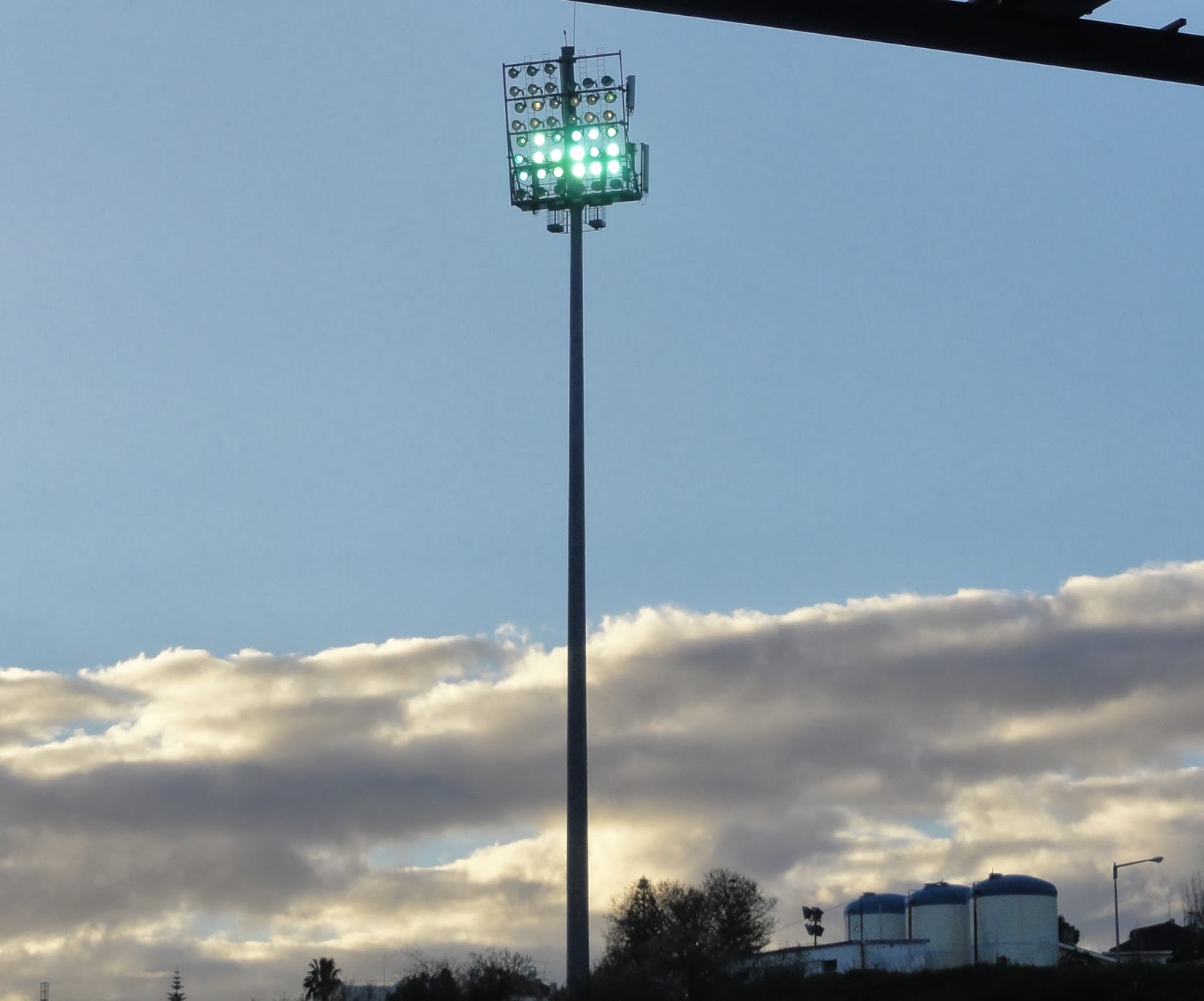 The stadium is however cursed by an athletics track and being in the shadow of Lisbon's two super giants, Benfica and Sporting is equally hindered by shockingly low attendances for a club performing at Portugal's highest level. They were however the first club apart from the ' Big Three ' to win a Portuguese championship in 1945/46 and have played in the top flight for most of their 94 year history.

The club were first relegated from the top divison in the early 80s and in line with Portugal's recent economic turmoil have suffered more relegations in recent years. Having bounced back to the Premeira last season ' The one's from Belem ' have struggled at the lower end of the table and today's match with Sporting Braga is a must win for the home team. 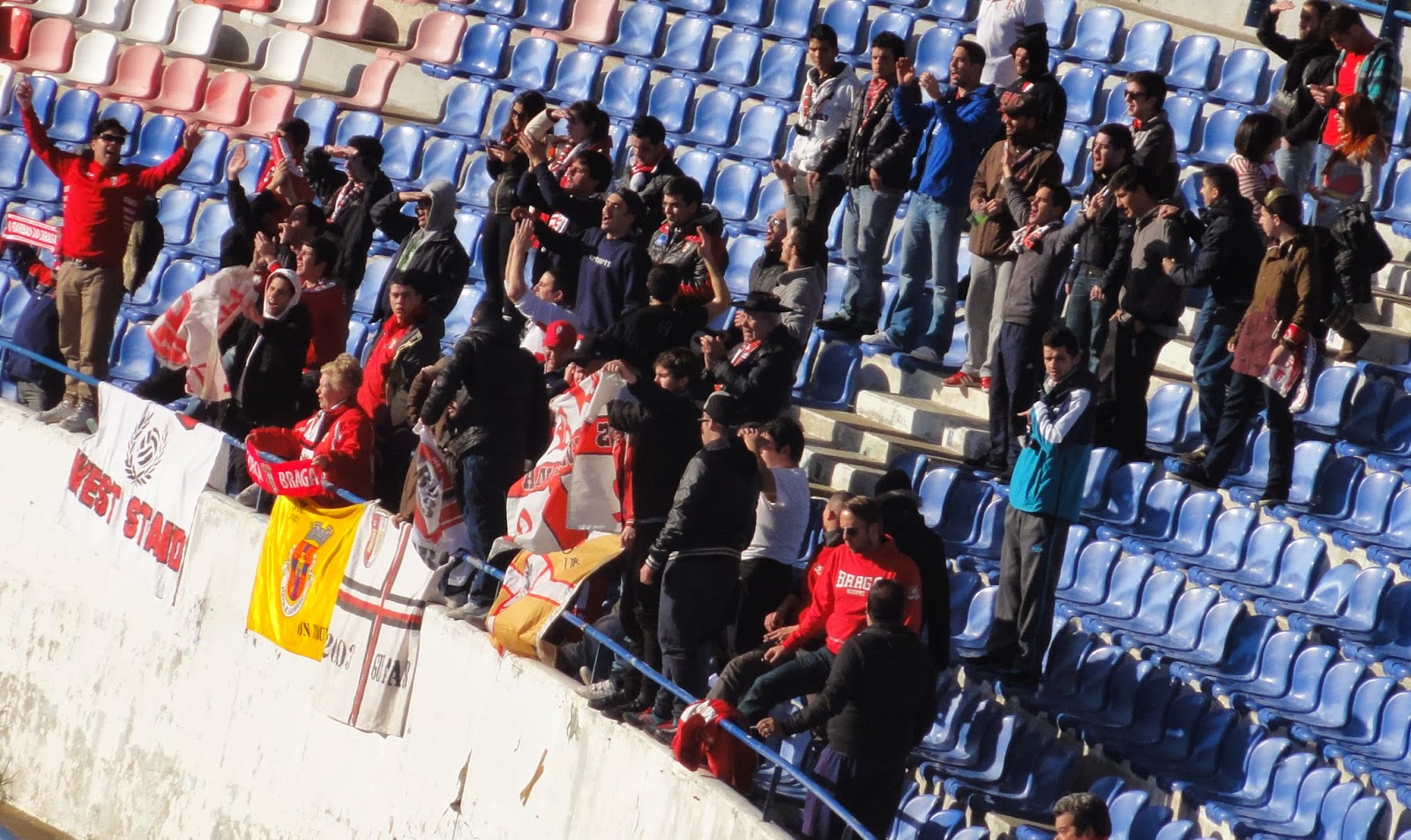 The tiny but vociferous Braga fans arrive by coach and are hastily escorted into the stadium by the local solemn looking police. As in Spanish football away crowds tend to be on the very small side but this contingent are determined to generate as much noise as possible to make up for the numbers. They take their position behind the goal at the far end while the home supporters nestle mainly into the side stands.

The local ultras are like their counterparts small in number but they too manage to create something of an atmosphere in what in reality is a very disappointing attendance. There is a rare, brief moment of togetherness as the Soviet propaganda style club anthem is basted out of the P.A system and the Belem faithful erupt into song. Apart from the ultras they settle back down and chat with friends and family in what is after all a leisurely Sunday afternoon. 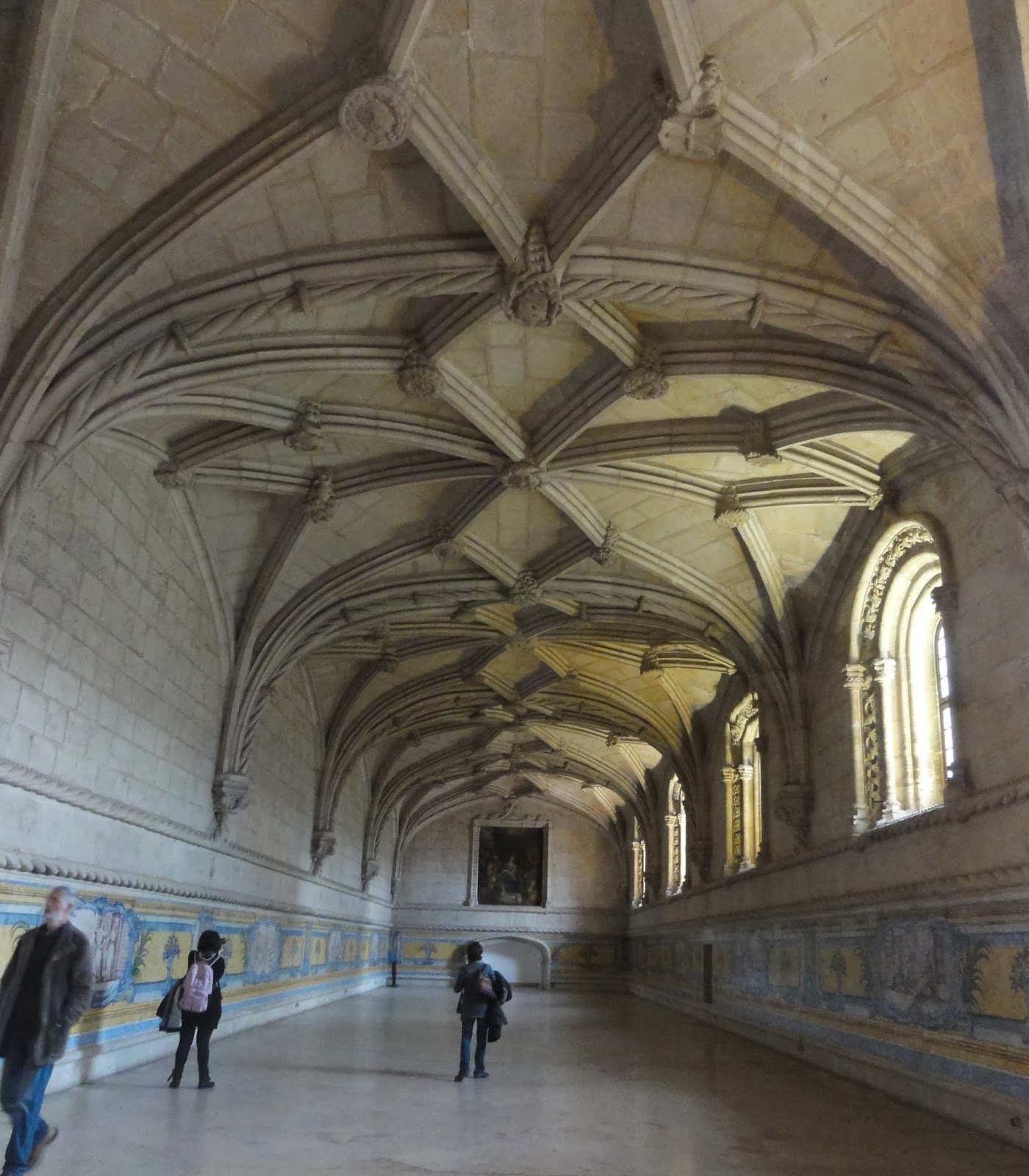 If there was ever a game of two halves, this was it. Unbelievably the first 45 minutes resembled nothing but a training session with both sides content to aimlessly pass the ball without any conviction. For Braga holding a mid table position it was understandable but for Belenenses it was clearly and utterly unacceptable. Yet surprisingly the home fans remained fairly docile considering the very poor display. A few groans of disapproval could be heard above the din of the performing ultras.

As the game progressed Belenenses performance deteriorated and the away side were able to create a few scoring opportunities, even managing to hit the woodwork. Belem's keeper, Englishman Matt Jones had a poor first interval, being regularly caught out of position and clumsily fumbling weak shots. The signs were there that Sporting Braga were about to step up for the second half and return back north victorious with all three points. 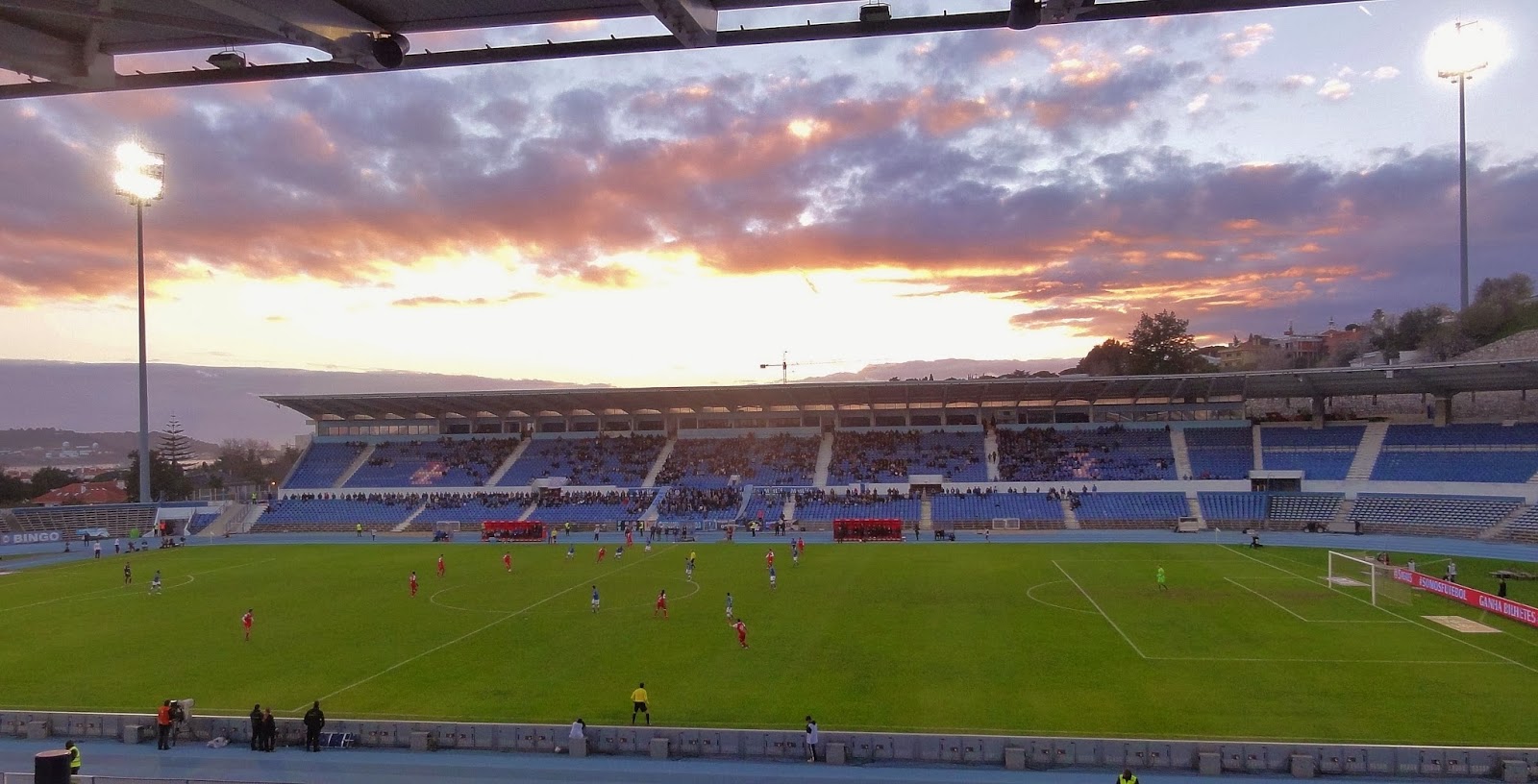 The transformation to Belenenses in the second period was almost miraculous in comparison to their dismal first half display. Passing with purpose and precision and even attacking with determination and a cutting edge, the ' The Blues ' were now obviously up for the fight.

It took the somewhat passive support by surprise and nudged them into a few feeble murmurings and chants of appreciation. The host team responded in kind with a thunderous long range shot by Miguel Rosa that almost tore out the net from the goal frame. The goal advantage gave Belenenses further confidence and they stepped up again to go two up with another world class effort by Filipe Ferreira. Seeing the Braga keeper off a fair distance off his line he cunningly chipped the ball over the embarrassed goalie almost from the half way mark. 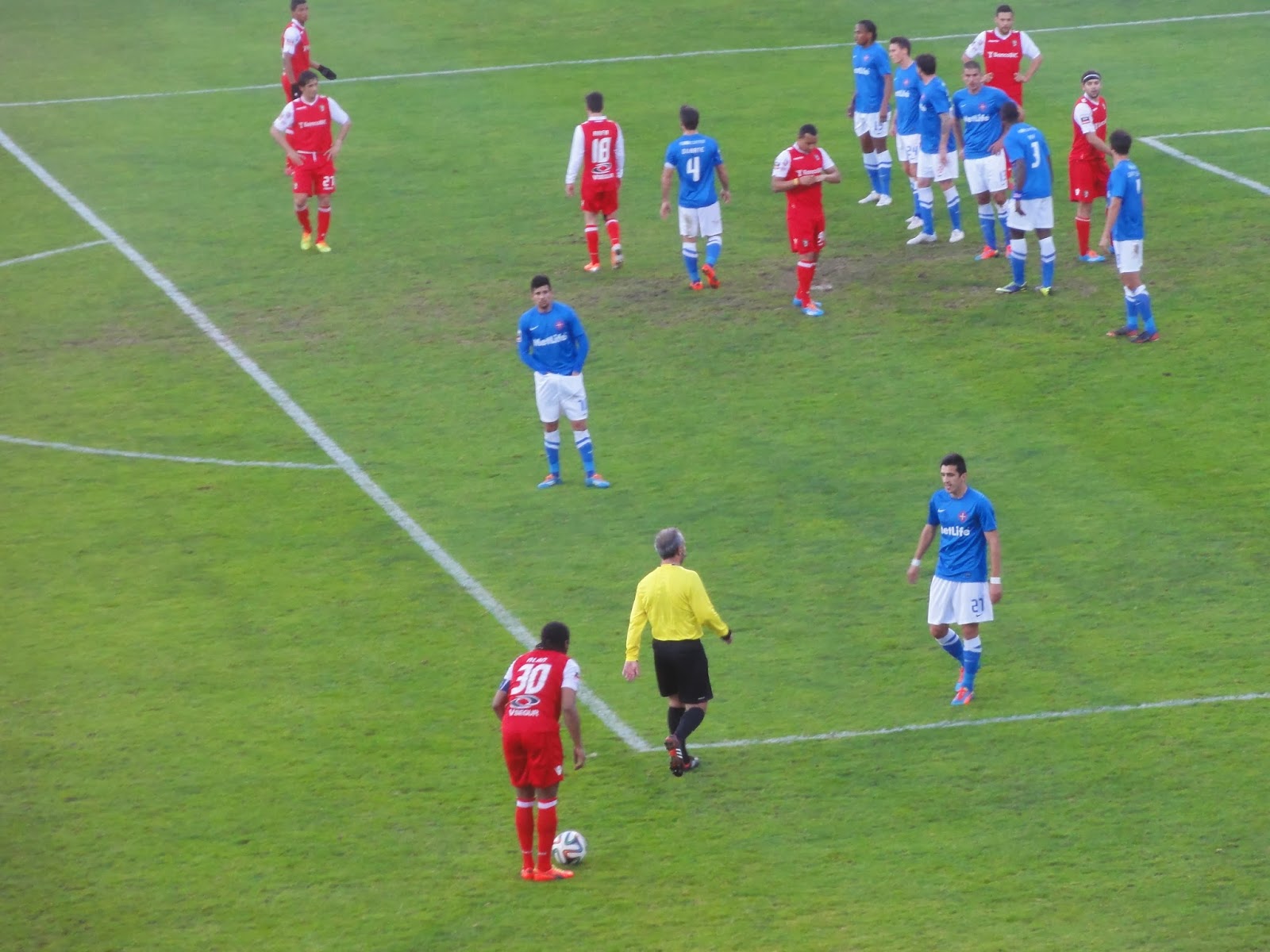 To their credit Braga having nothing much to lose but pride remained disciplined and began to edge their way back slowly into the match. With over 20 minutes left to play, veteran midfielder ' Alan ' deservedly scored for the away side and ensured the match was going to a nail-biting finale for both sets of fans.

Rather than defend their slender lead, Belenenses bravely attempted to go forward and score again. Braga when in possession charged into the oppositions half trying desperately to salvage something from the game.
However the match ended up with no further goals much to the relief of home crowd who it seemed were not used to such nerve wrecking games. 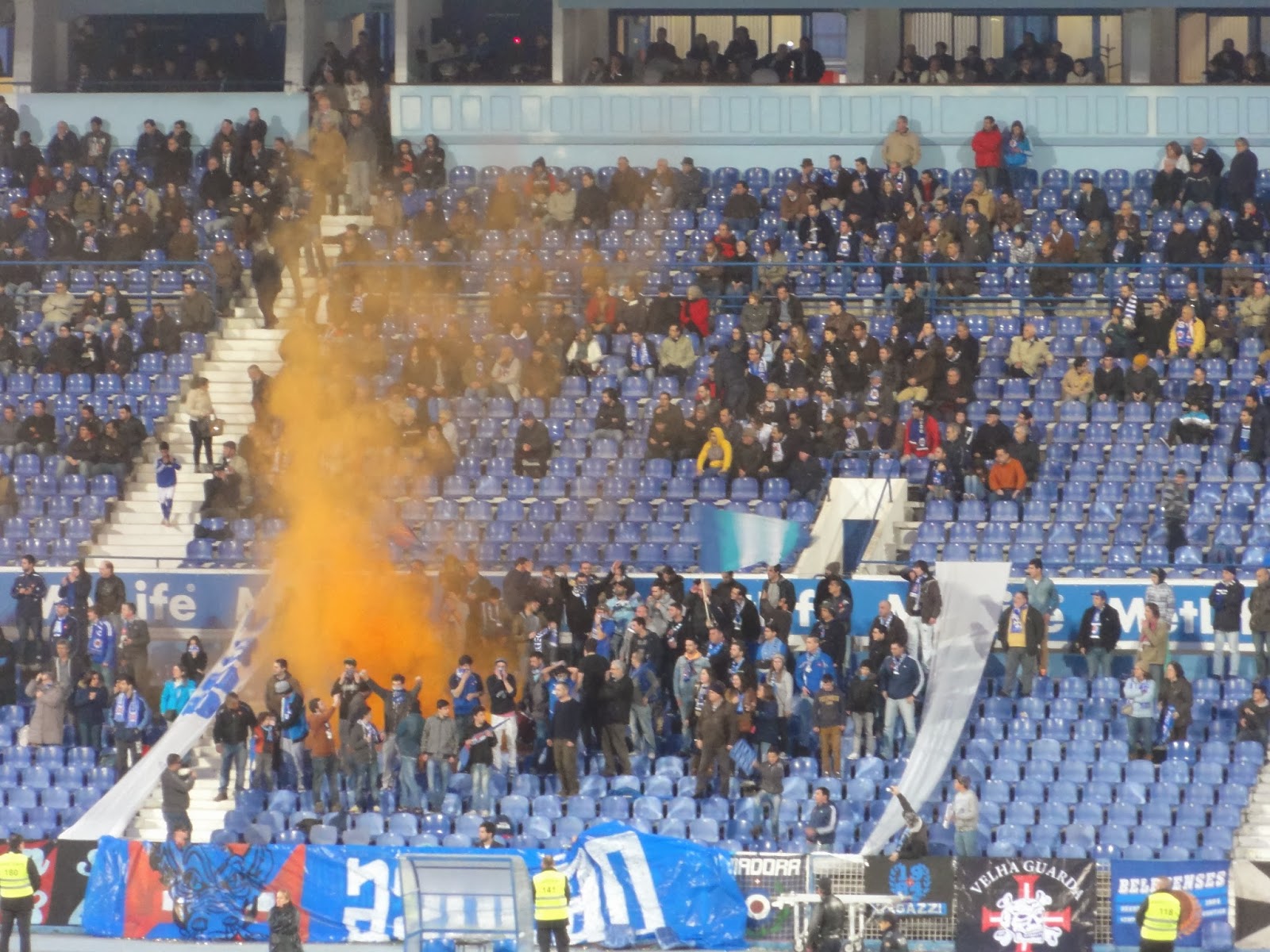 Cost of admission : 20 Euro ( side stand )
The Estadio do Restelo is rewarded with a well deserved 8 out of 10. Comfortable and spacious with a breath taking view of Belem and it's treasures. Lacks a decent atmosphere ( not the fault of the ground ) and has little in terms of half time snacks or amenities.
No programme as is the norm on the continent.
Floodlights: A classic set of traditional illuminations on pylons. 7 out of 10

How can one go to Belem and not try one it's world famous egg custard tarts ( pastéis de nata ). The original and simply the best !
Although sold all over the city it is worth to queue at the famous bakery where the gooey masterpieces were first created. Just a 10 minute walk down the road from the ground at the bakery next to the Jeronimos Monastery. Sprinkle with cinnamon and down with a coffee for a near divine experience. 10 out of 10 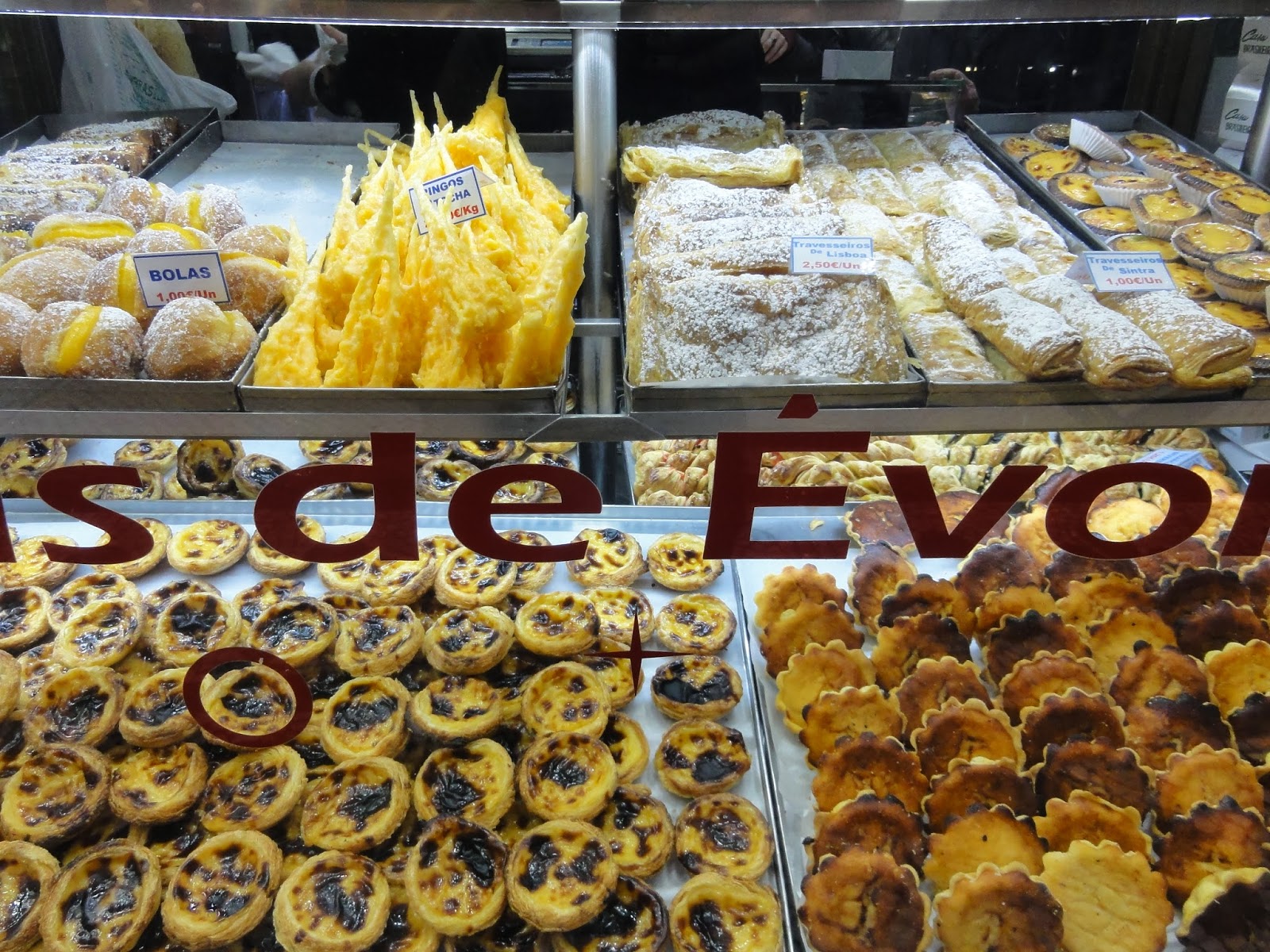