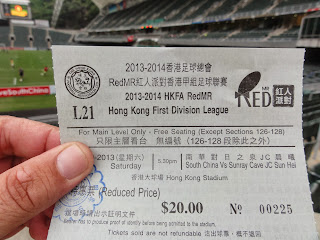 ' Usually such tactics are supposed to stir up an atmosphere of intimidation but considering the perpetrators are more like members of a Doctor Who fan club convention, the intended effect somewhat backfires '

ENTER THE DRAGON ?    A continuation of HONG KONG FOOTBALL ( Part One )

The Hong Kongers love their sport and nothing epitomises this more than Wednesday nights at Happy Valley race course. Some view that the word sport in this case can be quite misleading. The proud locals would in likelihood probably disagree but an absolute passion ( or obsession ? ) for gambling would be to many an outsider a little more accurate.

Chain smoking old men, faces either contorted with rage or smiling like Cheshire cats anxiously wait for the next race. Armed with rolled up racing newspapers they both curse or celebrate their fortunes in the previous race. Mixed in between them are overly excited family members, young couples and small groups of dazzled tourists. Most are transfixed on the events before them, others are simply paralysed by the breath taking urban backdrop that surrounds this iconic venue. 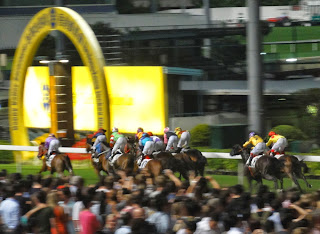 As the horses are paraded around the paddock, many self appointed betting experts sink their heads sternly into newspapers, studying the latest stats and current form. Agonisingly the crescendo slowly builds until the horses are led to the starting gates and finally the sound of the bell to begin the race. It comes as a major relief to the thousands around the track but also a pre warning that higher levels of extreme emotion and tension are again only moments away.

To simply dismiss this as an act of leisure or enjoying a night out at the races would be a gross injustice to Hong Kongs most famous sporting occasion. Taking the ' sport of kings ' from what was their temporary colonial overlords, the Chinese have adapted and taken horse racing to a new level of dizzy heights. Few words can describe such an electric atmosphere but euphoric seems to be the most apt description. 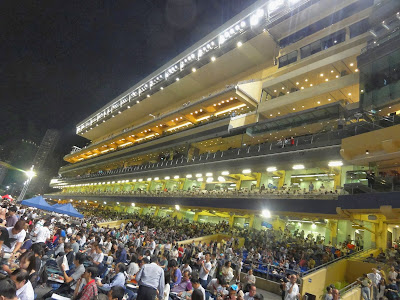 A similar scene is repeated a few days later. Just a stones throw away from Happy valley, a neon drenched betting shop unofficially advertises the equally glam and glitzy English Premiership on a TV. Men stand tightly huddled together scrutinising virtually every kick, tackle and decision with both screams of delight and disapproval.

Like heated pop corn, lone smokers hop out of the shop then after some desperate puffs return eagerly back to the mass. The scene attracts passers by and it's not long before the crowd within extends to the entrance.

Wearing a wide range of football shirts, the more organised have obviously planned ahead and aggressively defend their front row positions. Late comers either jump repeatedly behind an impenetrable human wall or wave the white flag and attempt to locate another bar or betting shop. A lone staff attendant is the only person disinterested in the gathering and she sarcastically thanks leavers for their valued custom as they leave the establishment. 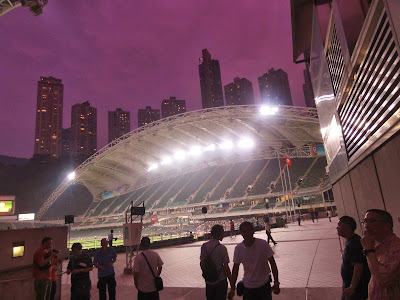 What is strange is while this is occurring, Hong Kong's most popular club South China AA are playing a top level match around the corner. In a modern 40,000 seated stadium, there are little more than a thousand spectators within. Like the race course the stadium has an amazing urban back drop that wouldn't be out of place in a Judge Dredd graphic novel. 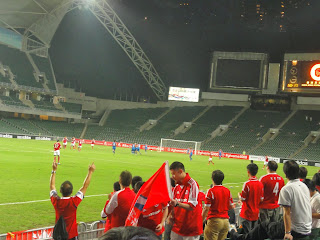 Those that attend do their utmost to create some resemblance of a typical football match. A small group of young spectacled wearing ultras sing in broken English familiar football chants. Any mistake by the opposition is met with a chorus of  ' What the f***** Hell was that ' accompanied by the beats of a lone over weight drummer.

Usually such tactics are supposed to stir up an atmosphere of intimidation but considering the perpetrators are more like members of a Doctor Who fan club convention, the intended effect somewhat backfires. Still it has to be said that had it not been for them, the impressive National Hong Kong Stadium would of been as quiet as a library. The gathering in-turn thankfully attract small pockets of families and other fans eager to escape the dark barren void elsewhere. 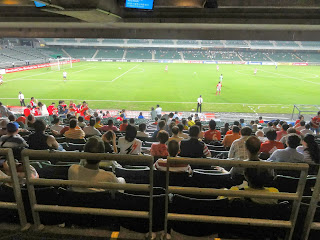 Reasons for the reserved atmosphere are difficult to ascertain. Certainly as a generalisation the islanders are culturally more respectful to the needs and feelings of others. This after all is the place where in the past concert goers to a stadium rock gig were each handed cotton gloves to dampen their applause !
Currently a sinister dog poisoner is still on the loose after what the authorities speculate is an attempt to stop the noisy mutts and their owners walking in quiet residential areas. 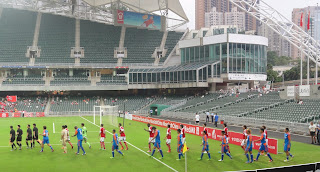 From the start there is no match build up in the traditional sense with only the usual mundane pop music accompaniment on the P.A system. Fans simply turn up, purchase a ticket and find their seats.
Mirroring the snobbishness of the established Colonial clubs, South China in the past had adopted a policy of only playing local Chinese players. Keeping with the sign of times they now sensibly play a mixture of locals, mainlanders and the usual Brazilian and Eastern European mercenaries. 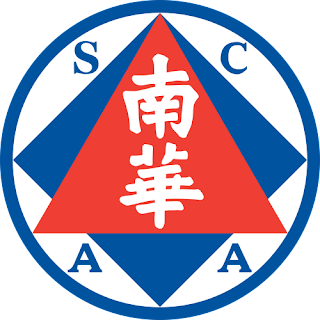 Considering the small crowd the standard of football is superb and proves that the small island has the financial clout to attract gifted overseas players. Sadly for a neutral observer tonight's game must come across as a training session or reserve match. This is what a Queens Park game must be like at Hampden Park.

Yet the spectators enjoy themselves although in a more reserved fashion than the Premiership worshippers in the betting shop. At least here children and the local ultras proudly adorn home shirts rather than the usual Chelsea and Everton one's. A far different experience to the average European football match but that's the attraction of other cultures for there is no definite right or wrong way, simply the choice of the individual. 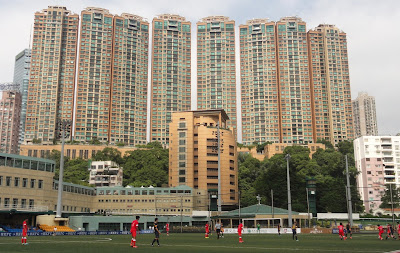 Only a few days before the national under 16s had played Australia in the Asia international cup at the aforementioned Happy Valley race track. With free entry, an early afternoon kick off and the obvious spectacular surroundings it should of attracted more than the few hundred it did. Yet on top of the school parties compulsorily forced to attend and contained Australian ex pats, only a few hardened locals had bothered to make the trip.

The Australians had much to the frustration of the hardcore mini support, bossed the match from start to finish. Even with the emergence of South Korea as a football world power racial supremacists would still point towards physical superiority over the Far East, yet in reality it was difference in sporting ethics. The Chinese players were technically as gifted but lacked the conviction to engage in the usual match theatrics and simulation of the Aussies. 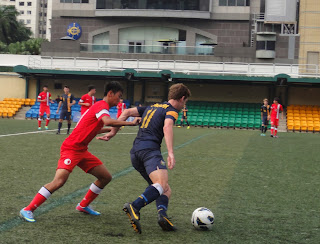 With the influx of foreign players and trainers into the island it will be only a matter of time before young footballers in Hong Kong will reap the benefits. Even with disappointing attendances the interest in football increases and so it seems does the finances to retain a credible presence in the region. Premiership clubs continue to visit Hong Kong in the hope to gain influence and secure lucrative commercial contracts.

It is difficult to say whether the increased resource will filter down to the local football grounds or simply swell the betting shop crowds. But if the Chinese can eventually turn the game into anything like their unique take on horse racing then very exciting times lie ahead. 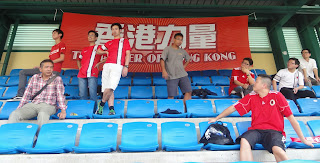 Thankfully the facilities at the Hong Kong Stadium were open to sell a restricted list of basic fast food and drinks. No coffee, tea ( shock, horror ! ) but the usual coke, hot dogs burgers and pot noodles. Not the small tubs commonly sold in the U.K but giant buckets with enough  chicken noodles to feed the most famished of fans. Simply wait for the boiling water to cool down and find a seat(s).
Instant chicken noodles gets an 8 out of 10 for simply being different 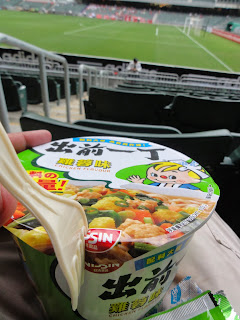