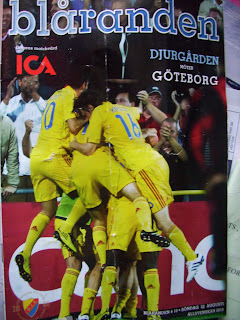 'The first thing I noticed was that the seating had been salvaged from the old Wembley stadium. Had some poor cash strapped Swedish F.A official raided the Wembley skip ? I thought our shrewd F.A entrepreneurs could of made much more cash selling through Ebay to sad geeky football memorabilia collectors ' 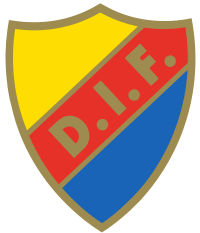 Having only travelled to two other grounds on foreign soil ( Nuremberg and Cardiff ) a recent trip to Stockholm was a good opportunity to claim another away ground even if it did not increase my current 92 tally.

Having confirmed a game was on we mistakenly made our way to the Stockholm Stadion the official home ground of Djurgardens IF only to find the ground was being renovated and DIF had moved temporarily to the National Rasunda stadium ( only a short walk away from where we set out! ).

There seemed a fairly rowdy all most hostile atmosphere and the police presence was very noticeable considering the smallish crowd of 11,000. It seems some of the local supporters mimic some of the idiots from back home in both fashion and chanting although I have to say the Swedes are a lot more friendly and I saw no trouble. There was evidence of past troubles possibly with the presence of nets hung from both ends to stop missiles and other objects being thrown on to the pitch. The ground itself was surprisingly small for a national stadium but suited this first division clash perfectly.

The first thing I noticed was that the seating had been salvaged from the old Wembley stadium. Had some poor cash strapped Swedish F.A official raided the Wembley skip ? I thought our shrewd F.A entrepreneurs could of made much more cash selling through Ebay to sad geeky football memorabilia collectors ( ahem ). 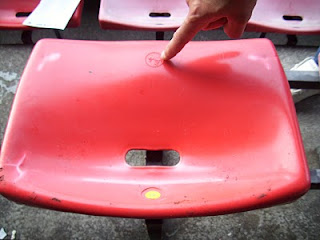 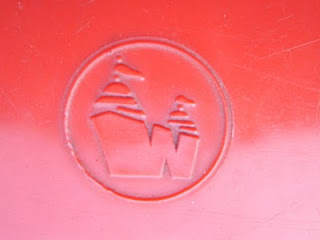 The 36,608 capacity stadium built in 1937 looked worn and dated but again it is a refreshing change to the new and swanky grounds that populate our leagues. That said it could definitely do with a larger capacity bearing in mind that the Swedish national side play here too.

Most of the noise was generated from the large stand behind the goal where we were sitting and there was a good number of family oriented fans to our right in another decent sized stand. To our left was a half full executive stand while the few away supporters were contained in a small area down the other end. As stated before around the entire pitch area I surprisingly saw high fencing a sight not common in English grounds since the Hillsborough disaster in the late 80s. It looked more designed to prevent objects from being thrown onto the pitch rather than a kind of crowd control measure but did give the Rasunda ground an added ugly feature. 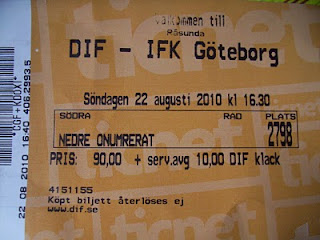 The facilities were pretty good from what I saw although Swedes tend to snack on local hot dogs rather than opting for a much needed curry pie. These hot dogs along with pizzas are sold all over the city and seem a staple fast food diet for the Swedes.

We found a discarded programme which had limited information, few photos and no league table or other stats which fill our own ones. It seems like other clubs abroad that programmes are very much part of  British football culture thing and are not deemed important on the continent when compared to the match day experience as a whole. 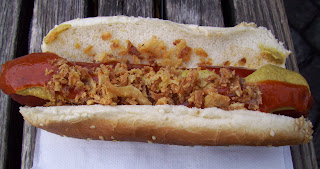 Generally Sweden is an expensive country to live and prices reflect that fact so it would be unfair to say it was not value for money. However even though the standard of football was far better than expected there were no house hold names and most Swedes on the whole tend to follow our own premier league clubs or Barcelona  ( Zlatan Ibrahimovic the Swedish/Bosnian international plays for them ).

The top class Swedish players are usually snapped up by other richer European clubs leaving the Swedish league with players from neighbouring Scandinavian countries, youngsters and ageing ex pats.
A bit of a trek for just a game of football but one to note if you are visiting Sweden for a weekend break or holiday. One advantage is that due to Sweden's cold and dark winters their season goes on well into June and can be a good option when other leagues have finished.

Rasunda gets a respectable 8 out of 10. Good old traditional ground worthy of an upgrade and not demolition.
Admission. Whoops quite simply I forgot ( or is it on the ticket photo ? )

Update 2012. It was sadly announced by the Swedish F.A that Rasunda will be demolished at the end of the year with the national team transferring to a new stadium. 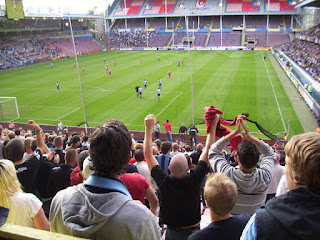