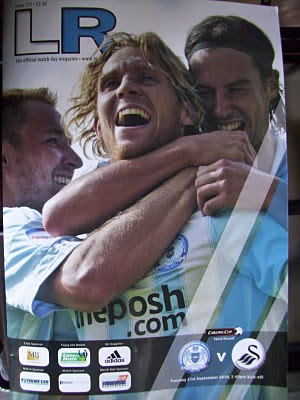 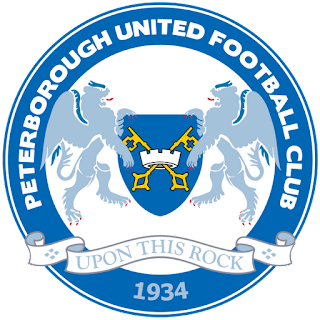 This game will prove to be a change in strategy for me as to maximise the amount of away grounds in a single season I will no longer just focus on Palace away games. Working on Saturdays means I can only go to a few selected matches in the season and having a few days off work I decided to make the journey to Peterborough for this forth round tie in the League cup ( sorry no corporate  naming on this blog ).

It was a good choice as both sides are renowned for good attacking purist football and I was not to be disappointed. I had always wanted to go to Peterborough before and watch the Posh when under manager Barry Fry they deployed a style of exciting, sometimes suicidal cavalier football. His legacy lives on to a degree with this side even if it is the more direct minded ex Bristol City manager Gary Johnson that now dictates the play. I'm sure as chairman Mr Fry keeps a close watch on any new manager to make sure they do not stray away form these commendable attacking football ethics that guarantees to put bums on seats.

Swansea too for a number of years have gained a reputation for playing a more relaxed continental style of play and with a number of Spanish players they continue to do this ( even though there ex manager Martinez has long departed for the Holy Land of the Premiership ). There acquisition of the talented ex Chelsea player Scott Sinclair has proved a bargain and one that I am deeply envious about. He played for Palace on loan a couple of seasons ago and was an instant success but with the club having no money he had to be reluctantly returned to Chelsea 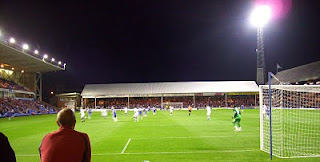 I am still surprised he did not make it at another Premiership club and more so that he has gone to Swansea but no doubt Swansea's manager ex Chelsea youth coach Brendan Rodgers had a part to play. To cut a long story short Sinclair had an absolute blinder and scored a hatrick to really hammer home what a talented player he is and one to watch out for in the coming months. My bet is that if Swansea don't win promotoion he will not be staying in the valleys too much longer if he maintains this level of performance. 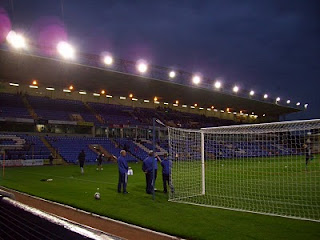 Right back to the ground and Town report. Well to be honest it was a bit of a whirlwind visit having only an hour before kick off and a long mile trek to London Road stadium. I crossed from the train station to what was a huge shopping mall and one that took me 10 minutes to luckily escape from as it was being closed for the evening. Eventually found the town centre and quickly woofed down a hamburger before making my way to the main square. Here I found just enough time to have a coffee and a quick smoke before spotting some young Posh supporters making there way to the ground. I quickly followed in pursuit having a terrible sense of direction and a reputation for either getting lost or being late.

No need to worry as I found London Road in plenty of time and decided to sit with the Swansea fans in the away end ( my Welsh Nan would of been very proud of me ). The extremely thin and threadbare Programmes were £2.50 and I was little miffed that on entry to the ground I was not given a ticket stub which is more of a reflection of how sad and geeky I've become !

The Swansea hordes take over the Moye's Terrace

The ground was an old fashioned type compound with two areas of terracing behind the goals ( fantastic ) and seating to the small stands at the side.Again these type of older grounds seem to generate a far greater level of atmosphere considering there could of only been a few thousand people here. The pitch looked in fantastic shape and the single floodlights at either end of the ground provided more than enough lighting. I of course opted for the nostalgic terrace and costing only £15 it was a real bargain and a trip down memory lane too.

Being this old there is some restriction to viewing the pitch due to the support beams but that is a minor point when you can get the chance to experience watching football the traditional way. It felt strange to have so much room as there were only a few Swansea supporters that had made the long journey from South Wales.The funny thing is after the first half my legs began to get a bit tired and I honestly felt like a sit down which goes to prove that I've been spoiled for far too many years or I'm getting old.

The steward had already informed me there was a small smoking area behind the terracing and it was good to have a cup of tea and a smoke without being hounded or told off. The stewards here were on the whole very friendly and made an effort to talk to people rather than order them about (I was told to turn the flash off my camera but it was a polite request rather than an order).

Sorry no Balti pie report as I was far too bloated from the nasty burger I had in town but normal service will I hope resume in the very near future.

Posted by Unknown at Wednesday, September 22, 2010