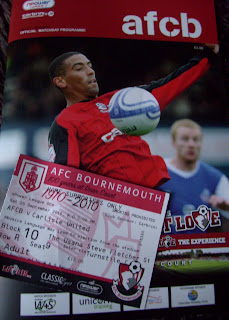 Again while I could of travelled to watch the mighty Palace at Derby ( luckily not as they were stuffed 5-0 ) on the spur of the moment I decided to continue my mission of going to away grounds I have not previously been to.This should enable me to possibly double or treble my usual amount of away grounds even though there is of course personally a lesser interest in the games involved. Ideally I would like to make it 15 to 20 grounds this season but realistically with the cost, weather and time off work 10 new grounds would be satisfactory and a target I'm aiming personally for.With a rail net work card (a third of the price of a rail ticket within the  London and Southern  area) another strategy will be to target certain clubs within that zone. 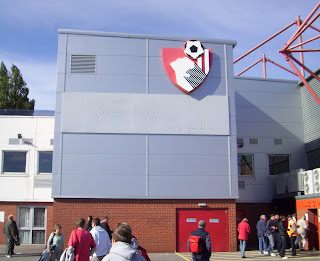 Like Peterborough it was very much a whirlwind visit so no time for a leisurely stroll on the beach with my bucket and spade or a visit to the sea front fish and chip shop. The nearest train station is Pokesdown which is a fair way from the center of Bournemouth and also a good 15 minute walk to the Cherries ground ( if you know where you are going ). I was going completely the wrong way as usual when luckily I was told by another wayward local home supporter ( a self confessed Man U fan and his first visit to the ground ) the right way to Dean Court.
Again there was a no smoking policy in the ground so before entering I decided to have a quick puff and pass the time looking around the surrounding picturesque area.
Dean Court is situated in what is a very pretty rural part of the Hampshire countryside and makes a nice change from the norm of stadiums in the less desirable parts of town. Having a seat at the back of the North Stand ( a fairly reasonable £18 ) you could see the surrounding park but not disappointingly the sea ( I'm such a romantic ). My seat was luckily at the very back but there was little space in front and my knees were constantly banging into the back and head of the very large gentleman in front of me. I was also in close proximity with the fans to my side too and had to endure 90 minutes of flying bits of pie, wayward elbows and pub breath . 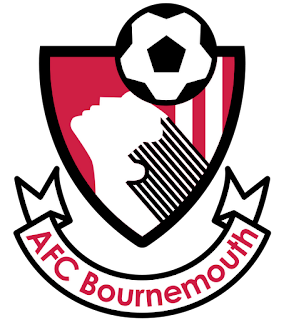 The uncovered South Stand behind the opposite goal was a make shift seating area propped up with scaffolding but the other three stands were all covered modern structures that were all fairly new ( the ground being built in 2001 I believe ) and basic looking. I was seated with the main Cherry faithful ( as stated before a little drunk but not too annoying ) so a lack of atmosphere was not a  problem although it seemed very quiet in the other areas. Many Cumbrians had made the very long 700 hundred mile journey down to the South coast and were in good voice huddled together in part of the East Stand.
At half time there was a general lack of space as fans were tightly penned in the refreshment area beneath the North Stand ( made worse by the officials insistence to stay within the small space and not enter the pitch area ). There were a few screens showing the football results on Sky news but these were hard to view due to the crowd beneath each TV set and my terrible eye sight. 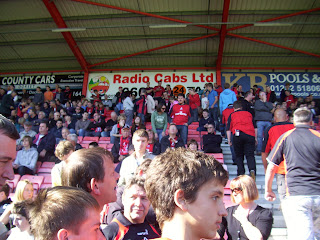 The Cherries programme was priced at the normal £3 and was filled with plenty of photos,news and stats to
satisfy the most geeky of Bournemouth fans although for me it was a good way to pass the time during the half time interval and read some footie material from a different perspective. Both teams are currently vying for a top position in League 1 and up until today Carlisle were unbeaten in the seven games they had played and were laying third in the table. Bournemouth on the other hand had started slowly with two defeats but were now challenging the top positions

The Cumbrians losing their unbeaten cherry ! 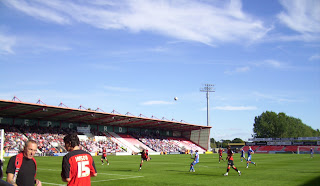 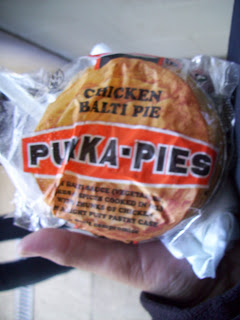 The Chicken Balti pie report has for this game resumed but £3 for a Pukka is a bit steep unless all grounds have put this scanderlous price rise on what is an essential part of 21st century football.
AFC Bournemouth Pie 7 out of 10

Again because of limited time off work and not as of yet having a proper holiday I am now seriously considering the prospect of visiting Palace's hated rivals Brighton for the next game on Tuesday.