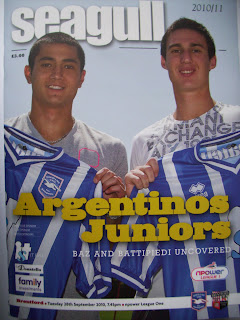 'From Preston Park I foolishly followed some seaweed supporters down a dark eerie walkway by the side of the railway which seemed to go on for miles ( not a good idea when Joy Division are playing on your ipod !). '

Oh well it had to happen and as a Palace fan the hardest ground to attend especially when it means watching purely as a neutral.....well as neutral as one can be.
I will not go too much into the fierce rivalry between the Eagles and the seagulls but just to say that it is a reasonably new derby game (well a 50 mile one) by football standards and one that goes back to the late 70s/early 80s when these two teams met each other frequently in games that always tended to boil over on and off the pitch.The North London, Mersey side and Manchester derbies are nothing when you witness the intense hatred of a Brighton and Palace game.
It's strange that the few Brighton supporters I've met have all been very nice people and not the horrible alien monsters we were told about from older Palace fans (they even have Mum's and children). I in no way would ever want to see anyone harmed in any way over what is simply a game of football and hope this is always the case at all sports events. My dislike ( If that word really applies ) only extends to the club and not any of the supporters or players although this can never be admitted on a face to face meeting. On the whole I believe there is reluctantly a secret ,deep mutual respect for each other and I for one hope they achieve promotion so battle can once again commence.

The Gothic monstrosity that is The Withdean 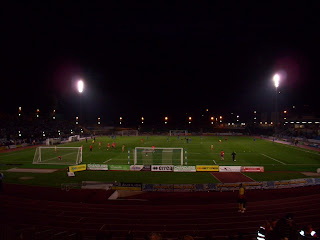 But back to this game and not dwell too much in the past.There is not much to write about the make shift Withdean stadium as it's primarily an athletics ground converted for the exiled club before they move into there plush new 22,000 capacity Falmer ground currently being constructed. Yes I for one have to say ( grudgingly ) it looks absolutely wonderful and I am admittedly deeply envious yet my sensible head says it is what the Brighton faithful deserve after years and years of turmoil and misery. What was worse for them was while they endured this torrid time Palace in contrast were experiencing probably their most successful period in their entire history (although still very much a roller coaster ride I can tell you).
The Sussex club are very much a sleeping giant capable of greater things and they have languished in the lower levels of the football league for far too long.

Anyway again back to the report and I have actually made some time to explore what is one of my favourite  places having like most Londoners travelled here on many an occasion over the years. So much to do and so many things to see but having given up the booze years ago I opted for the nostalgic day at the sea side with a fish and chip meal and a stroll along the front. I also had to take the added precaution of sensibly switching off my 'Glad all over' ring tone off my mobile phone in case of an unwanted call during the game.
There is an agreement between Brighton F.C and the Withdean that all match tickets need to bought in advance so I had to venture reluctantly into the club shop in town. A ticket cost £24 but did include a travel train or bus voucher to Preston Park train station.
From Preston Park I foolishly followed some seaweed supporters down a dark eerie walkway by the side of the railway which seemed to go on for miles ( not a good idea when Joy Division are playing on your ipod !).
My Gothic football experience was about to continue when I came to the blood chilling abode of the ghastly men in Tesco shirts.
As stated before the Withdean is an athletics stadium and three sides were made up of uncovered stands ( because of the track ) all a fair distance from the pitch. The whole stand structure I sat in behind the goal looked very wobbly and fragile or maybe it was just the sight of the scaffolds beneath that added to this perception. However my unstable seat was like sitting on a rocking horse as any movement from those beside me would force me to lurch back and forth. Had the Sussex weather been wet and cold this evening it would of been too much to endure but luckily it was fairly mild.
The atmosphere was surprisingly good considering the lack of any comforts and being uncovered and a good section of the crowd were getting behind the home team. Brighton are currently top of League 1 and with the move to Falmer next season this contributed to the good spirits around the pitch. Gus Poyet has molded a team that plays a continental and attractive style of football not much unlike Swansea. There are also a number of foreign players within the squad including some young ex Argentinian third division players proving that his scouting  net work covers more than just the British Isles.
Brentford have got off to a mixed start with a poor league record but have also recently pulled off a feat of giant killing by knocking Everton out of the League cup. However this win did not sustain them for the more important league games and after to nights result they are now bottom of the table. The Londoners managed to perform well but succumbed to Brighton's superior brand of football. 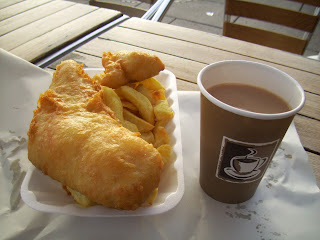 No sign of any Balti pies but having filled up on the traditional Brighton fish and chips plus being at the hated Withdean there would of been little hope of any heavenly indulgences for this game ( this was my penance after all ). Suffice to say that being Brighton had I of tasted a seaweed pie it would of course scored a big fat zero.With such a variety of good food outlets around the Brighton area there should be no problem in finding a great pre match snack or a drink or two.

The micro midget programme was again the £3 charged at most grounds but size is not everything and it was adequately full of Brighton facts and information......yuk !
May I finish this little piece by sincerely wishing the Seagulls all the very best for the future at the new Falmouth stadium and hope that you play us soon so we can give you another spanking . Bye for now

Posted by Unknown at Wednesday, September 29, 2010