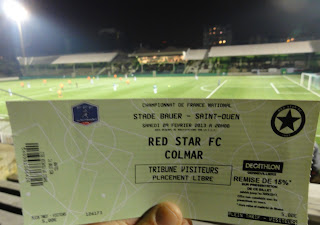 '' Red Dragons drape almost every bar as the Celtic hordes from the land of perpetual darkness cunningly evade the sleet and snow in the city of light. ''

Close your eyes and think of Paris, what do you see ?  The iconic Eiffel Tower, Notre Dame cathedral or two lovers having a leisurely romantic stroll along the River Seine beneath the stars ? The reality can be somewhat different, tacky cafes offloading expensive precooked crepes and stale croissants to unsuspecting tourists. Congested metro trains frequented by gangs of pick pockets and ragged beggars on mobile phones.

It can seem that around every corner of pomp and grandeur lies only dirt and squalor. A façade of granite and marble concealing crumbling concrete, McDonalds cartons and cigarette butts.

Yet for all it's negatives, Paris is admittedly beautiful, even to the harshest of her critics and has a unique ambience, charm and photogenic quality like no other. Like a Mecca of Love, it's appeal reaches across the globe and attracts the worlds highest number of sightseers and weekend romantics. They too walk continuously around the landmarks in giant circles never venturing out of the central areas as though they are tied by an invisible rope to the Eiffel Tower. 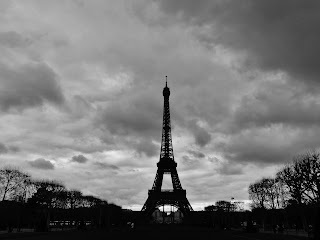 It's reputation as a centre of the arts, food and fashion has attracted high profile attention seekers to it's famous historic suburbs. The King and Queen of kitsch, David and Victoria Beckham have recently moved there to revamp two rapidly fading careers. David now probably too far into his twilight years has signed for French European pretenders P.S.G. on a pay as you go ( to charity ) contract.

It is too early to know what his playing contribution will be but what is guaranteed is that his employment will put bottoms on seats and shirt sales will undoubtedly go into orbit. 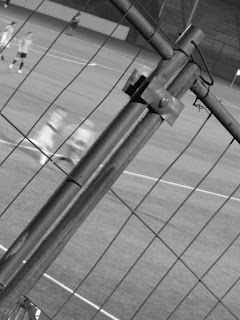 Today Paris has been invaded by the Welsh, here for their six nations rugby encounter with the French at the impressive Stade de France. Red Dragons drape almost every bar as the Celtic hordes from the land of perpetual darkness cunningly evade the sleet and snow in the city of light. Beneath the weathered neon flashing signs they sing loudly in high spirits and drink large quantities of Parisian beer.

While Paris St Germain will take most of the sporting glory for symbolising Paris, there is another club with equal claim for such status. Red Star, virtually an outpost in the St Ouen area, lying far away from the famous landmarks but a stones throw away from the Stade De France.
Here there are no glitzy bars or café's, just drinking dives and Turkish kebab outlets.

Red Star now lingering mid table in the third tier of the French League has a rich and distinguished history. Founded in 1897 by the legendary Jules Rimet, who would later act as the President of FIFA, the club would later be founding member's of  the French Ligue 1. There is some confusion as to the name Red Star although it is generally accepted that the name probably derives from the famous British shipping line.

The clubs golden years were between 1920 and 1934 when they won four coup de France titles. Since however they have gone into a slow decline and their last stint in the top division was in the mid 70s. 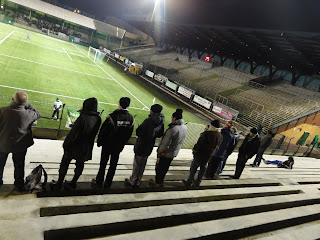 Tonight the historic club have a mid table clash with Colmar, a team from the Alsace region of Eastern France, close to the German border. A handful of supporters have made the long journey from this beautiful town to Paris. It is bitterly cold and they are unfairly placed in the very open and uncovered away end. Behind the goal almost an entire covered stand remains empty.

Red Stars ground the Stade de Bauer like the club has seen better days. A whole section of the away terrace lies roofless and in a state of decay. Crumbling concrete trenches full of debris and stagnant water are fenced off from the usable section. Here a layer of concrete has been relaid across the original foundations and the Colmar contingent are perched precariously on them like a row of budgerigars. Too cold to sit down and in the freezing windy conditions they do their utmost not to fall into the dark wet pits before them. They look across enviably at the home support sat in what must seem like luxury in comparison. 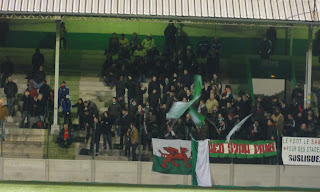 Red Star fans are small in number but loud and passionate. Throughout the game they continuously sing, although annoyingly it is restricted to only three repetitive songs. Algerian national flags are waved above a large Welsh banner, British migrants or confused rugby fans lost on their way to the Stade de France ?
Considering the weather conditions it is a commendable display and unfortunately not reflected on the pitch.

The game is dire, although thankfully not goalless. Red Star maintain a constant superiority throughout the 90 minutes only interrupted by the occasional Colmar attack. Toothless and lacking conviction, the Colmar fans have come a long way for what must seem like nothing. Huddled together they moan and shout abuse at their under performing team but to no avail. The home team deservedly wins by three goals to nil while all Colmar can take away is a batch of yellow cards and self pity. 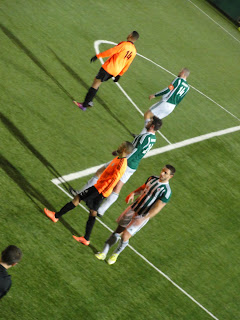 Cost of admission. 5 Euro's
Stade de Bauer. 7 out of 10. Old historic ground in a serious state of decline but still holds a certain amount of charm.
Capacity. 10,000
Floodlights. 9 out of 10. Glorious lighting for us floodlight addicts.
No programme
Nearest Metro Station. Porte de Clingnancourt ( end of line 4 ) 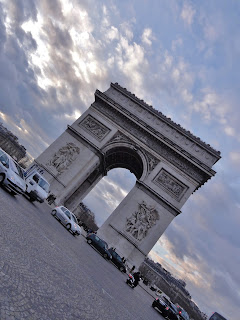 Budget Tips. Euro Star to Paris for as little as £69 return when booked in advance. Look for package deals and sales too.
A ' carnet ' of 10 transport ( metro, RER and buses ) tickets costs less than buying them individually and saves time queuing up.
Warning. Paris is very very expensive. At lunch time it is advisable to have your main meal as there are reasonable lunch time deals in many restaurants and café's. Alternatively eat plenty of bread, croissants and baguettes on the go. 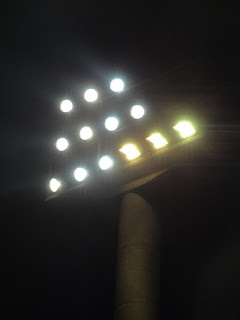