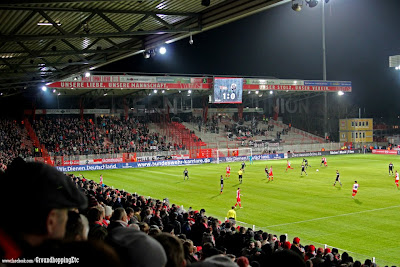 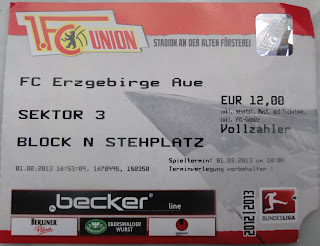 ' If Ian Curtis were to be reincarnated then Berlin would be his city of choice. A perfect punk rock landscape of high rise council blocks, graffiti and totalitarian war memorials. '

The world was a simpler place before the 90s. Divided along lines of political ideology and a bad dress sense, nothing epitomised this more than Berlin. On one side sickly sweet Coca Cola capitalism and on the other bushy eye browed Soviet style Communism. A once near devastated city on the front line of cold war politics and cruelly separated by an infamous wall. 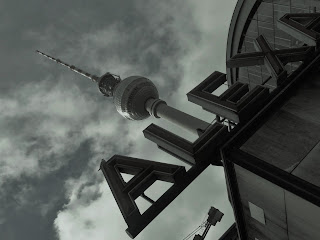 Under the intrusive and watchful eye of the state secret police, the Stasi, the East Berliners toiled and sacrificed falsely in the belief they were creating a workers utopia. In reality they were simply propping up a privileged elite and a corrupt one party state. Nothing symbolised this short lived country more than the futuristic Fernsehturm ( TV Tower ), a beacon of socialist engineering superiority or a domineering all seeing eye ?

Victims of a paranoid regime, life in comparison to their West German compatriots was exceptionally hard for the East Berliners. Under these unbearable conditions there was very little the ordinary person could do to vent their resentment towards the authorities. Yet strangely one such outlet was a little known football team, FC Union Berlin that was to in a small way symbolise greater freedoms and resistance against the totalitarian regime.

A fierce rivallry emerged during this cold war period with the Stasi affiliated football club Dynamo Berlin.While Dynamo won title after title under dubious circumstances, Union languished unsuccessfully in the GDR lower leagues. Yet it was of little or no consequence to their supporters if they win or lose, the main reason for attending matches being their loyalty to their club and opposition to the government and such corrupt sporting cronies as Dynamo. 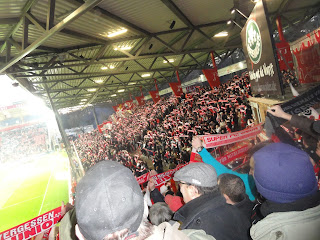 This camaraderie was to survive the cold war and even after reunification a strong fan culture has continued to develop at Union. While other German clubs have gradually surrendered to the forces of corporate football, Union along with other ' Kult ' teams like St Pauli proudly continue to resist such changes. Like the spirit of old the club refuses to bow down to the demands of the Bundesliga authorities and are one of the few clubs that actually responds to the views of it's supporters.

What has strengthened this bond has since reunification has been the reliance on Union fans to support their club through some financially tough times. Twice denied promotion to the second tier due to it's precarious financial situation and their stadium the Alte Försterei not meeting the stringent safety regulations needed for top level football. 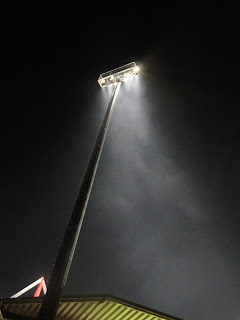 Innovative schemes have been adopted by the fans to raise much needed funds for the club or to save large amounts of money by volunteering themselves to save upon huge labour costs. One recent such endeavour has been the building of their new stand. Over the course of it's construction Union supporters without payment would dedicate their free time into the various tasks needed to complete the project.

Such commitment has given Union supporters and their club a great deal of needed publicity and respect not only throughout German football but across the globe. A truly noble feat considering their relatively lack of media coverage and success in obtaining silver ware. 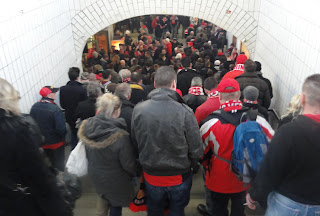 Today is late Friday afternoon and with the sun slowly setting another typical rush hour begins in the city. In the centre traffic grinds to a halt and commuters squeeze into already congested S-Bahn trains heading for the outskirts. Monuments, grand open public spaces and shopping malls give way to abandoned factories and residential blocks. Visually it can seem bleak and desolate but strangely alluring, an ideal album cover for a Joy Division record.

If Ian Curtis were to be reincarnated then Berlin would be his city of choice. A perfect punk rock landscape of high rise council blocks, Gothic domes, graffiti and totalitarian war memorials.

On closer inspection the communists have left a legacy of classic Soviet architecture intertwined with  traditional German urban planning. Such properties and locations are now being targeted by the upwardly mobile causing resentment amongst many of the current inhabitants. Gentrification has increasingly led to rising house prices and a higher cost of living.
The wall may of come down but clearly a divide still exists. 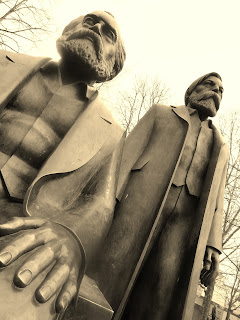 Around Köpenick S-Bahn Station there is an increased amount of activity. FC Union fans leave the constant arriving trains in a celebratory mood in preparation for their early evening match with FC Erzgebirge Aue. As each train departs it creates another wave of red and white that gradually descend upon the Alte Försterei. Many surf the waves and simply jump off at conveniently placed fast food and drink stalls along the way.

Unsuspecting neutrals and homeward bound commuters would be forgiven for thinking that this was a post match celebration such is the ecstatic mood. There is clearly a bond between Union fans and their club like no other. 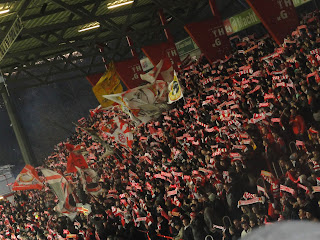 The pre match alcohol consumption is huge yet there is no hint of aggression that is so evident in English football. The fans congregate around the ground in small pockets with some of the more inebriated rushing off into the surrounding woodland to relieve themselves. There is also a big effort to keep the ground perimeter clear of rubbish and plastic bin bags are constantly stacked full of empty lager cans. This unwritten policy continues in the ground and even the large terrace areas are more or less devoid of discarded cans and serviettes.

All around The Alte Försterei  is the aroma of sausages. Second only to their love of larger they are are continuously eaten in abundance before and throughout the 90 minutes. The smoke generated from the fast food outlets peppered throughout the area creates a constant hazy like mist above the stadium. 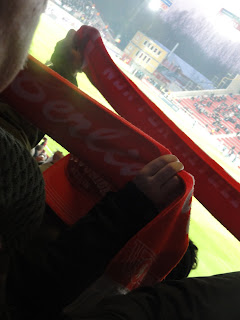 An hour before kick off there is a sizeable crowd within the ground. Three sides of The Alte Försterei are covered terracing areas and safety issues aside it obviously contributes to a better, more intense atmosphere in comparison to English all seater stadiums. The entertainment begins with a selection of heavy rock and punk songs building up slowly to the eagerly awaited crescendo, Union's anthem ' Eisern Union. '
With a selection of the Union ultras tirelessly waving huge banners and nearly the entire ground in full song it is a genuinely moving experience to witness.

The ultras without the added spectacle of pyrotechnics and special effects provided an equally spectacular show of song, chants and choreographed movements. Although contained in a large area behind the goal their efforts were appreciated and responded to by the other two sections of the home crowd. All this and of course the continuous supping of lager as the fans watched and listened to the events before them.

FC Erzgebirge Aue fans too had surprisingly arrived in large numbers considering their lowly position and 300 km distance from Berlin. Up until the third goal they too performed admirably and continued to support their team although the banners were eventually rolled up during the latter stages of the match. 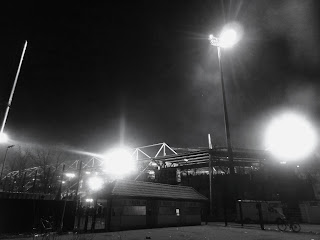 By the time the players were being announced the atmosphere had reached almost a frenzied level in anticipation of the match ahead. Union were after the kick off easily the more dominant side producing attractive flowing football.
When Slovakian Adam Nemec had put the home side one up with a stunning header in the 7th minute there seemed surprisingly a subdued response from the crowd. Although acknowledging the goal in the normal way of arms raised and roaring ( plus some wasted beer throwing ), it did seem somewhat quiet in comparison to all the events before. Possibly it empathises the importance of not winning but simply being there for your club and fellow supporters.

Right up until a 45th minute penalty Union dominated the field of play with the opposition beginning to show signs of frustration by resorting to a series of unnecessary niggly fouls. But the relentless home support continued throughout the match proving that the love of the Union fans towards it's club is a very special one indeed.

Thank you to Felix for the main stadium photo and his valued help in producing this article. His must read Facebook page can be reached by following this link ( Groundhopping etc. ) 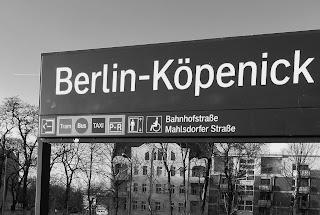 Cost of admission. 12 Euros
The Alte Förstere receives a well deserved score of 9 out of 10. A remarkable three terraced stadium that is a worthy testament to the commitment and loving support of it's fans.
Capacity. 21,500
Floodlights. 8 out of 10. Lovely set of the traditional variety.
No programme. Although I have since been informed that programmes were for sale
Nearest S-Bahn Station. Berlin-Köpenick ( 10-15 minute walk )

The Chicken Balti Chronicles bad Football food guide recommends Berlin's famous fast food currywurst. No visit would be complete without trying this local delicacy of chopped sausage covered in tomato sauce and curry powder. 7 out of 10 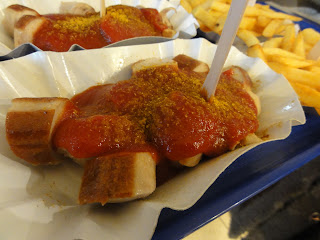 Budget tips. Various travel agencies offer cut price package trips to Berlin for as little as £150 for four nights ( including flights and accommodation ). Always worth while to check the travelzoo, lastminute etc websites for updated offers.
On arrival a Berlin Welcome Card will give you unlimited travel for 2, 3, or 4 days on all major transport plus discounts to museums, exhibitions and restaurants ( 3 days costs 26 Euro's ).

Cost of living is generally cheaper than most other parts of Germany so food and drink should not be a problem.
The aforementioned currywurst should make a quick cheap snack or there is always the option of dining on Berlin's other fast food invention, the doner kebab ( in case you wrongly thought it came from Turkey ). 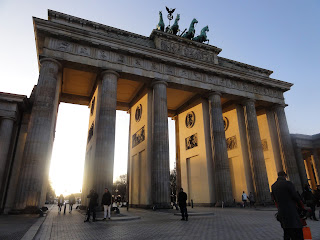