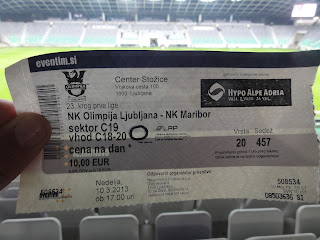 ' In sporting terms some could argue that with such a picturesque setting Ljubljana's citizens should only represent her more appropriately in the likes of chess or bowls. Anything else would seem just too vulgar. ' 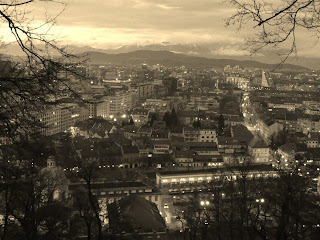 Ljubljana  is beautiful, maybe too beautiful. Surrounded by the Julian Alps and wedged neatly between Italy, Austria, Hungary and Croatia, this pretty ex Yugoslav Republic town has taken on some of the characteristics of it's neighbours but sensibly retains a distinct and unique identity of it's own.

This charming city can make you feel disorientated, one minute you could be mistaken for being in Venice or Vienna, turn a corner and you could be in Prague or Salzburg. Yet this difference in styles is kept together and harmonised by the the stunning buildings and planning of Slovenia's greatest architect Joze Pleznik. His beautiful baroque styled structures are peppered throughout Ljubljana, the most famous being the iconic Dragon Bridge.

Being the symbol of the city, green dragons can be seen everywhere from the flag on top of the dominating castle above to the tacky fridge magnet souvenirs sold to tourists. Inspired by the ancient mythical battle of Jason and the Argonauts against a fiery beast on the river Sava, Ljubljana claimed the dragon for it's own. Naturally the dragon is also the symbol of it's football team Olimpija.

In sporting terms some could argue that with such a picturesque setting Ljubljana's citizens should only represent her more appropriately in the likes of chess or bowls. Anything else would seem just too vulgar. 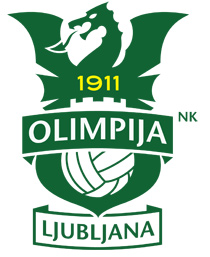 Olimpija are in a fact a new club having officially formed in 2005 but considered the spiritual forbears of the original club that went bankrupt the year before. Arrogantly and without permission from the Slovenian League the new club have inherited the history of the older club and their shirt crest shows their formation as being 1911.

In the Yugoslav days Slovenians were mocked by the other Republics for their preference towards winter sports and not the beautiful game. However since independence in 1991 the national side have improved considerably, achieving reasonable results against more prestigious opposition in both the European and World Cup final stages. Not a bad record for a country the size of Wales. 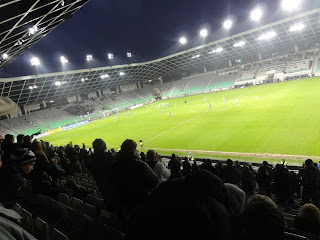 Another spill over from the Yugoslav days has been Olimpija's grudge match with fellow Slovenians Maribor. Mimicking on a far smaller scale the match of Belgrade giants Partizan and Red Star the game between the two is nostalgically known as the Eternal Derby.

Today is another derby day and unlike Belgrade, life continues on normally. It is Sunday and the snow has receded to be replaced by perpetual rain and drizzle. With darkness approaching drunks and beggars around the main square get ready to go home after a long hard shift. On the river banks outside the many bars and cafes locals leisurely sip bela kava's under shelter.
Here there are no riot cops or groups of chanting supporters. This is a derby like no other. 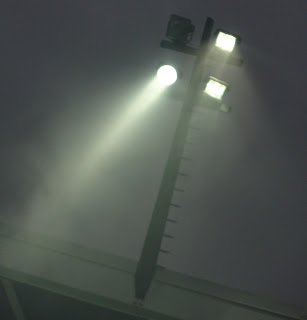 Ljubljana's ground, the Stozice Stadion lies quite a distance from the tourists and the centre of town. It is only around the train station that any kind of police presence can be detected awaiting the travelling away fans from Maribor. The expected invasion is but a trickle as Maribor supporters in very small numbers quietly walk towards a solitary bus stop.

Around the multi sports complex that comprises the football stadium songs and chants are at last heard but the culprits remain hidden from view. The Green Dragons, Ljubljana's famous ultras are stirring in their lair ready for the contest ahead. 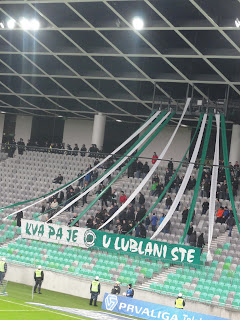 With kick off less than an hour to go it is still relatively quiet outside the ground. The typical robo-cop riot police ominously patrol the perimeter in small numbers and supervise closely the small groups of fans that pass them. Security is water tight on the gates as stewards demand I.D cards and reluctantly confiscate umbrellas from wet and weary supporters.

Once in they make their way to the refreshments for a hot drink and snack. Surprisingly for a coffee obsessed nation, on top of an alcohol ban there is no caffeine inspired refreshments, only fruit tea and juice ! It seems the stadium authorities wish no one to be overly stimulated.

Yet even more strangely is Olimpija giving official permission in allowing the few Green Dragons in attendance to use the TV scaffolding for displaying club ribbons and banners. They clamber dangerously high up above the seating area and carefully pass down the green and white ribbons to their colleagues below. It is not until half way through the the first 45 minutes that the numbers swell and their full presence is felt. 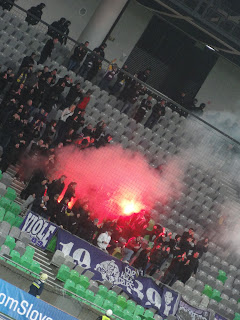 Even though this match represents one of the biggest domestic games in the league fixtures it still struggles to attract a sizeable crowd. Disappointingly two thousand have attended maybe pushing home the point that Slovenes are far more interested in ski jumps and bob slays than a so called eternal derby.
But the fans that have attended are passionate and with the clubs cooperation are set to put on a show that entertains all.

The menacing looking police at the rear gradually move slowly forward and watch the game beside stadium officials, Red Cross crews and fans. Even the dragon mascot manages a friendly chat with the forces of the law and the strange spectacle must look surreal to onlooking bystanders. 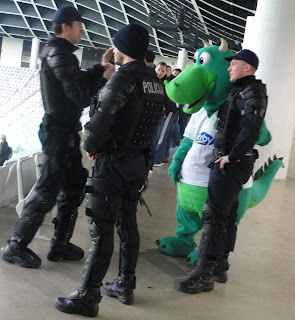 Maribor too have turned up in small numbers but were able to quieten the dragons roar by scoring the first goal in the 22nd minute credited to Bosnian striker Nusmir Fajic. First visual display to Maribor as the visitors set off a few red blazing flares amongst a pocket of around 40 supporters. At the other end the Ljubljana contingent ignore this rude and unexpected interruption and continue to sing along. 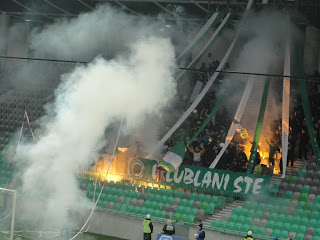 Then unexpectedly and obviously planned by the dragons, they spectacularly unleash their own impressive display. In what seemed like a form of spontaneous combustion ( but obviously not ) the Green Dragons caused an explosive spectacle of fireworks and confetti followed by the now traditional flare show. The stand glowed orange and for a few minutes the entire ground was covered in thick smoke. The players continued to participate in the game pretending not to be impressed or effected. 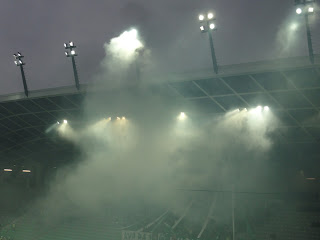 Even though the Olimpija players had undeservedly gone behind with the increased visual and vocal support they managed to step up to another level. It wasn't until the second half that they were able to equalise by a fine goal scored by Montenegrin Nikola Nikezić in the 58th minute.

Table toppers Maribor had the handicap of being reduced to 10 men when goalkeeper Jasmin Handanovič was sent off for violent conduct in the 70th minute. Amazingly Olimpija missed the awarded penalty and were unable to capitalise and the game finished a disappointing one all draw.

With the game ended the Dragons continue to sing for a few minutes before slowly beginning to take down their flags and banners. Supporters gather around the safety stewards near the gates and queue to retrieve their umbrellas from the large stockpiles collected. Meanwhile life in the capital goes on and tourists wander the beautiful streets unaware that there has even been a game of football. 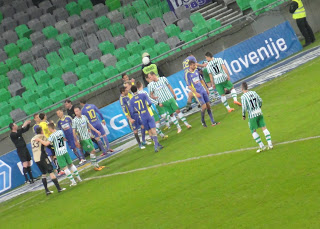 Cost of Admission. 10 Euro
Stadion Stožice gets 8 out of 10. Although a modern type design it remains small, compact and atmospheric. Spacious and fan friendly although it could do with improved amenities.
No programme.
Floodlights. Built within and around the bowl like structure and not very impressive. 5 out of 10
Number 6 bus from outside the railway station should get you to the football Stadium ( 15-20 minute journey ). 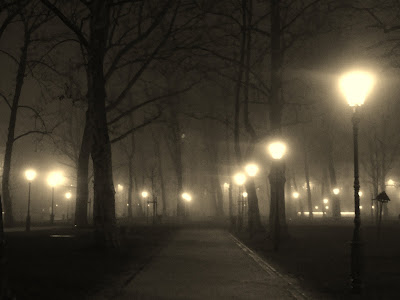 Today's bad food guide brings you Slovenia's best known cake the custard oriented Kremna Rezina. Hailing from the nearby Bled region this wonderful sweet delicacy is sold throughout Slovenia and the Balkans. Recommended that you at least try and have one at an established patisserie for increased quality and enjoyment. Cost should vary from 2-4 Euro.   9 out 10 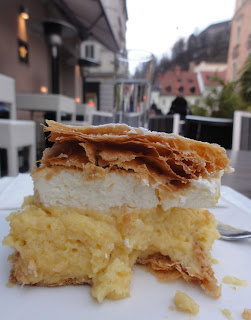 Another must if you are feeling peckish after a day of beer, pizzas and coffees is to try Ljubljana's ( and probably the worlds ) best falafel cafe. Situated near to the Dragon Bridge and named not very originally ' falafel ' it is another CBC cheap eats must try.  Price 3-5 Euro. 9 out of 10 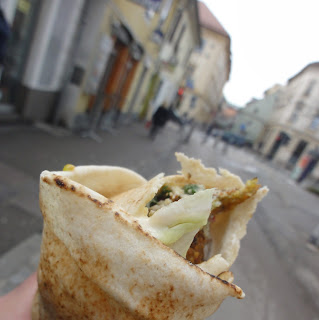 Budget Tips. Amazingly Ljubljana is still relatively unknown in the U.K and flights are usually fairly cheap depending on the time of year you are travelling. I saw flights in December for £15 ! Admittedly it was cold but the surrounding views of the mountains and the nearby Bled region are spectacular. It is one of the most beautiful places I have ever seen. Obviously if you hate the cold then the ideal time to visit would be around spring or early summer.
Accommodation too can vary and cheap hotels are limited in the city area. I did manage to locate a few that were under £30 a night although it's probably wise to book well in advance.