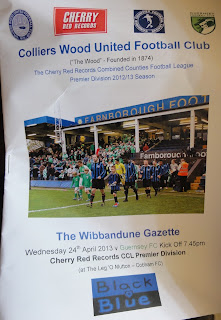 
Foul stinking fumes emerge from the bowels of the earth along the narrow corridor. Escaping small iron ducts in the ground it slowly evaporates but lingers long enough for the unfortunate residents to choke on the putrid stench. Luckless vehicles caught in the bottleneck, like rats in a trap only adds to the pollution as smoke splutters and belches from near motionless engines.

A solitary drunk sits laughing oblivious to his surroundings on a bench outside the underground station seeking refuge in the sanctuary of the mind and the bottom of his bottle. Sirens too scream eerily in the distance as the sun slowly descends behind giant grotesque electric pylons and storm clouds approach like a layer of black dust.
On the horizon over looking this vision of Hell is the dark tower, cold, desolate and empty.

An extract from J.R.R Tolkein's Lord of the Rings describing the dark lords dormain Mordor ? The Northern lines dreaded outpost Morden even ? No, but an apt narrative focusing on South London's Colliers Wood in rush hour.

Squeezed between the more affluent leafy Wimbledon and urban Tooting, for outsiders this small area is seen as nothing but a major annoyance to drivers as the wide main road disappears into an inadequate narrow residential high street plagued with eternal traffic jams. The old sewage works by the River Wandle although closed down still inexplicably is the cause of bad odours that emit from the local drains along the main road. 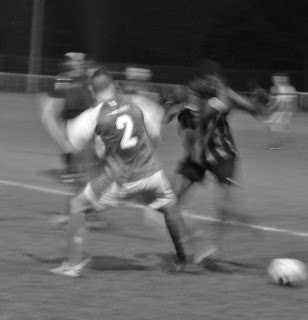 Colliers Wood's dark tower is a post apocalyptic styled monstrosity of a building that now lies empty decaying and neglected. It has infamously topped the worst building in the capital list for a number of years and has reluctantly placed this relatively unknown small London outpost on the map. 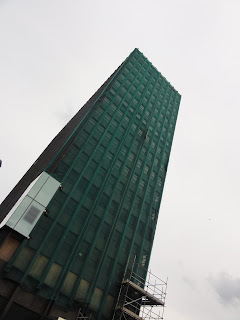 If the all seeing dark lord Sauron really did inhabit this tower then bypassing the abandoned car wash he would best be advised to cross over the busy road and stay in the more comfortable and mysteriously placed Express Holiday Inn ?  For the local populace the tower has become a symbol of degeneration and urban squalor and continues to be the subject of heated debate between the council and the buildings owners over it's condition and future. 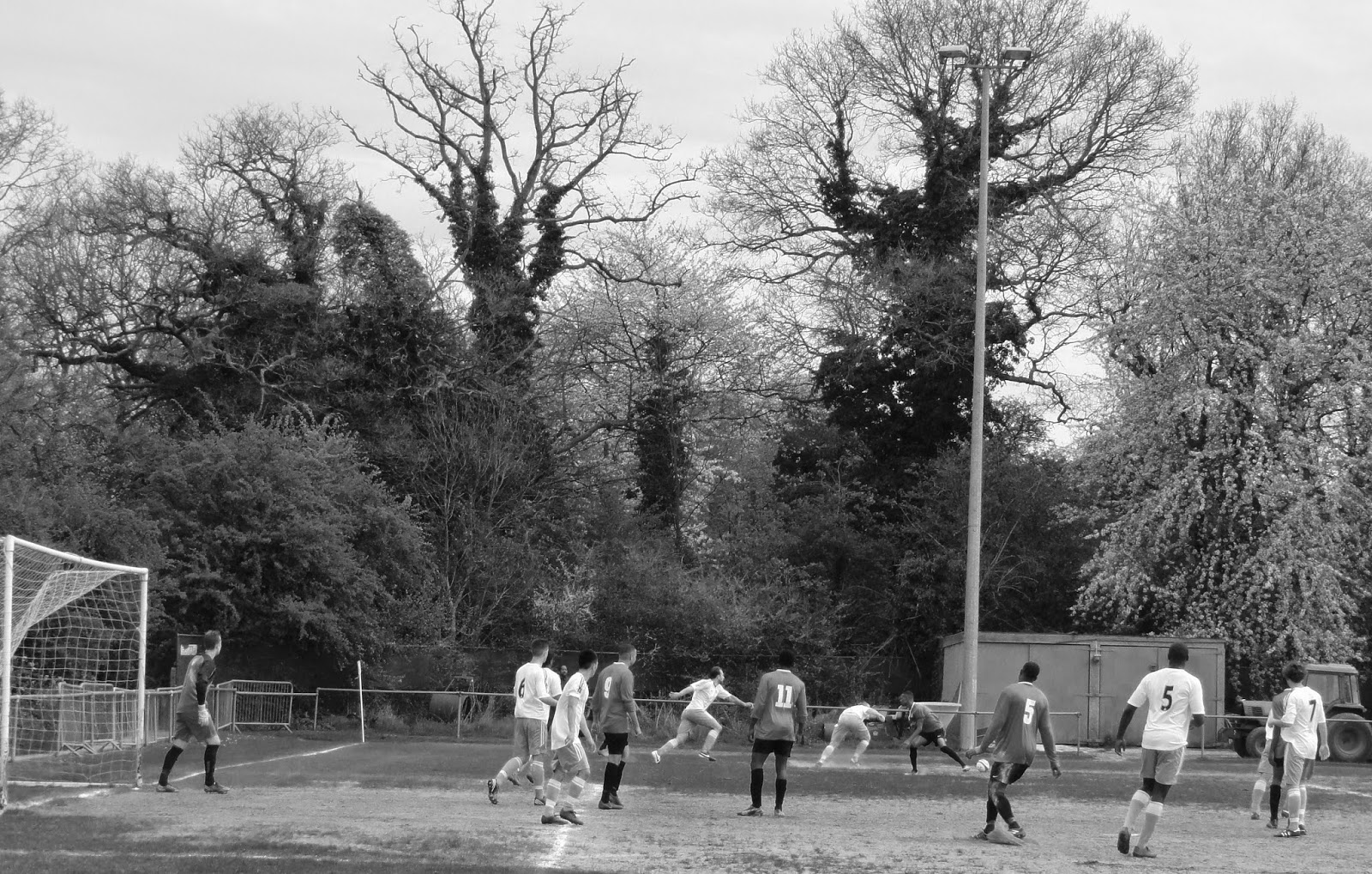 What must a weary foreign traveller think when he first slowly ascends the station escalators and sets eyes on such a nightmarish landscape ?  Have I come to the right place ?  Is this a joke ?  Has the world ended ?  Indeed for looking out a window from the Holiday ( Hell ) Inn opposite the tower at dawn you would be greeted by a sight of Romanian squatters hanging out their washing on the grey crumbling concrete walkway like survivors from a nuclear holocaust.

Meanwhile looking towards the banks of the Wandle you would view groups of hopeful amateur fishermen casting tit bits into the water in the hope of a catch while homeless young men in sleeping bags stir slowly in the park. 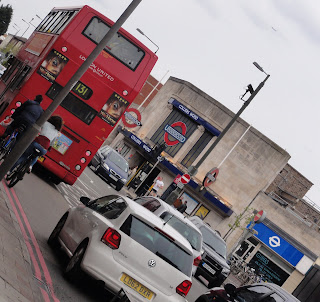 Yet off the beaten track Colliers Wood is steeped in a rich and interesting history. The 12th century ruins of Merton Priory lay fenced off and protected near to the Sainsbury's superstore and this was also the location of William Morris's world famous Mills that have now been stylishly converted into a recreational market area.

The wood itself sadly has been swallowed up by spreading urbanisation and the last remnants of it disappeared sometime in the mid nineteenth century.

The football team representing this area reflects the town in the sense that being one of the oldest clubs in the country and indeed the world ( formed in 1874 ) it holds a historic importance but very little else. Languishing contentedly in the lower divisions since it's formation and currently in the Combined Counties Premier Division it has been squeezed off the map and out of it's native home by Colliers Wood's more prestigious neighbours, Tooting and AFC Wimbledon.

Playing presently far from it's native home within an isolated and quiet part of the Raynes Park / Kingston border there are many residents within Colliers Wood not realising that they have a football club at all. It's remote hard to find location in a leafy woodland enclave off a busy motorway means that numbers for games remain low at the clubs home, the Wibbandune Sports Ground. 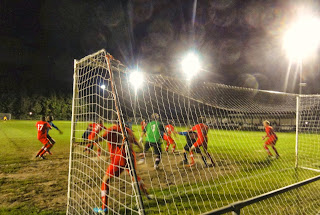 Yet those that do bother to venture are treated to a match set in a tranquil and pretty setting of a pitch surrounded by a façade of woodland and greenery. Only the sound of heavy traffic and the twinkling of headlights the other side of the trees gives away that this location is in fact South London and not some football field in far off mid Wales.

However for the 2012-13 season the club due to the terrible weather have been plagued with a series of pitch problems and have had to temporarily move to Cobham FC to play their remaining league fixtures. It has been a financial disaster for the small club with a bill of over £36,000 being placed before them although the contractors too will thankfully have to contribute some of the cost for errors in trying to implement an effective draining system. 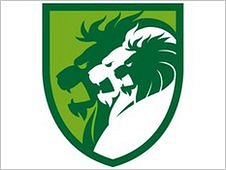 Tonight sees ' The Wood ' up against Combined Counties present media super stars Guernsey FC. The islanders have been the subject of huge interest with a large investment and an intended mission to eventually reach the heights of league football. This has come at a high price and the inclusion in the English non league structure has meant that Guernsey have had to start from the very bottom of the league pyramid. Also they have agreed that for all home games they are to pay for the away teams flights, accommodation and expenses !

Guernsey too have been victims of the weather and their remaining fixtures have been stockpiled into an impossible amount of games to play in the last few weeks of the Combined Counties Premier season. This was Guernseys 4th game in five days and the emergency has been met with the help of Le God as Matt LeTissier has come out of retirement to aid his native club. 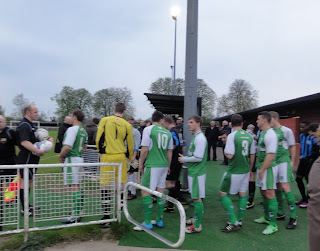 Along with every Guernsey match comes a mini media circus as it attracts both local radio and TV interest not to mention a substantial amount of noisy away support.  Some are simply Island exiles while others break the bank ( easy when you pay less tax ) to follow the Green Lions across the breadth of the South of England. There were a good 40 or so, easily recognisable in their green and white scarves and matching tracksuit tops.

In the middle of the small Cobham main stand a space was made up for a temporary press box to accommodate a two man camera crew broadcasting the game live back to Guernsey. The commentators exaggerated  report of the action was heard over the occasional shouts of support from the Green Lions. Colliers Wood too could be deemed as exiles playing a good 20 miles from home yet had a credible turn out with a handful of dedicated supporters in attendance. 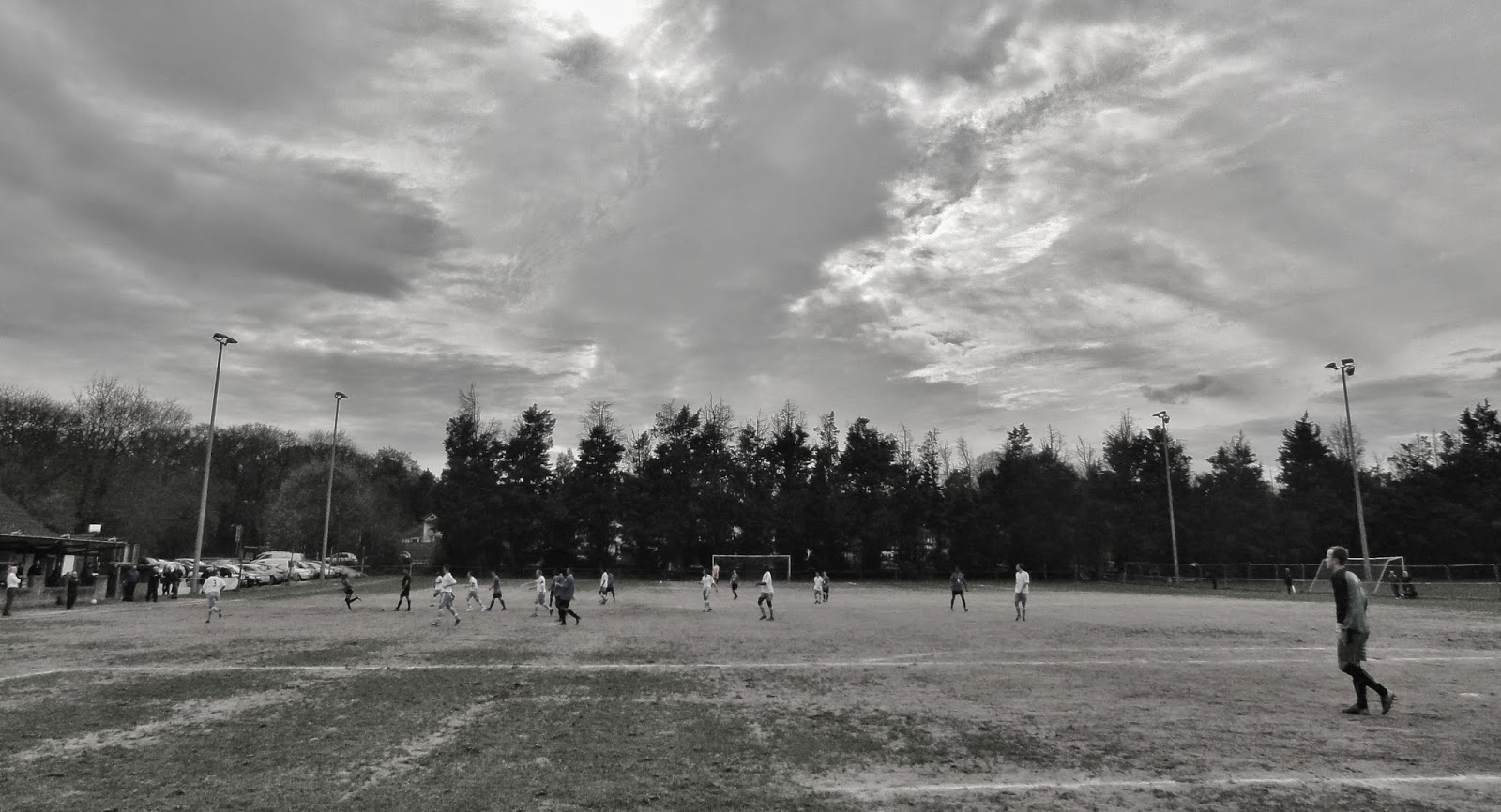 Colliers Wood kicked off clearly taking advantage of their opponents fatigue by pounding the Guernsey defence with some testing placed balls added with pace. Eventually the favourites regained control though superior possession yet were never able to shake off the tenacious home side fighting for league survival. Alan Le Prevost put the islanders 1,0 up before a battling home side equalised on the 37th minute. Just a minute later and going into half time Guernsey struck again to go 2, 1 up and were looking likely victors yet ' The Wood ' were able to score before the interval, keeping them in the game.
The scales of fortune seemed to tilt back to Guernsey as due to a collision, Colliers Wood young goalkeeper was taken off to be replaced by an outfield player.

Come the second half and Colliers Wood unexpectedly came out even more determined scoring within 11 minutes making the most of their limited possession through some clinical finishing. Rather than sit back and defend their slender lead the home side continued to bravely attack and this took it's toll on the now weary islanders. On the 72nd minute Colliers Wood struck again and the Green Lions were obviously flagging looking for some added help and inspiration. Their pleas were met by the début of Le God, Matt Le Tissier as the Legendary 44 year old came on with 10 minutes to go. Cometh the hour, cometh the man yet clearly Le Tissier has not been involved in a competitive match for some time and he was unable to prevent his side from losing this crucial promotion match. 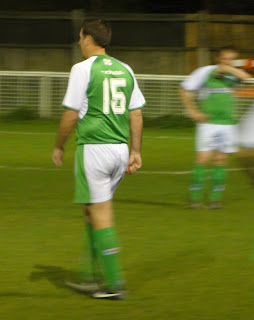 The result leaves Colliers Wood in a healthier position for Premier Division survival. Guernsey on the other hand still have a horrendous pile up of fixtures and will have to play 20 league games between the start of April and 6 May, including four in a row over the Bank Holiday weekend. Time, resource and luck added with some divine intervention may decide the fate of the men from the Channel island to further promotions or condemned to another season in the Combined Counties. 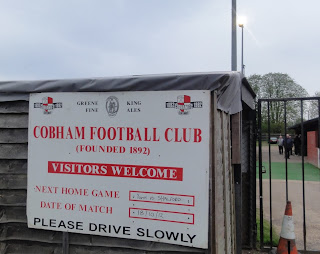 Cost of admission. £6.00
The Leg of Mutton ground gets 7 out of 10. Nice atmospheric ground in a pleasant semi rural setting.
Programme. Free with admission cost.
Floodlights Typical lighting for this level of football
Bad food guide. Club bar sold tea, coffee, beer and rolls for a reasonable price. Outside Cobham railway station is a Chinese fish and chip shop. Good for a portion of chips before getting a mini cab directly opposite.
Nearest Station. Cobham and Stoke D’Abernon is a bloody long walk from the ground and I advise a taxi from the mini cab office outside the railway station. 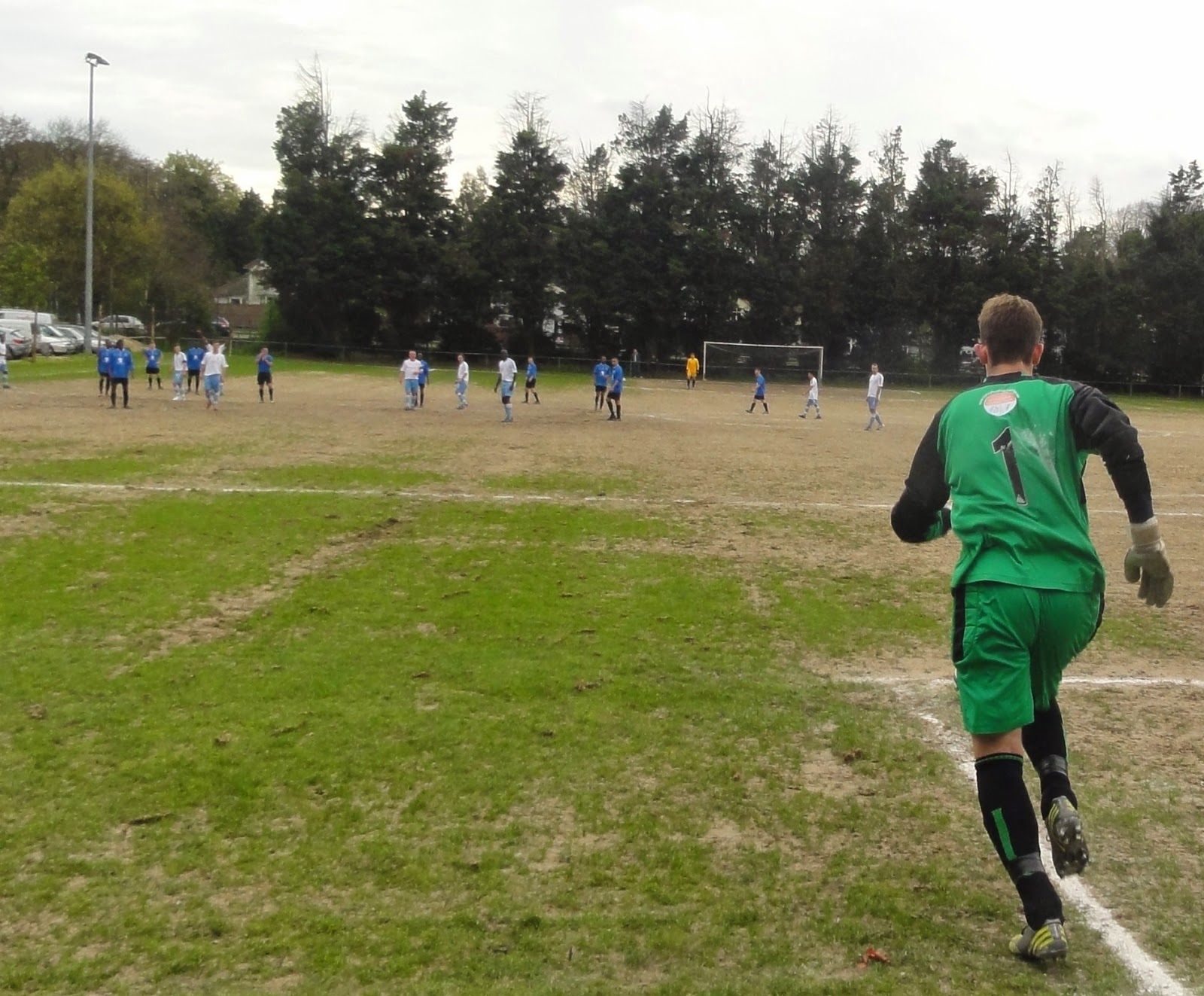