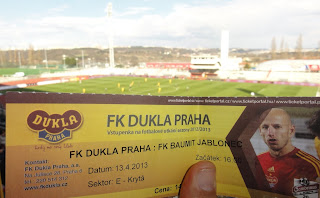 ' The grooms father proudly boasted of an itinerary that included seven games over the weekend period starting with an 8th tier match that night. ' 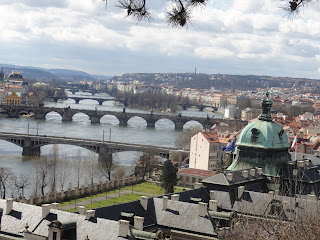 Prague a city that has for centuries relatively escaped the physical ravages of war but has also fallen victim to invading armies, occupations and the territorial claims of opposing empires. Yet the period buildings and beautiful cobbled streets have fortunately remained unscathed.  Even the Soviets had the sense to leave most of the classic architecture intact and not demolish them in favour of their usual imposing bland modernist structures. The huge castle still dominates the skyline looking down on a picture postcard image of old tiled red rooftops and Gothic church spires. 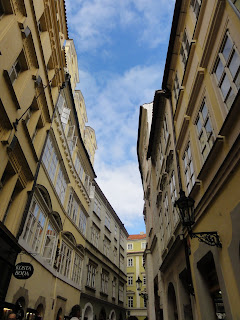 Today the only invaders are lager seeking stag-do parties intent on a perfect diet of cheap quality beer, hearty sausages and football. Such ideal male combinations have attracted hoards of party goers, sausage fiends, weekend drunks and ground hoppers. They appear in their thousands on a relentless conveyor belt, arriving by train, car and on planes that are all for better words flying pubs.

The stewardesses attempts at the manual emergency procedure was a disaster. Half the passengers ignored her or slept and the other half did their best to distract her by pulling faces and asking for her telephone number. Her pleas for wayward standing passengers to sit down was equally disastrous and she eventually surrendered to the situation and began to distribute the demanded cans of mini beers.

Now satisfied a man called Dave isolated at the back staggered down the aircraft aisle to join his mates and by doing so obstructing a woman from returning to her seat. The inebriated future groom slept awkwardly, chin in chest while the rest of the party congregated around his seat. 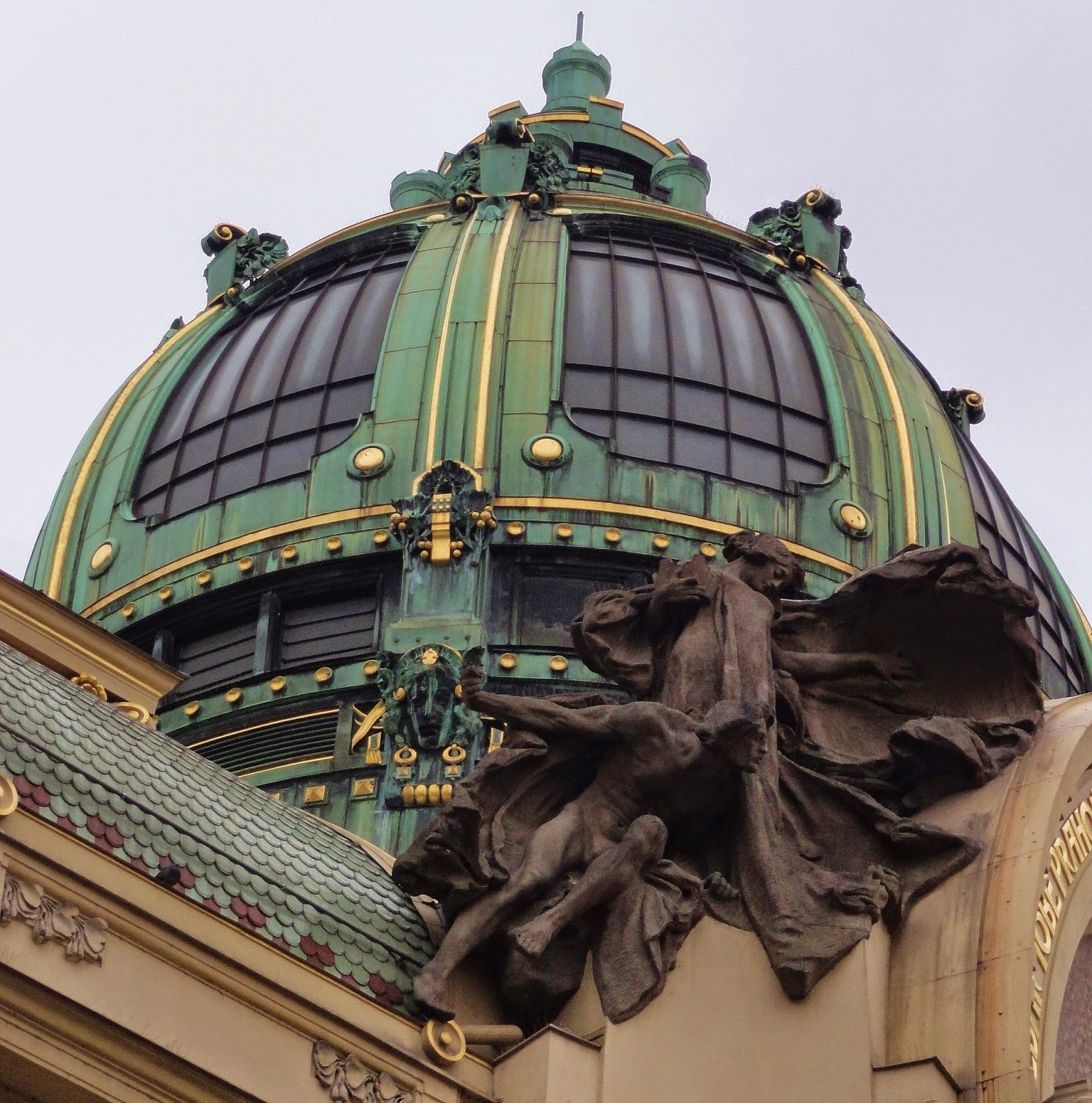 The talk was of course footie and Dave a self appointed sports expert was a wealth of information concerning the Premiership and everything football. His personal in depth knowledge of certain players either meant Dave knew intimately the entire Chelsea squad or he did a lot of tabloid reading and watched nothing but Sky Sports. Both conclusions draw to the fact Dave was extremely boring and knew of no other worthwhile conversations.


Although the others would try to deviate from talk of the Premiership Dave would simply reel them back in by drowning out such conversation with his loud and booming cockney voice. Eventually two of the so far quiet older members of the stag party mustered enough courage to mention the attractions of Prague, Czech lager and tomorrows derby between Sparta and Slavia. Thankfully Dave became on the whole strangely quiet. 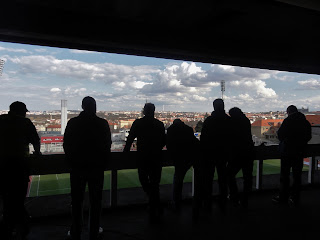 The grooms father proudly boasted of an itinerary that included seven games over the weekend period starting with an 8th tier match that night. Even Dave managed to distract himself form the Sun sports pages and peered looking shocked over the top of his newspaper. The type of football with two men and dog in attendance was well out of his comfort zone. Imagine the shame of it when he returned to work and his colleagues would have to listen to tales of small foreign teams that he and they had never heard of.

The grooms Dad then went on to mention that for him the highlight of the weekend would be going to the legendary Dukla Prague before the city derby. His son briefly awakened then smiling went back to sleep snoring, Dave clearly shaken returned worryingly back to his newspaper. 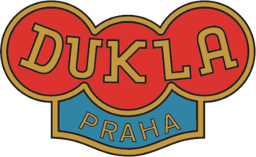 Although Sparta and Slavia are clearly the top dogs in Prague, ask any knowledgeable football person outside the Czech Republic and Dukla Prague would be right up there. Having won 11 Czechoslovakian Championships in the 50s and 60s their greatest achievement was reaching the semi finals of the European Cup in 1967 being beaten by eventual winners Celtic.

The original Dukla was essentially an army team and this union would later lead to it's down fall as it struggled to attract sponsorship after the fall of Communism in the early 90s. It's demise saw them being relegated for the first time in it's history directly to the 3rd Division for financial reasons, merging and finally becoming FK Příbram. 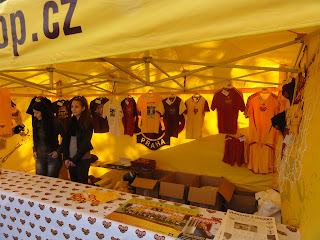 However the modern Dukla are what is termed a cuckoo club. Having started as FK Dukla Dejvice in 1958 ( even wearing a red and yellow strip ) they were renamed Dukla Prague in 2001 and then took over second tier club Jakubčovice in 2007. This enabled them to jump from the fifth level directly to the second and with some solid investment eventual promotion to the Grampas Liga in 2012. 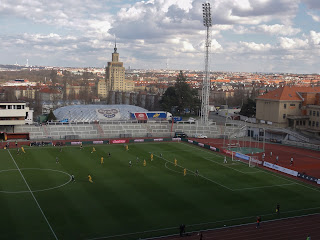 With the new name and playing in near identical kits to the original Dukla, the club have unofficially inherited their rich history. They have utilised the famous and visually striking Dukla brand and all merchandise uses this to the full. Retro mugs, shirts, pendants and even yo-yo's are sold via the internet and at the club shop tent during home matches.

Added to this has been the cult status in the U.K credited to the club by 80s band Half Man, Half Biscuit that sung about a desire for a Dukla away top and encouraged it's fans to wear the shirts to gigs. 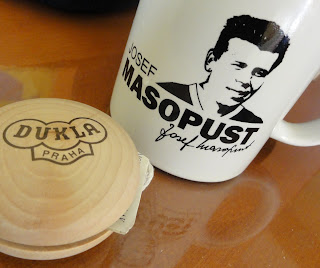 Today's afternoon clash with high flying FK Jablonec was important for Dukla to achieve a victory and progress further up the Grampas Liga. Already their season has seen them emerge as the capitals second most consistent team with Slavia Praha struggling disappointingly in mid table.

Dukla play at the Juliska Stadium which is a duel purpose football / athletics complex in the outer suburbs of Dejvice. It lies on a elevated position overlooking the city and thankfully the athletics track that surrounds the football pitch. 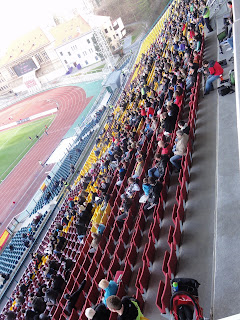 At every home match the first thing you hear is the banging bass drums of the reputedly oldest ultra group in the Czech Republic. A group of predominantly 50 to 60 year olds  position themselves in a lower area of the main stand below the home support and wave the customary banners and sing the customary songs. They are joined by some wannabe younger whipper snappers, unperturbed the older members out sing their contemporaries but manage a sneaky look at the attractive female support waving flags beside them.

The team emerge to Dukla's anthem, a rousing rock ditty by Czech hardcore punk band Našrot. Dangerous tunes for such elderly supporters but they look like they can handle the occasion and probably have a few Nirvana C.Ds hidden at home. 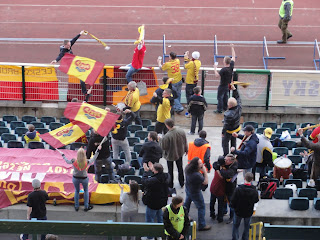 Amongst the support in the large main stand was a constant chorus of British accents and it wasn't long before they visibly made themselves known. The novelty of having a pint and watching a live game was too much excitement for some and they congregated around the lager stalls like bees round honey. Holding two pints, camera, Mustard, sausage and wearing added back pack and accessories, they resembled human buckeroos ready to flip over at the slightest nudge. Amazingly they were able to keep their balance on the rather steep seating and enjoy the action below. 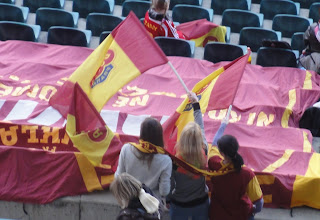 At ground level things were not going so well for the home side. Jablonec had not just come here to make up the numbers and were themselves seeking to to cement a top three finish in the Czech Liga. They dominated the first half going a goal up after 24 minutes and the signs were that they would more than likely increase the score. However Dukla persevered and against the run of play managed to claw a goal back before the half time interval.

Yet come the second half it was a complete reversal and Dukla took the initiative of the partisan support and more than controlled the proceedings for the next 45 minutes. Jablonec were clearly rattled and taken back by the change in events. With 10 minutes to go they were 3, 1 down and a final flurry by Dukla saw the famous name brand finish the match 5, 1 up. 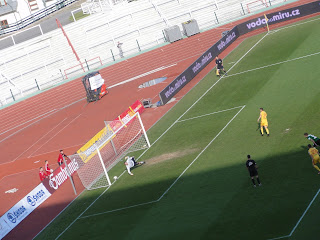 With the final whistle blown the home crowd and Czech football enthusiasts checked out briefly before making their way to the Sparta, Slavia derby. On the way out of the stadium the departing crowds passed a bronze statue of the original Dukla Praha's greatest ever player Josef Masopust. Although now a different Dukla he seemed to look somewhat approvingly on the scenes around him, maybe contented that the legendary name lives on. 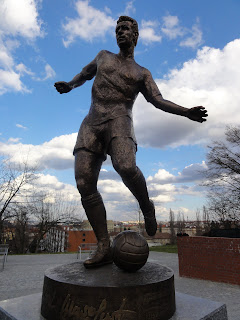 Cost of Admission.140 CZK ( £4.60 )
Juliska Stadium receives a credible 8 out of 10. Fantastic views of the city and ground below even with an athletics track around the pitch. Good facilities including great fast food and alcohol.
Floodlights. 8 out of 10. Classic Eastern European gems positioned in a rather beautiful setting overlooking Prague. 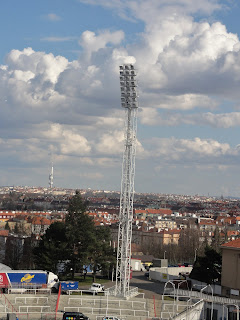 Bad Food Guide. Dukla quality sausages come with a slice of brown bread and dollop of hot mustard and usually washed down with a pint of Czech beer. Football as it should be. 9 out of 10 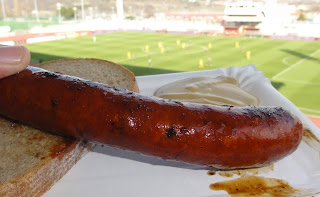 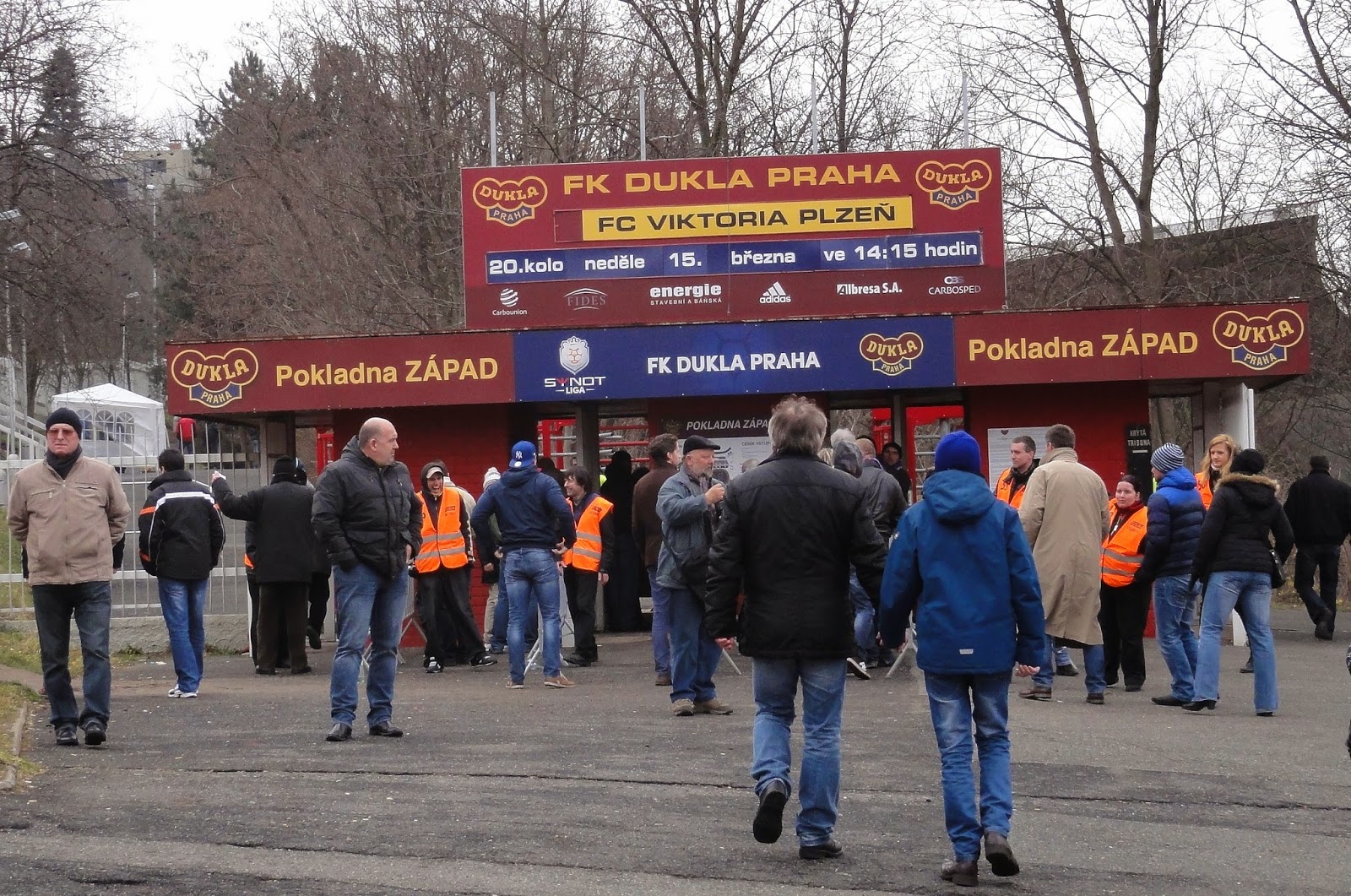 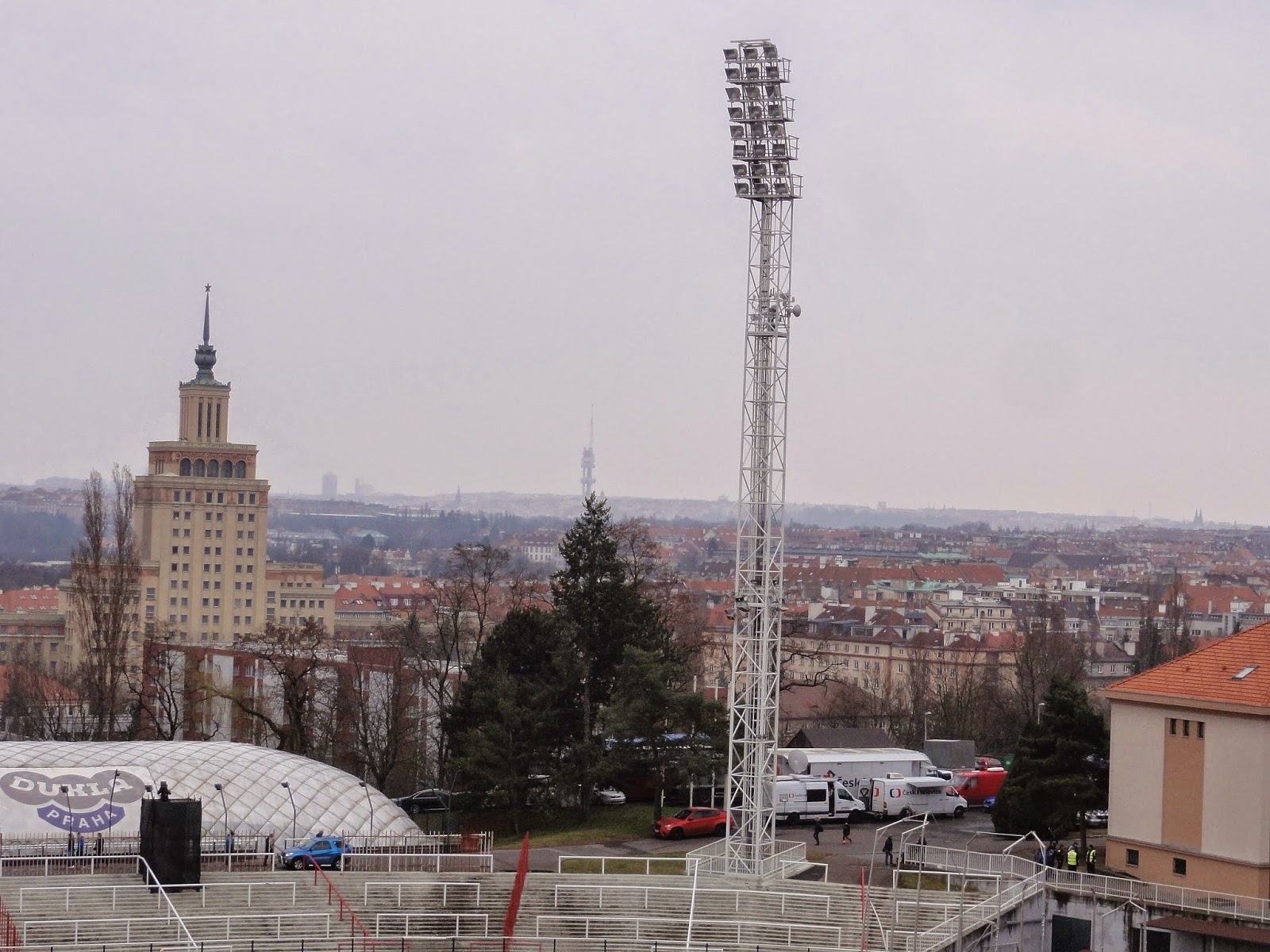 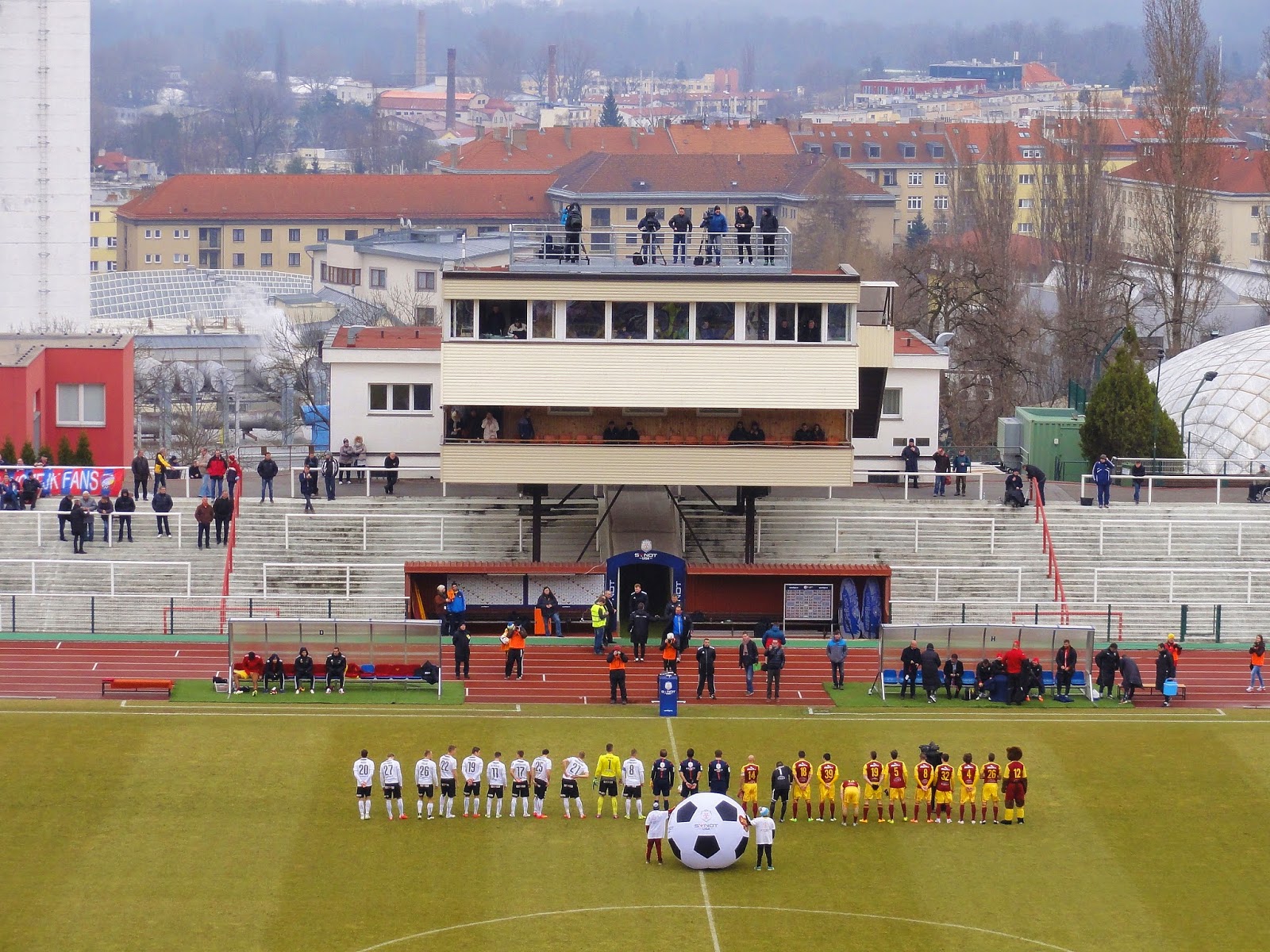 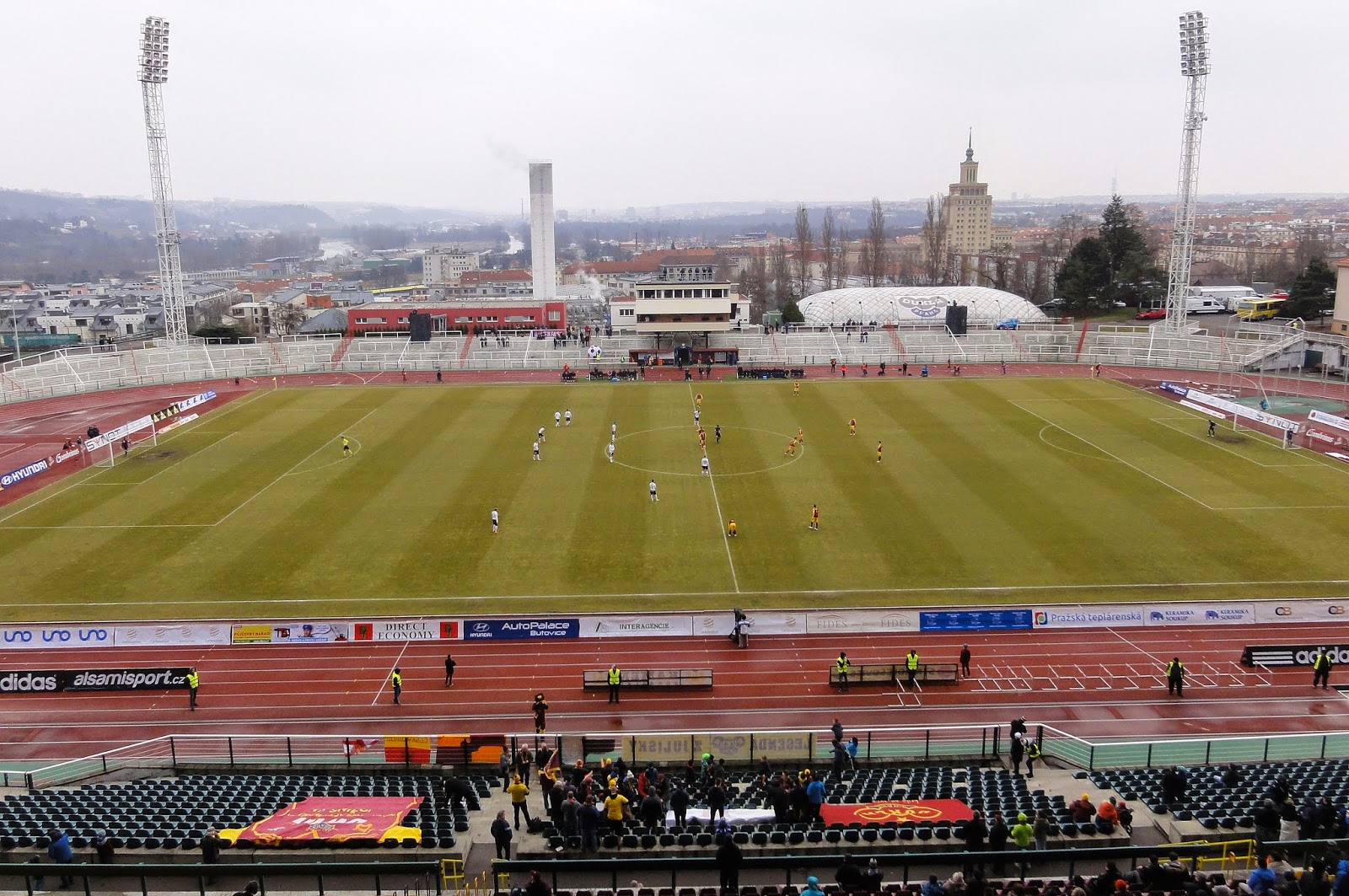 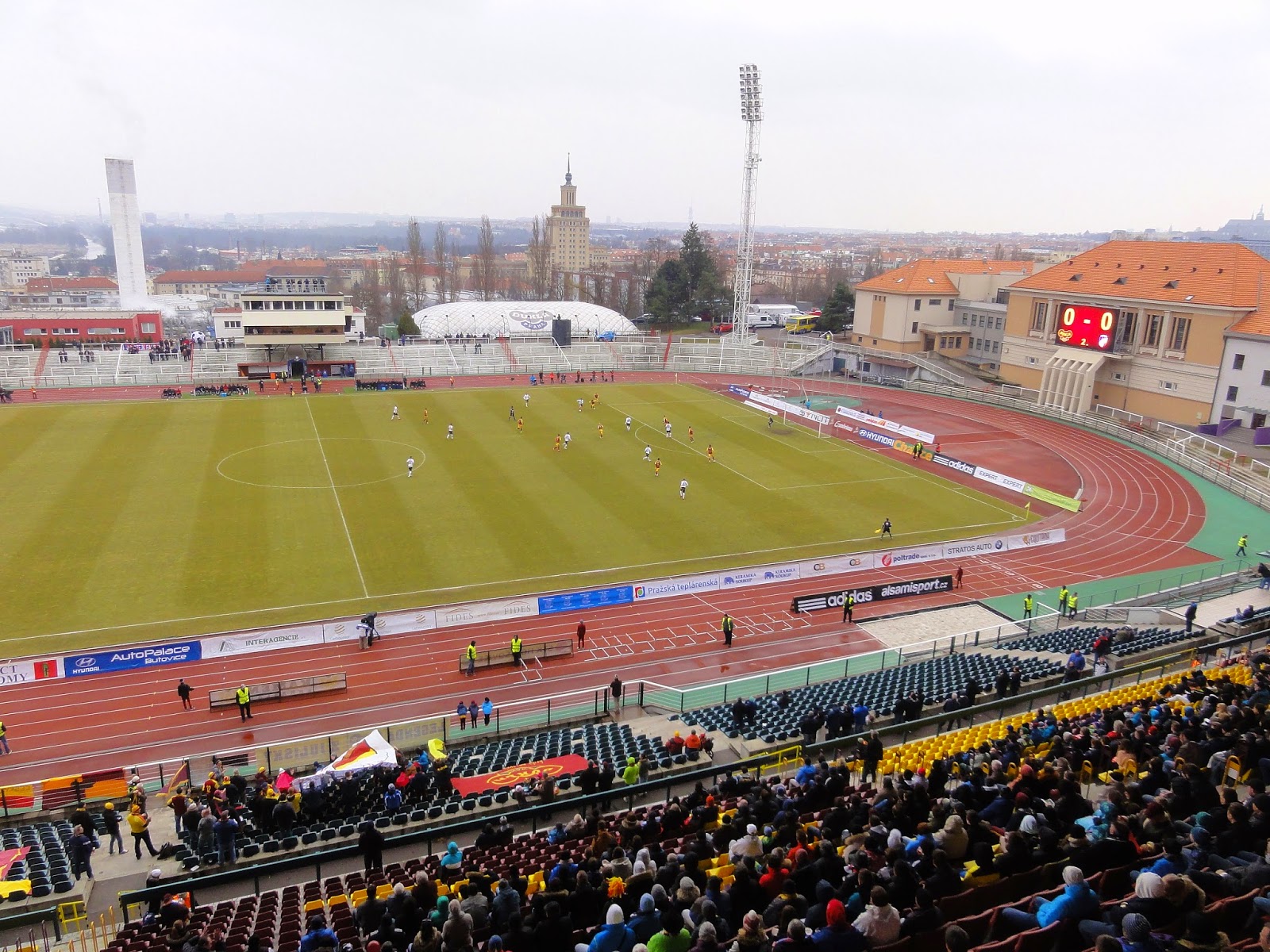 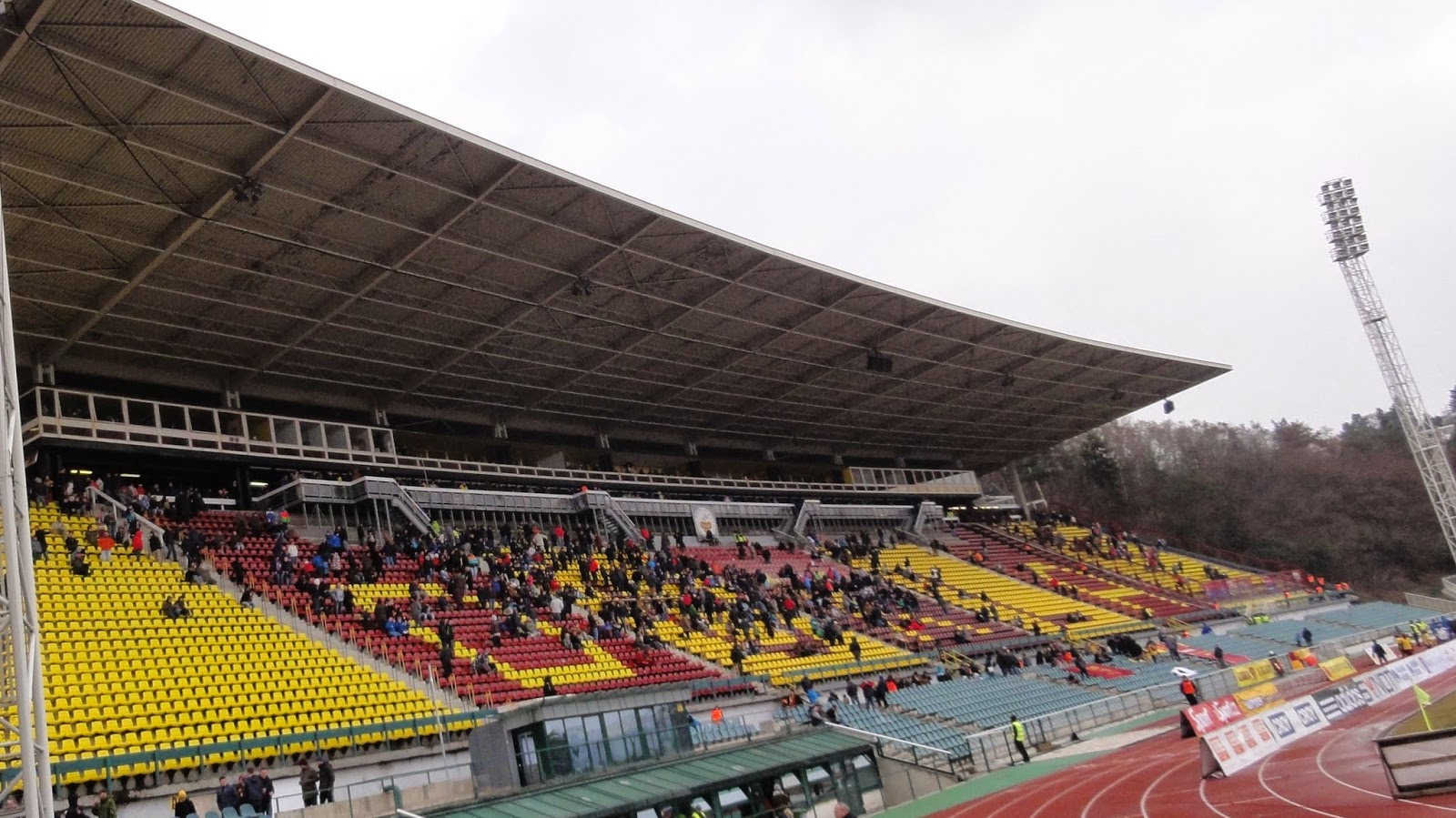 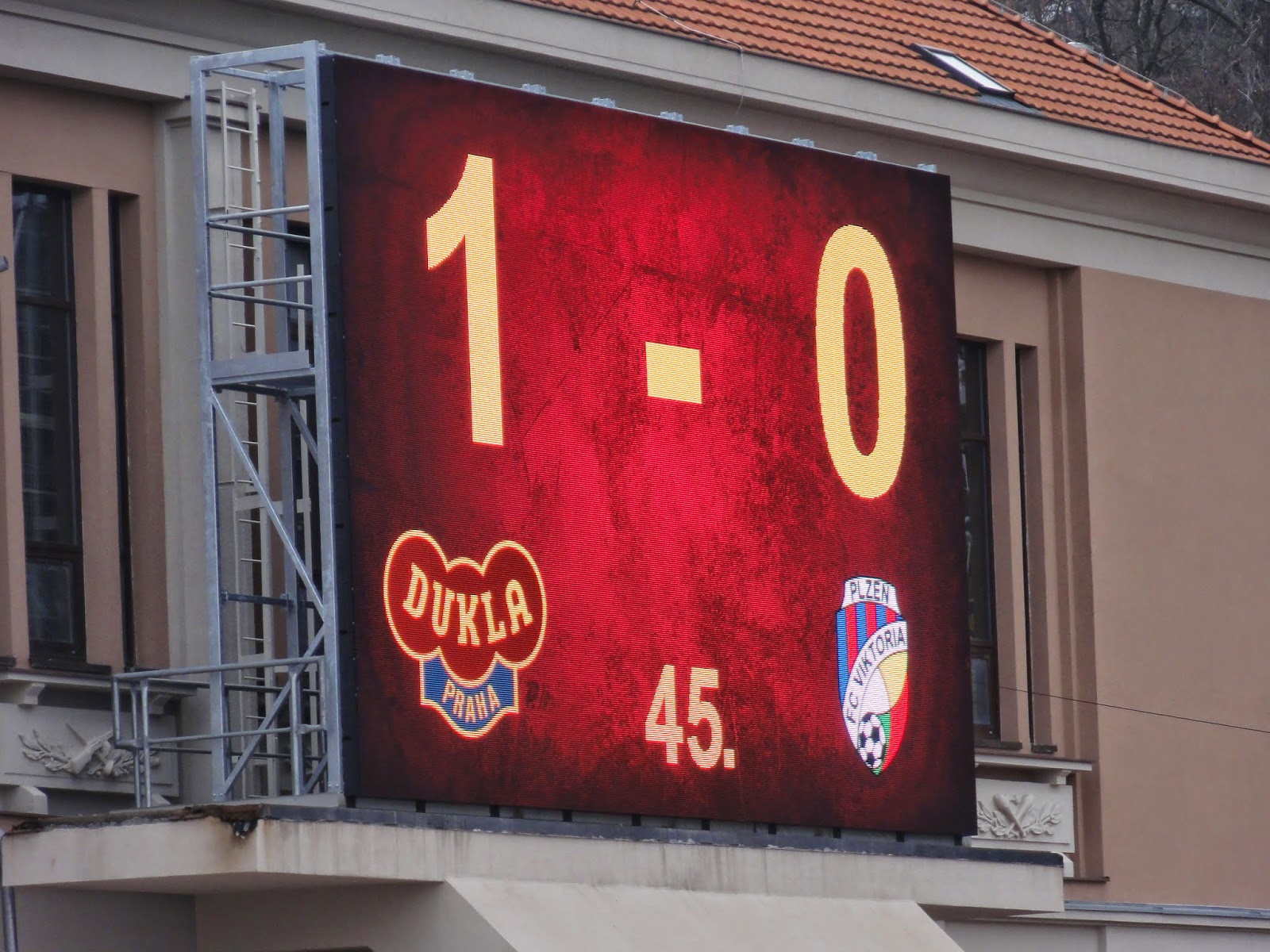 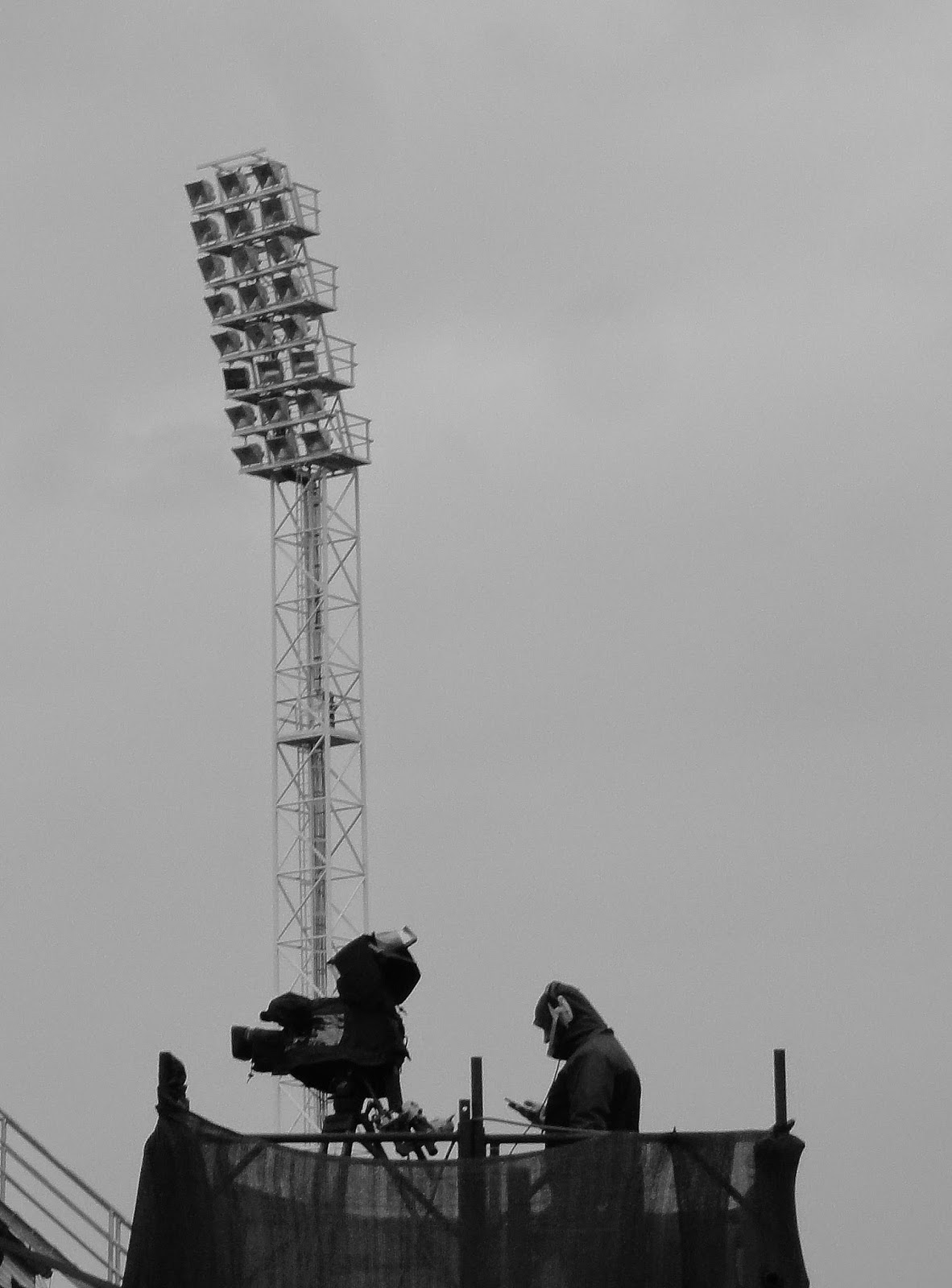 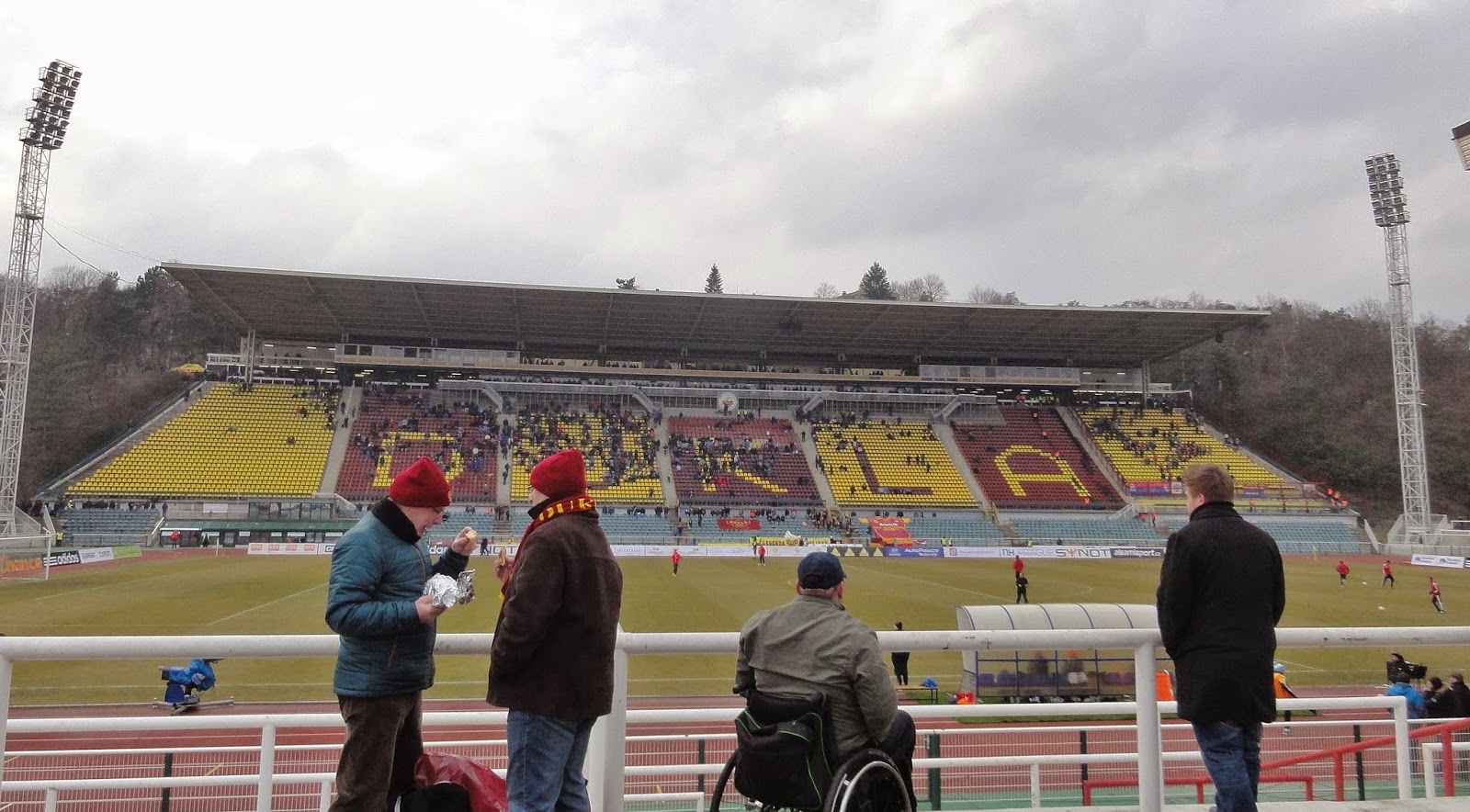 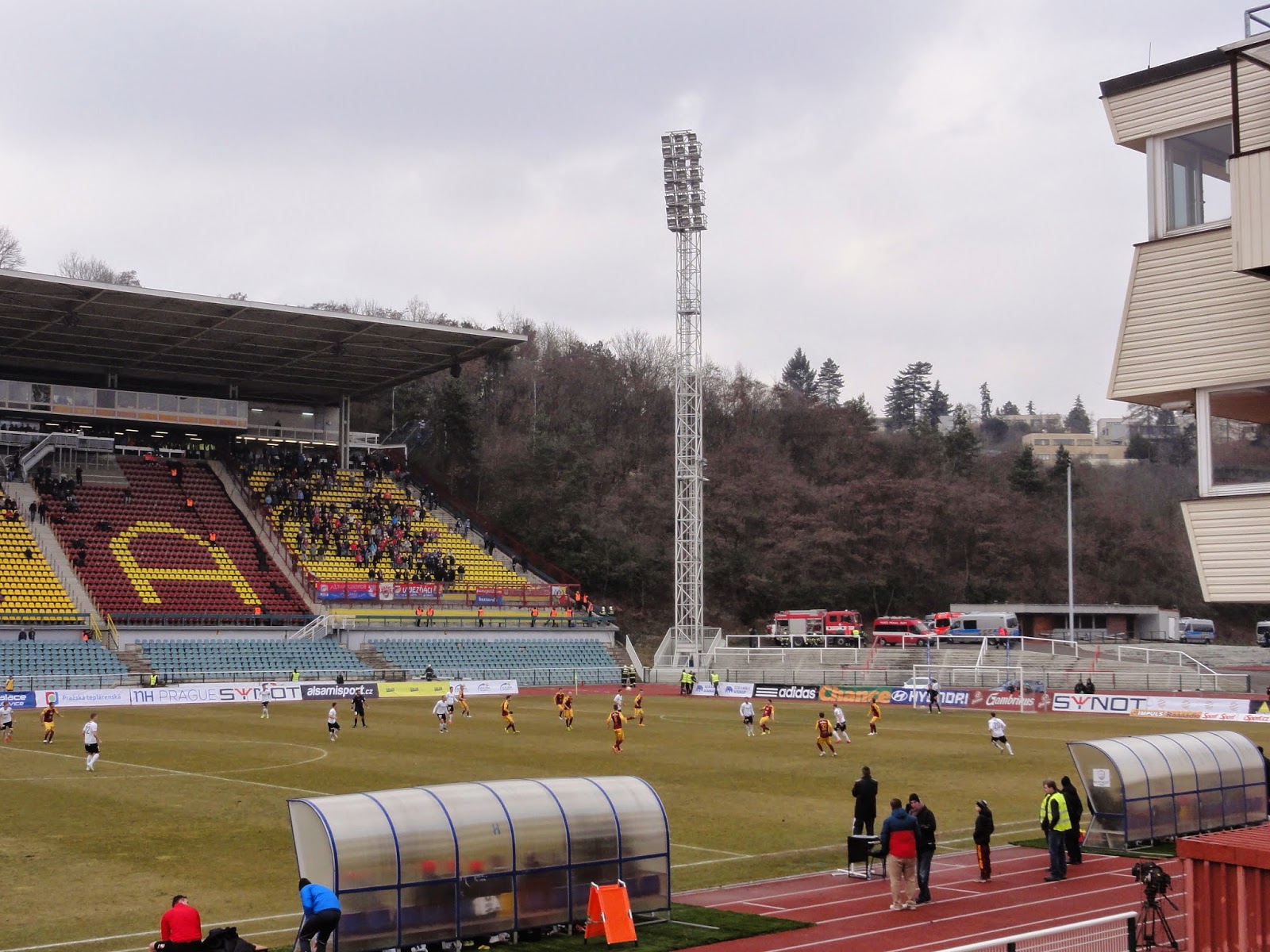 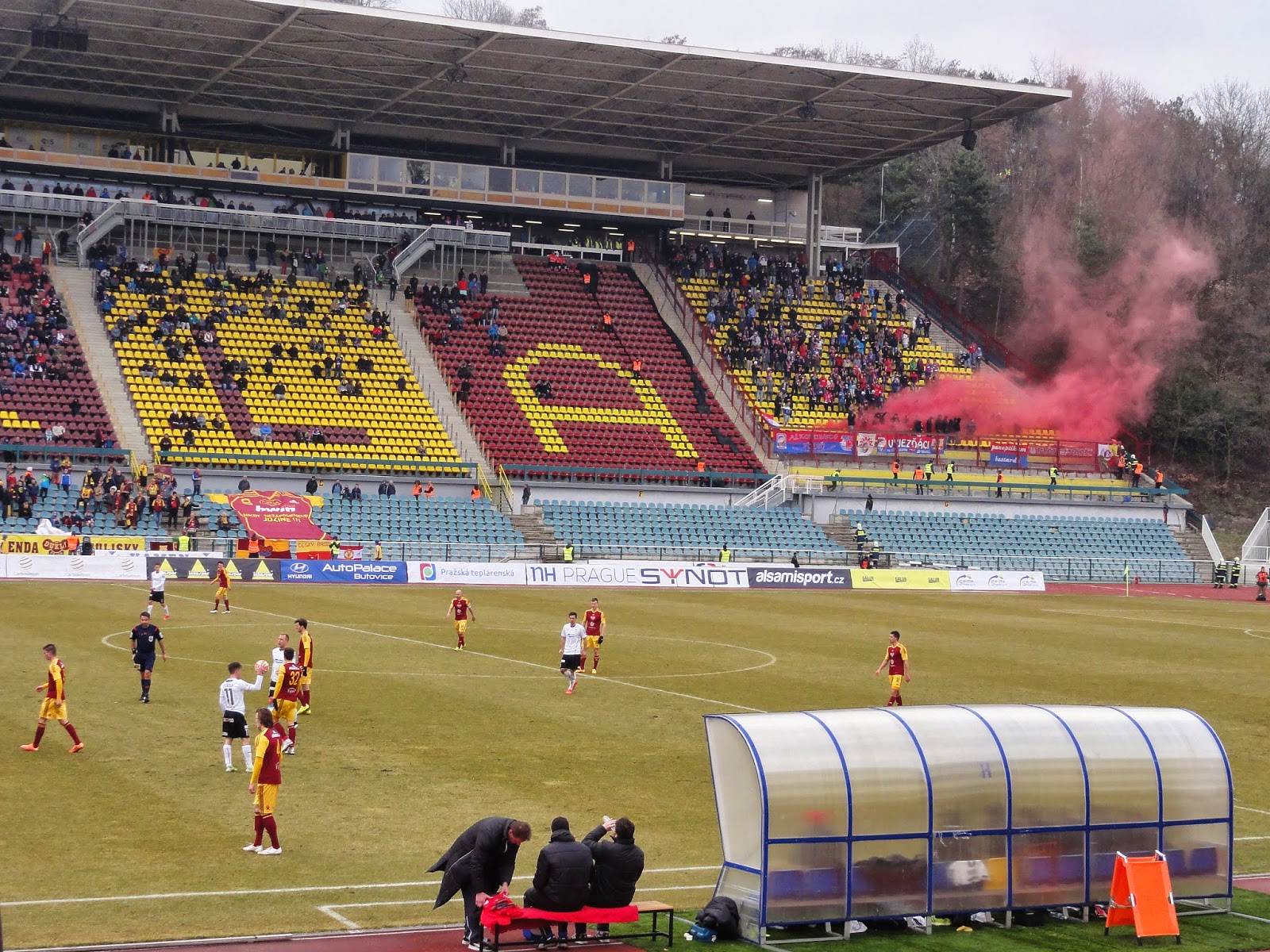 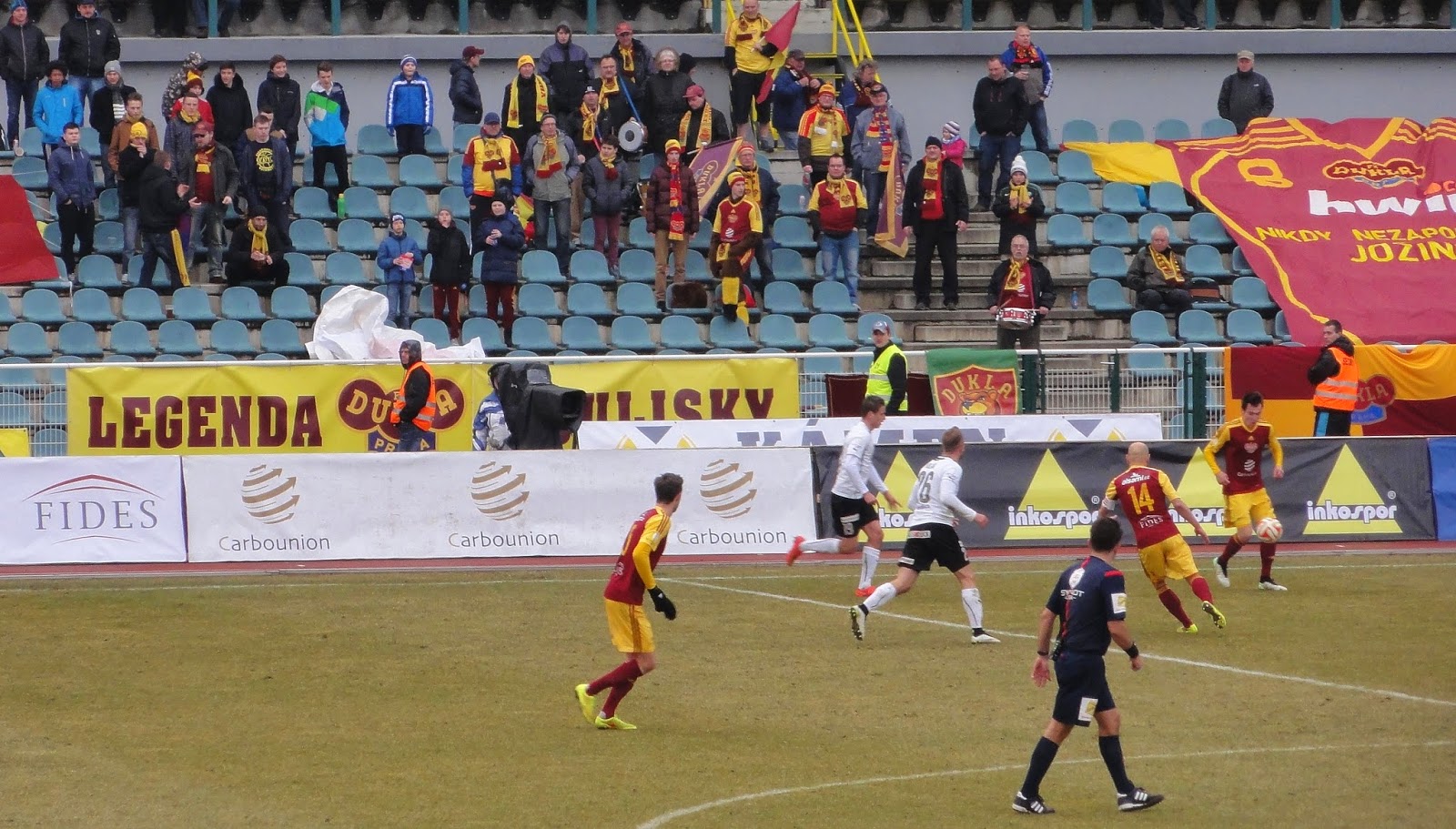 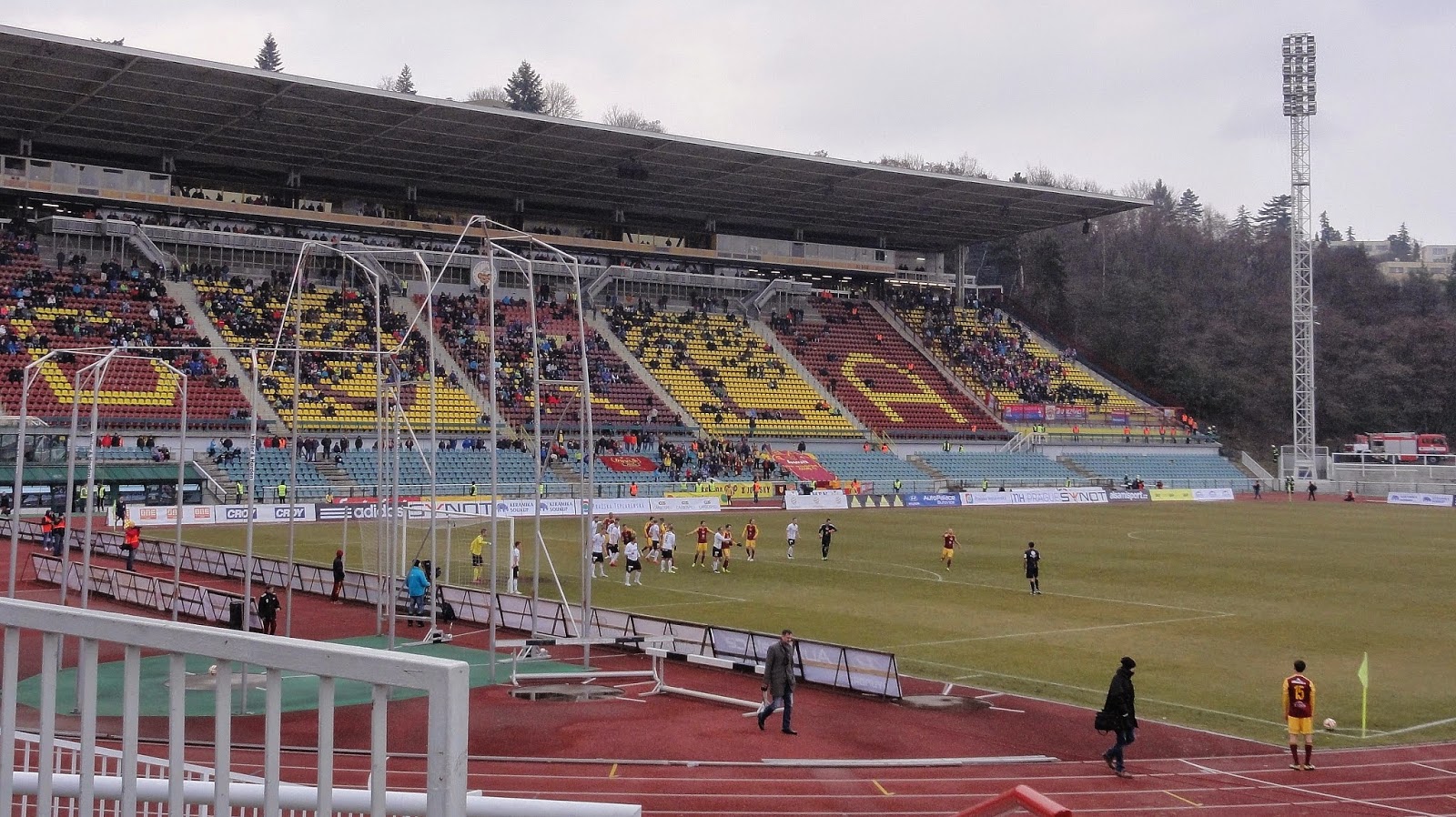